Unprecedented attack on the press: Over a dozen reporters attacked, intimidated during Delhi riots

Six journalists have been injured. At least as many have been harassed and abused.

So far, at least 20 people, including a policeman and an IB officer, have been killed. Around 190 injured people have been treated at the GTB Hospital alone, according to the authorities there. They include at least six journalists, one of whom was shot. Several reporters were abused and harassed besides, but escaped unhurt.

Akash Napa was shot by a mob on February 25

He was shot by a mob while he was reporting from Maujpur. He was admitted to the GTB Hospital. "The bullet is stuck inside and the doctors have said operating is risky,” his brother told Newslaundry. “He has been shifted to a ward and they are doing some tests.”

A journalist has been shot at while covering #DelhiRiots

He was reporting for JK24 from Maujpur in Delhi and has been admitted to GTB hospital.

This is getting way out of hand.

They were rounded up by a group of “CAA supporters” and beaten up badly. The mob circled Gunasekar and hit him in the face, according to NDTV. “A lathi was about to be brought down on his head when his colleague, Saurabh Shukla, intervened.” The lathi hit Saurabh instead. “He was also punched in the back and the stomach and hit on his leg… Arvind lost three teeth in the attack.”

Saurabh said the attack happened when they were shooting a religious place being vandalised and burnt at Gokulpuri. “I was just behind Arvind, 20-30 metres behind him. When we stopped recording, one protester, or one rioter for that matter, he spotted Arvind. They grabbed Arvind and started beating him up. I saw Arvind was lying on the floor. He was bleeding. I came for his rescue,” he said. “They were about to hit Arvind with a stick on his head. I intervened, and so that stick landed on my shoulder.”

Saurabh said the mob punched him and dragged him away from Arvind because they thought Arvind alone was filming. “Later, I did not show them my NDTV ID. I had a Foreign Correspondents’ Club card. I had shown them that and told them that I was not reporting for any Indian television; I was from some foreign agency,” he said. “They kept telling us, get Arvind to delete everything from his phone. And later, they did stop beating us up because they saw my name and said, ‘You’re from our own community. You should not be doing this. You should not be filming this.’”

Speaking to Newslaundry, Arvind recounted, “We saw a mob attacking a building [a Muslim shrine] at Meet Nagar, and we went there to shoot it. The group vandalising the building surrounded us. They started bashing me. They were shouting ‘Jai Shri Ram’ slogans. I was wearing a black shirt and they might have thought I was Muslim.”

Saurabh told the mob they were both Hindu, Arvind added. “By then, one snatched my phone. They demanded I delete the videos. When one said I had shot videos, they attacked us more. They let us go only after they deleted all the videos.”

She was with Saurabh and Arvind on Tuesday. She stayed with them when the mob attacked.

It was really brave of you @Runjhunsharmas.
You could have run when they asked you to but you stood with us till me and @Saurabh_Unmute were let off by the mob.
Journalists all out there, stand up and stand together.
United we stand, divided we fall. https://t.co/i12uaycXvY

“They beat him up,” she told CNN News18, referring to Arvind. “His mouth was bleeding…Even Saurabh was heckled by these men. He was beaten up. I was surrounded by these men. They kept asking us for our religious credentials…We had to fold our hands in front of them. We had to plead for several minutes to let us go.”

Ara, writing in Firstpost, recounted her terrifying experience reporting at Maujpur on Tuesday. She saw a Hindu priest instructing a group of men “to beat Muslims as an order had come from the top”. When she inquired about the priest, the group became suspicious of her, and asked for her identity. She’d to fake her religious background, hide her press card and dodge the question with a cooked-up answer.

But later, as Ara went inside one of the lanes, she was followed by some of the men from the group. She was stopped and asked, "Media se ho toh bolo na. Jhoot bolke humare pundit jee ke baare me kyun pooch rahi ho?” Tell us if you are from the media. Why are you lying and asking about our priest?

She was stopped a few more times by different men from the same group. “Those who had blocked the roads were carrying bricks, bats, lathis, sticks, rods, and axes,” she wrote. “On the roads of Maujpur, with no police or CRPF around and a charged-up mob, I was scared they would catch and harass me for being a journalist, molest me for being a girl, and lynch me for being a Muslim if they found out my identity.”

He was confronted by a mob at West Karawal Nagar on Monday. The mob assaulted him, snatched his phone and smashed his spectacles. His diary was taken away and thrown into a burning heap of bakery items. At different points, he was followed and surrounded by three different mobs.

“A man, seemingly in his 50s, removed my spectacles, stepped on them and slapped me twice for ‘reporting from a Hindu-dominated area’,” he wrote in the newspaper. “They checked my press card. ‘Shivnarayan Rajpurohit, hmm. Hindu ho? Bach gaye.’ Not satisfied, they wanted more proof whether I was a real Hindu. ‘Bolo Jai Shri Ram’. I was silent.”

Then, another group of people came after him. “They ordered me to run for my life. ‘Ek aur bheed aa rahi hai aapke liye (Another crowd is coming for you),’ one of them said. Shaking, I scampered to my bike. I rummaged my bag for the bike key. Every minute was precious. ‘Jaldi karo. Wo log chodenge nahi,’ said one of the men from the crowd. Finally, I found the key, and blindly set off through unknown lanes to the safety of Pushta Road,” he wrote.

In an article for Scroll, she described how a group of men stood chanting “Jai Shri Ram” and “Bharat Mata Ki Jai”. They warned journalists not to take photos or videos. Some in the mob even threatened to target the reporters.

She was threatened and harassed by a mob in the Maujpur area on Monday.

This is a riot! Protesters from both sides heckling & thrashing media persons. I was told "Camera band karle warna gaad denge yahin pe". All this while 10 men were holding me tightly from my waist & shoulders. Have never felt so scared! Camera person was pushed badly with lathis

Parvina was abused by a group of CAA supporters near the Maujpur metro station. She told the Print, “I was reporting from Maujpur metro station. I was reporting from a safe corner, and I was not alone. I could see pro and anti-CAA protesters clashing…Suddenly, a group of pro-CAA protestors singled me out. A group of five to six men came with wooden sticks and said maarenge. I had to sit there and plead with them to not beat me and let me go.”

Sir, I was attacked by pro CAA protestors for reporting facts. A group of men armed with sticks and bricks cornered me to hit me, I pleaded them and ran for my life

Not saying Anti-CAA protestors weren't in action but being a senior journalist how are blindly siding? https://t.co/5tIvIk2Xeo

On Monday, Chatterjee said that she was with a group of reporters that was stopped from reporting at Maujpur.

She told the Print that a mob supporting the citizenship law threatened to beat them. “They were saying Hinduon ki ladayi hai, humara saath dijiye, record mat kijiye, hum fass jayenge,” Chatterjee said. This is the fight of Hindus, support us, and don’t record all this. Otherwise you will be in trouble.https://twitter.com/sarkarshanta/status/1231959581389049857

Yes! I was on the ground where Pro-CAA protestors burned houses. Broke shops. Started pelting stones towards Anti-CAA protestors.

This was before Anti-CAA protestors reacted.

Reading your thread, I had to say it is far from the truth. Here in Maujpur since morning

She faced a hostile situation while reporting from Bhajanpura on Monday.

Sir
I was reporting from Bhajanpura today. PRO CAA Protesters happily chanted #JaiShriRam and pelted stones, bricks. They were attacking every man wearing a skull cap. Is this the time to take sides and flare up the existing communal fissures?

Among the journalists attacked, heckled and harassed on Monday was Anindya Chattopadhyay, a photographer with the Times of India. He wrote about his ordeal in the newspaper yesterday. Stepping out of the Maujpur metro station just past noon, he wrote, he was “taken by surprise when a Hindu Sena member suddenly approached me offering to put tilak on my forehead saying it would make my work ‘easier’. ‘You are also a Hindu, bhaiya. What is the harm?’ the man said.”

When Chattopadhyay tried to photograph a building that had been set on fire, a few men wielding bamboo sticks and rods surrounded him. They tried to snatch his camera, but his colleague, Sakshi Chand, stepped in, and the men went away.

But later, he wrote, a group of men followed him. A youth accosted him and said, “Bhai, tu zyada uchhal raha hai. Tu Hindu hai ya Musalman?” Brother, you are acting very smart. Are you a Hindu or a Muslim?

Chattopdhyay said they threatened to take off his pants so they could confirm if he was Hindu or Muslim. Only after pleading with folded hands was he let go.

They noted in a report that they were surrounded by a mob and chased by two bikers. “The mob surrounded our car. We managed to break free but then two bikers from the mob chased us. We escaped only after leaving the area,” Pillai said.

Srivastava, in the same report, stated that a mob threatened to thrash him unless he proved his religious identity. “They asked me if I could show anything to prove if I am a Hindu. I offered them my identity card but they insisted that I show them some religious thread, pendant or tilak to substantiate my claim. When I could show none, they asked me why I didn’t sport a tilak? They were armed with rods. They later let me go after some of their peers intervened and checked my identity card,” he added.

On Tuesday night, the Editors Guild of India issued a statement expressing “serious concern” over the attacks on journalists. “The Guild notes that journalists being attacked is tantamount to a direct assault on press freedom and those guilty of having indulged in such violence must be brought to book,” it read.

The Editors Guild of India has issued a statement pic.twitter.com/ezg28wgkb9 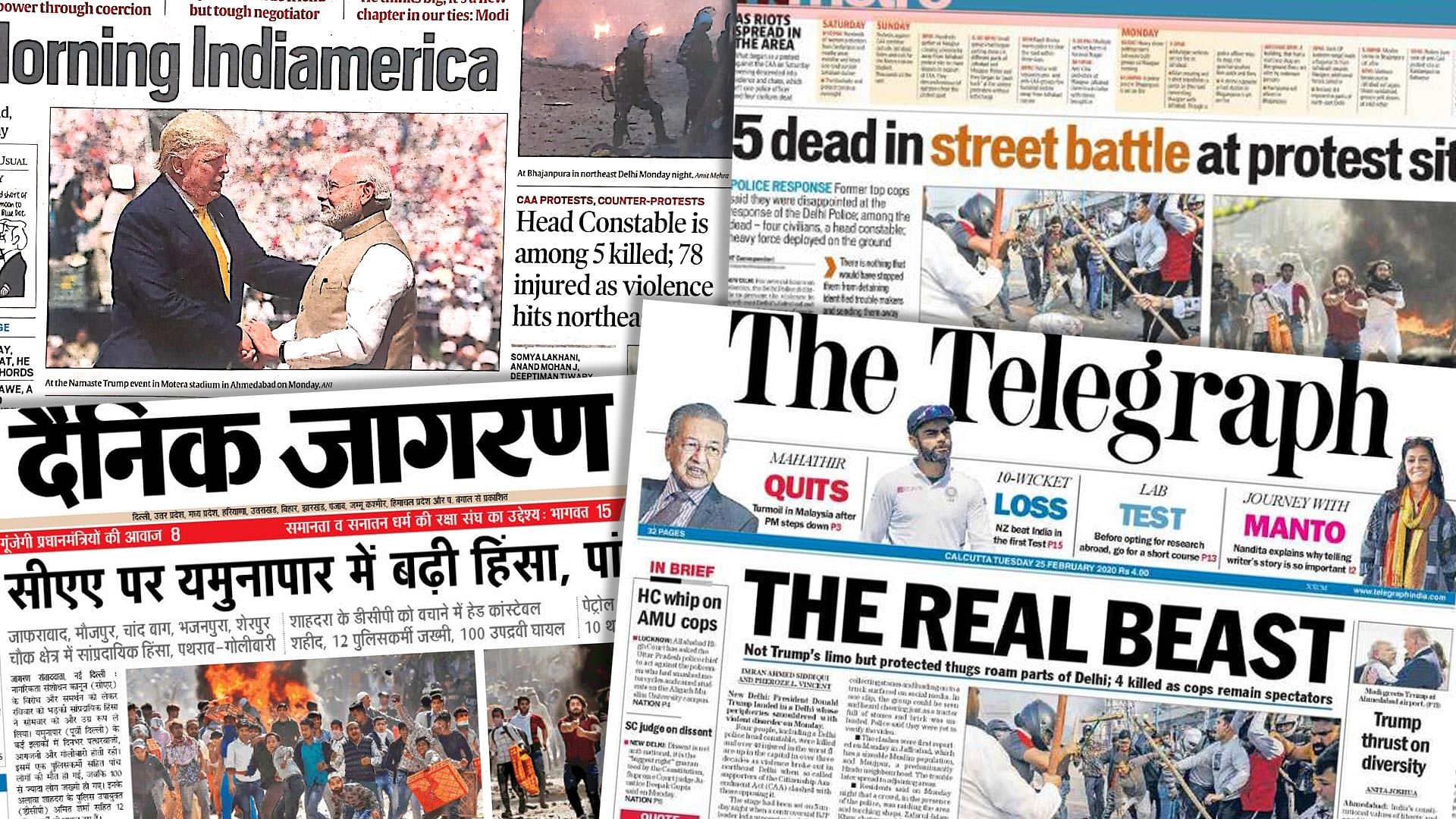