The Haldiram Snacks family and a British investment bank have acquired stakes in a zero-revenue company owned by Raghav Bahl and Ritu Kapur which in turn has taken over the couple’s Quintillion Media.

The virtual board meeting of Gaurav Mercantile Ltd that began over the video conferencing service Zoom at 4.30 pm on May 6 was unusually short. The board completed the formalities in just about half an hour, cleared a long-pending proposal, and dashed off an already drafted customary communique to the stock exchange.

The former ship-breaking company — based at One Indiabulls Centre in Mumbai's crammed business district of Lower Parel — with zero revenues on its balance sheet, took over a troubled media venture for an enterprise value of Rs 30.58 crore.

It inevitably raised eyebrows in media circles since Gaurav Mercantile is owned by the media baron Raghav Bahl and his wife Ritu Kapur. And what it acquired is the digital content business of Quintillion Media Private Limited, also owned by the couple, which runs the Quint news website.

The board meeting was short because it was preceded by an hour-long audit committee meeting of the independent directors where key deliberations had already taken place. Being a related party transaction, neither Bahl nor Kapur could participate or vote on the acquisition.

In the disclosure to the Bombay Stock Exchange, Gaurav Mercantile said this is a related party transaction and the acquisition will be done as a going concern on a slump-sale basis for a lump sum consideration. Slump sale is the transfer, in part or whole, of a business concern as a going concern, without values being assigned to the individual assets and liabilities.

The transaction is being entered at arm's length based on the valuation done by KPMG, a global accounting firm. The “arm's length principle” of transfer pricing means the amount charged by one related party to another for a given product must be the same as if the parties were not related.

The all-cash deal has been struck at an equity value of Rs 12.62 crore. The acquisition is subject to approval from shareholders.

BSE records show Bahl and Kapur took over Gaurav Mercantiles in early January 2019 when its share price was hovering around Rs 20-23. Since then, the stock has seen a steady increase and on May 7, a day after the deal was announced, it hit the upper circuit at Rs 262.50 a share, recording a spectacular 10-fold leap in a year. The company's market capitalisation has bloated to Rs 52.50 crore as of May 7.

Interestingly, the board had discussed a preliminary proposal to acquire the Quint exactly 10 months ago, on July 7 last year. And Gaurav Mercantiles had already altered its objectives to undertake media and entertainment business. The company said it altered the main objectives specified under the memorandum of association after obtaining approval from its shareholders through a postal ballot on May 12, 2019.

The reverse-merger deal announced on Wednesday will not impact the operations of BloombergQuint, run as a separate entity in a joint venture with Bloomberg, based out of the United States. It will continue as a subsidiary of Quintillion Media.

Strapped for funds, Quintillion Media is currently on a major cost-cutting drive. While layoffs at BloombergQuint were widely reported, a similar situation at the Quint hasn’t attracted attention yet. "At Quint too, several journalists have been told to leave the company while some sent on leave without pay for an indefinite period. The company plans to reduce Quint's strength from 230 to about 125," said a journalist at the news outlet.

The company has also slashed by up to 40 percent the salaries of all its employees at the Quint earning above Rs 75,000 per month. "They have a slab system of 10-40 percent depending on your salary, as now seen commonly in media companies."

Several experienced journalists such as Suparna Thombare, Roshun Povaiah and Vikram Venkateswaran are on their way out. "Barring four prominent verticals of Entertainment, Health, News & Politics, and Sports, all others are being shut down," said another journalist at the Quint.

This deal comes barely weeks after BloombergQuint shuttered its proposed TV venture and wrote off Rs 200 crore. Around a hundred people were laid off from the company then. With its three-year-old request for a broadcasting licence languishing in an ugly political slugfest, Quintillion Business Media, which had plans to operate a business news channel in a joint venture with Bloomberg, finally decided to shut down its TV division, leaving scores of journalists in the lurch.

In a statement on April 22, the company said it was refocusing its strategy towards digital operations: “BQ will be terminating its television division as its broadcast licence remains pending. It will now concentrate all its resources in building upon the early success of its award-winning premium digital subscription service, BloombergQuint.com, which is a market leader in India in the business news space.”

Is there anything murky about a ship-demolition company with zero revenues taking a rebirth as a digital media company, and stock price shooting 10 times in the span of a year?

Bahl retorted, "What is murky about it? It is all fully disclosed. It is an existing company which had no operations. We acquired it, went through the full process of an open offer. Everything including the preferential allotment has been fully disclosed. We sought shareholders approval for a change in the business of the company to digital media. We have followed the process of law.”

In the US, Bahl added, this is a developed model, called SPAC, which uses reverse listing or reverse merger to list operations. SPAC, or a special purpose acquisition company, has no commercial operations and is formed strictly to raise capital through an initial public offering for the express purpose of acquiring an existing company.

In May 2019, Gaurav Mercantiles issued a preferential allotment of Compulsory Convertible Preference Shares, or CCPSs, and equity warrants to promoters and identified investors. CCPSs are debt instruments that are compulsorily converted to equity shares of the company after a period of time or a milestone. An equity warrant is a certificate issued with a security that gives the holder the option of buying stocks at a certain price for a certain period. As per the disclosure of Gaurav Mercantiles, it raised Rs 8.5 crore through CCPSs and Rs 62.62 crore through equity warrants, both priced at Rs 42.50.

Once the warrants are converted into equity shares, the total preferential allotment cash raised will be nearly Rs 70 crore. Since the stock market regulator, Securities and Exchange Board of India, mandates conversion into equity shares within 18 months of the allotment, it will have to be wrapped up before December 2020.

"The funds will be used for acquisition as well as the ongoing operations," said Bahl.

So, was the deal aimed at quick and easy access to the capital market? "Clearly, that is what our stock exchange filing is all about," he replied.

Once the conversion into equity shares is complete, Haldiram and Elara Capital will hold a little over 25 percent stake in the company. In an article, VCCircle estimated that the Haldirams owners will hold around 17-18 percent of the shares and Elara Capital around 10 percent.

"We, as promoters, will maintain our stake pretty much close to what it's today," said Bahl. As of now, he and his wife collectively own 66.42 percent of Gaurav Mercantiles’ share capital. The public and other investors will hold the remaining, about five percent, post the warrant conversion.

The acquisition of the Quint will enable Gaurav Mercantiles to "reap benefits from the projected growth in the digital media business" going forward, the company’s communique said.

The board has also decided to go ahead with "certain identified material related party transactions" after the Quint acquisition is complete. The company, however, didn't clarify the type and size of the transactions, merely saying it will enter into separate deals after the news website’s purchase.

The board has raised the company’s borrowing ceiling to Rs 100 crore as well.

In addition, it has reclassified its former promoters (Bohra family & Bohra Exports Pvt Ltd) as “public” as per a request letter from them dated April 10. As per the company's shareholding pattern for the quarter ended December 2018, the Bohra family held a total of 66.42 percent. The company, meanwhile, informed the BSE that Mohan Lal Jain, the promoter of Gaurav Mercantiles, is a director on the board of Quintillion's holding company.

At the heart of the deal lie the careers of many journalists, who face a broken job market. As a journalist at the Quint told Newslaundry, "We don't know what's happening to our colleagues. Since we all work from home in this lockdown, I am not sure who all have been already axed from the payroll. It's a sad situation."

Another journalist said for those who still have their jobs, it is business as usual. "There is no operational change."

Of the people left, the majority are with the Quint’s English vertical and working out of Noida. The Mumbai bureau has a dozen journalists, and there are a few reporters in cities such as Kolkata, Bengaluru and Chennai.

In spite of several downfalls, Bahl, who founded the Network18 group in the early 1990s and built a media conglomerate with TV channels and digital properties, is known as a man of grit and determination. Towards the end of 2011, his company had accumulated a large debt and sought capital from Mukesh Ambani's Reliance Industries Ltd, which eventually acquired Network18 in 2014.

What's in store for Bahl now after a long rollercoaster ride in the media industry?

"Clearly, this will be the first pure play digital media company in India. All others are hybrid or legacy, digital, TV, etc,” he said, referring to the new-look Quint Digital Media. “In the last five years, we have built an excellent track record and terrific traction with the audiences. When the warrant money comes in, we will have a large pool of cash, making it zero debt. The operations will be near profitability. All of that adds up to what we want to do here."

Bahl called what he has built a "strong and healthy" organisation. "A large pool of the existing talent is very much there. We just have to continue to do what we are doing," he added.

The coronavirus pandemic has shown how precarious the media model that runs on ads, from governments or corporations, is. And how essential it is for the media to be powered by paying readers and viewers in order to remain free and independent. Support independent media by subscribing to Newslaundry, and pay to keep news free. 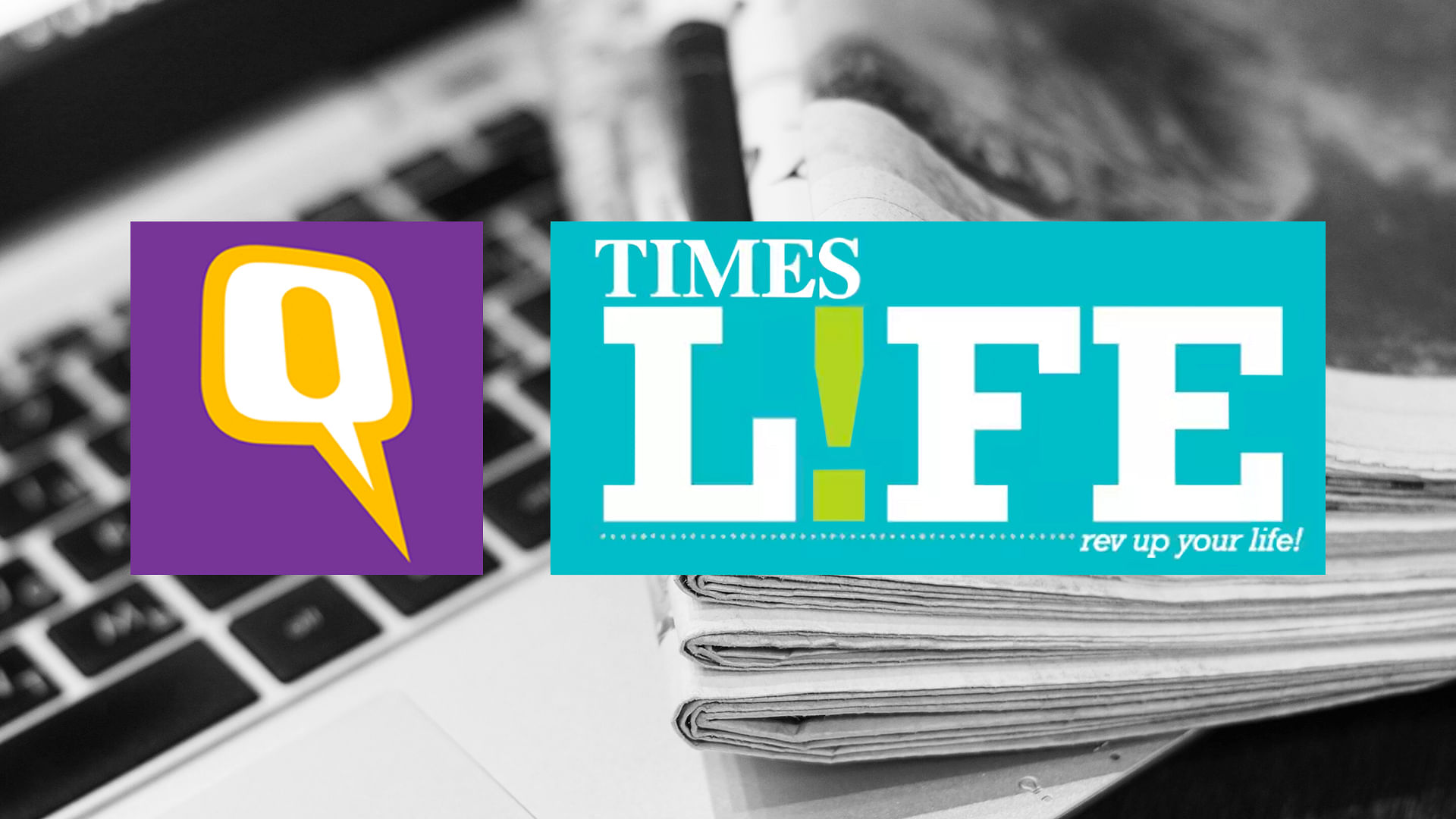