As HT Media lays off staff again, it may struggle to keep VCCircle afloat

The group has continued to cut costs, but the takeover may hike the company’s staff cost.

For HT Media, the takeover of Mosaic Media Ventures, which owns and operates VCCircle, looked ill-timed. A marathon board meeting of HT Media on November 27 last year, which began at 2.30 pm and went on for six hours, discussed threadbare, among other things, the final share purchase agreement it signed on November 9 with VCCircle’s promoter, the Rupert Murdoch-owned News Corp.

The HT Media board was in an unusual quandary. Revenues had nosedived during the first six months of 2020-21 and net loss had ballooned beyond its grasp. The group sacked several employees to cut costs since the start of the current financial year, and the last round of layoffs took place on Friday, January 15, 2021. While seven employees of Mint were given pink slips, many more from HT were believed to have received marching orders.

Apart from the ongoing scheme of amalgamation between six group companies, HT Media also had to deal with an unpleasant whistleblower complaint from an employee of its radio business, in the form of a nasty letter to the management on the employee’s last working day in August last year. He had alleged serious anomalies and deficiencies in the financial reporting processes of the company’s radio broadcast business.

The board was worried over the deepening financial woes during the pandemic. The management said it had been continuously evaluating the impact of Covid and had performed a sensitivity analysis based on current estimates in assessing the recoverability of financial and non-financial assets. Given the uncertainties, the management has been undertaking a continuous impact assessment.

Between July and September, it performed an impairment assessment of investment in subsidiaries too and recognised an impairment loss of Rs 17.6 crore against its investments in HT Overseas. It subsequently invested Rs 2.99 crore in its equity.

The deal with Mosaic Media Ventures, which was announced on June 29, 2020, was supposed to have closed by August end. The deal – a distress sale, by all means – now threatens to jack up HT Media’s employee costs, even if it is downsized further. The company’s plan was to “unlock cost and revenue synergies” through the acquisition. But the merger has clearly put an additional burden on HT Media, and is laying off its staff.

Will the quid pro quo pay off?

The merger has been anything but smooth.

Soon after the final merger announcement on December 2, there was a flurry of exits. Over a quarter of VCCircle’s 125-odd staff who moved to HT Media, has already stepped out in less than 45 days or been in the process. Among those who called it quits are the editor, chief human resources officer, sales head, marketing head, design head, legal head, and chief financial officer.

The chief executive officer, Jaideep Mehta, and chief business officer, Shalil Gupta, who Mehta inducted from his previous organisation IDC, have stayed put. An old hand at TechCircle, Snigdha Sengupta is now acting as the editor.

A person who was part of the transition process told Newslaundry that HT Media is probably in a hurry to help the acquired company achieve breakeven and possibly show some token profit in the first year itself.

“HT is trying every available trick in the book – including cost-cutting and pay rationalisation – to make the acquisition work,” he said. “They have initiated salary restructuring starting from the top, with a promise to shift the fixed pay to variable. For the staff, they have already initiated a 15-20 percent salary cut. The company is removing the duplication of work layers wherever they exist.”

He added: “In fact, most of the leadership folks were pushed out even before the deal was sealed on paper.”

HT Media has shut down VCCircle’s offices in Mumbai and Bengaluru and given its editorial staff the freedom to work from home. In Delhi, VCCircle has locked itself into a three-year lease agreement and the third year has just begun. So, some of the staff work from the office while the majority work from home.

“There are indications that when they want to get back to the old format, they will offer coworking space in Gurugram and Noida where most of the staff live,” said another source in HT Group.

VCCircle’s staff’s December salaries came via HT Media. “The News Corp money that was lying in the account has been adjusted and incorporated in the deal,” said the source. “News Corp was lending money for almost a year as advance for payments as they couldn’t infuse money into equity anymore.”

Ever since News Corp took over the company in March 2015, it had continued to bring in funds year after year. It infused Rs 68.9 crore over four years until June 2019, over and above the deal value of Rs 20 crore ($3.12 million at Rs 63 per dollar at the time). VCCircle: Two deals and a rollercoaster ride in between 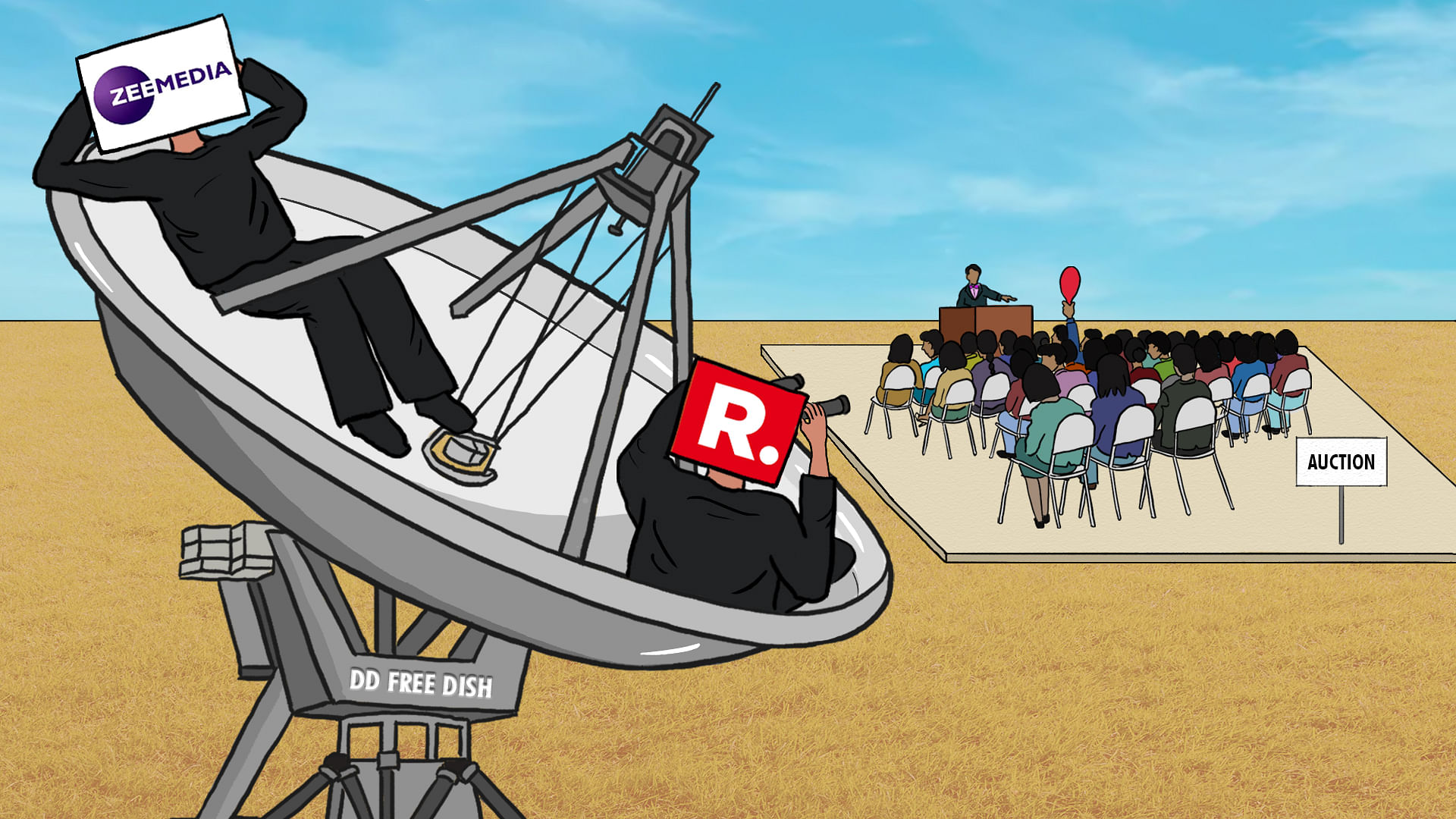 Soon after the merger, HT Media began the process of integrating the content. “Already, VCCircle content is being published in Mint – selectively, though,” said the source. “It looks like they may merge it with Mint in the long run.”

The merger temporarily propped up HT Media’s shares on the stock market. As on January 15, it hovered at around Rs 18 per share with a market capitalisation of Rs 414 crore.

The pandemic has nuked HT Media’s topline. In the first six months (April to September 2020), the total consolidated income dropped to Rs 541 crore – a fall of 53 percent from the previous six months. Advertising revenue plunged 52 percent and circulation revenue dropped by 34 percent.

The group reported a total loss of Rs 96 crore for the period from April to September last year, compared to its Rs 345 crore loss in 2019-20.

While the cost of raw materials and other expenses went up, HT Media managed to bring down its employee cost by a big margin through pay cuts and reductions in manpower. As a standalone company, HT Media showed a drop in employee cost from Rs 140 crore to Rs 96 crore in the six months between April and September, 2020.

While all the important segments of print, radio broadcast, and entertainment continued to bleed, the digital business reported a drop in losses. It dipped to Rs 14 lakh in the second quarter of 2020-21 (July-September) from a loss of Rs 3.94 crore in the same quarter of the previous financial year. This is primarily because of a minor improvement in revenues at Rs 21.3 crore, up from Rs 18.9 crore reported in July-September 2019.

HT Media said the whistleblower alleged anomalies resulting in deficiencies in certain financial reporting processes of the radio business. The letter sent by the employee on his last day in office forced the company to appoint an independent law firm to carry out an in-depth comprehensive review. It worked closely with two independent accounting firms.

In a statement, HT Media said the probe brought out practices indicating deficiencies and lapses during the financial years of 2017-18, 2018-19, 2019-20 and 2020-21. It apparently spilled the beans on a practice of pre-billing (billing and booking revenue for services yet to be consumed or delivered), resulting in reporting of higher revenues. There was also potential manipulation of debtor ageing (a tool used by small businesses to monitor the status of their accounts receivable) by issuing inappropriate credit notes and additional invoices to avoid higher provisioning for bad debts.

The investigation, however, did not reveal any personal profiteering or siphoning of funds, HT Media claimed.

In response, the management came up with an action plan that includes strengthening internal financial controls and systems, as well as centralising the revenue assurance function. It also involves a plan for the integration of IT systems used in the radio business and recommendations from the chief human resources officer to bring about changes in HR policies and practices adopting better ethical codes.

The audit committees had recommended strict action against the employees who erred. After long deliberations, the board on November 27 accepted the probe report, and claimed that it is in the process of taking appropriate steps.

In an emailed response to a query on action taken on the whistleblower complaint, HT Media’s investor team said the company has taken strict actions against employees who were found complicit of wrongdoing in the investigation.

The response said: "The management has undertaken certain steps to improve and augment internal control mechanism that can detect and prevent occurrence of any such anomalous practices in radio and/or other business. The company has taken special initiatives to strengthen governance mechanism. The company has also initiated initiatives to refresh its Code of Conduct policy & Whistle Blower Policy with detailed awareness programmes along with training programmes for employees and other stakeholders across the group including the subsidiary & group companies."