‘We’re 100% cut off from govt ads’: Is a Kannada daily paying the price for covering CAA protests?

The information department’s commissioner, PS Harsha, is reportedly unhappy with Vartha Bharati’s coverage of the CAA protests in Mangaluru. He was a top cop at the time.

But if you are a reader of Kannada newspaper Vartha Bharati, the advertisement would have been conspicuous by its absence. In fact, the nearly two-decade old newspaper has barely had any “display advertisements” from the Karnataka government since April 2020.

The newspaper has clearly brushed the wrong side of those in power, and it’s not the first time.

In 2017, a Vartha Bharati journalist was detained and served a showcause notice by the Dakshina Kannada police. The notice was later stayed by the Karnataka High Court. In the same year, Vartha Bharati’s social media page was blocked by Facebook. Though it was later restored, there was no clear explanation as to why it happened.

But it was after the newspaper’s coverage of the Mangaluru protests against the Citizenship Amendment Act, and the riots that followed, that media observers believe that there has been a systematic attempt to stifle its voice.

However, since April last year, Vartha Bharati is one of the only Kannada language newspapers that has been denied advertisements by the Karnataka government. The state government issued a total of 73 ads to other Kannada state level newspapers in the past year, routed through the department of information and public relations, or DIPR, headed by commissioner Dr PS Harsha.

In a letter to DIPR commissioner Harsha, Shivananda Tagadoor, the president of the Karnataka Union of Working Journalists, wrote, “It has been brought to our notice that Vartha Bharati has not been receiving ads frequently. As they are a part of the information department’s media list, it is not right to withhold ads from them. Please take due steps to resolve the said issue.”

Vartha Bharati was founded in 2003 in Mangaluru and is regarded as being a voice for the marginalised. With editions now in Shivamogga and Bengaluru, it’s read by over 10 lakh people everyday online and in print, according to theVartha Bharati management.

The newspaper currently has over 200 employees, of which 40 percent are Muslim.

Paying the price for CAA coverage?

In December 2019, following the passage of the Citizen Amendment Act by the Parliament, protests against the act broke out across the country. This included Mangaluru, where students’ groups gathered near the deputy commissioner’s office on December 19.

At 6.29 pm that day, Vartha Bharati was the first Kannada media house to tweet about the deaths of Nausheen Bengre and Jaleel Kudroli, who died as a result of police action during the protest.

Until then, the local police had downplayed the death claiming the two had only been grievously injured and were undergoing treatment at a hospital. The police even named Jaleel and Nausheen in an FIR for their involvement in the protest.

At the time, the Mangaluru commissioner of police was PS Harsha.

The police chief did not officially confirm the cause of death, merely stating that civilians who had been injured were under medical observation. On December 21, Harsha held a press conference, where he gave evasive replies when questioned on the police excesses.

Vartha Bharati, however, had already confirmed the news through “firsthand accounts”.

“Our reporter witnessed the death, interacted with the family, and spoke to the medical staff,” said a highly placed source familiar with the matter. Vartha Bharati covered the deaths in detail; see their exhaustive coverage here.

Importantly, the newspaper was well networked across the coastal district of Dakshina Kannada and Udupi district. As a Bengaluru journalist explained, “For the entourage of independent, state and national media entering the city over the firing incident, Vartha Bharati served as a point of contact to reach the victims and their families, and file ground reports..."

Reporters even used the internet at Vartha Bharati’s office to file stories, the journalist added, since the protest was followed by a clampdown on mobile internet.

“The city police, including Dr Harsha, soon saw through the pattern and held it against Vartha Bharati editors for not toeing their narrative,” a Vartha Bharati staff member said.

Eleven months after the shootings, Harsha was transferred as police commissioner to take on a new role as commissioner of the DIPR. Until the shootings, he had enjoyed a cordial relationship with journalists in Mangaluru. But it was clear that he was unhappy that Vartha Bharati’s reports, among others, had led to his transfer.

“When golibar [shooting] took place in Mangaluru, most newspapers reported a limited narrative. Vartha Bharati went ahead to expose the role of Harsha and how the police fired at innocent protesters,” said Praveen Shetty, a Vartha Bharati subscriber and media observer. “That’s why, as the commissioner of the information department, he has been withholding every single ad.”

For instance, Shetty said, when former chief minister BS Yediyurappa’s government completed two years on July 25 this year, Kannada daily Hosa Digantha ran several full-page government ads. Other newspapers, including Prajavani and Vijaya Karnataka, had three pages of ads on July 26, or at least a half-page ad. “But not even a single ad for Vartha Bharati,” he said.

While this might have been written off as an isolated incident, it soon became a repeated occurrence, according to Shetty.

“It is clearly not the government’s decision,” said the source familiar with the matter. “As the people’s voice, we have criticised the BJP, JDS and Congress governments since our inception. With the exception of a couple of instances, political parties do not retaliate through financial discrimination. But here, we are 100 percent cut off from ad revenue. This action clearly comes from the DIPR office since they do have some autonomy on deciding which newspaper gets advertisements.”

A senior government official at the labour department told this reporter that they had referred Vartha Bharati for their ads. However, the source said, this was overruled by the DIPR.

‘An attack on press freedom’

Government advertising plays a major role in subsidising the cost of printing and distributing news at Vartha Bharati. Since 2005, private advertisers have migrated to digital platforms. Further, the pandemic and subsequent lockdown severely affected private businesses and their advertising budgets for newspapers.

“Only a subscriber fee is not sufficient to meet the cost of print media,” said the source. “So, the government’s support for free speech of the press becomes extremely significant for the operation of a news bureau.”

The newspaper made repeated representations at Harsha’s office, but with little or no result.

According to a Dakshina Kannada-based senior BJP leader, state legislators had met with Vartha Bharati in early 2021. Curiously, while empathising with their issues, the BJP leaders had told them that there is more to the advertisement embargo than meets the eye.

The BJP functionaries alleged that the police action in Mangaluru on December 19 had been backed by Kalladka Prabhakar, a senior RSS leader. Hence, they said, Prabhakar supported Harsha’s decision to block ads to Vartha Bharati. The senior leaders told Vartha Bharati’s delegation that they would not be able to convince Prabhakar otherwise.

When contacted for comment, PS Harsha said, “I don’t want to comment on this. Please talk to Vartha Bharati editor for more details.”

SG Siddaramayya, a writer and former chairperson of the Kannada Development Authority, told this reporter he had written to chief minister Bommai about the withdrawal of ads from Vartha Bharati.

“Vartha Bharati is listed as one of the state newspapers of Karnataka,” he said. “It is supposed to receive ads from the government as per the directives laid out by the information department. However, IPS Harsha withholding the ads from the newspaper is wrong and is an attack on press freedom.”

Siddaramayya said that being an IPS officer, one should take orders only from the government. “If he is taking orders from any non-authorised person or organization, then it is highly condemnable and action must be initiated against him,” he said.

The source said, “We did not start our newspaper to promote any individual, political or ideological objective nor to make revenue. We will continue to publish news as long as we are independent or else there is no relevance for us being called a newspaper.”

To make up for the loss of revenue from government advertisement, Vartha Bharati is currently requesting willing readers or patrons to contribute. The newspaper said it doesn’t want to put stories behind the paywall. “We only request the government not to suppress free press, assure non-discriminatory advertisement policy and they must compensate us for our losses,” read a statement from its management. 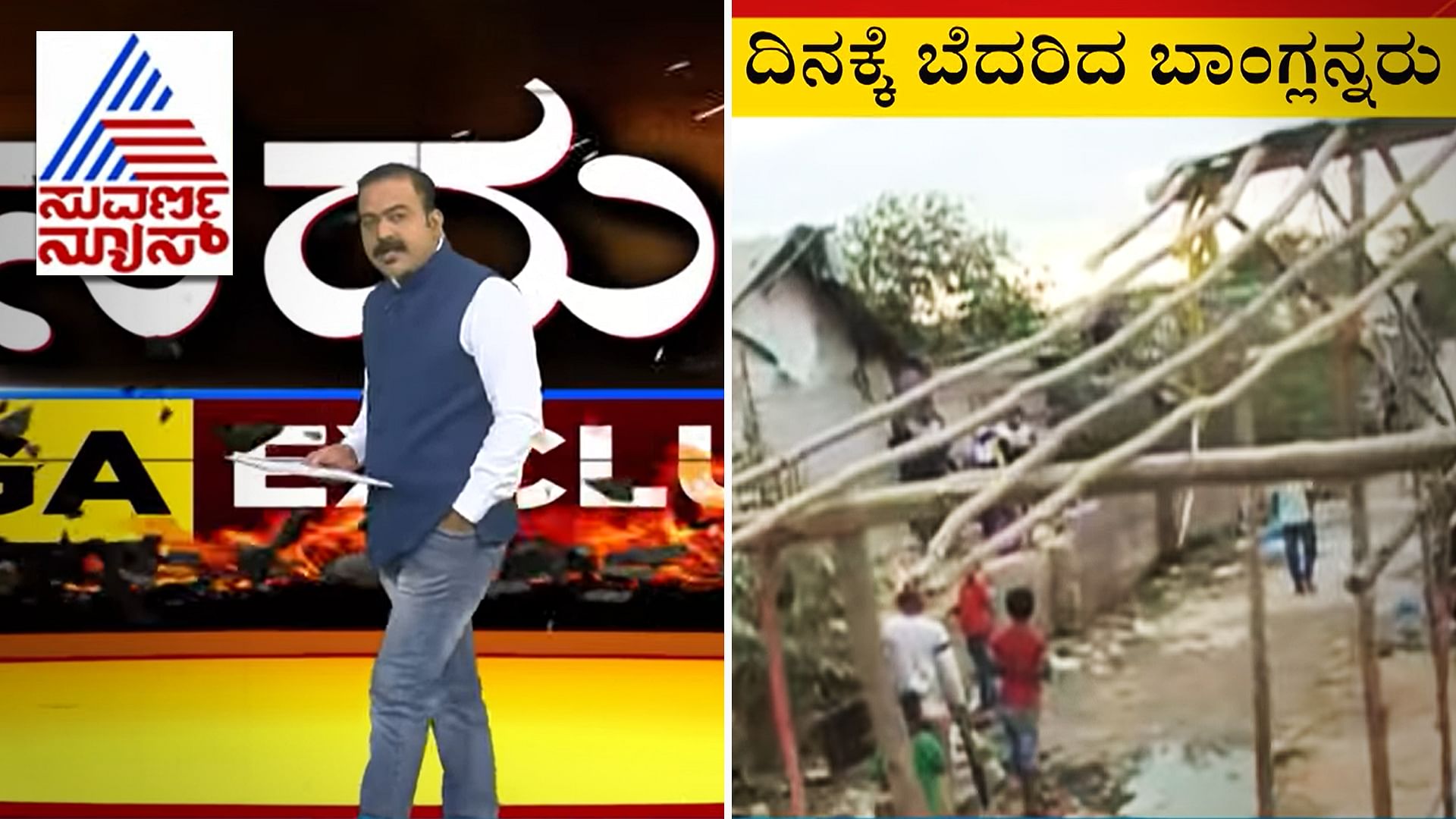