Yet advertisements for Yogi Adityanath’s government consistently appeared in their pages.

On September 29, a Dalit woman from Hathras, Uttar Pradesh, died in Safdarjung Hospital in New Delhi. She had been allegedly raped by four Thakur men on September 14 in a field near her home. On September 30, her family said, the 19-year-old’s body was forcibly cremated by the authorities.

Social media is now peppered with hashtags such as #YogiResignNOW, #HathrasHorror and #JusticeForHathrasVictim. Many posts, including those from celebrities, have named the woman, though naming a rape victim is a crime in India.

Yet, in the two weeks preceding the woman’s death, there had been radio silence on the incident from two leading newspapers in the area. The Lucknow editions of the Times of India and the Dainik Jagran did not deem it newsworthy enough to carry in their pages, let alone the front page.

It was only a fortnight later, when the woman was shifted to Delhi, that reports appeared in both newspapers.

Here’s a rundown of both newspapers’ coverage, or the lack of it, on the Hathras rape, from September 15 onward.

Apart from their deafening silence, both papers had something else in common: they carried multiple half-page and full-page advertisements for the Uttar Pradesh government in their Lucknow editions during this time period. There might not have been space for the Hathras rape, but there was enough room for Yogi Adityanath’s smiling face.

The first mention of the case in the Lucknow edition of the Times of India was on September 29, on the woman being shifted to Safdarjung Hospital from Aligarh a day before. It was a single report split across Page 1 and Page 7, with barely 40 words on the front page.

On Page 7, it was, rather questionably, placed next to a story on a youth who killed 11 pigeons as “revenge”.

On September 30, the morning after the woman died, the newspaper carried three reports and a cartoon. One report appeared on the front page under an update on the Sushant Singh Rajput case, perfectly encapsulating the mainstream media’s priorities.

On Page 10, the cartoon, rather ironically, depicted the victim’s mother questioning the media about the lack of attention paid to the case. “Her tongue was cut, spine was broken. What happened to you?” the victim’s mother was shown asking a group of media persons who had turned their backs on her.

The second and third reports in the newspaper on the rape also appeared on Page 10. One was devoted to political reactions, and the other was solely focused on Bollywood’s responses on Twitter.

Cynthia Stephen, a Bengaluru-based independent journalist and gender and development policy analyst, told Newslaundry that she’s unsurprised by the kind of reportage that the incident received.

“I expected nothing more from them [mainstream media]. It is just more of the same pattern of ignoring of Dalit lives, realities and issues,” she said. She added that this is indicative of the “passive support” extended by these media houses to “oppressive structures of society”. “It’s a cop-out,” she said.

It’s worth mentioning that on September 15, a day after the woman was allegedly raped, Page 4 of the Lucknow edition of the Times of India carried a story on a gangrape case in Uttar Pradesh’s Sitapur. On September 16, 21 and 25, the newspaper reported on other cases of gangrape across the state on Page 4 — but never on Page 1.

Similarly, eight lines on a gangrape case were relegated to Page 7 on September 26 and to Page 6 on September 28. The placement of the September 28 story was particularly egregious, appearing above a story on a python swallowing a calf.

Unlike the Hathras case, none of these cases pertained to rape perpetrated by dominant castes on marginalised communities.

It carried its first report on the incident on September 30 in its Lucknow edition, after the woman died in Delhi. The story appeared on Page 1 but was sidelined by a story on the Ayodhya verdict. The headline on Page 1 merely said the woman had died. The story continued on Page 7 and included the photographs of the four accused.

It is also worth noting that while Jagran’s Lucknow and national editions both carried the story on their front pages on September 30, the piece in its national edition was longer and more detailed. While the national edition’s headline referred to the death of the victim as a “lost war”, the Lucknow edition merely said the victim died in Delhi.

It should be pointed out that Dainik Jagran has a Hathras edition. The Hathras rape did not make its front page until September 28. Until then, sporadic reports appeared, first on Page 6 on September 15, and then on Page 4 on September 19, when the Akhil Bharatiya Valmiki Mahasabha met police officials to demand justice for the victim. Between September 21 and 22, two reports appeared on Page 6 in the context of protests and Bharatiya Janata Party politicians meeting the family.

On September 26 and 27, the inside pages of the Hathras edition had reports on arrests in the case. Finally, on September 28, when Bhim Army chief Chandrashekhar Azad criticised the police’s incompetence and met the victim in hospital, the story appeared on the front page.

On September 30, when the victim died, the Hathras edition reported the story on its front page, continuing on Pages 4 and 5. The story was under an overarching headline “beti”, or daughter, signifying the larger rhetoric used to make crimes against women relevant in a patriarchal society — by identifying a victim in relation to a man, as a mother, sister or, as in this case, a daughter.

“The idea of using a male derivative to legitimise the woman’s position in society is where part of the problem lies,” said Vineet Kumar, a Delhi-based media critic and author of the book Mandi Mein Media. “It is this kind of identity attribution that reinforces patriarchal hegemony.”

He predicts that in the next few weeks, as India goes into “festival mode” with Diwali and Dussehra, the rhetoric surrounding the case will see a shift in metaphors and identifiers, from maa and behen to goddesses and devis. After that, it will be forgotten. Media institutions are extremely uncomfortable with talking about women’s issues, he added, and often use language and perspectives that are “anti-women” or “anti-citizen”.

“Incidents like these will always be forgotten because they are not matters of everyday concern for the papers. And neither are such issues followed up by them,” Kumar continued. “There is no public pressure to force the mainstream media to change this pattern of merely chasing trends. The reportage of such incidents is limited to evoking only sympathy in readers and not concern, and the difference between the two is crucial.”

Anil Chamadia, a journalist and media teacher, pointed out that no other outcome could be expected from either Times of India or Dainik Jagran, given their predominantly upper caste reader base and no connection, editorially or otherwise, to marginalised sections of society.

The role that such kind of reportage plays, he said, is in reinforcing the dominance of caste and class in society.“In 2006 I conducted a survey of 37 national media newsrooms, and not one of them had a Dalit or Adivasi in the top editorial ranks and I see no change even today,” Chamadia said. “Media always echoes and represents the dominant class and caste in society.”

But why wouldn’t the Hathras edition, at the very least, put the incident on its front page?

“This is because of the lack of moral responsibility that local reporters feel towards reporting an event, as editorial satisfaction and readership appeal is all that they are after,” Chamadia said. “There is no sense of social responsibility anymore because there is no space left for it in this opportunity-motivated and content-driven form that journalism today has taken on.”

With advertisements and government pressure dictating the rules of the day, journalist Cynthia Stephen thinks we’re on a path towards the mainstream media making itself irrelevant, with no credibility. Change is possible if it’s driven by the consumer of news.

“We need to put our money where our mouth is and support and uphold independent journalism,” she said.

Chamadia agreed, saying: “I already see a rejection of the media, both electronic and print, by the people. But hope for change in both of them is a distant dream because it requires completely doing away with the current hierarchical societal structure of caste.”

Kumar said the larger fight isn’t an improvement in the media, but a fight to “reclaim a male-dominated society”.

“While we may believe that we are headed towards a progressive society, the reality is revealed in these incidents,” he said. “We are in a situation that is worse than pre-Independence India because back then, we at least had hope that education and freedom would lead to a progressive society. However, today, even though mainstream newsrooms are led by educated people, the perspective, space and language used for women and their issues, especially marginalised women who are doubly oppressed, still remains the same as the colonial period.” 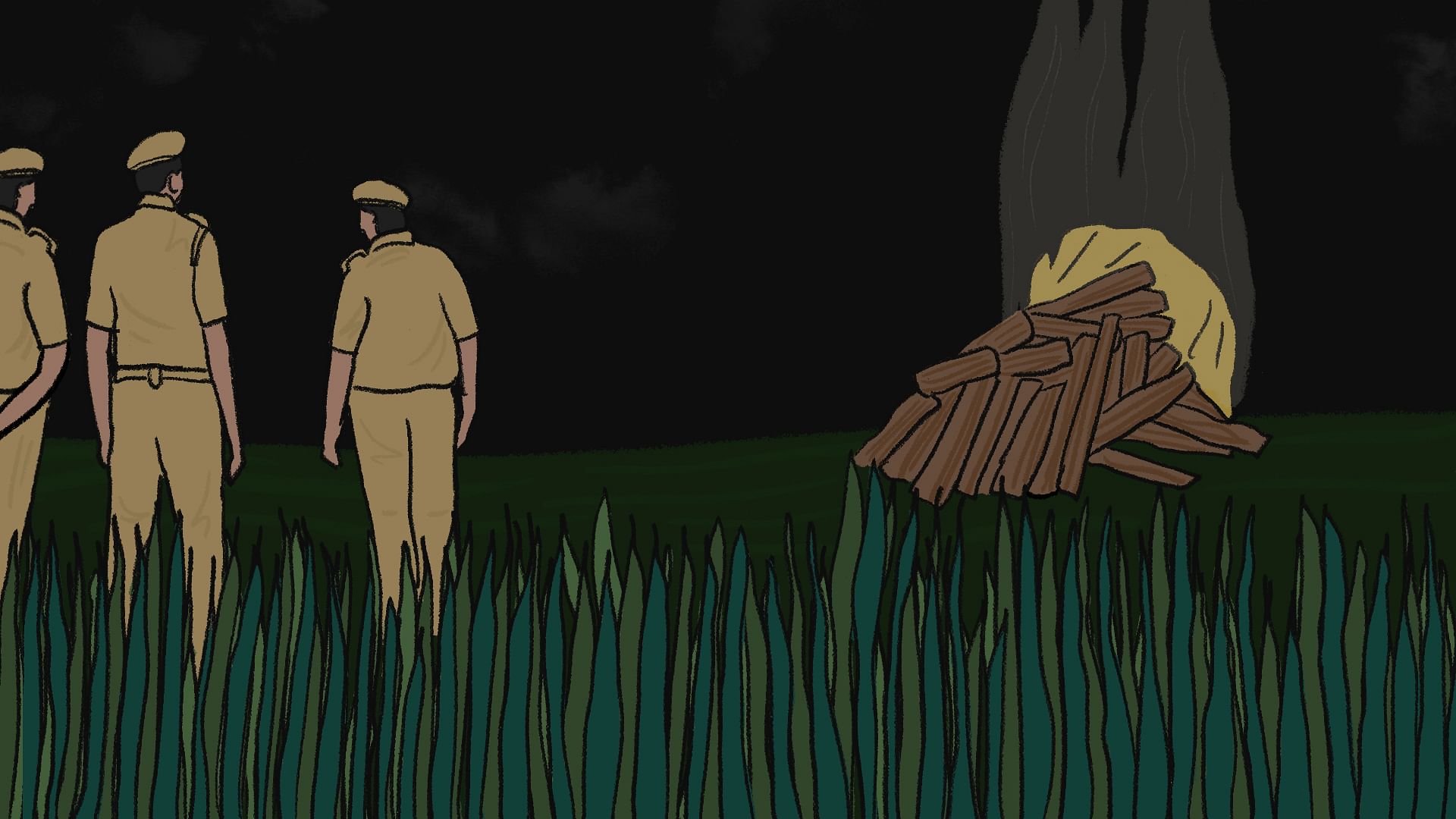