And with that succinct statement, my career in Indian television was over before it had begun. I remembered that moment clearly the other day while reading Kalpana Sharma’s column on how we all report conflict.

The TV reporter I was speaking to was not trying to be either nasty or ironic. He was a friend and just stating the facts about Indian television journalism. In fact, he worked with one of the networks I considered to be a fairly good one. It must have been around 2006 or 2007 and I had been based in Kabul for three or four years by then.

Even before I arrived in Kabul in 2003, I had 13 years of experience in reporting on politics at the state and national level. I had reported on post-conflict Punjab and on Kashmir in some tumultuous years. I had covered elections and parliament, some ministries, and some local beats. I knew several editors. And while I knew freelancing would never be a cake walk, as the sole Indian journalist living in Kabul, I expected there would be some interest in my reporting from Kabul.

How wrong I was.

Most of the Indian media I approached had very limited interests: Pakistan’s role and terrorism, the Indian government and its strategic interests, and the Indian community – by which they meant Afghans who were Hindu or Sikh. These were valid stories and I did them. I did stories on the popularity of Indian TV serials and reported on the bombing of the Indian embassy in 2008 which had taken the lives of people I knew.

I wrote stories about Indians working in Afghanistan – in the hotel industry, in restaurants, in the UN, and in international NGOs. I wrote about an Indian firm rebuilding Serena hotel where my friend and AFP journalist Sardar Ahmad and his young family would be killed two years after I left Afghanistan. I wrote stories about Indians setting up the country’s telecom network.

But I didn’t think they were the only stories to be told about Afghanistan.

Being in Afghanistan at that moment in time seemed an enormous privilege. The country was being rebuilt brick by brick, both literally and metaphorically, and I was there to witness it as a journalist. Vast areas of the country had been bombed to pieces over the past decades and also, more recently, during the US military intervention that ousted the Taliban. The economy had been shattered. An entire generation of Afghans had grown up less educated than their parents.

I was energised by the idea of trying to capture this through reporting. Every single question, however mundane, had a fascinating dimension. My first foray into Afghanistan was with a clunky satellite phone. How would telecom be installed when you couldn’t lay landlines in a country so deeply mined? That was a story. How would you replace the deeply devalued currency of a country? That was a story. How would you restore democratic polity? Conduct elections? What would parliament look like? How would Kabul, a city designed for 700,000, deal with the influx of returnees swelling to a population of over 5 million? That and that and that were stories.

But Indian TV channels who called me up only wanted blow by blow accounts of the latest bombing and the rising body count.

Violence was still a large part of daily life in Afghanistan and escalated over time. It was not that I did not think that the daily events of violence were not important. Even at a personal level, I knew life and death were a matter of being in the wrong place at the wrong time. Several places I frequented had been attacked. The compound next to ours – we shared an adjoining wall – was a guest house for UN election staffers and they were attacked in their beds one night and the house set on fire. We were not home but returned to bullet holes in our walls and the constant sight of a blackened burnt compound next door where five had lost their lives. I never felt completely safe thereafter.

I reported on the violence but I wanted to report on processes not events, the important distinction Kalpana Sharma made in her piece. How was the war on terror being conducted? How was the region responding to Afghanistan? Why were the Taliban not following their own code of conduct in war? Why were the international forces supporting the government being allowed to get away with high rates of “collateral damage” in air strikes? By how much were civilian casualties being underreported?

There was little appetite for such stories. While the Indian media was spectacularly disinterested, I also found it hard to publish stories about context and process in the international media. In all my time in Afghanistan, only one magazine – Himal Southasian – consistently allowed me to report on Afghanistan as I saw it, and I wrote for them even though the costs of reporting were more than they could pay. I finally moved to Kathmandu to work with them when I left Kabul.

As I view the reporting on Afghanistan in the Indian media now, I can see that much has changed. There are many more independent outlets which was not the case even one decade ago. There is much more empathy in some of the ground reports I have read from accomplished reporters.

But while much has changed, much more remains the same.

Screaming about terror forms a bulk of reporting on TV, and an entire country and its people is viewed (by a large portion of the media) solely through the lens of Pakistan. The images of desperation at the airport cannot but hold our attention and evoke horror. But where are the stories of the humanitarian crisis unfolding in the country: the under-funded humanitarian appeal, the Covid crisis likely to be exacerbated by the violence and crowding, the internally displaced? Where are the stories on how the humanitarian agencies are operating? What about the drought declared by the country in June? And while there has been some good reportage of the current situation, especially in Kabul, how long will Afghanistan hold any interest?

Or will it disappear once again, as it did during the last 20 years when there was much less focus on the rights of women because of the regime change; little reporting on the night raids and the “kill or capture” operations resulting in civilian casualties because these were being conducted by the “good” guys; little attention on how parliament was pushing back against some provisions of universal human rights because the parliamentarians were from those opposed to the Taliban; and almost no reporting on the thousands who were still desperately fleeing the country, dying not at airports but in perilous crossings at sea with richer nations holding them at bay?

In my time in Kabul, I covered the transitional justice process in detail. I attended searing public hearings of testimonies of victims. I saw how women from different communities came together, through theatre, to a recognition of shared pain. I tracked the political processes and elections, I mapped the turn which saw the hope of the early years of the intervention fade away. How was health going to be provided in a country of difficult geographical and social terrain? Why was the World Bank fudging the facts about health coverage? I tracked the reality behind some of the feel-good narratives.

I travelled to Panjshir to report, but also went there on picnics. I reported on incredible initiatives on contemporary art by young Afghan women, on tourism returning to the Wakhan corridor, the question of how one builds an audience for music when a generation has grown up without it, on young filmmakers learning the craft to capture their reality which, until then, had been told largely by outsiders. I managed to write many stories but very few for the Indian media.

In no way does all this suggest I was an outstanding journalist whose every story deserved to be read. Many of my stories must have been below par, a few repeated tired tropes that make me cringe when I read them now. But I had learnt much while reporting on Punjab and Kashmir and I learnt much through eight years of reporting from Kabul.

I started making a living from writing for regional and international outlets, but what I really wanted was to contribute a different perspective – Indian, regional, in the Indian press. I would approach Indian editors I knew who seemed to have a more capacious vision of journalism only to be told, “We are interested in the Indian angle.” I would try and meet them on my visits to India to persuade them to consider my stories, arguing that Afghanistan was being covered only by reports from international wire agencies and a different approach could be interesting. One crusading editor told me dismissively to get in touch if I found Osama bin Laden – it wasn’t as funny as he thought and he didn’t use my stories. Another told me my stories had to have an interesting angle, the example being that of a man biting a dog. I remember one story which, when it appeared in print, had all paragraphs not containing the word “India” excised.

I was still intent on having a voice in the Indian media. That’s when I reached out to my friend at the Indian news channel. I suggested that instead of calling me for body count stories, they could call me for providing context and commentary on events they covered, even if the only events they wanted to cover were that of violence. I offered to do this for free, knowing they wouldn’t pay me anyway.

That’s when my friend recounted his conversations with his editors, telling me not unkindly: “Terror sells.”

Eventually, I started being a little more assertive about what I would and wouldn’t do and that ended any hopes of a consistent presence in the Indian electronic media. Print would go on to publish a handful of pieces in my eight years living there. In my last conversation with a hyperventilating TV journalist, I finally asserted my right to be free of this reductive cycle of “terror-only reporting”.

“I am not a bomb blast bimbo,” I said, to an unusually stunned silence at the other end.

All photos by Aunohita Mojumdar. 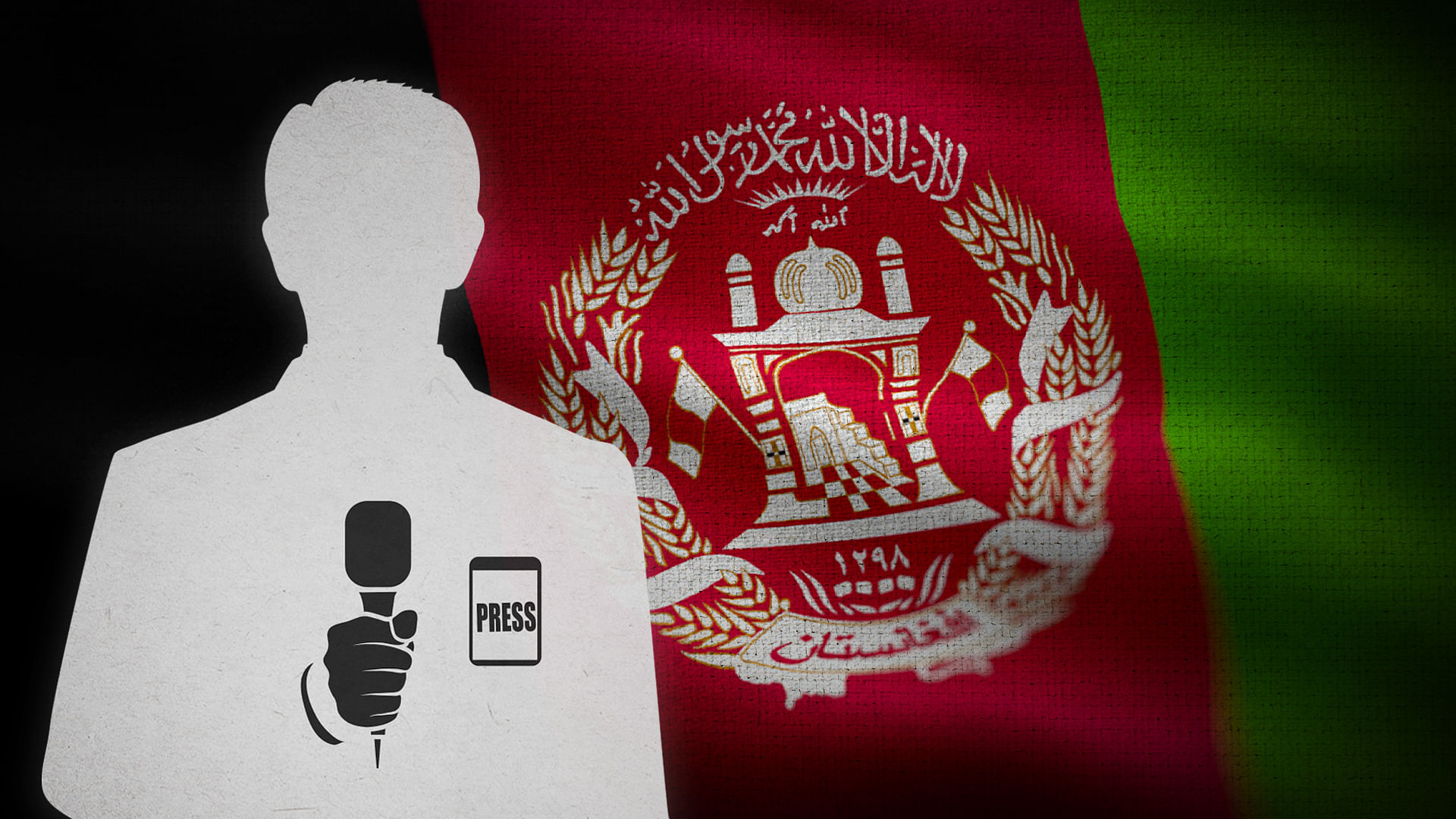 ‘They left us alone in the 21st century’: What journalists in Afghanistan are saying about the crisis