Banking on BJP’s development, will UP’s deputy CM be able to wrest control of Sirathu?

Welfare schemes have helped some locals, but they want bigger issues like unemployment to be addressed.

With a little over a week to go for polling day, Kesaria village in Uttar Pradesh’s Sirathu is festooned with posters of prime minister Narendra Modi, chief minister, Adityanath, and Keshav Prasad Maurya – UP’s deputy chief minister, the BJP candidate from Sirathu, and a son of the soil of Kesaria itself.

A cement road leading to the village is heralded as a symbol of “development” under the BJP, while stickers on doors proclaim “poori hui har aas, ghar-ghar aaya vikas”. All hopes have been fulfilled, development has reached every doorstep.

There’s a sticker on the door of Shankar Lal’s kuccha house too – an irony considering he applied for a pucca house under the Pradhan Mantri Awas Yojana, but still hasn’t heard back. Lal, 80, also recently applied for an old age pension but refused to pay a bribe, he said, so he hasn’t got it yet.

“Those who are genuine beneficiaries are deprived of their due,” he told Newslaundry.

Sirathu, located in Kaushambi district, is one of three assembly constituencies – the other two being Manjhanpur and Chail – in the district that will vote on February 27. The BJP won all three seats in 2017, and has now fielded Maurya from his home turf instead of Sheetla Prasad, the sitting MLA.

Sirathu has about four lakh voters, comprising around 1.5 lakh scheduled caste voters, 72,000 Muslims, 46,000 Patels, 30,000 Yadavs, and 16,000 Brahmins. Maurya will be up against Pallavi Patel from the Apna Dal (Kamerawadi), who is also the sister of union minister Anupriya Patel. Pallavi Patel has been campaigning on promises of education, health and employment.

Meanwhile, in 2014, the BJP came to power in the state with its promises of development. But the residents of Sirathu, whose voting choices will seal Maurya’s fate, want more.

Welfare, but not enough

A few metres away from Shankar Lal’s house, Shanti Devi, 60, sat under the sun with her neighbours. The conversation soon moved indoors, where a calendar bearing Maurya’s face hung on the unplastered wall.

“Press the button in front of the lotus symbol,” the calendar read, “and ensure victory in large numbers.”

Similar calendars and other campaign material hang across homes and shops in Kesaria.

When asked who she would vote for, Shanti replied promptly, “For those who have given food to me.”

“Modiji and Yogiji,” she said.

Shankar Lal outside his kuccha home.

Shanti Devi, 60, with the calendar bearing Maurya's face behind her.

Shanti and her husband get five kg of rations per month under the Pradhan Mantri Garib Kalyan Yojana, launched by the central government in 2020 during the pandemic and extended to March 2022, with an eye on the upcoming election. She also gets 35 kg of foodgrains under the public distribution system.

But all is not well with Shanti. Her husband owns three bighas of land where he cultivates wheat, and their crops are often destroyed by chutta pashu, stray animals, and often cows. Shanti and her husband are helpless because not only is cow slaughter against the law in UP, but so is putting the life of a cow in danger.

The couple has also been trying to get a toilet, Shanti said, and has applied multiple times for it. They currently defecate in the open, which is difficult in their old age. While she’s built a makeshift seat with a flush behind her house, there’s no sewage connection.

“We have dug a hole in the ground and fixed a toilet seat and now use it as a latrine,” she said. “What else can we do? We are poor and can’t pick up a fight.

But some homes in Kesaria are better than others. A row of around 500 houses, which locals call the “mohalla of Mauryas”, was built in the village, about 90 percent of which are equipped with toilets. Rushma Devi, 45, was allotted one of these houses in December under the Pradhan Mantri Awas Yojana – the culmination of 10 years of effort to try and get a home under various government schemes. “I have endured a lot, madamji. For the last 10 years, I have been pursuing this,” said Rushma.

Rushma does not own any land so she depends on the free rations every month for sustenance. She works as a midday meal cook at the village’s primary school and is paid Rs 1,500 per month, though the salary is often “delayed by months”, she said.

“The last time I got a salary was around Diwali,” she said.

On who she’ll vote for, Rushma remained cryptic. “Where others are voting, I will also vote for that person.” But she hopes the new government will set up factories in and around Sirathu so her two sons, who currently work as tailors in Mumbai, can find employment here and earn “decent money”.

Kesaria resident Bipin Kumar, 22, is a welder but he’s been out of work since the lockdown began in 2020. Since he was a child, he’s seen Maurya visit the village and now, he blames him for not doing enough for the youth.

Rushma Devi says she struggled for 10 years to get a house.

Bipin Kumar, a welder, has been out of work since March 2020.

“There’s someone from among us in the party, but he is not concerned about us. Then for how long can we keep thinking about him?” Kumar asked.

He’s also unimpressed by the free rations initiated by the Modi government, saying the government focuses too much on welfare schemes instead of bigger issues like unemployment. Kumar said, “Even if they give gas for free, how will one manage to give Rs 900” – the current price of a cylinder in Sirathu – “if there is no earning?”

‘We will vote against them’

About 200 metres away from Maurya’s residence in Kesaria is a basti, with choked drains and unpaved roads.

Nanki is a daily wage labourer who lives in the basti. She earns Rs 250 a day. While she was allotted a house under the Pradhan Mantri Awas Yojana, she had to spend Rs 4,000 of her own money to construct a toilet. She also said she’s eligible for a monthly widow pension but hasn’t received it.

“I have not made up my mind yet,” she said on which way she plans to vote on February 27.

Others are more decisive. Dilip Kumar Saroj and Buddh Ram, both in their twenties, worked in Ludhiana until the lockdown in March 2020 forced them to return to Sirathu. They claimed they, as with “many labourers”, never received their dues from their factories before they left.

“I had to walk on foot from the Ambala border,” Buddh Ram said. “There’s no work here. Just recently, we heard that Maurya’s son doesn’t want us to rear pigs. So, we will vote against them.” Rearing pigs for pork is a source of income for Dalits in the area, but upper-caste Hindus have pushed back against it.

Saroj added, “We have made up our mind that this government should be routed completely.”

Maurya’s test in this election is made harder by the rumours of his “rift” with chief minister Adityanath and the recent exit of several OBC leaders from the party. The BJP is trying to consolidate its non-Yadav OBC vote bank which, according to Firstpost, has risen from 18 percent in the 2012 assembly election to 74 percent in the 2019 Lok Sabha poll. The recent exits may dent its chances, but it’s too soon to tell.

Abrar Ahmed, a resident of Gulamipur village, told Newslaundry he was Maurya’s classmate in school for three years. Ahmed is critical of the BJP’s recent Islamophobic comments, such as Adityanath’s “80 vs 20” remarks in January. But Ahmed said Muslims in Sirathu have voted for the BJP because of Maurya alone.

With inputs from Dilshad Ahmed. Pictures by Akanksha Kumar. 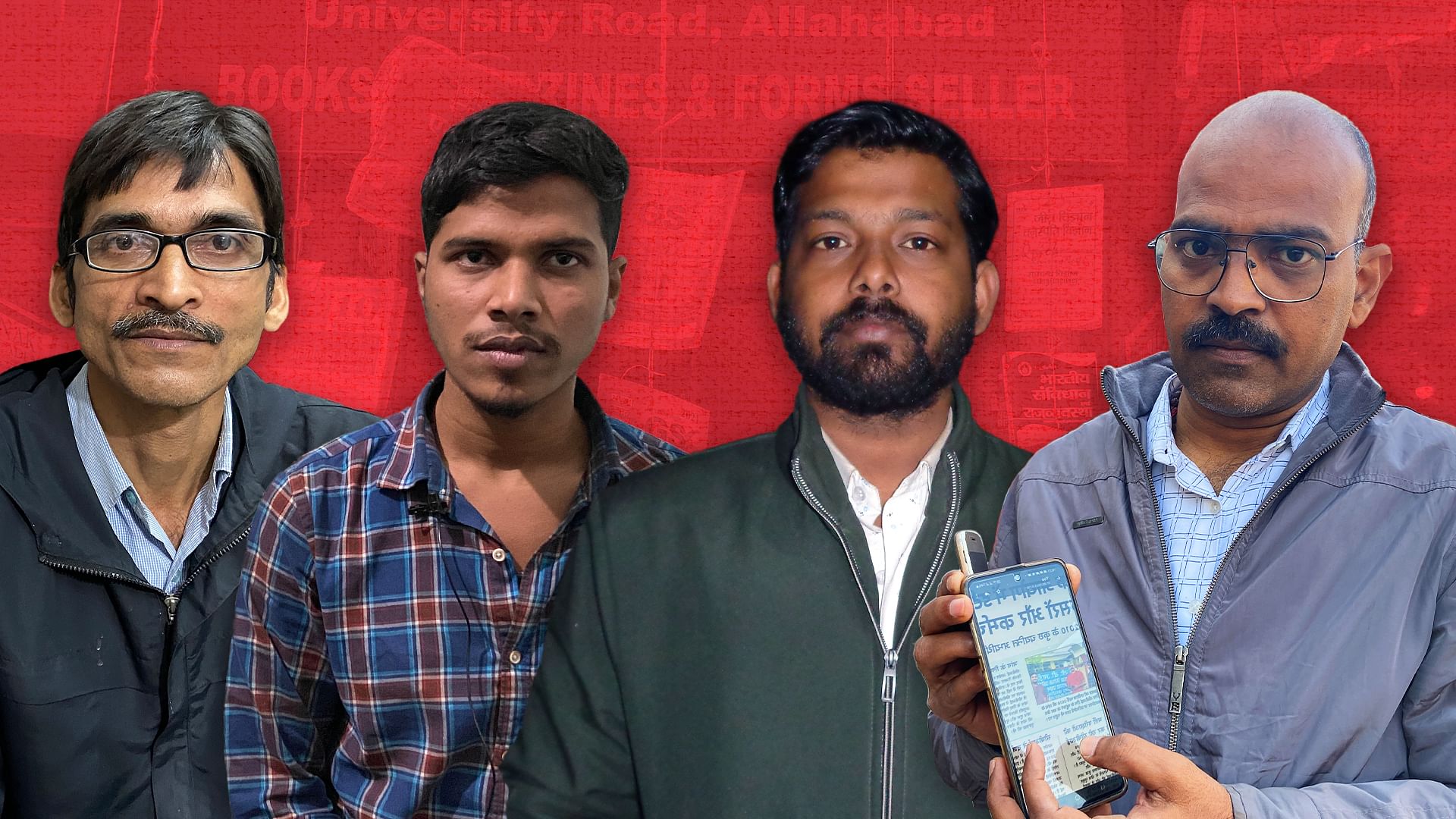