‘Didn’t come to check on us’: CAA protesters weigh up poll choices in Mau

As Mau went to polls in the last phase of the assembly elections, Newslaundry met those who spent months behind bars.

“For 14 months and 10 days they were kept in jail. Photos from protests were used to suggest their involvement in violence when it was the handiwork of outsiders,” said Munawar Razai, 53, who runs a mattress store in Mau Sadar constituency in UP’s Mau district. “The administration always acts on the directions of the Yogi (Adityanath) government and in this case members from the minority community have been targeted.”

His son Faizan, 24, is a first-year law student and was among six persons who were charged under the National Security Act over violence during protests against the controversial citizenship law in December 2019. They were all granted bail by the Allahabad High Court in November last year.

“This government has been targeting Muslims. This doesn’t bode well for their sabka saath, sabka vikas slogan,” said Munawar Ali, a Peace Party candidate who spent 74 days in jail even though he says he wasn’t present on the protest site during the violence.

As Mau Sadar – among four seats in the district – goes to polls in the last phase of the assembly elections, Newslaundry met those who spent months behind bars only to be released later on the directions of the court.

Of a total of 4.77 lakh voters in the constituency, 1.77 lakh are Muslims, 91,000 from SCs, and 45,000 each from the Yadav and Rajbhar communities. But in a constituency with a significant number of Muslim votes, the issue of the citizenship law or the police action has barely been raised by any party except the Samajwadi Party or the Congress.

In December 2020, SP chief Akhilesh Yadav had said that if voted to power, his party will withdraw all the cases filed against anti-CAA protesters. Earlier in January, he had met families of those who lost a family member in alleged police action during anti-CAA protests in UP in December 2019. The party also offered financial help of Rs 5 lakh to families in Lucknow, Kanpur and Firozabad.

The Congress, on the other hand, has tried to strike a chord by fielding Sadaf Jafar, who emerged as the face of police brutality, as a candidate from Lucknow Central constituency. It also gave a ticket to Akbari Begum, the mother of a 20-year-old killed allegedly in police action in Bijnor, but her nomination form was rejected. While announcing the list of candidates, Congress general secretary Priyanka Gandhi had said, “We have fielded such candidates who have struggled to get justice in Uttar Pradesh.”

However, in Mau Sadar, considered the bastion of gangster-turned-politician Mukhtar Ansari, who has held the seat since 1996, his son Abbas is among the most keenly watched candidates this time – contesting the election as a candidate of the Suheldev Bhartiya Samaj Party in alliance with the SP. While SBSP chief Om Prakash Rajbhar has tried to bring Dalits, OBCS and minorities under the umbrella of the alliance, his party hasn’t really spelt out its stand on the issue of anti-CAA protests.

But young voters such as Obada Harisare are not enthused with his candidature. “He never came to check on us during the pandemic or stood by us while the cases were being filed. He has all the time to attend the wedding of (former RJD MP) Shahabuddin’s relative but not visit us.”

For many like Faizan, “since Abbas Ansari never called or visited us, we have made up our mind to vote in favour of (BSP candidate) Bhim Rajbhar.”

Faizan’s father Munawar, who has been a BSP worker since 2017, claimed the “BJP is going to be third in Mau”. “Their zulm (atrocity) won't be tolerated anymore. And since Mukhtar Ansari has been zero on the issue of development, we will give Bhim Rajbhar a chance this time.”

The BSP hasn’t been vocal on the issue of CAA and has been trying to get OBC voters back in its fold, with the BJP and SBSP claiming to make inroads into their traditional support base.

But there is a doubt if things will change for Faizan, who, according to his father, stays withdrawn since his incarceration.

“My life has been spoiled and so is my future,” said Faizan. “Some local channels had labeled us as updravi (miscreant), whether you call them godi media or whatever, they never present our version. They project the version of the administration.”

For Munawar, who is disillusioned with the state of policing, amid a BJP campaign that has “safety” as a major theme, it has been a long journey after all, from being a police mitra since 1995 to an aggrieved father since the police action following the protest on December 16, 2019.

Faizan spent 14 months in jail after being charged under NSA.

Munawar Razai with papers linked to the case against him.

However, activist Obada Haris Yunus Sheikh, who was present at the protest site, denies these allegations. He was among 22 persons who were charged under the Gangster Act but he later got relief from the high court. “It was a peaceful protest led by students who had gathered after the incident at Jamia…I do remember seeing a boy picking up a stone but he didn’t seem to be from among the locals.”

Munawar claimed the police framed him and his son in the case, and that the family also received a notice from the district administration seeking Rs 2 lakh in damages in connection with loss of public property. “I tried my best to control the situation. My name was still added along with 600 others in the FIR.”

On November 26, 2021, the Allahabad High Court, while quashing the detention of Faizan and others, observed that “incorporation of one of the grounds for detention as stated by Inspector Dakshin Tola police station was not correct on facts”.

The Supreme Court last month rapped the UP government over recovery notices and asked the administration to refund the amount collected from several people across the state in connection with the CAA protests.

Aasif Chandan, a 42-year-old AIMIM member who runs a banquet hall, was also charged under the NSA and jailed for 14 months. “I was not even present in Mau that day. I was in Shahganj at my in-laws’ place. As part of a political rivalry, it seems someone suggested my name.”

His party has consistently raised the issue of the police action during the campaign.

“There’s not a single photo of mine at the protest. Is this some kind of joke? I am more patriotic than some of those who have leveled charges under NSA against me…any person will be shattered if they are accused of gaddari (treason).”

Aasif Chandan says he was not even present at the protest site. 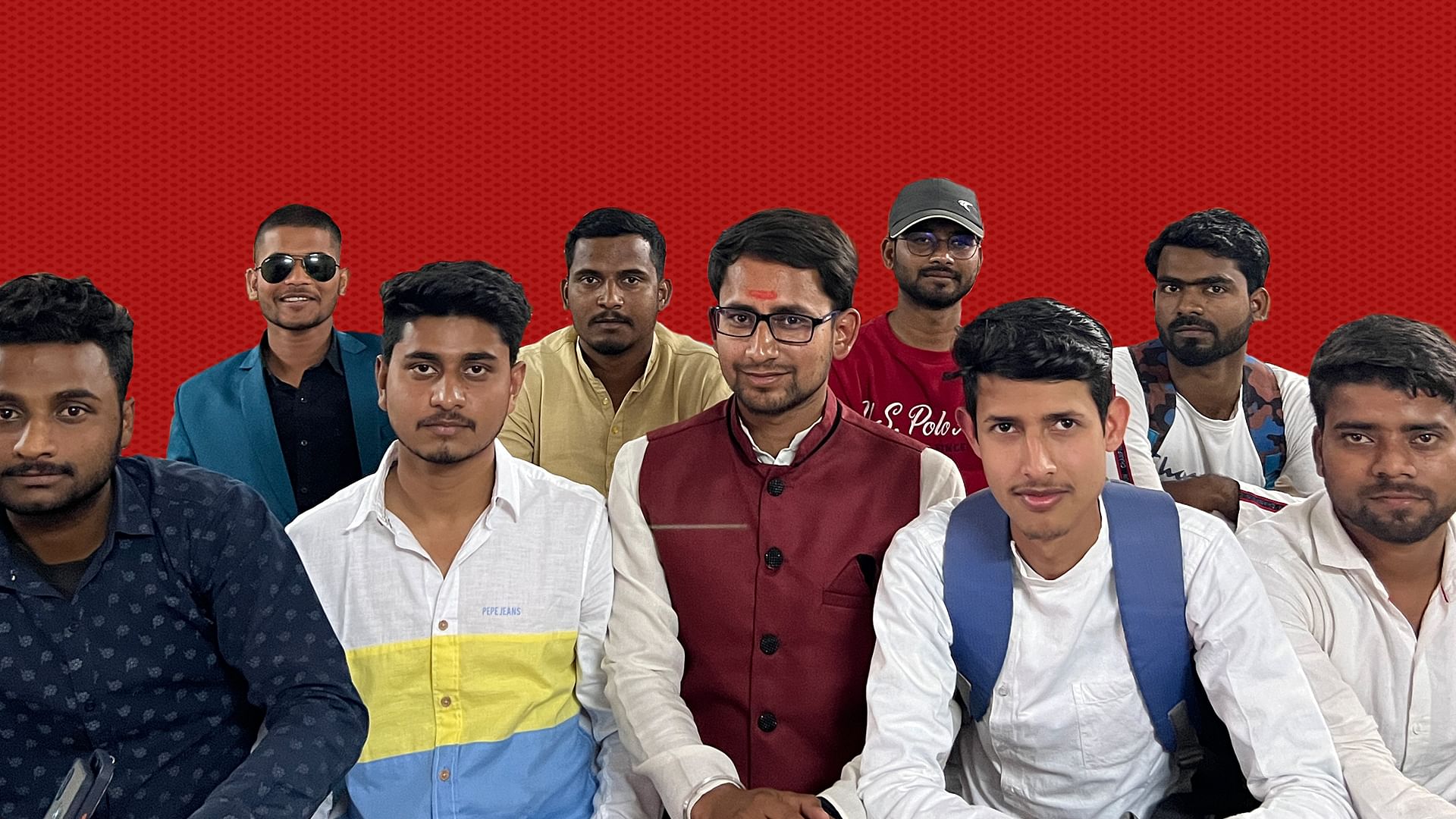