Fact-check: Did a Muslim mob ‘forcibly occupy’ a temple in North East Delhi?

OpIndia’s ‘ground report’ says it did. The temple’s priest, who lives in the same building, says it didn't.

On February 27, Hindu nationalist blog OpIndia published a “ground report” on the riots in North East Delhi, claiming that a temple was “forcibly occupied” and “attacked” by “frenzied Islamist fundamentalists”.

The article was shared by BJP IT cell head Amit Malviya, and retweeted by the Twitter handle of BJP Assam. R Jagannathan, the editorial director of Swarajya, also retweeted the piece.

Newslaundry hit the ground to verify the claims made in the report, and they turned out to be false.

The quality of this “ground report” can be gauged from the fact that it claimed to concern itself with a temple in Chand Bagh — while discussing a temple that is actually in Moonga Nagar.

Claim: The temple is in Chand Bagh.

Fact: It is in Moonga Nagar.

On February 28, OpIndia published a second article on this temple, basing it on tweets by two journalists with the rightwing website Swarajya. This time, it rightly claimed that the temple is in Moonga Nagar, but did not hyperlink it back to its Chand Bagh piece, probably to give the impression that there are two different temples in North East Delhi that were “desecrated”, which might explain the erroneous "many temples" claim in this tweet:

The “ground report” itself is no longer than 500 words. Originally published in Hindi, it’s authored by Ravi Agrahari.

The report made the following claims:

The second article went even further, claiming that the “incessant attack on the temple structure had rendered the entire edifice rickety and tottering, on the verge of collapse”.

A Swarajya report said the “prime target” of the mobs was the Shiv temple.

Neither OpIndia nor Swarajya had statements from the temple priest. In fact, the sources for the claims in the OpIndia article were “devastated Hindus of Chand Bagh”, “local Hindus”, “locals”, and “Hindu residents”, who made incriminating allegations against “Islamist goons”, “Islamists”, “Muslim youth”, “Islamist mobs”, and “frenzied Islamist fundamentalists”.

No names were divulged in this “ground report”.

The temple lies in Street Number 5 of Moonga Nagar. Across the main road, the Main Karawal Nagar road, is Khajuri Khas. Aam Aadmi Party councillor Tahir Hussain’s house is right opposite this street. Hussain, who has since been expelled by the party, is accused of “orchestrating” the communal violence.

The temple in Moonga Nagar.

After a brief episode of stone-pelting on the night of February 23, clashes broke out in this area on the afternoon of February 24. It was a free season of violence as Hindu and Muslim mobs pelted stones, hurled petrol bombs, and burned and looted shops.

The clashes spilled over from the streets to the rooftops. In the temple lane, terraces on the left were occupied by Hindus and those on the right was occupied by the Muslims. They pelted stones at each other from here.

The clashes, which continued till the evening of February 25, were the subject of a detailed Newslaundry ground report on the murder of Ankit Sharma.

A map of the area.

The temple lane in Moonga Nagar fell in the former territory, just near the jamun tree border. Residents here told Newslaundry that the lane is about 40 percent Muslim and 60 percent Hindu.

Gokul Chandra Sharma, a soft-spoken, diminutive man from Mathura, has been looking after the temple for 22 years. The building housing the temple has two floors: the temple on the ground floor, a vacant under-construction space on the first floor, and a terrace above where Sharma lives with his wife, son, and two daughters.

Since the communal violence last week, Sharma has sent his family to stay somewhere else. The temple’s precinct and idols are pristine, and Sharma shows up every morning and evening to perform prayers. Outside, the gates have black residue from mustard oil lamps.

Two Central Reserve Police Force personnel sit on the building's first floor. A few others are posted outside the building next door, which is completely gutted.

To fact-check the claims of OpIndia’s report, we spoke to Sharma and a few locals.

OpIndia Claim 1: A Muslim mob climbed the terrace of the Shiv temple.

Sharma told Newslaundry that no one climbed the terrace of the temple building. Remember, Sharma and his family live on this terrace.

“People definitely climbed the roofs of nearby Hindu homes and were stone-pelting. The stones continued to fall for several hours on the terrace, where I live,” he told Newslaundry. “We had shut ourselves in for several hours. Petrol bombs also fell on the roof, due to which clothes and chairs kept outside were burnt. But no one came to the roof of the temple.”

Were miscreants targeting his terrace because it’s part of the temple building?

Who threw the stones on his terrace? OpIndia claimed it was a Muslim mob. Sharma said he was locked inside his room so he does not know.

A 60 year-old local resident, who wished to stay anonymous, said the Muslims couldn’t even get to the temple because the Hindus were pelting at them from the opposite rooftops.

“The temple was not targeted as such, nor did we let it happen,” he said.

Ram Kumar, whose house is just opposite the temple, told Newslaundry that houses behind the temple belong to Muslims who used ladders to climb onto the terraces of Hindu homes beside the temple.

“They climbed over the terraces of two homes here, but not on the terrace of the temple,” he said. When asked if the temple was targeted, he said no. “The stones were coming from behind; they fell everywhere and not just on the temple.”

On the opposite side, terraces had Hindus who fought stones with stones. (This little detail was skipped in most ground reports, including Swarajya. More on this later.) It’s possible that stones on the temple terrace came from the Hindu side, since they were lobbing stones at Muslims positioned beside the temple.

Gali Number 5 in Moonga Nagar. The temple is on the ground floor of the second building on the right.

Gokul Chandra Sharma refuted this claim. He said: "There was no attack inside the temple. Nobody came here nor did they break anything. All our idols are fine. They have not been harmed.”

Ram Kumar corroborated this. “During the riots, some people from outside threw a few stones in front of the temple, but one Muslim boy pointed out that there is a temple here and asked them to not do anything,” he said. “Then they left the area."

OpIndia’s report included a video that shows the inside of the temple alongside running commentary. Apart from the story’s claims of vandalism and destruction in the temple, the commentator in the video added: “This is the temple at whose roof petrol bombs were hurled, but people did not let them come in. There was stone pelting over the temple."

Since the blog calls this a “ground report”, it is very likely that the reporter shot this video himself. Yet in the video, the reporter himself said people did not allow stone-pelters to enter the temple. So, why is the story saying the exact opposite, with its claims of vandalism and a mob “forcibly occupying” the temple?

The Shiv temple in Moonga Nagar.

OpIndia Claim 4: The Islamist mob hurled stones at Hindus from the roof of the temple.

This claim contains only a quarter of the truth. The mob did not climb onto the temple terrace. Hindus were not just hapless victims of stone-pelting. They were pelting back.

A video from last week proves this. It was shot by someone standing on the side of the Muslim mob, and shows people on rooftops of houses outside the temple lane in Moonga Nagar, pelting stones at the Muslim mob. A Hindu mob on the streets in the distance can also be seen doing the same.

The temple lane in Moonga Nagar. The Hindus occupied the rooftops on the left and Muslim those on the right. They threw stones and petrol bombs at each other.

The Muslim mob on the street can also be seen pelting stones at the Hindu mob.

No attacks on temples in the area

The desecration of religious sites is often meant to humiliate the followers of a religion. It is a fact that no temple was desecrated in North East Delhi during the riots. But multiple mosques were torched, sacked and even bombed. This correspondent visited at least three of these.

A mazaar near Chand Bagh — where both Hindus and Muslims worship — was also gutted by a Hindu mob on February 24.

In Muslim-majority localities like Nehru Vihar, temples weren’t touched. Instead, they were guarded by local Muslims. One temple's patron, Ramdas, told Newslaundry that when he returned home three days after the riots, he found local Muslims guarding the temple till late in the night.

About 300 metres from Tahir Hussain’s house, towards Chand Bagh where the Muslim mob had collected, is the Shri Durga Fakiri Temple. It stands on the main road, and stands safe. If the Muslim mob was really bent on burning a temple, this temple was right at their doorstep.

Our conclusion? OpIndia propagated fake news right as Delhi burned. Meanwhile, people are returning to work, roads are being cleaned, destroyed property is being rebuilt. Despite a Hindu nationalist blog’s attempt to fan flames, life might limp back to normal. 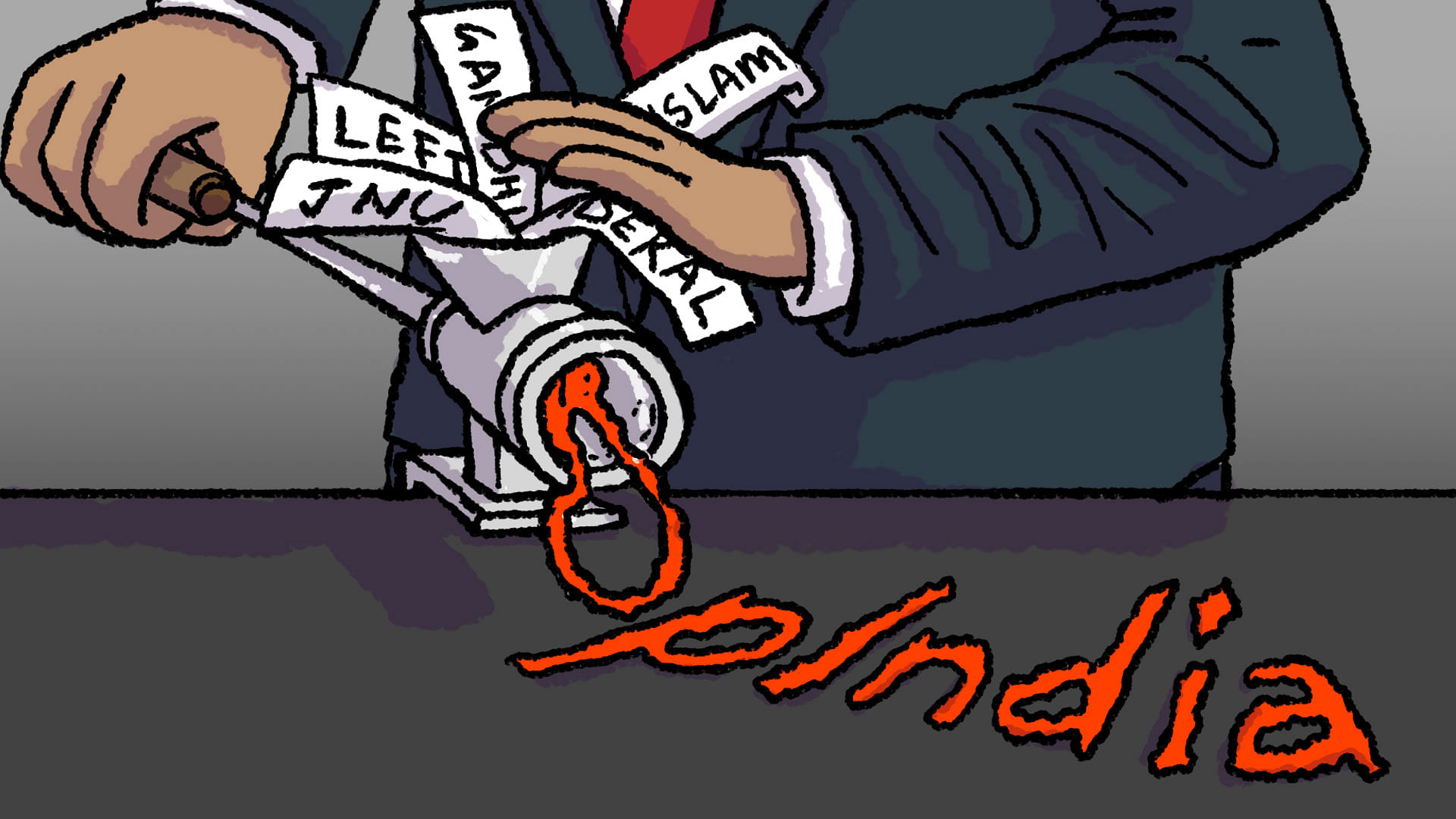