The pandemic couldn’t hit India at a worse time as we’re already struggling to recover from slow economic growth and shrinking investments.

A bunch of engineering graduates from Manipal Institute of Technology, campus-recruited by Amadeus Group, are keeping their fingers crossed. As the IT solutions giant in aviation and tourism stares at an inevitable fall in revenues in the wake of COVID-19, there is palpable disquiet among the fresh recruits. The R&D arm of the Madrid-headquartered company has seen its stock tumble after lockdowns across the globe nuked the sectors the company earlier thrived on.

These very sectors are the primary fallout targets of the virus as it quickly spreads its tentacles in India. The Federation of Associations in Indian Tourism & Hospitality is undeniably apocalyptic but measured in its words. "Tourism industry in India is staring at bankruptcies, closure of businesses and mass unemployment. Seventy percent out of a total estimated workforce of 5.5 crore (direct and indirect) could get unemployed," it said in an open letter to the prime minister a few days ago. They are talking about a whopping 3.8 crore jobs that could be washed away in the corona tsunami.

In India, pay cuts and delayed increments are going to be a new normal, several senior officials from a cross-section of companies told Newslaundry. While the bottom of the pyramid has already been maimed, there is enough empirical evidence to state that the worst is just around the corner.

Thousands of big manufacturing units have downed their shutters helplessly as their distribution and sales network collapsed and fears of community spread of the virus spiked. Maruti Suzuki, India's largest auto maker, has shut down indefinitely its two manufacturing facilities in Gurugram and Manesar (in Haryana) and one R&D centre in Rohtak, in a regulatory filing. Hero MotoCorp, the largest two-wheeler maker in India, has also shut down its factories across the country.

Halol in Gujarat and Chakan near Pune, two industrial townships, have already turned into ghost towns, with units after units whirring to a halt. Along with auto manufacturers, all auto component and ancillary units in and around Chakan and Halol have shut their shops with car sales having dropped to almost nil. While many are mulling over layoffs, some have already started discussions with their staff.

India's already faltering exports have received a final blow as several European countries, the country's largest export market, went in for a complete lockdown. "Our tyre exports to the EU have come to a standstill. We have cut the production substantially," a senior tyre industry official told Newslaundry.

The supply chain disruptions in China and many other neighbouring countries have hit several industries in India like mobile phone, pharma, electronics, automotive, chemicals, textiles and apparel since India relied heavily on other countries for the supply of raw materials and components.

The exponential spread of the virus has put a sudden break on India's booming food business too. "It's an existential crisis for us," said Anurag Katriar, president of the National Restaurants Association of India, and executive director & CEO of deGustibus Hospitality, which owns Indigo Deli, Tote and Dakshin Ras. All restaurants, including his own, are now closed.

Some companies such as IndiGo, GoAir and Apollo Tyres have announced hefty pay cuts for their senior and top managers. Aviation companies are staring at insuperable losses as all their flights are grounded. IndiGo, India's largest airline, has blamed it on the “precipitous drop in revenues” and told employees in an email that it would cut employee salaries, including that of the CEO Ronojoy Dutta, by up to 25 percent starting April 1.

"I cannot think of another crisis that has engulfed the entire world with its speed and penetration into the lives of every single human being on this planet," said Dutta in the email.

GoAir has begun terminating contractual employees, especially expat pilots. "In view of the current situation, GoAir has been forced to terminate contracts of expat pilots, which is in line with the reduced international capacity," a spokesperson said in a statement.

However, some big groups such as Aditya Birla, Bajaj Auto, Essar and Vedanta have promised that they would not cut salaries of their staff nor are they planning to initiate any layoff, according to a Business Standard report.

Leading newspaper groups such as The Times of India and Hindustan Times were forced to temporarily shut down printing of some editions, including Mumbai, their biggest market, as vendors refused to pick up copies for distribution. They have all seen a drastic drop in advertising revenues, and are counting losses on a daily basis. Vineet Jain, managing director of TOI, tweeted that the government may need to extend a tax holiday for one year for several industries. He has also called for a huge stimulus, increase in government spending and waive-off of electricity, water and gas charges.

To reduce the period of Recession Gov may need to give a tax holiday to several industries for 1 year. May need to consider no charge for utilities like electricity, water, gas & even rent (like France has done)& a huge stimulus and an increase in gov spending. #coronavirus

Unfortunately, India, which is already teetering on the brink of an economic slowdown, is in a terrible catch-22 situation. At a time when it has overshot the fiscal deficit targets, any stimulus and further hike in spending run the risk of shouldering severe economic distress. While tax collections are set to drop drastically, owing to factory closures and demand slowdown, the only hope is the higher excise duty collection through increased petrol/diesel taxes. The government has tried to milk the only cash cow available by announcing the second round duty hike in one week, but chances are thatlockdowns may squeeze the oil demand and duty collections to a trickle.

The pandemic couldn't reach Indian shores at a worse time when the country is struggling to recover from several deadly blows it suffered in recent quarters — economic growth slowing to the lowest in a decade, shrinking foreign and domestic investments, and stumbling consumption recovery.

Time is running out for the government as India gets in the firm grip of the deadly pandemic. Stock markets have already plunged nearly 40 percent from their peak with no signs of any immediate revival on the horizon. Several companies with high promoter holding under mortgage are in a mess with margin calls as lenders seek additional mortgage to protect their debt exposure. This, along with the existing strenuous external conditions, may drive many companies to insolvency entailing unprecedented job losses.

Struggling to keep their head above the rising waters, companies are sending out desperate SOSes. “We request you for a 12-month moratorium on our EMIs of principal and interest payments on loans and working capital from financial institutions,” tourism companies, under the aegis of FAITH, asked the prime minister.

To prevent insolvency, FAITH has also sought deferment for 12 months of all statutory dues of GST, advance tax payments, and customs duties at the central government level, and a few other excise duties, state taxes, power and water charges, bank guarantees, and others at the state government level.

Shamika Ravi, director of research at Brookings India and former member of the prime minister’s Economic Advisory Council, believes in Universal Basic Income as a means to fight the economic disruption.

While we firefight to contain #COVID2019 outbreak, it is also critical to look at the economic disruptions. We are in the midst of a slowdown but (1) must put fiscal concerns aside to develop an #UBI type support for those affected (to stem further decline in demand) 1/n

Finance minister Nirmala Sitharaman said the government is in the process of making an assessment of the impact the COVID-19 outbreak may have on the economy. In response to a query from Livemint, Sitharaman said last week: “We are trying to make an assessment by talking to the industry including the services sector and sections of society. I don’t think we have arrived at (a conclusion) as yet."

The government has a Herculean Task on its shoulder to steer the country quickly out of the cataclysm. It may need stockpiles of resolve, but definitely no amount of restraint. 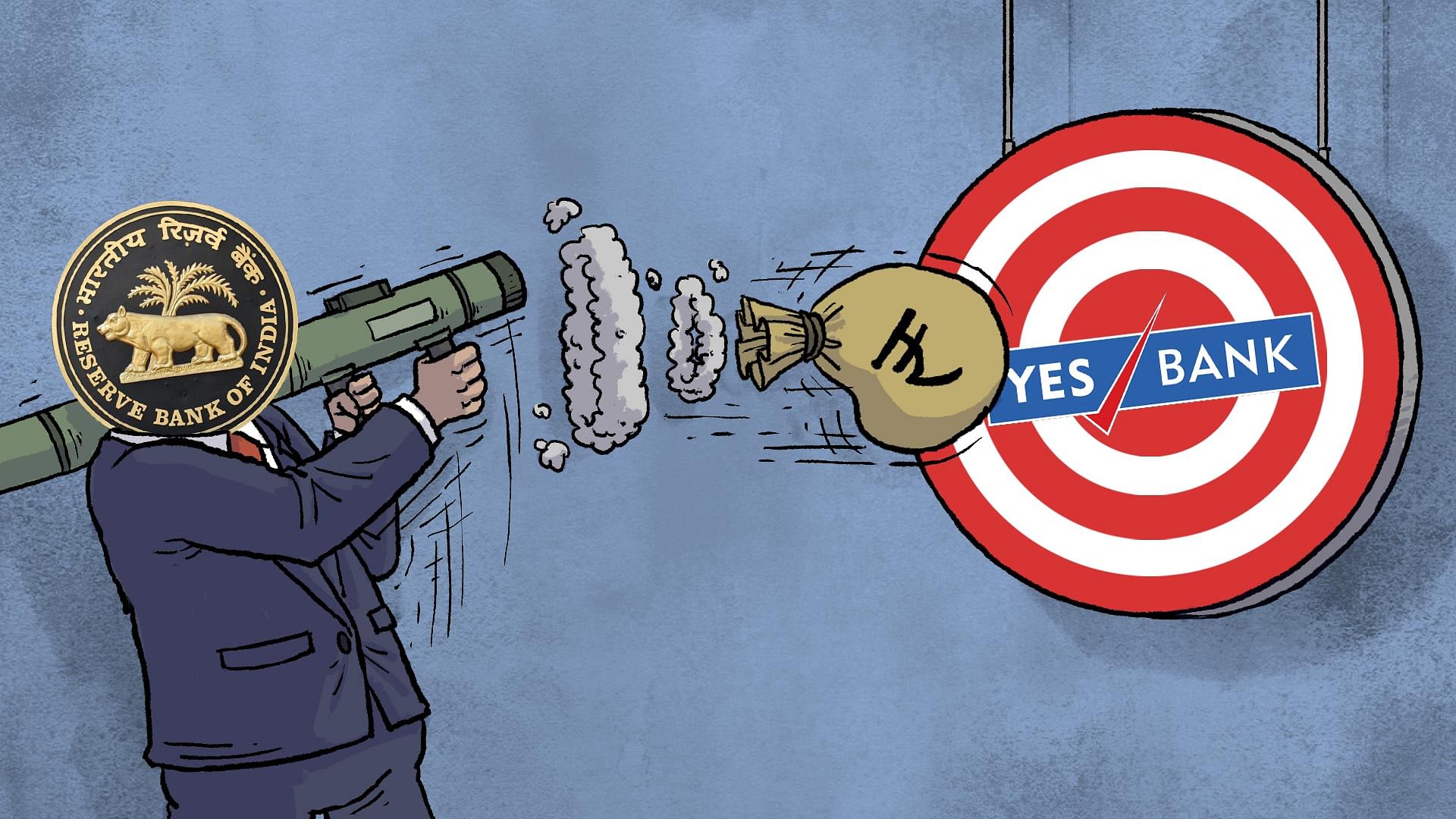 RBI brings out the bazooka to keep Yes Bank going. Will that be enough? Dear reader, you should pay for news. Will you?