Not just lockdown, experts emphasise that community participation is also essential to containing the pandemic.

As state governments across the country tightened lockdowns to contain the spread of coronavirus, accounts emerged of journalists being attacked by policemen in the streets. In Delhi and Hyderabad, journalists returning from work were stopped, questioned, and then roughed up by policemen for “defying” the lockdown orders.

Journalists are considered essential services personnel and are, therefore, exempt from the restrictions.

A journalist named Navin Kumar, who works for Aaj Tak news channel, was stopped and beaten up by policemen near the AIIMS Trauma Centre at around 1.30 pm on Monday. The incident occurred when he was headed to his office in Noida Film City.

“When I showed my identity card and said I am a journalist, a policeman named Gyarsi Lal Yadav took it, pulled out my car keys, and walked away. I followed him immediately. But he handed my key to one of his colleagues on duty,” Kumar wrote in a statement put out on Twitter.

Later, Yadav was joined by other policemen, he alleged, and they took his wallet and mobile phone as well. He claimed he was pushed inside a van while he was asking for his phone and wallet.

“One Inspector Shivkumar then said, ‘He won’t comply so easily. Beat up the rascal and arrest him.’ Three policemen immediately started beating me up inside the van,” Kumar wrote. “Gyarsi Lal Yadav shut my mouth so I couldn’t shout. I was terrified.”

Kumar wrote that he was let go only after several cars had lined up at a nearby barricade, possible witnesses to the violence. All the policemen, according to him, were from the Safdarjung police station.

In Hyderabad, Ravi Reddy of The Hindu was reportedly assaulted by the police while returning from work on Monday night. The reason, as in the first case, was alleged non-compliance with lockdown instructions in the state.

Speaking to Newslaundry, Reddy said the incident occurred at around 10.30 pm near the Begumpet flyover, about 1.5 km from his office. He was driving back from work to his home in Secunderabad.

“When I reached the flyover, I saw the entire way barricaded by nearly two dozen police. There were some other stranded motorists,” Reddy said. He talked to an inspector on duty requesting passage, he added. “But by the time I came back to my car, the police had decided to divert traffic to a lane in the opposite direction.”

This, according to Reddy, prompted him to roll down his window and identify himself as a journalist returning from work. “But they didn’t care and started abusing me in the filthiest of language. When I got out to talk properly, one of them held me by my neck and pushed me inside my car,” he said.

Shocked, Reddy told a senior colleague what had happened. The colleague, in turn, reported it to the state's director general of police. Reddy said the DGP has initiated an inquiry into the matter.

According to Reddy, a bureau chief from the popular Telugu daily Andhra Jyothi also faced police harassment on the same day, in Hyderabad’s Ramanthapur. “He was with two other reporters from the regional media. They had to struggle with the police to go back home from work,” Reddy told Newslaundry.

Meanwhile, the novel coronavirus continues to spread in India. The country reported its tenth death from Mumbai this afternoon. Manipur reported the first positive case in the country’s Northeast.

According to data put out by the Ministry of Health and Family Welfare, the total number of confirmed cases was 492 at 8.45 am today, a jump of 101 cases over the last 24 hours. A day earlier, the jump had been 81 cases within the same span of time, suggesting that the virus is spreading at a faster rate with each passing day, with newer regions reporting patients.

Starting today, almost the entire country has slipped into a near-complete lockdown. As many as 548 districts in 30 states and Union Territories have been put under curfew-like curbs. Most states will observe the shutdown till March 31. Many of these states have sealed their borders as well.

Most state governments imposed the lockdown under the Epidemic Diseases Act, 1897. Section 3 of the Act details penalties according to Section 188 of the Indian Penal Code for disobeying orders detailed in the Act. Punishments for violators include imprisonment up to six months, a fine up to Rs 1,000, or both.

However, “essential services” like medical facilities, grocery shops, fuel stations, and police and fire services will continue to operate in all the states.

Mediapersons, vital for informing the public and fighting misinformation during the crisis, are similarly allowed to continue their duties. However, on Monday, even their press cards could not save the two journalists from being assaulted by the police.

It is not only journalists who have faced difficulties due to the lockdown. Other essential services personnel are in the same boat. Sushil Rao, a journalist in Hyderabad, tweeted a video purportedly showing a doctor being forcibly stopped by policemen in Khammam in Telangana.

A doctorâs nightmare in Khammam. She was going to the hospital. pic.twitter.com/ryjeONthL6

The unprecedented lockdown has derailed everyday life. While measures aimed at ensuring minimum human congregation are necessary to fight the epidemic, the implications of a lockdown can be severe. Its economic repercussions merit attention separately.

Most immediately, there are troubling visuals from various parts of the country of poor migrant workers struggling to go home without public transportation.

Visuals from Delhi’s Anand Vihar Bus Terminus today showed stranded migrant labourers helplessly waiting to go back home. In a video tweeted by NDTV reporter Mukesh Singh Sengar, a young man breaks down while narrating his ordeal. The man tells Sengar that he, along with a few friends, were chased away by the police for defying the curfew in the city. They had been waiting there for three days with no money and food.

As experts have repeatedly urged, social distancing holds the key in fighting this global health threat. But a sudden lockdown in a country of India’s size can negate the purpose of the exercise. Crowds of people flocking to buses and trains to return home can easily lead to a swift infection spread.

No interstate buses,no trains.Migrant labourers asked to leave for home and they march on for Amroha, Aligarh,Badayun,Buland Shahar and many places from Delhi N.C.R pic.twitter.com/5ZajIjwbq5

Migrant workers rushing back home from Mumbai. This is from a railway station in Mumbai from earlier today.
Later in the day, PM Modi asked Indians to try and stay where they are for a few days.

Migrants workers coming back to rural Bihar/UP from Mumbai, Pune, Delhi etc, getting scattered all over the state in overcrowded buses without proper screening or quarantined. Shudder to think of rampant spread of infection to villages , unaware of seriousness of the situation.ð

Journalist Anne Applebaum, writing in the Atlantic, argues that pandemics have always led to an expansion of state power throughout history. To drive home the point, she cites examples of enhanced state power and intervention in public life during crises like the Black Death in Europe in the 14th century, or the plague in England at the beginning of the 17th century.

In these dire times of COVID-19, elected leaders of countries like France, Italy, Spain, Hungary and Israel have assumed emergency-like powers to supposedly fight a war-like situation. A large number of police personnel have descended on the streets of Europe and fined thousands of people for violating lockdown orders. Yet, the public response to such governmental approaches has largely been supportive.

“At times when people fear death, they go along with measures that they believe, rightly or wrongly, will save them — even if that means a loss of freedom,” Applebaum writes, adding that such measures have been popular in the past. “Liberals, libertarians, democrats, and freedom-lovers of all kinds should not fool themselves: They will be popular now too.”

While the Indian government has restrained from assuming such powers, the police’s attacks on journalists indicate such a possibility exists. The countrywide lockdown can facilitate a penalising attitude among overzealous policemen and other state officials empowered to enforce it.

The rationale of a total lockdown to fight an epidemic has its share of critics. Without eliminating the necessity of limited movement of people, experts stress more on community participation as a long-term tool.

Jayaprakash Muliyil, a leading epidemiologist and former principal of Christian Medical College in Vellore, highlighted some of these points in an interview with Scroll. As opposed to drastic suppression or lockdown, Muliyil prefers a mitigation strategy for India involving isolating suspected coronavirus cases, quarantining their households, and socially distancing the most vulnerable section of the population.

“Suppression is not going to work in India, in my opinion. In an organised society, where food can be delivered into each house, it is possible, not in India. In India, suppression would mean hurting each other, exploitation, giving power to wrong kinds of people,” he said. Muliyil stressed that his response to a public health emergency like the COVID-19 outbreak would be a focus on community participation.

Muliyil did advise against large gatherings, overloading of public transport, and unnecessary crowding in general. Social distancing, he suggested, should be maintained for six to nine months to slow down the virus. “But if you apply drastic measures, people will rebel if they don’t have food and milk for their children – and healthcare for other ailments,” Muliyil warned.

The country is in the early stages of the lockdown and people have been mostly compliant. Coronavirus, according to the government, has not entered the risky third stage yet, the stage of community transmission. Once that happens and there is a rapid spike in cases, India could be put on a long lockdown. As experiences from Europe show, several instances of clashes between the police and the public will likely erupt all over India.

And with the economy in doldrums, and millions of people struggling to afford basic necessities, this is the sort of scenario our billion-plus nation should avoid. 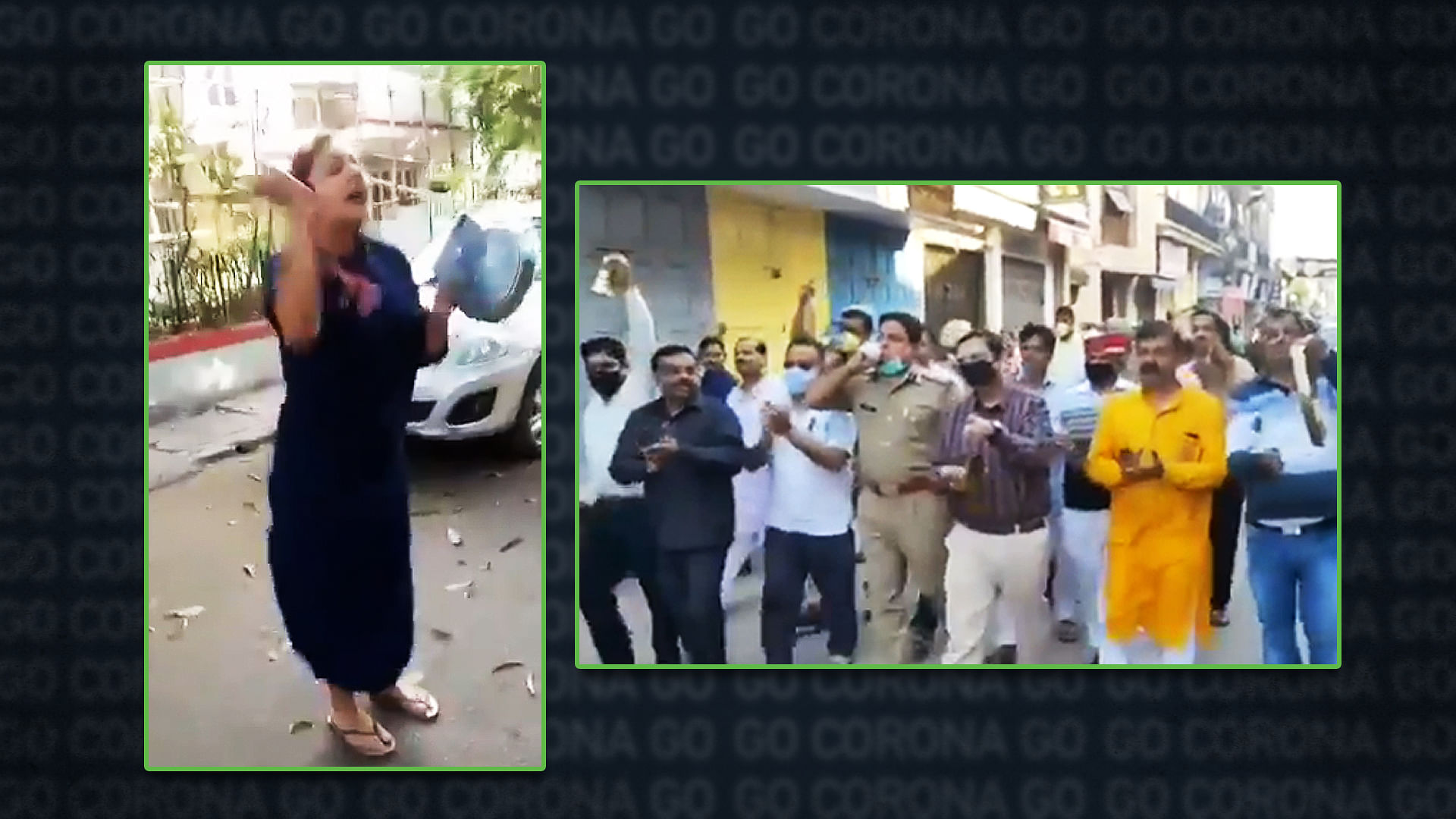