'It's a police state': Andaman journalist taken away from coronavirus red zone, arrested over tweet

Zubair Ahmed was kept in police custody overnight after he questioned the Union Territory's quarantine protocol.

On April 27, Zubair Ahmed, a journalist in the Andaman and Nicobar Islands, posted a tweet asking why the authorities had quarantined families for merely speaking to Covid-19 patients over the telephone.

Can someone explain why families are placed under home quarantine for speaking over phone with Covid patients? @MediaRN_ANI @Andaman_Admin

Zubair was referring to a story from April 26 about the quarantining of four members of a family after one of them telephoned a relative who had tested positive for coronavirus.

Hours later, Zubair was summoned by the police, arrested, kept in police custody overnight, and produced in front of a court, which released on bail — all because of that one tweet.

Zubair, a freelance journalist, said he first received a phone call on the morning of April 27 from the Aberdeen police station, asking why he had asked such a question in the “public domain”. Zubair replied that he would have spoken to authorities if they had been available for comment.

“You can’t get in touch with any of the offices over the phone because they’re all busy,” Zubair pointed out to Newslaundry. “Twitter is a medium where I could ask, so I asked the question there. Posting on Twitter isn’t creating any panic.”

The police official directed him “not to write any post” on Twitter, Zubair said, and also did not answer Zubair’s question on why the family members had been quarantined. Instead, he asked Zubair to come to the Aberdeen police station.

Zubair lives in a village that is under the jurisdiction of the Bamblooflat police station. Bambooflat is a town about 40 km from Port Blair. His home falls in a “red zone” — a hotspot area for the coronavirus outbreak — so the neighbourhood has been sealed. “I said I can’t come to the police station because I’m in a red zone,” he told Newslaundry.

The phone call ended, but that wasn’t the end of the matter.

At about 7.30 pm, a team of police officers from a police station in nearby Bambooflat visited his house. Zubair, who had just broken his fast and was preparing to pray, was told that the district superintendent wanted to meet him.

The trip from Bambooflat to Aberdeen in Port Blair can be undertaken by ferry or by a long road. Due to the lockdown, there were stringent restrictions on the movement of ferries. So, the police arranged a ferry on an emergency basis to transport Zubair.

In Port Blair, Zubair was handed over to the Aberdeen police station. While on the way, he had contacted a few friends and told them what was happening. One of them was Denis Giles, editor-in-chief of the Andaman Chronicle.

“By the time I reached Port Blair, they took my phone,” Zubair said, speaking to Newslaundry on a phone he had borrowed from a family member after the ordeal. “They switched it off and said it had been sealed.”

Later, Zubair was also charged under Section 54 (punishment for false warning) of the Disaster Management Act.

Among these offences, 505(1)(b) of the IPC is non-bailable, punishable by imprisonment of up to three years.

Zubair stayed in police custody till the morning of April 28 when he was produced in court.

Zubair Ahmed is being produced before the Hon'ble Court in some time. Advocate Tabraiz is defending the case on behalf of Zubair #AndamanJournalistArrest #coronavirus #lockdown #quarantine

At noon, he was produced in front of the district and sessions court and granted conditional bail.

Arrest was a ‘big blunder’

Once he was granted bail, Zubair asked the police authorities how he would get back home.

Here’s where it got confusing.

Since Zubair was coming to the capital from a red zone, police authorities told him he would be quarantined in Port Blair for 28 days.

“I told them their mistake was to pick me up from a red zone in the first place,” Zubair said. This, along with the fact that he was charged under a non-bailable section simply for a tweet, and then told he would be quarantined for 28 days, led him to tell the police officials that he would be forced to “raise” the issue.

“They realised what I was trying to say,” Zubair told Newslaundry, “and then arranged a vehicle and dropped me at my house.”

Zubair thinks he was arrested to “teach him a lesson”. He also said it was a “big blunder” on the police’s part.

“If they wanted to arrest me, they could have done so at the nearby police station,” he said. “I’ve been asking questions, and it’s a big problem for them...These officials are new to Twitter and their tolerance for questions is low.” Zubair claimed he’s even been blocked by the administration’s chief secretary on Twitter.

Zubair said the Islands have become a “police state”.

“If the media is asking questions, why can’t they properly respond? Instead of clarifying, this is the new method they have taken,” he said. “They target you. Everyone wants to fight the coronavirus. But if you ask questions, you become an enemy of the state and, somehow, against the corona warriors. It all comes in a package. That’s the problem.”

Zubair believes his arrest was the first, and more are likely to come. He thinks the next target will be Denis Giles, the editor of the Andaman Chronicle.

The administration does not want to be criticised

The Andaman Chronicle clearly agrees with Zubair’s presumption; the publication said as much on Twitter.

Newslaundry reached out to Denis Giles to ask him about his newspaper’s April 26 report on a family that was quarantined after a phone call with a Covid-19 positive relative, and about Zubair’s arrest.

“I had got a phone call from one of the family members quarantined,” Denis explained. “The person said their 79-year-old father-in-law had telephoned a relative who tested positive for coronavirus, simply to ask about his wellbeing.”

According to this report, the father-in-law then received a phone call from the authorities, asking if he had spoken to anyone on the telephone. He said yes, and the authorities asked him for his address.

“Within hours, the authorities landed up at their house and put four members under home quarantine for 28 days,” Denis said.

He said Zubair’s arrest was “unfortunate”: that a journalist was not allowed to raise simple questions or report on anything that the administration thinks is “against them”.

Denis said that he believed he was the next to be questioned because of his home quarantine report, and because he was informed by a police official while present in the court that the order for his arrest had been issued.

However, after the media highlighted the issue, the officials were "rethinking the arrest", Denis claimed.

“At present, in Andaman, it is only the chief secretary, Chetan Sanghi, who is the one source of information about the Covid-19 cases on the island,” Denis said. “No other person is authorised to even speak about it. So whatever information that comes through the administration is very tailored — only appreciating them and their work.”

Denis said the island’s sole Member of Parliament, the Congress’s Kuldeep Rai Sharma, is not involved in this process, let alone other elected representatives or members of panchayats or the municipal council.

According to Denis, Sangi and the administration do not want “any kind of criticism” made against them.

Zubair’s wife, Sajida, told Newslaundry the arrest might have been planned.

“The police constable who had called him when he was at home told him to eat well and pray before coming to the station,” she said. “I think they knew that he’s not coming back.” Half an hour after Zubair left, she said, he telephoned her saying he was on a boat to Port Blair.

Zubair’s phone hasn’t been returned, Sajida added, and he was planning to file a petition on May 3 for its return.

Pathak directed this reporter towards an official statement that said legal action had been taken against the “self-proclaimed journalist for posting the inciting, false and instigating tweet to disrupt public harmony, violating government order and to create panic among public (vide Fir No - 233/20 PS Aberdeen, dated -27/4/20 under section 188,269,270, 505(1) IPC and 51, 54 DM Act).”

The official statement also said that “such messages” instigated distrust among the public for the “well-established and universal health and contact-tracing protocols, thus motivating people to conceal correct information, falsify their statements, do not cooperate and/or protest against medical protocols and even break the lockdown and gather in large numbers publicly.”

Apart from Zubair’s tweet, Pathak also mentioned “information about [Zubair’s] informal efforts to dissuade corona positives/quarantined contacts not to reveal details” to the administration” which, he said, “jeopardised the effort of isolating suspects and containing the pandemic spread”. 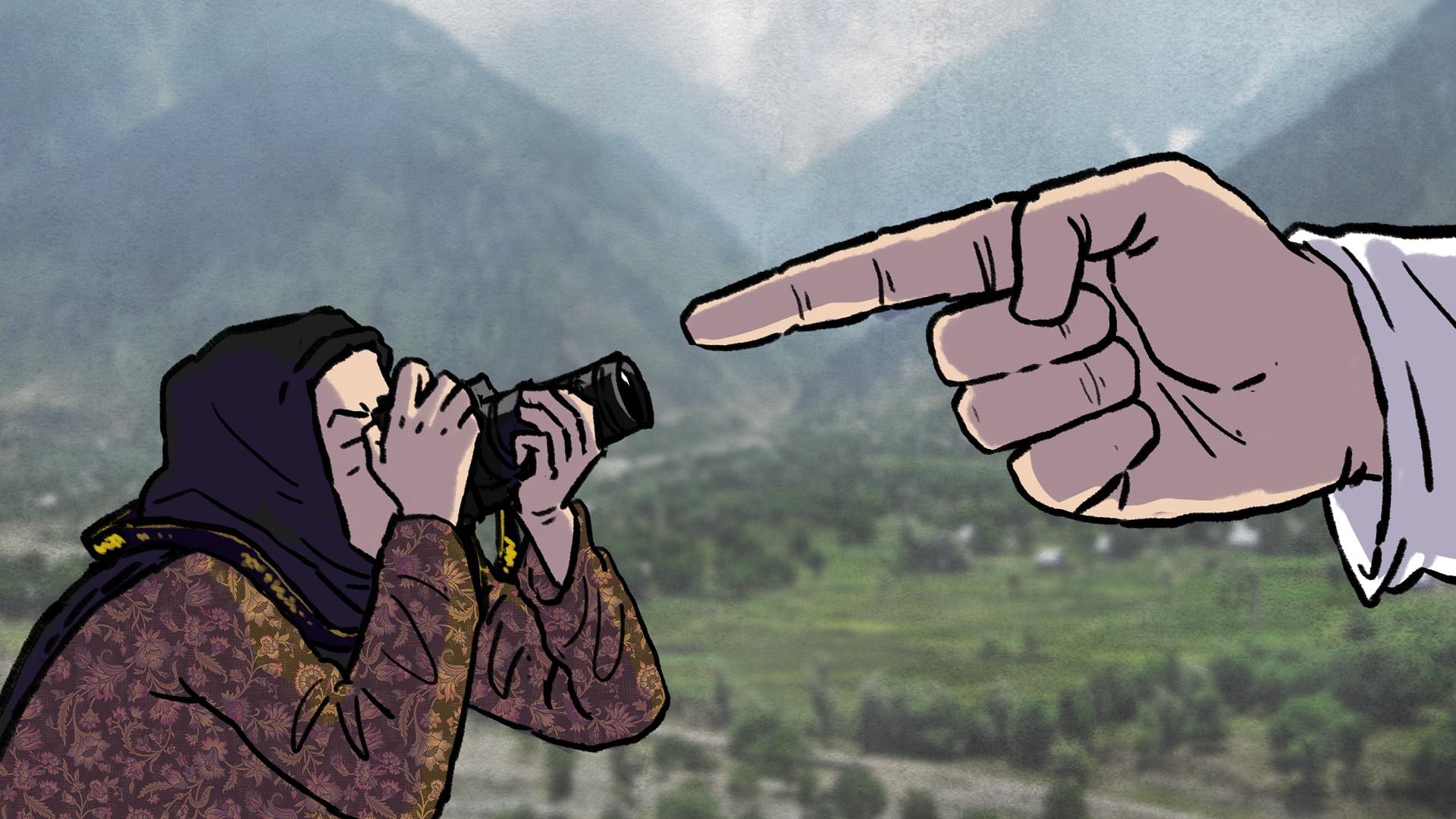 What’s the basis for FIRs filed against The Wire for ‘disobedience and promoting enmity’?