Newspapers want to stop free circulation of epapers. Is it a good idea in a pandemic?

The Indian Newspaper Society is threatening to take legal action against any person who circulates an epaper for free.

Even as the home delivery of newspapers continues to be in disarray across India in the wake of the coronavirus pandemic, free digital distribution of epapers has met with stiff resistance from media companies. The owners, who supported the idea initially when they were forced to stop printing newspapers following the refusal of distributors and vendors to deliver them to the readers, have now raised strong objections.

They are now bemoaning the loss of revenue and threatening legal action and heavy penalties over such “theft of epapers”.

In an advisory sent out to its members on April 30, the Indian Newspaper Society, a pressure group which works to protect the interest of the newspaper industry, has called it “piracy and theft of epaper”. "A lot of newspapers are available in the epaper format online in the morning every day, some of them being paid and some being free. Many users are actually copying the newspaper and creating PDFs which they circulate in Whatsapp and Telegram groups to the readers, leading to a loss in both subscription revenue for the print newspapers as well as epapers digitally," the secretary general of INS said in the advisory, adding that it was illegal and publications were trying to tackle it in their own ways.

The INS has not minced its words. It has exhorted its member organisations to take legal action against offenders, especially against Whatsapp and Telegram administrators.

The secretary general has recommended several ways to help members curb this practice. The best way, according to the INS, is to communicate clearly in apps, websites and newspapers that circulating a copy or part of an epaper is illegal and that strict legal action will be taken against individuals doing so with heavy penalties.

The INS has also urged members to publish "a few news stories to talk about the huge fines and lawsuits initiated against them to deter others from doing it”.

On the flip side, it has advised members to build certain product features that prevent piracy or at least slow it down. These include limiting the downloading of epapers as PDFs and images; adding javascript code on pages to prevent copying; inserting an invisible user identifier code so that circulated PDFs on social media can be traced back to individuals, and autogenerating the list of users downloading more than a specified number of PDFs per week and block them.

The move created a flutter in social media circles after Dainik Bhaskar frontpaged a news item warning administrators of Whatsapp and Telegram groups about circulating PDFs of epapers. The issues such as vendors not picking up newspapers and housing societies not allowing delivery, meanwhile, continue unabated, creating a massive hindrance for readers. Many newspapers like the Times of India and the Hindustan Times had stopped printing some editions of their newspapers in the initial days of the lockdown, especially in cities.

Several former editors and journalists who were helping readers around them by sending them PDFs of some epapers have stopped doing so, fearing backlash from the organisations.

A former editor turned media commentator and entrepreneur, Pradyuman Maheshwari, is dejected. "I distributed epaper PDFs only because not everyone was comfortable accessing epapers. If the newspapers or the INS had raised a warning at the beginning of the lockdown, I am sure the few hundred ‘volunteers’ wouldn’t have taken the trouble of waking up early and sending it out to all," said Maheshwari, adding that he wasn’t profiting from the distribution. "Since the newspaper body has termed it 'theft of newspapers', possession of a stolen product can also be termed a crime.”

The proposal of the INS to “insert a user identifier code” so that every circulated PDF can be traced back to the first distributor has not gone down well with many regular readers.

Shailesh Gupta, president of the INS and director of Jagran Prakashan, which owns Dainik Jagran and Mid-Day newspapers, refused to comment, despite several phone calls and text messages from Newslaundry. "Am busy now. Can't talk," is all he would say. The piece will be updated if a comment is received.

Bahubali S Shah, former INS president and now an executive committee member, who owns Gujarat Samachar, said people should be allowed to circulate PDFs of epapars during the lockdown, but added that he was yet to see the INS circular.

Explaining the rationale behind the INS move, MV Shreyams Kumar, another INS executive committee member and joint managing director of Mathrubhumi, said it has become difficult to sustain the newspaper business. "The cover price hardly takes care of the cost. Each newspaper costs around Rs 16-20 per copy depending on the number of pages and other news gathering and production expenses. It is heavily subsidised by ads without which everyone is bleeding. I am also bleeding,” he explained.” Today, we got a few ads but there have been practically no ads in the last one month. It is a big challenge to keep it floating. Every newspaper has cut the number of pages because of a substantial drop in advertising.”

The move by the INS comes at a time when media companies are laying off employees or cutting their salaries, ostensibly to tide over the fall in revenues, as Newslaundry has documented over the past few weeks.

"Every newspaper employs so much manpower and incurs high production costs. How long can we go free? How do we recover the cost?" asked Kumar. "I think people should spend a small amount and get epaper online given that news gathering and production costs a lot.”

He revealed that Thozhil Vartha, a high-selling Malayalam magazine run by his group, faced a similar “piracy attack” recently. "Our legal team got involved in it, quickly filed a police complaint and virtually stopped it," said Kumar.

Tinu Cherian Abraham, a Bengaluru-based media commentator, is also upset at the INS's move. "A lot of advertisements come to the print media because of the high readership and not merely because of the circulation numbers. If readership drops, so will advertisements and revenue. It is important to keep people reading newspapers until the lockdown gets over and distribution of physical copies improves," said Tinu.

"It is illegal to broadcast PDF copy of newspaper in whatsapp groups, action can be taken on group admin".
This news reportedly appeared in Dainik Bhaskar has created quite a discussion and uproar in various whatsapp groups today. 1/n https://t.co/1s3IZ1apS5 pic.twitter.com/s0je0BVwLB

Interestingly, the Indian Express Group and the Free Press Journal are openly defying the INS directive.

"The Free Press Journal reiterates its desire to keep all its readers informed and assures you that sharing the PDF or any form of the paper in any form is not an illegal act," the paper said in a statement, adding that its epaper was available on Paytm as well. The paper has editions in Mumbai, Bhopal, Indore and Ujjain. "We are dedicated to bringing our readers the latest news through our website and our epaper.”

"The Indian Express and FPJ groups have taken a bold step. It’s an effort to ensure correct information reaches people at zero cost, and in a format that’s easy to access," said a former editor who has been distributing epaper PDFs since the lockdown began.

Referring to the move by the Indian Express group and the FPJ, Kumar said, "Each organization has its own objectives and goals. Some believe that content is being created anyway and they are not able to reach the reader. So you might as well share PDFs free so that you can keep them in the loop."

A majority of the INS members, however, are against free distribution of epaper PDFs, Kumar noted. "There is also an issue of content aggregators such as DailyHunt. They have an agreement with newspapers for a small amount and they increase the user base and go and sell it to the advertising agencies saying we have more readers in our app than the original ones.”

Kumar's own market, Kerala, though is quite different from the rest of India in terms of home delivery of newspapers. "Here, newspaper delivery is by and large unaffected,” he said. “You can say around 95 percent. Epapers of leading newspapers in the state such as Malayala Manorama and Mathrubhumi are paid for. There was an initial discussion to allow free distribution of PDFs but when the distribution got normalised, we decided not to do that."

What if readers have paid an annual subscription? "In case of annual subscriptions, newspapers should ideally extend the period and allow subscribers to get their free copies for the days they didn't get the delivery," said Kumar.

The Mathrubhumi group runs an annual subscription scheme for their magazines and many people from outside the state subscribe to them. They all get a postal delivery, which is hampered due to the pandemic since March. "So we are calling them up and ensuring that they get our PDFs by mail until the lockdown is lifted. Of course, there are chances of some of them forwarding the PDFs to others. But I can't deny our subscribers' right to read the magazine,” Kumar said.

At a time when India’s media industry is tottering under the heavy burden of increased costs and falling revenue, nobody would want to cause further loss to the newspapers. But is it ethical to threaten readers with legal action and heavy penalties merely for seeking alternatives to their usual morning reading? Definitely not. 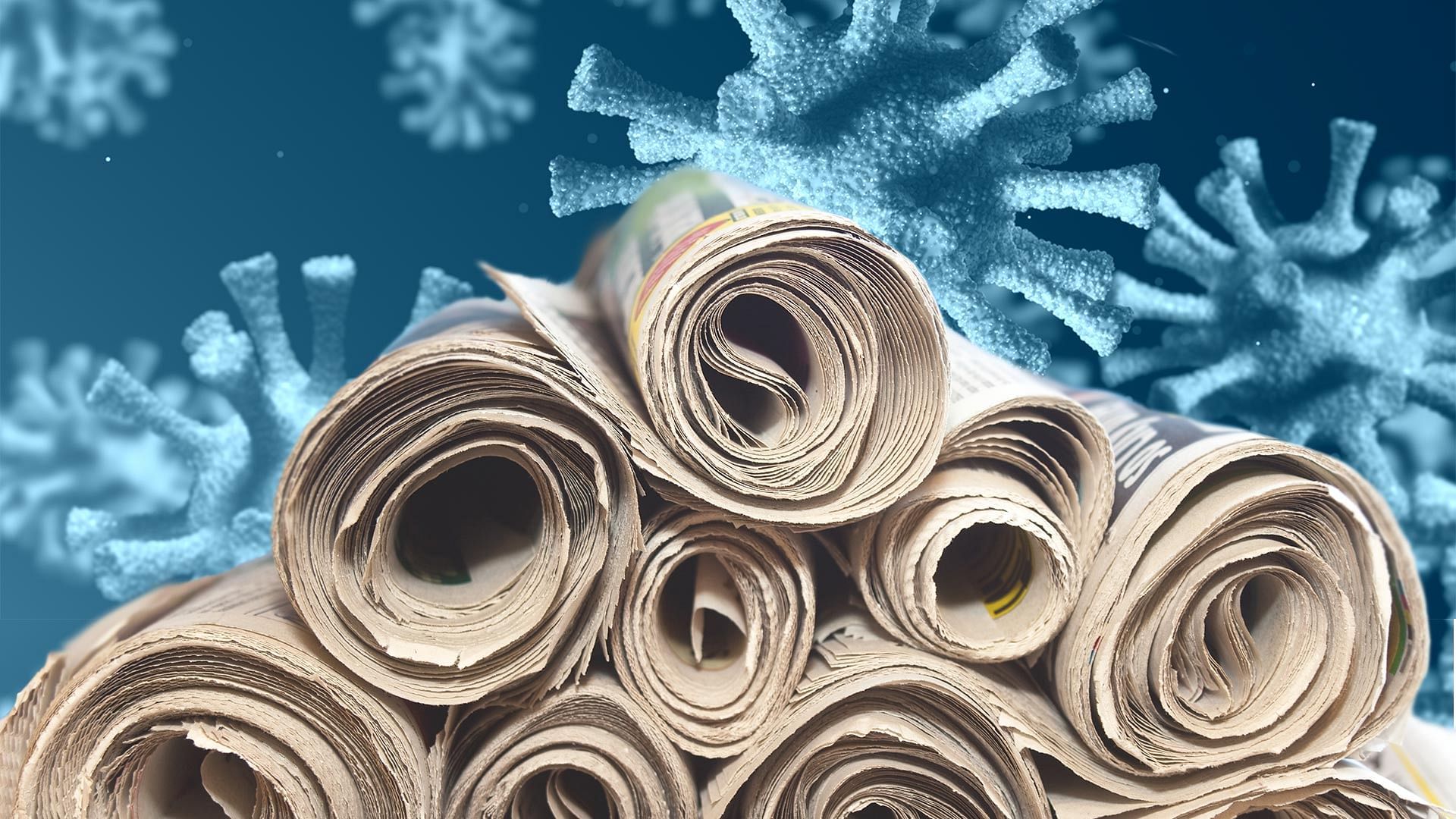