From asking a Muslim panellist whether he wanted to marry four times to declaring that Muslims were not ‘civilisationally evolved’, Times Now’s dog-whistling had it all.

Dog whistle: A subtly aimed political message that is intended for, and can only be understood by, a particular demographic group.

Why did I find it important to define “dog-whistling” at the beginning of this piece? It’s because Rahul Shivshankar, or RSS, and friends on Times Now seem to have perfected this art to a T. One such glorious display of his skills occured on his primetime show on June 1, titled, “INDIA UPFRONT - #LobbyIncitesMuslims”.

For some context: As we speak, cities across the United States are exploding with protests against the killing of George Floyd, a black man in Minnesota. Floyd died after a white police officer knelt on his neck for over eight minutes. Floyd gasped, cried “I can’t breathe”, and choked to death.

It’s worth looking into how RSS and his panellists twisted these events to allege that Indian Muslims are essentially the most empowered bunch of people in the world — and everyone saying otherwise is harming the integrity of the country. Because Times Now’s intentions, and Shivshankar’s too, are obvious.

It pretty much captures the plotline of the show and the direction that the anchor intends to take in “debating” the issue. Times Now is obsessed with using the word “EXPOSED”, perhaps to suggest that it’s uncovering some big conspiracy to destroy India. Or its editors suffer from severe delusions.

And all they needed to do to prop up this exposé was pick up tweets from a few popular personalities on Twitter and draw conclusions.

In the opening monologue on his show, RSS said, “This is a Times Now Super Exclusive. A big story. There’s no limit to opportunism. A group of Khan Market intellectuals and Congress-sympathising Modi bashers have begun an insidious campaign to use the imagery and narrative building in the United States on the back of the African-American anti-race protests to incite Indian Muslims here, at home...This group is inciting activists to mobilize Muslims under the banner ‘Muslim Lives Matter’ just like the ‘Black Lives Matter’ campaign in the United States.”

The evidence to support his claims?

A 46yr-old Black man's murder by police has brought nationwide protest in the USA, & even in Canada under the banner of #BLACK_LIVES_MATTER! India badly needs a similar type of mobilization to oppose extra-judicial killings of Muslims in the country. Why not #Muslim_LIVES_MATTER

. @priyankachopra good to see your solidarity for #GeorgeFloydWasMurdered and #BlackLivesMatter. But why are you silent on institutional Islamophobic violence in our own India's police against Muslims and persons presumed to be Muslim? Please say #MuslimLivesMatter in India ðð¾? pic.twitter.com/D4xeSHiNcz

So our starlets who did not even whisper about the anti muslim carnage in delhi, the spate of lynchings, the citizenship bill, the arrests of academics and intellectuals are outraging with the hashtag #BLACK_LIVES_MATTER. PUKE.

So much respect for all the celebrities tweeting #BLACK_LIVES_MATTER. It takes courage to bring your cowardice to the fore when you tweet for American lives but canât tweet for Indian lives.

Outraged about what happened with George Floyd? I am too. But, do you even remember Faizan? pic.twitter.com/BKhzJVMROj

Only two out of these five tweets used the hashtag #MuslimLivesMatter but no matter. According to RSS, this is still a conspiracy to use the banner “Muslim Lives Matter” to “mobilise” people.

Interestingly, Times Now conveniently cropped the tweets, retaining only the text and not the images.

They even threw in a random tweet by a person who has only 42 followers because hey, how else can conspiracy and mobilisation be proved in order to attract eyeballs and sell ads?

This is all the evidence RSS needs to EXPOSE a giant conspiracy by Modi bashers to undermine the integrity of India.

If you have ever watched an episode of India Upfront (which I highly recommend you don’t, because we’re torturing ourselves watching it for you and analysing it), you’ll notice panellists who exist simply to amplify RSS’s bizarre theories with lazy opinions. It’s a brave attempt to separate the “anchor” from the “opinion” because the anchor is supposed to be “neutral”.

Madhav said: “You’ve obviously put out a whole list of instances like ‘Not In My Name’, ‘Award Wapsi’, etc. Clearly these have orchestrated campaigns and once again there seems to be an attempt on what it seems is a false pretext.”

Now brace yourself, because Madhav is about to explain what is happening in the US: “The pretext is that in America, all that is taking place is in response to the history of oppression, the history of racism that existed, when blacks could not even vote...and that is very different from the constitutional protection that any religious group enjoys in India.”

So, according to Madhav, the protests in America are due to historic oppression. But that just shouldn’t happen in India because hey, minorities here have never been discriminated against by the majority. Absolutely no comparison. This clearly upper caste Hindu man hasn’t experienced any discrimination based on caste, religion or gender, so obviously it’s not happening or has never happened anywhere in this entire country.

In Madhav’s head, that instance of policemen beating up Muslim protesters and forcing them to sing the national anthem, or a minister garlanding eight people accused of lynching a Muslim — all of that just didn’t happen.

Enter supporting actor number two, Vivek, who is introduced as just that — Vivek.

According to Vivek, “This threat against Muslims is imaginary. If you go through the thread of thoughts of these individuals, you can see unanimity here...Why are these people so virulently anti-India, not anti-Hindu or anti-Muslim, but anti-India is something we need to check out.”

That’s it. That’s the setup for the entire show where two men just appear on your screen, add fuel to the already burning dog-whistling fire, and go away. RSS can conveniently use this device to distance himself from the lazy opinions of these two men saying, “Hey, these were opinions by our ‘analysts’ and ‘political observers’, I didn’t say it, OK?”

The show’s panel comprised six men – Arif Iqbal and Atiq Ur Rehman, whom RSS used as convenient punching bags; Vivek Srivastava, a self-proclaimed communist leader whose credentials meant he was roundly taunted; Amit Malviya, the head of the Bharatiya Janata Party’s IT wing; Shehzad Poonawala, a regular pro-establishment panellist; and MR Venkatesh, an advocate and commentator.

RSS didn’t waste any time. He asked Atiq and Vivek a series of questions such as:

All right. Let’s take a step back for a second.

The entire context of the debate is George Floyd and the Black Lives Matters protests in the US. The protests spotlighted the continued racial bias in the country, police brutality, and how the state uses excessive force against its minorities.

A recent example is Faizan, 23. He was part of a group of Muslim men that was assaulted by police officials and forced to sing the national anthem during the communal carnage in the capital early this year. He died subsequently. During the citizenship law protests in Uttar Pradesh, police action killed at least 24 Muslims across 15 districts. In the same state, the government “named and shamed” citizenship law protesters, putting up posters with their names, photos and addresses.

There have been cases of the police wrongfully accusing Muslims of violence, before backtracking. In Bengaluru, the homes of around 700 poor families were razed on the pretext that they were “illegal Bangladeshis”.

This is just the tip of the iceberg, but it is casually ignored by RSS. Instead, he turned it into a policy debate, asking if the Modi government has formulated policies to discriminate against Muslims.

Actually, the answer to that question is yes, but that’s not the answer RSS wants to hear. Instead, panellists who opposed his “logic” were systematically shut down. At one point, RSS said: “Now viewers, in a society where minorities are supposed to be treated like the blacks were in America in the 1950s, ‘60s and ‘70s...Atiq Ur Rehman, if that were the case, you would not be on national television, you wouldn’t be sitting in the same bus, you wouldn’t be allowed into restaurants.”

See what he did there? He just casually pointed at a Muslim panellist and showed him his place. Told him how great India has been to allow all of this for “people like him”.

But that wasn’t all.

“No, I don’t,” Srivastava interjected but RSS ignored him and kept going, “You see, minorities like Atiq Ur Rehman in China will never be sitting on TV in China, accusing the Communist Party of bias. You know where they would be? They would be in concentration camps. Do you see that? Can you condemn it?”

RSS eventually moved on to Arif Iqbal, a lawyer. Iqbal explained how the fundamental rights in our constitution actually allow the state to discriminate on the basis of religion, caste and sex in order to provide welfare and special rights to disadvantaged groups. That’s when RSS, who doesn’t have time for logic, cut him off.

Unsurprisingly, he explained that Sikhs and Hindus were denied fundamental rights under another regime – and you know exactly where this whataboutery is heading.

Finally, it was MR Venkatesh’s turn to speak. He quoted Samuel Huntington’s Clash of the Civilisations, saying: “One of the biggest faultlines in the 21st century will live with the Muslim countries and communities.” I couldn’t find that quote, but let’s move on because what Venkatesh said next is...interesting.

“Who is killing Shias in Saudi Arabia? Is it the RSS? Who is killing the Sunnis? Is it the BJP? Look, the Islamic community is at war with itself. It is still evolving to be in a civilised state. It is only the benign touch of the Hindus in India which has made them civilisationally a wonderful community,” he said. He added that Islam was “incompatible with the modern world”.

RSS casually said, “OK,” and moved on to the next panellist.

Anchors like him, and channels like Times Now, don’t think it’s necessary to counter someone who is calling an entire community backward and not-very-evolved. Instead, you’ll see them speaking over the actual representatives of the community being pilloried.

That, ladies and gentlemen, is how you do some dog-whistling and Muslim bashing. RSS has perfected that art.

Sidenote: The logo of KENT Mineral RO flashed at the top of the screen throughout this debate.

This is the same KENT RO that tweeted out the following words a few days ago.

One has to wonder after watching this show whether Kent RO’s virtue signalling public words actually mean anything in reality.

The media needs to be fair and free, uninfluenced by corporate or government interests. Support independent media and pay to keep news free. Subscribe to Newslaundry today. Renault has stopped advertising on Republic Bharat. Will Nissan be the next? 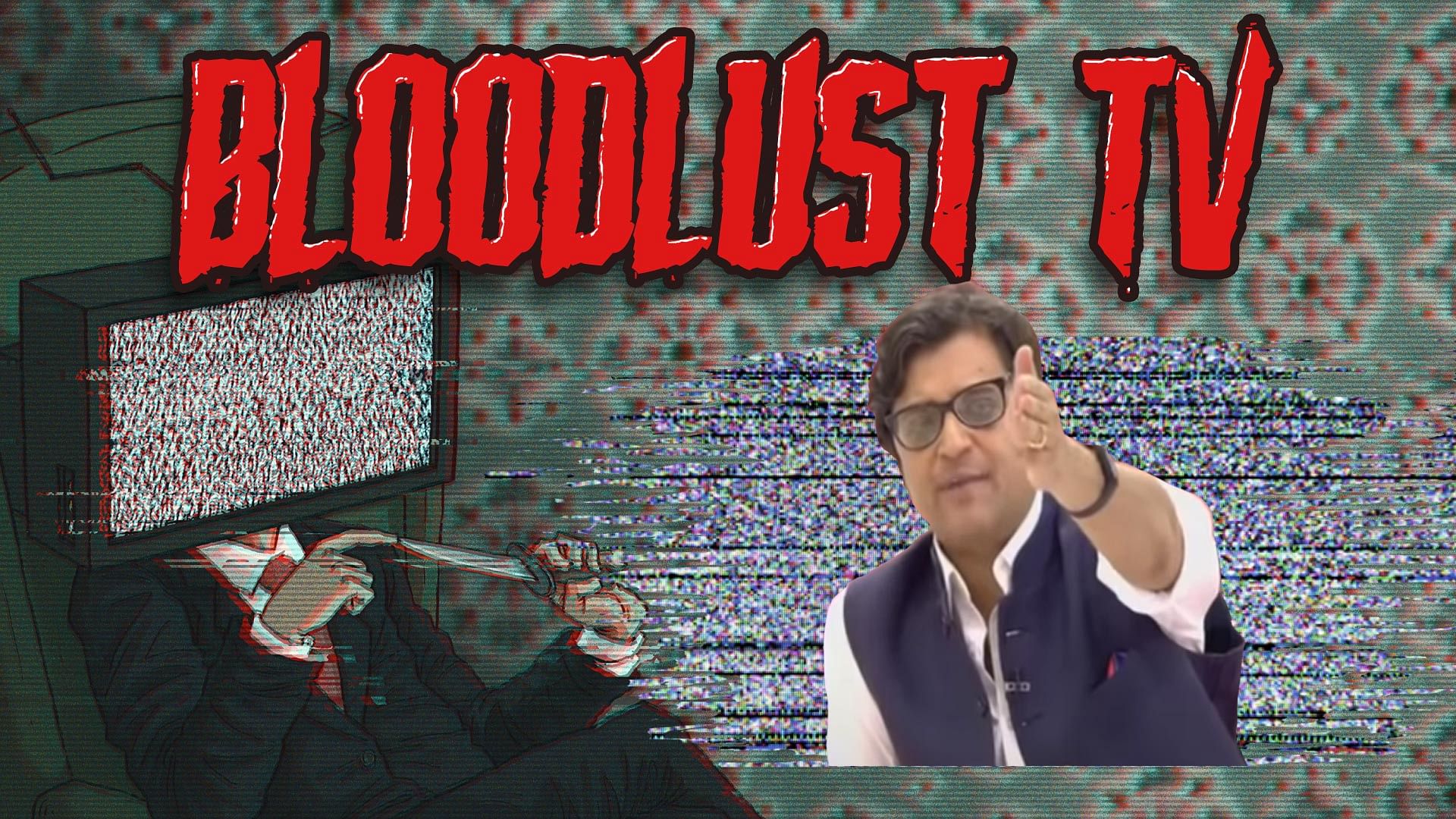