Panelists dressed as doctors and the studio was converted into a hospital ward. Because why not?

Avoid sensationalism and explicit descriptions, word your headlines carefully, and do not speculate or give undue prominence to stories on suicides.

If you tuned into ABP News last night, you’d be forgiven for assuming that the World Health Organisation’s guidelines for suicide reportage don’t apply to the TV channel. The media in general is guilty of it anyway: The circus that followed actor Sushant Singh Rajput’s death in June included reporters barging into the house to accost his grieving family members, theories that Karan Johar and Alia Bhatt were basically murderers, and how Rajput’s girlfriend might have practised “black magic” on him.

And yet. The good folks at ABP decided to take it one step further by staging a “postmortem” of Rajput, replete with its correspondent and “experts” dressed up as doctors, and an effigy that was literally strangled on screen to explain to viewers how Rajput might have died.

All in the name of journalism.

The programme at 9 pm, titled “Dark Room”, kicked off with the anchor explaining that despite the Mumbai police saying that Rajput died by suicide, everyone still wants to “know the truth” 50 days later. For the first time on TV, he said, a panel of “experts” would conduct a “Rehsya ka Postmortem”, or postmortem of a secret.

Please note that in attempting to examine ABP’s coverage, this piece will use language that describes Rajput’s manner of death. Newslaundry reached out to ABP News for comment; this piece will be updated if a response is received.

In a departure from its usual convention, ABP added a disclaimer for viewers, stating: “The aim of the show is to not influence or interfere with the investigation of Sushant Singh Rajput’s death.” No questions were taken as to why the show was, in that case, done at all.

In the segment, ABP’s Indrajeet Rai was joined by a panel of “doctors” to conduct the postmortem. While they all dressed up as doctors, the studio itself was turned into a hospital ward to give the programme a ‘realistic’ touch.

As one of the tickers helpfully pointed out, they were here to solve a mystery: “Sushant ke gale mai phaasi ke fande ki mystery.” The mystery of the hanging noose around Sushant.

Rai’s unfamiliarity with depression and mental health was evident when he began proceedings by asking Ranjan, “Aisa brain jo future ki planning kar raha ho, kya wo suicide jaisi baatein soch sakta hai?” Can a brain who was planning his future even think of dying by suicide?

Ranjan hedged her bets and replied, “It’s difficult to say but it’s possible. Maybe he was fed up with his life or he had many problems in his life. And the only solution he could see was suicide. But it’s also difficult to say since he was well-connected with society. He had plans for his life..."

Ranjan, who, as far as viewers know, was not Rajput’s doctor or his friend, also said, “Suicide can be impulsive, but Sushant was not one of those to take an impulsive decision.”

Then came the postmortem.

Gupta and Rai spoke at length about the “ligature mark”, what can be used as a noose for suicide, the effect of a noose on the human body, and the biological changes that lead to death.

Moving on to death by strangulation, Rai then strangled the effigy with the noose. Perhaps not since the death of actor Sridevi in 2018 has such harmful absurdity been passed off as news.

Gupta emphasised that Rajput was a “self-made man” who struggled his way to the top. He would not, therefore, take “an extreme step like suicide”.

In English: If Rajput had been “disconnected”, why weren’t questions raised by his parents and family? It is not possible, in Gupta’s esteemed opinion, that Rajput’s parents wouldn’t have known that their son had depression and suicidal tendencies.

Rai, Ranjan and Gupta then discussed whether Rajput had been blackmailed or under pressure. Rai was quick to say “I am not stating anything” and then said it anyway: “It can be suicide but it was because of pressure. What was the cause of the pressure? That the police have to investigate.”

The “experts” then moved on to speculate on how Rajput’s body had been found. At one point, Gupta demonstrated his point by pretending to strangle Rai.

Importantly, this show was brought to you by Dabur, SGT University, and Patanjali.

In his segment yesterday, ABP’s Akhilesh Anand joined the media party on black magic in a programme titled “Rhea Ki Tantrik Lila”. Anand described a mysterious puja, for which Rs 2 lakh was withdrawn. “Is Rhea connected to this?” he asked. “Was the money withdrawn for black magic?”

Because too much stupidity is bad for the brain, here is a précis of the programme through six screenshots. 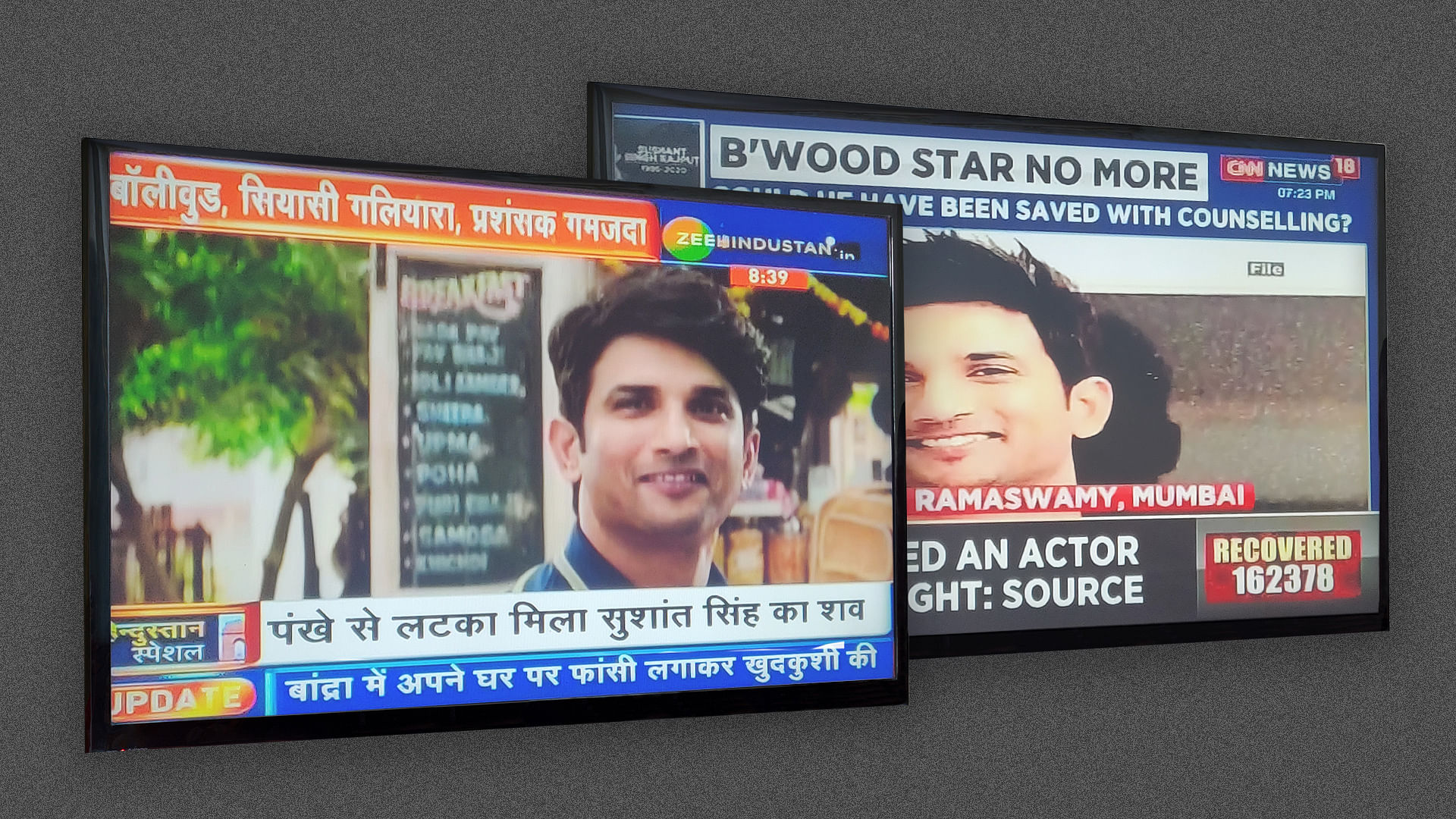