Saffron flags were planted on the gates of Subhash Mohalla’s Muslim locality, residents say it was accompanied with incendiary sloganeering.

It’s been six months since the February carnage in Delhi’s Northeast district. While life is limping back to normal after the pandemic-induced lockdown, the tremors of the riots are still being felt. The Muslim women of Subhash Mohalla in North Ghonda felt it first hand, when saffron flags came up on the gate of their locality shortly after the midnight of August 5, purportedly accompanied by incendiary sloganeering.

The local Hindus in the neighbourhood were celebrating the bhoomi pujan of the Ram temple in Ayodhya, and the celebration extended late into the night.

The gate of lane 2 in Subhash Mohalla

It was a sleepless night for the families living in lane 2 of the Subhash Mohalla. “Between 1 and 2 am on August 6, eight to 10 men were sloganeering ‘Jai Shri Ram’ outside our lane,” says Shaheen, 38, who runs a small shop here. “Then they raised obscene slogans like ‘Mullo bahar jao’, ‘Suaron bahar jao’.” Muslims, get out. Pigs, get out.

A green thread hangs loosely on the gate. Shaheen says it is a firecracker that the men hung from the gate last night and set off to ‘terrorise’ the Muslim residents.

The metal gates guarding the lanes came up after the violence in February, when 52 civilians were killed over 72 hours of unbridled rioting in Northeast Delhi. On February 25, a resident of a neighbouring lane in Subhash Mohalla was shot dead and another injured by a mob. Newslaundry had reported that eyewitnesses claimed that the mob consisted local Hindus, who have so far eluded arrest in the police investigation into the murder.

The lanes in Subhash Mohalla are slit by a thin street that sunders them into majority Hindu and Muslim neighbourhoods. So, while Shaheen and her neighbours were spooked by post-midnight sloganeering, the other side of the lane is populated with saffron flags embedded with ‘Jai Shri Ram’ in bold.

The Hindu-majority side of lane 2 in Subhash Mohalla

“Our lane is under siege,” says Ruksana, 42. “The electricity also went off last night and the men were trying to break the gate’s lock.”

The anxiety and fear among women here is compounded by the absence of more than half a dozen men from the neighbourhood, who are either in judicial custody or fleeing judicial custody, leaving women and children behind.

After the murder of 32-year-old Maruf Ali outside lane 3 during the riots, the police did not arrest the Hindus who allegedly fomented the trouble, but turned on Muslim men, four of whom are already under arrest in the case.

“People of our community were killed in the violence here, and now we’re being thrown into jail for it,” says Mohammad Dilshad, Ruksana’s husband, who is an accused in Ali’s murder, but is out on bail because of his declining health.

Shaheen, Ruksana and a dozen other women now sit nervously at the home of Mijra, 60, whose son, Mohammad Umar, left home soon after he was notified by the crime branch that he was a suspect in the February violence.

The women of lane 2, Subhash Mohalla in Northeast Delhi’s Ghonda

“Today they are standing and sloganeering outside our gate, tomorrow they will be inside our homes,” says Rubina Saifi, whose son Shoeb is under arrest for Ali’s murder. “The old fear has not subsided, and a new fear is entering our lives.”

Another woman, who wished to stay anonymous, told Newslaundry that she did not have a problem with the celebrations. “They celebrated with loud music and sloganeering all day. We don’t mind that. But why install flags on our gate and raise abusive slogans late into the night?” she asked.

The flags were also installed on the gate of lane 1 and 4. CCTV footage seen by Newslaundry showed four men walking outside lane 1 shortly after 1 am, with two of them tying a saffron flag on the gate. The CCTV cameras here have been installed for Shanno, who has claimed to be an eyewitness in Maruf Ali’s murder. In July, she was given police protection by the Delhi high court after her son and grandson were injured in a “road accident” on June 12. Shanno believes it was an attack on her family, staged as an accident.

“This is a provocative act,” says Saleem, 54, Shanno’s husband. “Hatred is seeping here slowly, and it is being fanned regularly. If all this wasn’t done with an ulterior motive, why did the camera outside lane 2 not capture last night’s incident?”

This camera has become a controversial device in Subhash Mohalla. After the riots, it was used by police to collect the stills of a gathering of Muslim men on February 24 and 25 — allegedly out to defend themselves and the local mosque — and turn them into accused in Ali’s murder.

On the morning of August 6, when the police arrived around 10 am and took off the two saffron flags, the women of lane 2 insisted that they investigate the camera’s footage. However, the police officers told them that the footage wasn’t recorded, deepening the women’s suspicion of foul play.

Newslaundry met the police officers present at the scene on the afternoon of August 6. “We inspected that camera, but it is only recording live footage. It is not storing any data,” said one inspector, on the condition of anonymity. “We’ve removed the flags to avoid tension. It is the doing of a few local men.”

Later in the day, Shaheen, Ruksana, Rubina and others drafted a complaint regarding the incident and sent it to DCP, North East, copied to PM Modi, Home Minister Amit Shah, among others. The complaint outlined a long trajectory of purported harassment of Muslims in the area, ending at the flags, firecrackers and slogans on August 6.

“Those who were involved in the riots hatched a plan to put up saffron flags and raise anti-Muslim slogans and threats last night,” the complaint states. It names local Hindus as potential suspects, who were also allegedly involved in rioting in February – allegedly associates of Karawal Nagar MLA Mohan Singh Bisht and former Mustafabad MLA Jagdish Pradhan.

An extract from the complaint of the women of lane 2, Subhash Mohalla

One of the men named in the complaint is Sonu, an auto driver. Interestingly, the wiring of the camera outside lane 2 goes through his home, making him the primary subject of the women’s suspicion. When Newslaundry met Sonu and his family, they dismissed the allegations of harassment and foul play.

“People were celebrating the bhoomi pujan here yesterday. We set off firecrackers on our side of the lane,” said Sonu. “The atmosphere has been so vitiated since the riots that if I go into their lane, they look at me strangely. I did not do anything improper. In fact, I saw the flags on the gate in the morning and removed one of them myself. I knew it would cause a scene.”

Ashok Sharma, the Bhajanpura SHO, told Newslaundry that the August 6 incident was trivial, but the conduct of the local Muslims was questionable. “The entire country celebrated on August 5. Why is there a problem in putting up flags? They weren’t put up on their [Muslim] homes. They’re trying to provoke the situation,” he claimed.

When told that the timing of the celebration — 1 am — made the Muslim residents anxious, Sharma said that he had inspected the CCTV footage and talked to the locals. “Everyone is alright now. We haven’t received a complaint yet. If we do, we will file an FIR accordingly.”

“We’re scared for our children and our elders,” says a determined Shaheen. “We will not take back our complaint. The rioters must be nabbed. The police are shielding them, and we have been told to rescind our complaints – and that is out of question.” 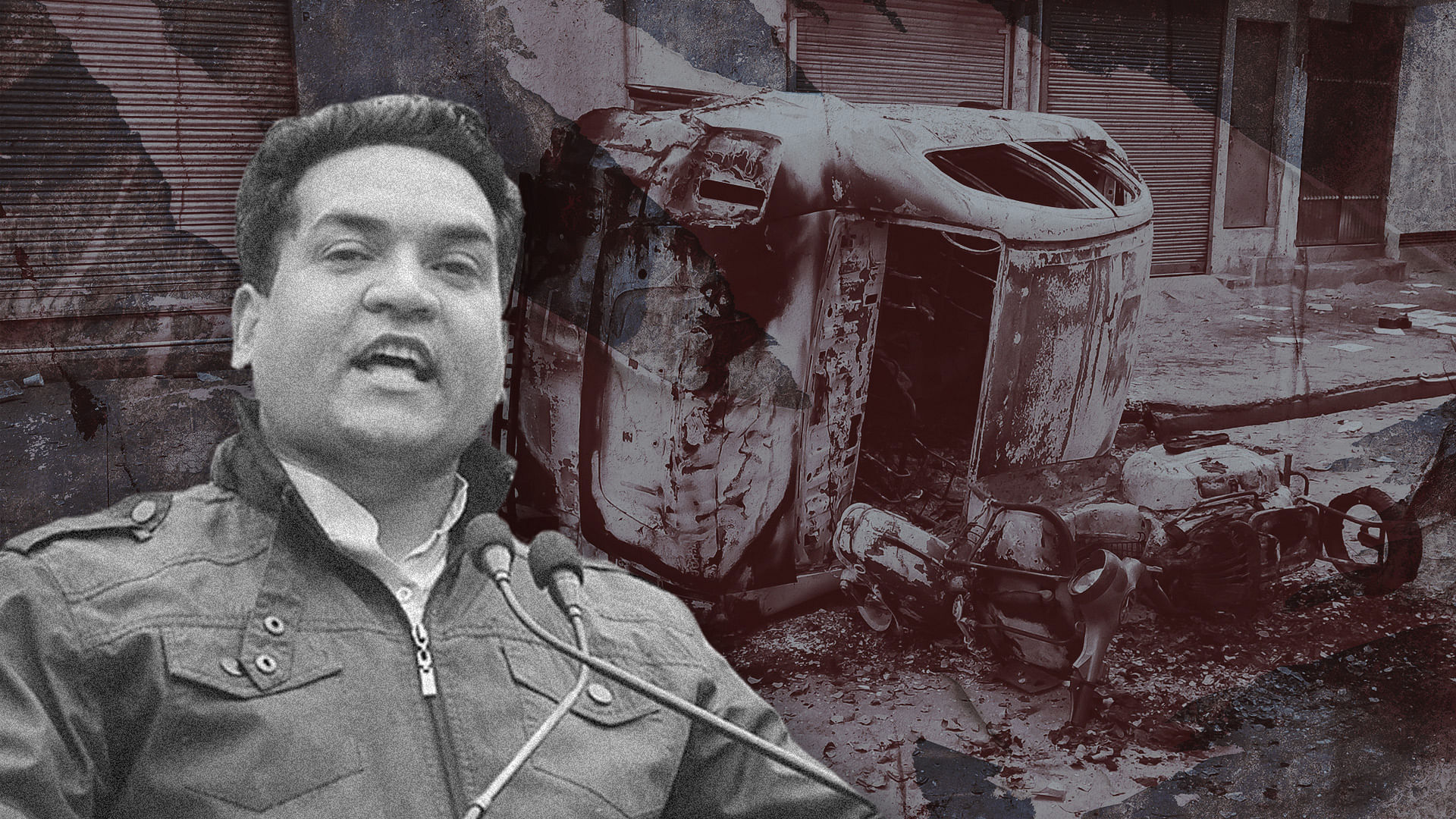