Local papers and news channels gave the tragedy a human face, and called the government to account.

These are words that consistently feature in mainstream news headlines, both national and local, year after year, when describing the floods in Assam. Coverage is usually limited to images, devoid of their human context, and statistics. The floods, whether in Kerala, Bihar or Assam, are given the same nonchalant approach as the annual monsoons, skipping the socio-political aspects of the issue.

Catastrophes rarely occur in isolation, and it’s no different in Assam. With some exceptions, mainstream news organisations tend to confine the death toll to a ticker during primetime news. But it’s the local media in Assam that allows the people suffering in inundated villages to articulate their stories.

Newslaundry examined the human interest coverage of the Assam floods by local news media during the period when the state population was worst affected. These reports are by the most popular news organisations in terms of circulation. Between July 15 and 24, at least 24 of Assam’s 33 districts were severely affected by the floods. This was also the period when, according to the Assam State Disaster Management Association, 84 percent of the state and 39 lakh people were affected.

Like its mainstream colleagues, the English print media in Assam also rarely deviated from overused words like “grim”, “serious” and “unchanged” while reporting on the floods. But the front pages of most, if not all, local newspapers carried at least one story on the floods.

The Assam Tribune, the state’s highest circulated English daily, took this one step further. Apart from daily front page updates, it regularly published several stories on the situation on the ground.

On July 16, when the highest number of people (nearly 40 lakh) were affected by the floods, the newspaper’s correspondent reported from Goalpara, the worst affected district in Assam. Travelling through inundated areas of Baladmari char, the report said:

“[This correspondent] saw thousands of marooned people, a majority of them still living in their houses submerged by rising water and unwilling to move out to safer places for fear that unknown persons or thieves may target and decamp with the valuables from their homes...A section of the flood victims complained that they are scared to leave the place and move to the relief camps for the fear of losing their dwellings and identity.”

Nearly 110 families had taken shelter on the embankment for 15 days, the report continued, describing the family of Binita Das, who made the difficult decision to abandon the relief camps and wait out the floods in their cowshed with their animals. Assam Tribune also brought to the fore the impact of erosion on agriculture, and how this leads to a price hike in produce sold in the Biswanath Chariali market. Combined with the impact of the pandemic on the economy, it’s an additional burden.

In a piece on July 22, the newspaper painstakingly reported on how damage is inflicted in small ways on embankments by displaced, panicked people. For example, people living along the Laokhowa-Dhing main embankment were digging holes to make toilets and store trash, which further led to rodents digging even more holes into the embankment.

While the story is an important insight into the lives lived by displaced people, it’s also a classic example of the reportage that Assam Tribune focuses on: stories that capture the authenticity of ground zero.

Assam Tribune also stood apart in another small but significant aspect: It did not limit itself to merely listing the death toll. Even a brief copy, such as the one below dated July 18, included context for the face behind the statistic.

In contrast to Assam Tribune’s human interest reportage, the Sentinel’s reports were more distanced. More often than not, the voice of the people affected was missing from its reports.

For instance, a report on July 18 described the devastating erosion taking place in villages in Baksa district. The report noted that a “number of houses were washed away” and that “local people” owning land about 10-20 metres from the river bank were worried about losing their land and livelihood. However, it didn’t include a single voice from these “local people”. This trend continued throughout most of its reports.

Another report on July 23, on two families in Lakhimpur who lost everything in the floods in less than half an hour, did not name or quote the families.

While the Sentinel did regularly report on updates on the floods, its details did not venture far from the state disaster management authority’s daily reports.

Asom Protidin and Amar Asom are the two leading Assamese dailies in the state. Both extensively covered various aspects of the floods, from the plight of animals, to the living conditions of people who continued to stay on in their homes, waist-deep in water, to how an exhausted one-horned rhinoceros in Kaziranga lay motionless by a highway. Their stories regularly focused on the loss of lives, homes and livestock.

Both Asom Protidin and Amar Asom were also consistent in passing the mic to the people so they could voice their demands. Reports highlighted the lack of government action, such as this one below about a starving family in Nalbari, Barpeta, who stayed in tiny shelters with their cattle.

News18 Assam/North-East provided in-depth, consistent and extensive reportage on the floods. Like the Assamese dailies, reports did not shy away from focusing on the discontent of the state’s residents. The clip below, from the 5.39 mark, showed frustrated citizens chanting “Himanta Biswa Sarma! Go back, go back!” and vowing not to vote for the health and education minister in the upcoming election.

The channel also used the debate format to tell stories of affected people, such as an old woman living with her daughter and granddaughter in Goalpara’s Dudhnoi. The programme highlighted her vulnerability, living in a village that floods at least four times a year.

“I have spent nights and days only crying,” she told the channel. “What is the point of living like this?”

As the anchor concluded in the programme, “But who can understand her suffering?”

News18 Assam/North-East also covered another aspect of the destruction wreaked by the floods. While the state disaster management authority issues numbers on hectares of farmland lost, the devil lies in the details.

In one of its reports, the focus was not just on damaged crops, but the futile efforts of farmers in Rangia Gaon who tried to catch small fish that had washed into their paddy fields due to the floods. The fish were insubstantial, both as a source of nutrition and as a source of income. The farmers were also struggling with bank loans that they could no longer repay, and were desperately seeking government support.

Prag News and DY365 followed a similar approach in covering the floods: dramatic background music accompanied by shocking visuals. It was an approach that turned the tragedy into a spectacle.

But this in no way takes away from the vast amount of reportage that Prag News and DY365 provided. From the lack of drinking water in flooded apartments in Guwahati city, to how Morigaon’s residents are dealing with the dual burden of the floods and maintaining social distancing — both organisations did not miss a beat in getting at the heart of the issue. Their reporters travelled to remote, inundated areas, standing beside the people affected and telling their stories.

The mood on the ground in Assam can be encompassed by a statement from a resident of a relief camp in Kamrup, as told to Times Now: Whether it’s the flood or the pandemic, the people of Assam are destined to die at the time.

It’s only through extensive, consistent and in-depth reportage that journalism can act as a catalyst to policy intervention and reform. The local news media amped up the pressure on the state government to implement a sustainable solution to this annual tragedy. It’s now up to the media, both local and national, to not allow this cycle of incompetence and negligence to go unchallenged, or to remain grim, serious and unchanged. 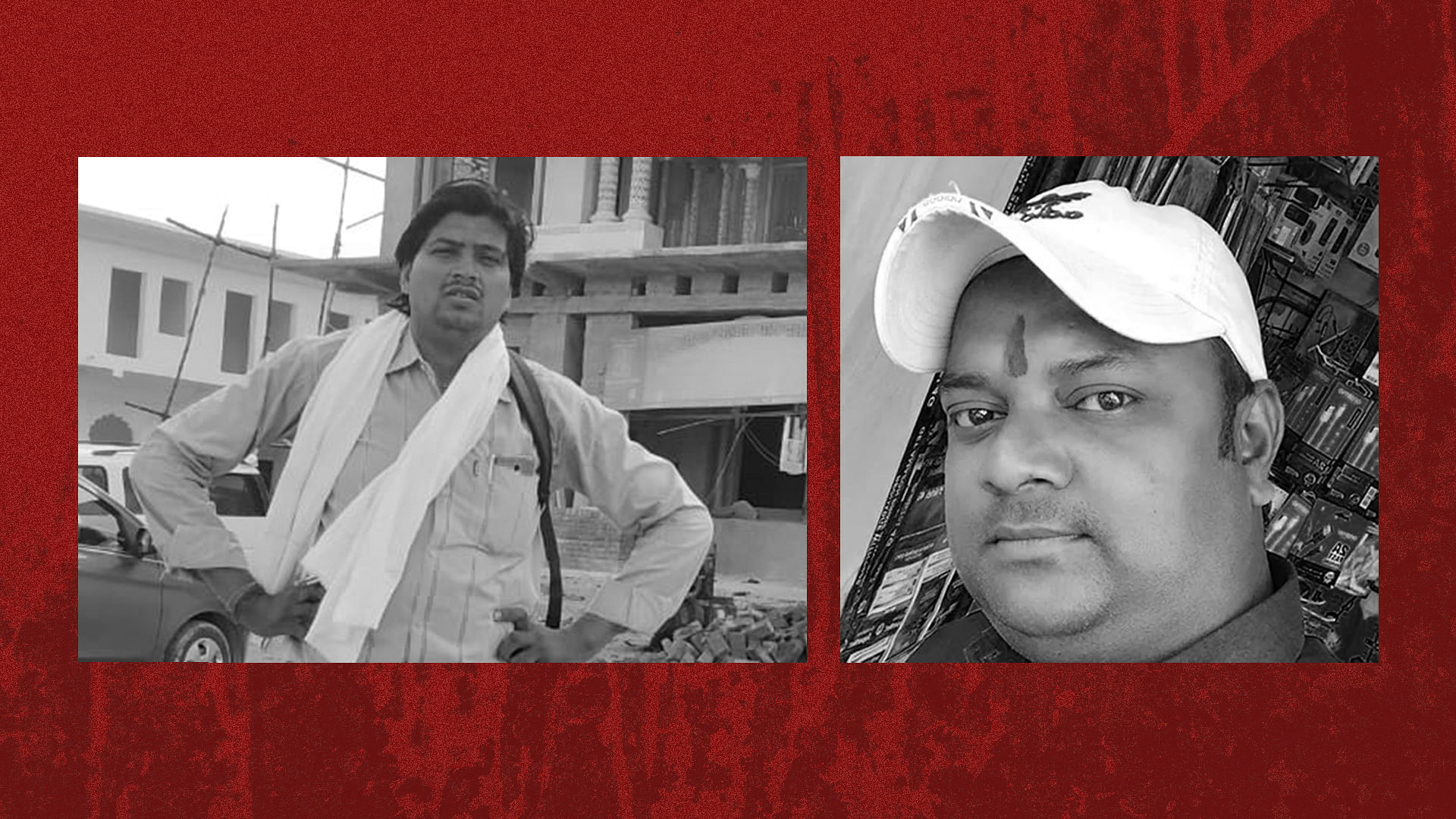 Police ignored complaints of Vikram Joshi and Sunil Tiwari. And the two journalists were killed