Coverage has been limited but some channels stepped up, bringing viewers ground reports on the devastation.

NDTV India’s primetime show on July 20 was noteworthy for more reasons than one. As calamitous floods ravaged Assam, NDTV conducted possibly the longest and most detailed discussion on the disaster, which strikes the northeastern state every monsoon.

For a region that’s often sidelined from Big Media’s gaze, NDTV’s feature, anchored by Ravish Kumar, was a much-needed departure on national television. It was also instructive on how to steer a discussion on an issue as complex as Assam’s annual floods.

As of July 21, over 24 lakh people in 24 districts of Assam have been affected by the floods, according to the Assam State Disaster Management Authority. Eighty-seven people have died.

“Widespread rainfall activity with isolated heavy to very heavy falls is very likely over Assam during next 2-3 days and rainfall intensity very likely to decrease thereafter,” said a press release from the Central Water Commission.

Even though the coverage of the floods was, unsurprisingly, limited to a handful of shows, most of the reports that did happen were detailed and nuanced. While NDTV India provided a detailed timeline of the situation and mitigation measures in the state, other channels had ground reports and primetime shows.

Here’s a selection of some of the coverage on Big Media TV news channels that went beyond token reporting on the devastating floods.

Floods have been an integral part of life of Assam for a long time. The story of the floods is essentially the story of the mighty Brahmaputra river, and NDTV India’s Ravish Kumar began his show with a historical account of the river to put the issue in a larger perspective. Kumar drew from The Unquiet River, historian Arupjyoti Saikia’s biography of the river, to trace its trajectory from Tibet.

Every year, about 31,500 sq km of Assam’s 78,400 sq km is submerged in the deluge. Kumar told his viewers that despite floods being a natural phenomenon, human intervention has aggravated the problem over the last 150 years. Some of these date back to as early as the mid-19th century. Kumar also explained how the erection of river embankments was touted as a solution after Independence, gaining currency after the massive earthquake of 1950. Unfortunately, this added to the increased devastation caused by the floods.

Floods have continued to drown the state despite flood control dominating the politics of Assam. Along with engineering plans, these politics have oscillated, Kumar pointed out, and the cost of this indecisiveness has been irreparable damage. He also detailed the operations of the Brahmaputra Board, formed by the Centre in the 1980s, and how it’s offered little change over the last 40 years. Flood control in the state is like a game of “snakes and ladders”, he said, and since 1857, efforts have taken one step forward and two steps back.

Kumar also detailed the impact of the floods this year, Goalpara in western Assam being the worst affected district so far. Over 50,000 people are sheltering in 301 relief camps, 110 animals have died in Kaziranga National Park, and the overflowing waters have damaged 1,606 roads, 164 bridges and 197 embankments.

In a villager’s country boat, correspondent Ashutosh Mishra navigated his way to the middle of Choudhury Bazar village in the Barpeta district. The report’s visuals bore testimony to the devastation wreaked in the district which, with a population of nearly two million, is consistently one of the most affected in Assam. Every year, the Beki, a major tributary of the Brahmaputra in western Assam, inundates large areas of the district.

“Life has completely been in difficult condition. This is not a one-day scenario but it goes for many days, perhaps many weeks,” Mishra told viewers. With most villagers submerged, people now live on the embankments and adjacent areas. Hundreds of people rushed to roadside shelters, often made of plastic sheets, with their belongings. Those who did neither moved to the few highlands in the area.

The India Today correspondent met with the family of Rafiul Islam, who made it to a patch of elevated land with their belongings and domestic animals. The family was living in a flimsy, makeshift plastic tent amid continuous rains.

“As rains have continued to pour, water is increasing. The level has risen by almost a hand since morning. If it rises by one more, we will have to evacuate this place and move elsewhere,” said a worried family member.

Home to the famed one-horned rhinoceros, the national park is annually swamped during the floods. As CNN-News18 reported, 378 sq km out of the park’s total area of 430 sq km has been submerged so far this year.

The channel’s camera panned to show large areas completely submerged on either side of the national highway. Correspondent Nilutpal Borah reported from the Burapahar range, explaining that many animals had taken shelter on artificial highlands created by the forest department inside the park. Several others, he added, migrated to the neighbouring Karbi Anglong hills to escape the deluge.

Floods present an opportunity to poachers, Borah said, and forest guards were being extra vigilant since the waters rose.

The rising flood waters in the lowlands forced dozens of animals to cross the national highway and move to higher areas on the other side. Several animals died from being hit by speeding vehicles, Borah said.

“That is why the forest department has introduced the system of time cards that monitor the speed limit of the passing cars,” he said. The road cannot be blocked as it connects Upper Assam with Lower Assam.

TV9 Bharatvarsh from a relief camp in Kaziranga

Every year, thousands of people head to temporary relief camps as floods wreak havoc upon the state. They pop up in different forms: from makeshift tents by the road to vacant school buildings. Flood victims are often cramped into these spaces and are provided basic rations by the government.

These arrangements are particularly alarming in the midst of a pandemic. TV9 Bharatvarsh highlighted these issues from one such school-turned-camp in Kaziranga.

“When the coronavirus is spreading fast all around the world, and over 40,000 cases are being reported [daily] from India, look at the situation here: around 700 people are living in this tiny school,” said the channel’s correspondent, Shubhankar. Flood victims were sharing space with domestic animals too, including goats and hens.

TV9 Bharatvarsh took viewers into the camp, where 10 families were staying in one room. There was only one washroom for all the residents, Shubhankar reported. Families received rations only once this month: one kg of rice per person along with some dal.

“There is no presence of the coronavirus here as yet,” he said. “But just imagine: what would happen if it were to appear here among so many people?”

In addition to these, Republic TV broadcast three or four ground reports from central and eastern Assam, which were also packaged as a 14-minute programme on July 20.

Importantly, Republic discussed the Assam floods in only one of its primetime debates, giving four minutes of screen space to the ground reports. In contrast, the channel had three primetime debates on Bollywood and the death of actor Sushant Singh Rajput. Considering Republic’s editor-in-chief, Arnab Goswami, hails from Assam, he would have done well to have broken the Big Media trend and pursued the catastrophe in more depth.

In one of the ground reports, Republic’s Anil Poddar reported for the channel from Dibrugarh, telling viewers that residents here also face the issue of erosion, which leads to loss of property and agricultural land every year. Situated in the easternmost part of the state, Dibrugarh stands next to the Brahmaputra. The town is protected from the river by a dyke that extends over eight km. While the barrier saves the town from rising waters, other areas in the district get severely affected.

Moreover, when severe floods occur, people who live on riverine islands called chaporis in many parts of Assam move to the nearby banks. Republic interacted with one such group as they descended from their boat, with a sea-like Brahmaputra raging at the backdrop.

Overall, however, Big Media has been widely criticised — and rightly so — for largely ignoring the crisis in Assam, or relegating it to a footnote. There’s a lot of insanity that passes off as news on television, as our Newsance series will tell you, and it isn’t a big ask for a state-wide catastrophe to receive equal coverage. 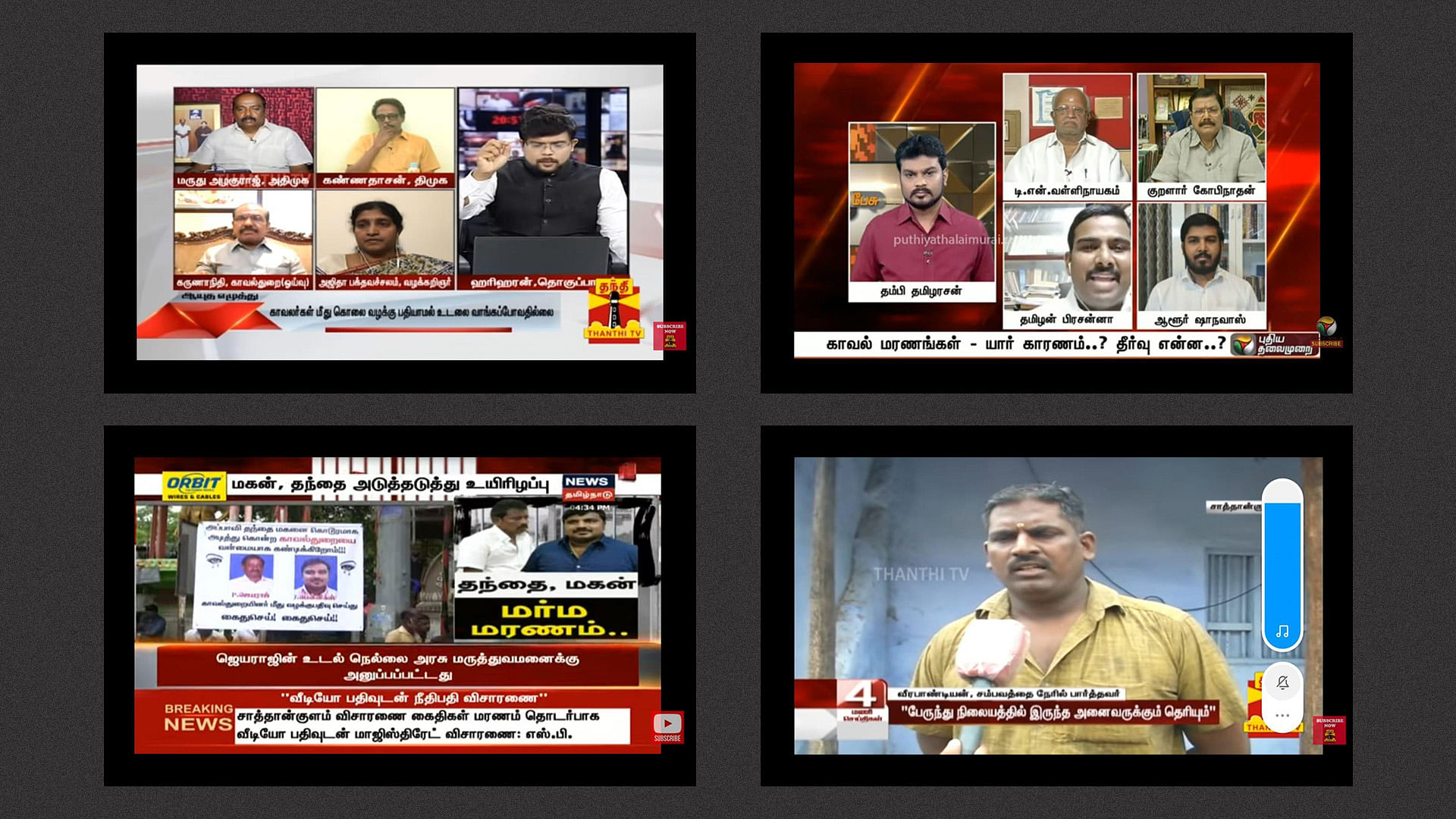 Thoothukudi custodial deaths: How the Tamil Nadu media prompted action against the cops