“About a year and a half ago, my son came home after playing and asked what I had cooked for lunch. ‘Only rice,’ I told him. Hearing that, he went out again and returned in the evening. He asked if he should go to Jaipur to find a job. I refused. The next day, when we were at work, he left with his Aadhaar card and clothes. We looked for him everywhere but he was nowhere to be found. He called a few days later and told us that he was working in a bangle factory in Jaipur. He said, ‘Don’t you worry. I’ll earn and send you the money, don’t eat bland rice.’ He used to send money every month. We spoke to him during the lockdown, but a few days ago we were informed that he was dead. We had begged him to come back but he didn’t. Now even his body hasn’t returned.”

Sujata Manjhi, 55, broke down while recounting her tragedy. Sujata is a single mother of six. Her husband died a long time ago. “I have six children, I feed them from what I earn,” Sujata said. “When he was young he ate everything but after he grew up and started hanging out with friends, he didn't like the food at home.”

Sujata’s son, Shashikant Manjhi, left his home in Bhimpur, a village 45 km from Gaya city, in May 2019 in search of a job. He died a year later, in May 2020, in Jaipur. His family couldn't bring back his body because of the coronavirus lockdown. His body was cremated in Jaipur and a symbolic cremation was performed in Bhimpur using an effigy made out of straw.

None of his relatives or neighbours could accurately recall his age but their responses indicated Shashikant was fairly young. His sister-in-law pointed towards a boy, “When I got married, he was this young. He must have been 15 or 16 now.”

Had Shashikant gone to Jaipur alone?

“I asked my son many times, but he did not tell me. Everyone says a middleman took him there,” said Sujata. “He had never been outside Gaya so how could he go alone that far?”

‘I thought my son was dead’

Most people in Bhimpur belong to the Musahar community. Traditionally stigmatised as rat eaters, they are one of the most marginalised caste groups, socioeconomically and politically. In most villages, they reside on the southern edge.

Most of the Musahar population in Bihar is concentrated in and around Gaya district. Historically, the community has been subjected to exploitation, often forced to work as bonded labourers for the rich. Now, many of them work in brick kilns across the country. As education and employment is scarce for the Musahars, their children are routinely lured away by middlemen with promises of work and taken to cities such as Jaipur. Once there, the children are made to work for up to 20 hours a day, beaten up and exploited.

Shashikant and his family are among the victims of this exploitative system.

Malti Devi lives in a tattered hut, five hundred meters from the Pali village market. Her son was separated from her for two years and she had come to believe he was dead. He wasn’t.

Her son Nipu, 13, said, “One day I was standing by the road. A man came on a motorcycle and asked me if I wanted to study. He said not only would I get to study but paid as well. He gave me a thousand rupee note. I was only 10 years old at the time and had never seen that much money. I went with him and he took me on a train.”

“I was never sent to a school, even for a day. They put me to work making bangles. There was one room in which six-seven children of my age lived. They used to make us work from 10 in the morning till 2 at night and they beat us if we didn’t work,” Nipu said. “They didn’t let me speak with my parents for two years. I didn’t have much information, so I couldn’t even run away from there. One day, I went to get some supplies to make bangles and some police officers started following me as I was returning. I didn’t know them so I came back to my place of work. Not long after, the police came and took us to the station. After a while, we were moved to another place where we stayed for some days. We were sent to Patna and from there and I returned home. I saw my family after about two years.”

Nipu lived in Jaipur for nearly two years and worked almost 20 hours a day, but he wasn’t paid a penny by the middleman or the factory owner.

“When he disappeared we searched everywhere. When we couldn’t find him we thought he was dead, but he returned,” said Malti, a mother of six. “They lured him away with money. We don’t earn enough to feed our children well. His father works in a brick kiln.”

Did they go to the police after her son had disappeared? Malti didn’t answer.

It’s perplexing that most people from the Musahar community don’t go to the police if their children disappear.

Acute poverty and deprivation has forced a few parents in the community to even consent to their children being taken away. Newslaundry met one such family in the Gaya district.

Ganesh Manjhi lives in Kochi Barma village of Gaya. He sent his son Sanjeet to work in a bangle factory in Jaipur. Sanjeet would get Rs 200 a week for expenses, and another Rs 5,000 a month that he would send home. Sanjeet was caught by the police, however, and sent back home.

Why did Manjhi send his child to Jaipur? “We don’t have any money to run this household. We don’t own the land we live on,” he replied. “How do we take care of our children and educate them? I sent him because we don’t have the means of subsistence and he couldn’t study here anyway. Outside, at least he’ll earn and send something home.”

Amit, a resident of Manji’s village, accompanied Sanjeet. Amit is currently under quarantine in Jaipur after his rescue by the police. His mother, Anar Davi, told Newslaundry, “He has only studied till class 8. His sisters at home are growing up and they have to be married. We had no income at all and after the situation worsened during the lockdown, we asked him to go. He was on the way when the police nabbed him. He hasn’t returned home yet.”

Though there are various welfare schemes for marginalised communities such as the Musahars – subsidised ration, free LPG cylinders – they are far from adequate. Many families, for example, don’t earn enough to refill the LPG cylinders given to them under the Ujjawala scheme. Some like Anari Devi haven’t even received a cylinder yet. She still cooks on open fire.

Centre Direct works to prevent child labour in Bihar. Vijay Kewat, who is associated with the NGO, said, “At least 500 of the children rescued from Jaipur between 2017 and 2020 were from Gaya district alone. Most of them came from the Musahar community. The main reason for this is poverty and illiteracy.”

Kewat said the traffickers entice the children with money. “If they fall for their scam, it’s extremely profitable. They take them away by giving them some money, but once there the children are made to work without pay. They target children between the ages of 5 and 15, sometimes they even entice the parents. Some parents fall for the money and send their children. The trafficking of the children continued during the lockdown.”

Nothing changed even after Jitan Ram Manjhi

The election season is in full swing in Bihar and political analysts have been talking about the caste dynamic. It doesn’t seem to feature the Musahars, the third most populous community in Bihar. One does not even hear a mention of the community and their struggles in mainstream political discourse, even though former chief minister Jitan Ram Manjhi comes from the community.

About 2 km from Manjhi’s village, Mehkar, are Ramrati and Parvati Nagar, home to populations of the Musahars.

Nitish Kumar has often promised a water connection in every village, but people in Ramrati and Parvati Nagar are still living with an acute shortage. There is a tap in Ramrati Nagar, but it doesn’t supply enough for the entire population. Parvati Nagar has two taps but they only work occasionally. The villagers have to fetch water from an adjacent village, where they often feel unwelcome.

Has anything changed for the Musahar community in Bihar since Manjhi was chief minister five years ago?

In an interview given to Newslaundry, Manjhi said most families now had their own homes and electricity.

There’s a “common schooling policy” in chief minister Nitish Kumar’s election manifesto. Manjhi said that if implemented, the policy would ensure quality education for all. The Bharatiya Janata Party’s election song declares, “Bihar mein e ba.” Bihar has now changed. They probably forgot to include images from these villages.

In Pali village, we met Haricharan Mochi. Asked if he had seen any of the changes that the politicians talk about enthusiastically, he replied, “What change? I am 70 years old. Even today I must earn to eat. All my sons live elsewhere. They don’t earn enough to send money to me. Yes, I vote but nothing comes from it. Lalu Prasad Yadav gave us a house, Nitish Kumar gave us electricity. Nobody gave us food.”

A version of this report was previously published on Newslaundry Hindi. 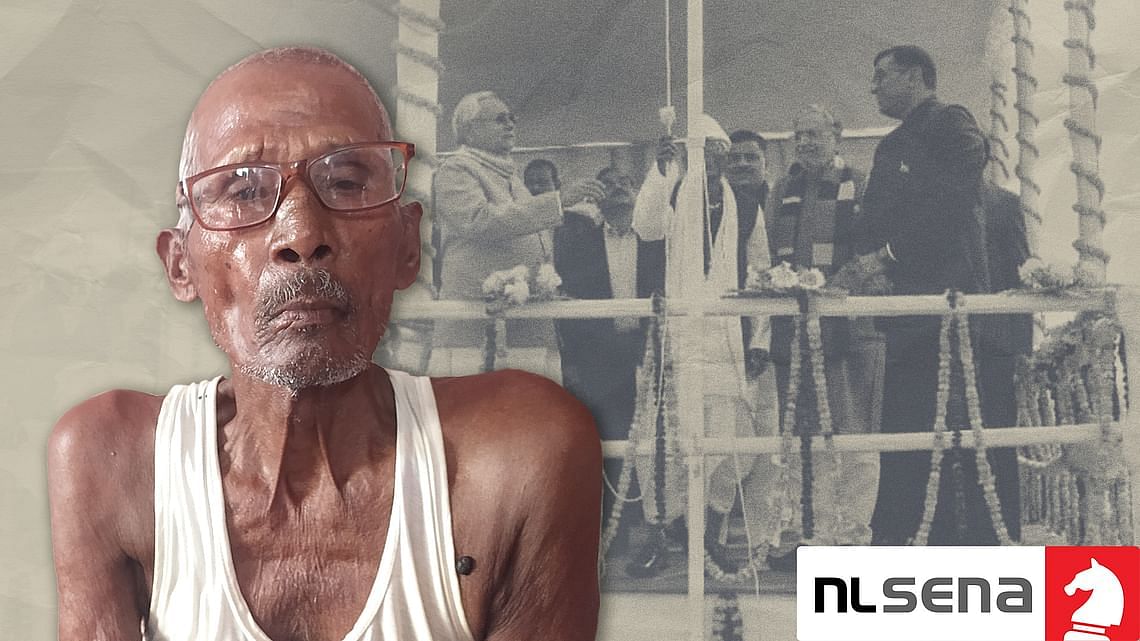 Nitish Kumar had Jhapsi Mochi hoist the flag on Republic Day. What did it get the elderly man?