Over two decades he became the brand that he is today, despite numerous whispers of wrongdoings.

In 1997, a spiritual leader started a column in Ananda Vikatan, a weekly Tamil magazine published out of Chennai. Vikatan was a big name in the world of Tamil news and reporting – and still is, in terms of its reach and circulation – so the decision to hand over precious column space to a so-called “guru” raised a few eyebrows.

But the decision paid off. The column, titled “Manase Relax Please”, or "mind, relax please", was authored first in 1997 and then again in 2003 by Swami Sukhabodhananda, and did so well that Vikatan commissioned the column again in 2004, this time helmed by a little-known “guru”. Spiritual advice was clearly good for business, and why wouldn’t a magazine want to cash in on it?

The writer of Vikatan’s second spiritual series, this time titled “Athanaikkum Aasaipadu”, or the desire for everything, was a man who already had a staunch group of followers but was yet to attain the national, and international, prominence that he has today.

This man was Jaggi Vasudev.

Sukhabodhananda’s column might have generated interest in the idea of spiritual writing for Vikatan’s readers, but the traction Vasudev’s writings got was all his own doing.

And Vasudev was quick to capitalise on it. In September 2007, he launched a monthly magazine called Kaattu Poo, whose readership mainly comprised his followers.

His reputation as a thoughtful, spiritual advisor to Vikatan’s lakhs of readers was established. And three years after his column began, he was also building a political bank of support.

In 2006, M Karunanidhi, the head of the Dravida Munnetra Kazhagam, was chief minister of Tamil Nadu. Karunanidhi lived according to the Dravidian principles of atheism and rationality, critical of seers and saints, but Vasudev seemed to be the exception to this rule.

“He was introduced to Karunanidhi by senior journalist A Kamaraj from Nakkheeran,” said “Savukku” Shankar, who claimed he had “personally verified” this, though Kamaraj denied the allegation to Newslaundry.

Kamaraj was the associate editor at Nakkheeran news magazine in 1999 when forest brigand Veerappan kidnapped Kannada film actor Rajkumar. The magazine’s founder and editor Gopal was sent by the DMK government to the forests of Sathyamangalam to negotiate with Veerappan, with Kamaraj acting as his liaison on the outside. As a result, sources told Newslaundry, Kamaraj grew close to the DMK chief during this time.

Kamaraj was also a follower of Vasudev, who then asked that he be introduced to Karunanidhi. “Kamaraj introduced him, and also convinced Karunanidhi to take part in an Isha Foundation event at Anna University,” Shankar said.

The event in question took place on September 23, 2007, at Chennai’s Anna University. It was a tree plantation ceremony attended by both Vasudev and Karunanidhi and in a speech, the latter showered praise on the former, saying the world would become a better place if people followed in Vasudev’s footsteps when it came to taking care of the environment.

Journalist V Anbalagan told this reporter that Vasudev had “no political access” until he met Karunanidhi in 2006. “Vasudev used to come to Chennai to meet Karunanidhi,” he said. “Once he got access to the DMK’s close circles, his reach became widespread. Before he came in contact with the DMK, no politician even entered the Isha Foundation.”

He added: “But once he got into political circles, there was no looking back.” Politicians aside, Vasudev soon collected a bevy of filmstars, bureaucrats and businessmen as his followers.

Kamaraj, however, flatly denied initiating a meeting between Vasudev and Karunanidhi. “I am a journalist, “ he told Newslaundry, “who had interacted with both the DMK chief and Jaggi Vasudev, as I have done with major personalities of the state. To attribute motives to such interactions is belittling, to say the least.”

From print media and politicians, television was a natural step in Sadhguru’s road to success.

In 2008, Tamil entertainment channel Star Vijay launched a new show named after Vasudev’s Vikatan column. Athainaikkum Aasaipadu began broadcasting for a half-hour slot on Sunday mornings, with Vasudev sitting down with the guest of his choice to chat about spiritualism, social issues, yoga, culture, global warming, love, divorce, even whether it was okay to eat non-vegetarian food.

His guests were all celebrities in their chosen fields, across music, literature, cinema and politics, including actors Vivek, R Parthiban and Crazy Mohan; Carnatic vocalist Sudha Raghunathan; and even Viduthalai Chiruthaigal Katchi leader Thol Thirumavalavan. Vasudev played host and the interviews were filmed in his ashram headquarters outside Coimbatore.

“The programme was unique,” said an Isha volunteer, on the condition of anonymity. “A spiritual guru interviewed by famous personalities – it was an interesting thing to watch. It helped Sadhguru become more prominent across Tamil Nadu.”

In November 2010, Isha Foundation launched its own version of Athanaikkum Aasaipadu, called In Conversation with the Mystic. The concept remained the same, but the programme was shot in front of a live audience and the glamour quotient was pumped up: guests included names like Juhi Chawla, Anupam Kher, Kiran Bedi, Kiran Mazumdar Shaw, Barkha Dutt and Arnab Goswami. Shekhar Kapur was the first guest to sit down with Vasudev.

Over the years, Bollywood stars like Ranveer Singh and Kangana Ranaut, and cricketer Virendra Sehwag also sat down to converse with the mystic. The programme is a ticketed event, and Vasudev soon launched companion programmes too, such as Youth and Truth where he would interact with college students at renowned universities, from India’s IIMs to the London School of Economics.

But not all these programmes go smoothly; in 2018, during an episode of Youth and Truth in Hyderabad’s Nalsar University, students began asking him questions which clearly took Vasudev by surprise. One student asked whether permission had been taken for the Isha Foundation to build through protected elephant corridors in Tamil Nadu, and asked him why he said women could not enter certain temples.

Prerna Dhoop, a former assistant professor at Nalsar who was present during the event, pointed out that Nalsar’s students are “trained in critical thinking”.

“When they asked questions on complex issues, the answers were extremely simplistic and one-sided,” she said. “This event...reflects how our youth is exposed only to Sadhguru’s version of reality...While having considerable control over important communication channels, including print and social media, he also has the support of the ruling class and has significant influence within the government. This rare combination of power, prestige and privilege can create disaster in our liberal democracy and diverse society."

Since February 2021, Vasudev has also had a regular radio show on Big FM, titled Dhun Badal ke toh Dekho, where he delivered his opinion on topics like health, spirituality, youth, relationships and religion. Newslaundry could not verify the terms of Big FM’s collaboration with Vasudev or Isha Foundation.

But at the end of the day, Vasudev no longer needed magazine columns or TV shows to promote his brand; he was doing it himself. The internet was now building brands and reputations, and Vasudev was quick to jump on the bandwagon, with millions of followers across platforms, and across languages. His foundation had centres across India and even the world, and a network of 4,600 full-time volunteers and nine million part-time volunteers.

Volunteers are not paid for their work; they qualify to work for Isha by going through a mandatory programme of “inner engineering”. Their work for the foundation includes social media, IT development, brand strategy, writing content, shooting and editing videos, organising events, fund raising, and a lot more, including day-to-day work like cooking and cleaning in the ashram.

“All the volunteers work free of cost,” said a former Isha volunteer who left the foundation due to family commitments, though she often visits. “Many of them are experts in their fields and provide their free services for the promotion of Sadhguru.”

“Isha Yoga” is one of Vasudev’s biggest products, purportedly “designed by Sadhguru” and defined as a “comprehensive system that integrates the core of yogic science and presents it for the modern human being”.

Prabhakhar was a spiritual guru and yoga teacher who devised Siddha Samadhi Yoga in 1974 in Bengaluru. He had studied under Maharishi Mahesh Yogi in Switzerland before returning to India. Vasudev studied under Prabhakar in Gommatagiri near Mysore in 1984.

“Jaggi and I learned Siddha Samadhi Yoga from Rishi Prabhakar together at Gommatagiri near Mysore,” said an Andhra Pradesh based yoga teacher who had trained with Vasudev. “Jaggi joined guruji [Prabhakar] in 1984...He met his wife there; she was a volunteer and trainee.”

Vasudev in the middle row, third from left.

Vasudev sitting on the ground, third from right.

Vasudev had “no previous association” with yoga until he trained in Siddha Samadhi Yoga, the source said, and then went on to teach Prabhakar’s yoga in Hyderabad, Bengaluru and Mysore between 1986 and 1987. “Guruji then sent Jaggi to Coimbatore to establish a centre,” he said. “But when he went there, he separated from guruji and began his own Isha Yoga.” Isha Foundation was set up in 1992.

Subramanian Reddy, a Siddha Samadhi Yoga teacher, said, “Jaggi Vasudev was among the finest teachers of Siddha Samadhi Yoga. He was also close to guruji. But he suddenly broke off with him and started teaching yoga in Coimbatore .Whatever Sadhguru teaches has been taken from Rishi Prabhakar’s courses.”

Update: The translation of "Athanaikkum Aasaipadu" has been changed to "desire for everything". "Manase, relax please" has been translated as "mind, relax please". It's also been clarified that journalist Gopal was sent to negotiate with Veerappan by the DMK government.

This is the second in a three-part series. 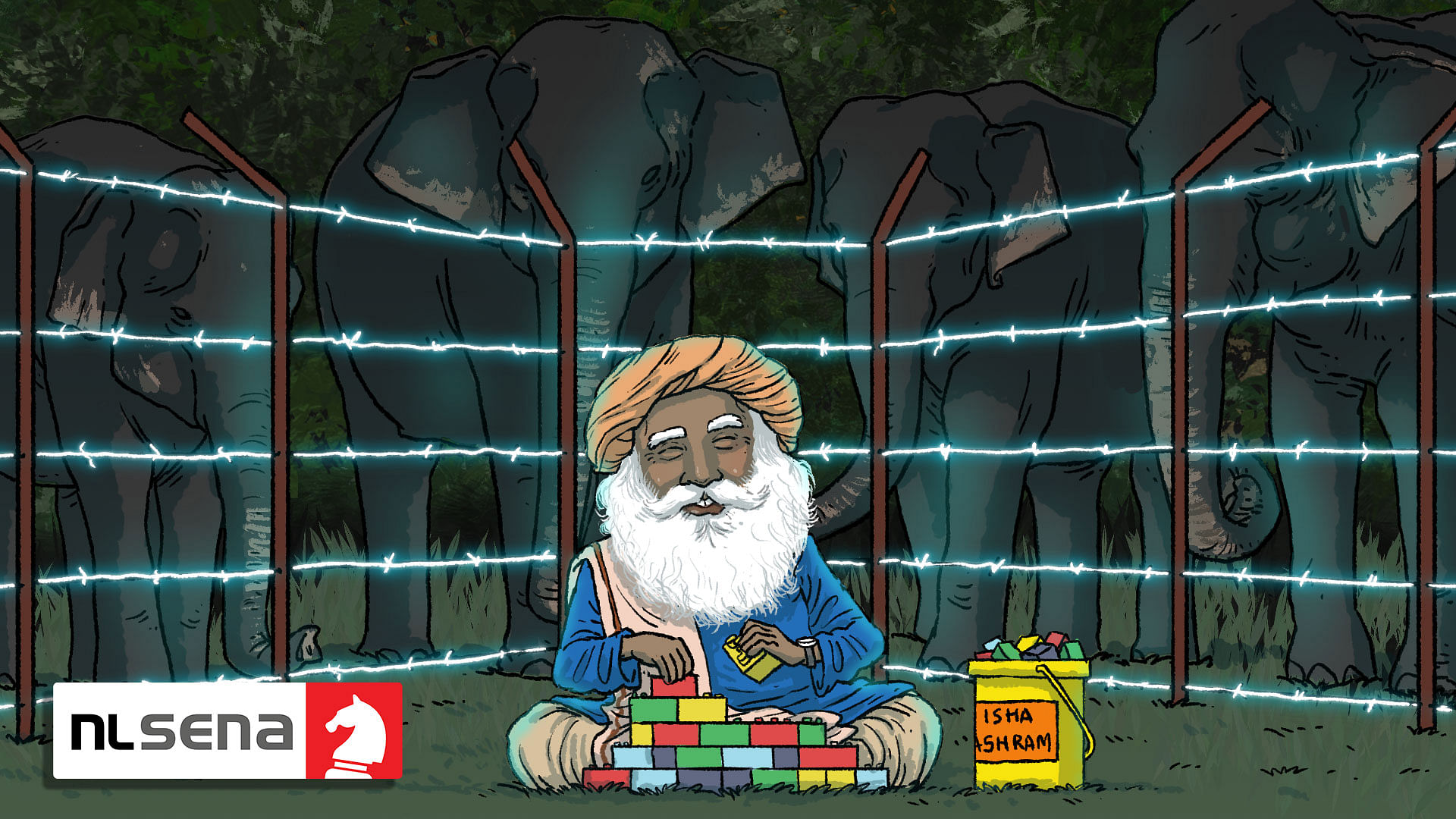