Does Ramdev really speak for ayurveda? No, according to ayurvedic practitioners

The general belief is that Ramdev isn’t qualified to be an expert on ayurveda and incorrectly conflates it with yoga.

“If I treat patients and provide factual evidence, if I talk about research-based yoga and ayurveda – then how is any of what I say inaccurate?”

This is what self-proclaimed yoga guru Baba Ramdev said during an interview to News18 on May 31. Ramdev claimed he had scientific evidence to prove the legitimacy of ayurveda in “curing” hypertension, cancer, arthritis, thyroid issues, liver sclerosis, hepatitis, and fatty liver.

The interview took place even as Ramdev was in the eye of a storm following his comments that modern medicine is a “stupid science”. He gave a slew of interviews to news channels to further attack modern medicine for what he alleged are “abuses” by the pharmaceutical industry. He also made unproven claims about pioneering ayurvedic solutions to longstanding medical conundrums.

Having cofounded Patanjali along with billionaire Acharya Balkrishna in 2006, Ramdev has come to epitomise the practice of ayurveda and yoga in the public imagination. With the launch of the Patanjali Research Institute in Haridwar in 2017, Ramdev and Balkrishna recognised the “need for scientific evidence-based research” to cement ayurveda as a scientifically accepted practice and make India a “prototype for the rest of the world”.

But when it comes to ayurveda, what expertise does Ramdev actually possess?

“Ramdev is just a good businessman,” said Anand Pandey, who has been practising ayurveda for a decade at a Varanasi-based clinic. “If anyone wants to practise ayurveda in India, they have to do a bachelor’s degree in ayurvedic medicine and surgery. Later, one may opt to do an MD or MS too. Ramdev has none of these degrees so, as far as I can see, he is nothing but a jhola chhaap.”

Under the Central Council for Indian Medicine – a statutory body under the Ayush ministry – the medical qualification required to practise ayurveda is, as Pandey said, a bachelor’s degree in ayurvedic medicine and surgery, or BAMS. This is a mandatory requirement. BAMS is a five and a half year degree with four years of coursework and one and a half years of apprenticeship. Those who want to be pharmacists must pursue a separate B. Pharma degree, not BAMS.

When it comes to yoga, most of the people Newslaundry spoke to took care to distinguish between ayurveda and yoga.

Rasik Pawaskar, an ayurvedic practitioner, taught ayurveda to BAMS and MD students from 1995 to 2009 at Bharatiya Vidyapeeth deemed university in Pune. He’s been practising ayurveda since 1991 and now runs a private clinic.

He said, “Even though yoga and ayurveda draw from the same vedic sources, they have different objectives. While the objective of yoga is specifically moksha, the objective of ayurveda is health or swasthya. The concepts and practice of both may overlap, but should not be confused as the same.”

He added, “While Ramdevji might be a yoga guru, he should not be the face of ayurveda since they are technically not the same.”

What does Pawaskar think of Ramdev’s claims about ayurveda as a cure-all for multiple health issues?

“So, for example, there is no diagnosis called ‘hypertension’ in ayurveda,” Pawaskar explained. “No vaidya will say to their patient, ‘You have hypertension and I can cure it.’ This is a modern medicine diagnosis and ayurveda will have an independent diagnosis. The same will be true of any diagnosis in modern medicine. This is because one must understand that ayurveda is a completely independent system of medicine, and will take recourse to treating the problem in a completely independent way.”

“You have to treat every single patient in ayurveda individually,” he said. “It has an inherently customised approach. If two people approach a vaidya for the same ailment, they will be prescribed individual medication. One cannot have a general prescription or protocol. You will find that most experienced vaidyas will not rely on over-the-counter prescriptions. In this regard, a medicine like Coronil, which operates as a general prescription, may not be helpful from an ayurvedic perspective.”

The perils of Patanjali’s research

Yet Ramdev has often claimed to possess irrefutable cures for all sorts of diseases. Inaugurated in 2017 by Prime Minister Narendra Modi himself, Patanjali Research Institute in Haridwar was opened with the express ambition of gathering scientific evidence for the efficacy of ayurvedic medicines. The Institute boasts of several departments doing research on areas ranging from taxonomy to drug development. Moreover, Patanjali claims to have over 4,700 retail outlets selling their medicines in India.

Patanjali’s Divya Mukta Vati Extra Power, for instance, claims to cure hypertension and high blood pressure. Patanjali’s website even says this has been concluded after “successfully experimenting with millions of patients”.

Now, in order to “successfully experiment” a drug, you need to register a trial with the Clinical Trial Registry India. This registration, which needs to happen before the “enrollment of the first participant”, must be done by “any researcher who plans to conduct a trial involving human participants, of any intervention such as drugs, surgical procedures, preventive measures, lifestyle modifications, devices, educational or behavioural treatment.”

Divya Mukta Vati Extra Power is one of the few Patanjali medicines that shows up on the Clinical Trial Registry India website with a registered trial. However, this trial is still underway; it was registered on October 12 last year and needs 18 months to complete. The trial sheet mentions that the sample size for the trial is only 50 patients and not a million.

Patanjali cofounder Balkrishna has also managed to publish academic papers on yoga and ayurveda in over 150 publications as a co-author. These publications include open access journals- journals where there is no paywall for access- like Phytomedicine, which published the infamous Coronil study that had a sample size of merely 100 asymptomatic patients, and Frontiers in Pharmacology. This despite long-standing allegations that his degrees are fake. 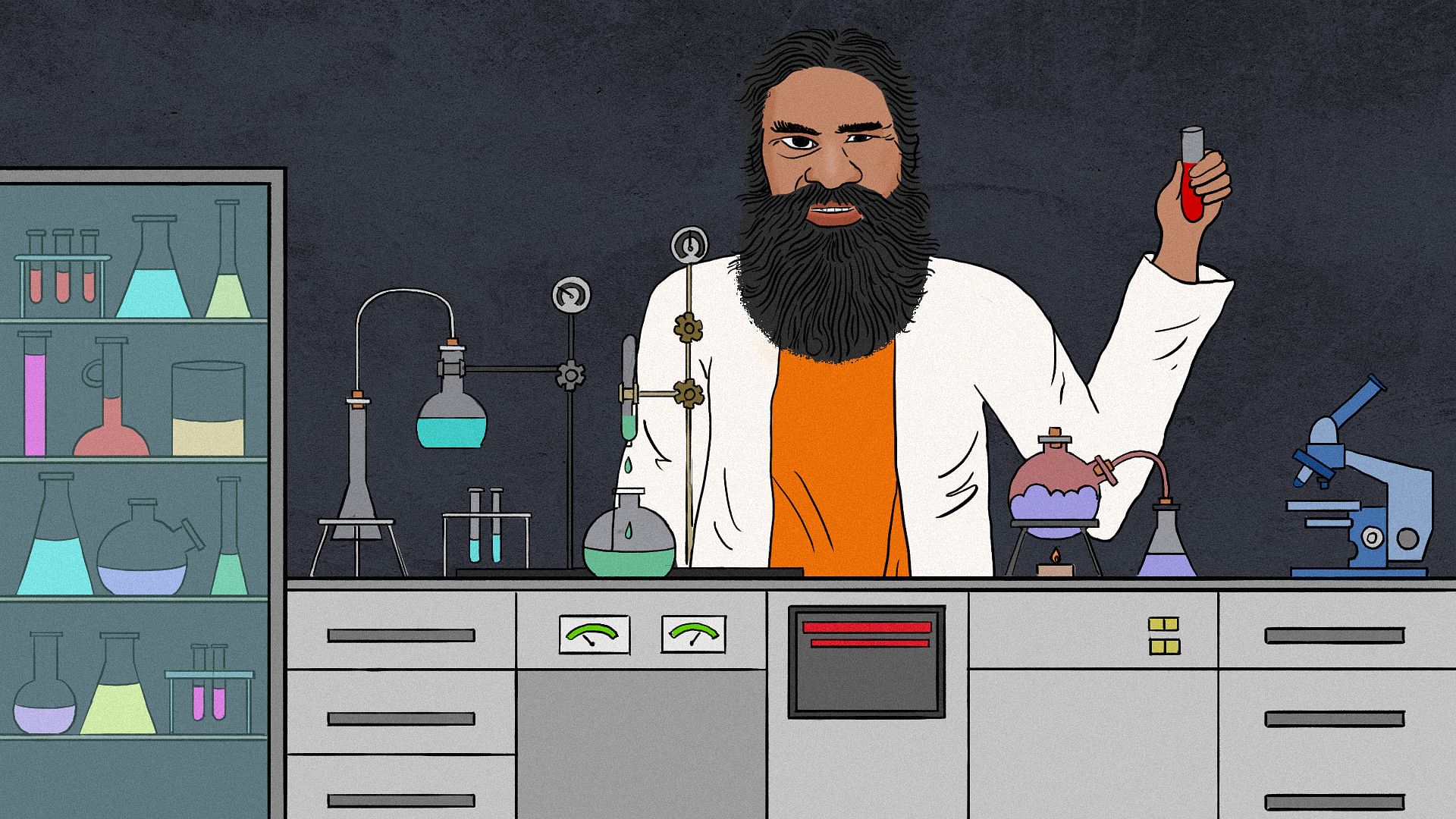 Want to market the next Coronil? Here’s a guide to selling untested ayurvedic drugs Of course, Balkrishna’s presence as a co-author is automatic grounds for disqualifying some of the papers due to conflict of interest, since many of the “studies” attempt to prove the efficacy and validity of medicines sold by Patanjali. But these papers continue to be published and cited as “research and evidence” by Patanjali.

Ramdev as a megaphone

Even though ayurveda is warmly supported and promoted by the Modi government and the Ayush ministry, its practitioners continue to feel injured about their “exclusion” from mainstream medicine in India.

“I have no real grievance against modern medicine,” said Pawasker. “But doctors could be more inclusive. There is a general notion that ayurvedic knowledge is useless. I think that opinion is childish. In today’s war-like situation, a whole medical community has ended up being excluded from the fight.”

Despite the general belief that Ramdev is not qualified to be an expert on ayurveda, many practitioners maintain that ayurveda is a “useful science” and cited their “personal experience” for their belief that ayurveda can be deployed in the fight against Covid. Many felt conflicted between Ramdev’s image and the attention he is bringing to ayurveda.

Patil said, “People might feel that ayurveda is equal to Ramdev, which is not good. But at least his political and financial clout means that he gets heard. To this end, I think even though he is using the opportunity to market Patanjali, at least people are paying some attention to ayurveda.”

Of course, despite these complaints, it needs to be remembered that India has an Ayush ministry, a health minister who encourages the use of ayurvedic interventions, and hundreds of colleges offering ayurveda courses.

Yet, practitioners like Prasan Sankar, who works at Bengaluru’s Institute of Ayurveda and Integrative Medicine, feel that India has “fallen behind the world” when it comes to ayurveda.

“China, Japan and Israel are seriously studying and implementing integrative approaches in healthcare,” he said. “We have a wealth of information, a living tradition of ayurveda being practised successfully for centuries...What are we waiting for?”

At the end of the day, however, ayurvedic options to tackle Covid include things like “boosting immunity” – which is not something that can help fight a pandemic, especially with no evidence to back up these claims. The science lies on the side of vaccines.

When asked if they prescribe Patanjali’s medicines, all the ayurvedic practitioners we spoke to, bar one, said no. “I used to buy their medicines because they are cheap,” said vaidya Anand Pandey in Varanasi. “But I found that they did not work. So, I stopped purchasing them.”