The photojournalist was laid to rest at a cemetery in Jamia Millia Islamia, his alma mater, on Sunday.

ByAyush Tiwari19 Jul, 2021
Attendees gather around as Siddiqui is laid to rest at the cemetery.

Half an hour before Delhi was swept by monsoon rains on Sunday night, photojournalist Danish Siddiqui was buried at a cemetery in Jamia Millia Islamia.

Siddiqui, 38, was killed while covering clashes between the Afghan Special Forces and the Taliban in Afghanistan’s Kandahar province on July 16.

The funeral was attended by hundreds – former classmates, budding photojournalists, friends and neighbours – who brought along their private memories of Siddiqui, widely remembered as a local boy who won the Pulitzer Prize.

The late photojournalist’s body, resting on a bed of cotton in a wooden hearse with an Air India sticker, arrived in Delhi earlier in the evening. At 9 pm, it was shifted to the Jamia campus, where prayers were offered in an open court lit by floodlights.

As soon as the prayers concluded, attendees thronged the hearse. Some wanted to touch it one last time; others offered hands and shoulders as it was moved into a hearse van headed for the cemetery 100 metres away.

Mediapersons milled among the mourners with their mics and cameras, while others captured the funeral on their phones. Some ran it live on their Facebook accounts and a few passed on updates to their kin over video calls.

Attendees and mediapersons at the Jamia campus after the funeral prayers.

An attendee broadcasts the funeral procession live on Facebook.

Hundreds of attendees, mostly locals from Jamia Nagar, followed the hearse van to the cemetery. There, under a neem tree, Siddiqui was laid to rest at 10.15 pm. The grave was covered with a yellow sheet, held by soil on the edges. A floral wreath was kept on it as dozens bowed their heads and murmured prayers.

One of the attendees was Abdullah, 37, a former classmate of Siddiqui. In 2001-02, the two studied together in Classes 11 and 12 at ​​Jamia Millia Islamia Senior Secondary School. “He was an economics honours student who had shifted from a different school,” Abdullah recalled. “A very simple boy who loved silly pranks. No one had an inkling that he would step into such a daring profession and make a name for himself.”

Abdullah remembers a Danish who was in the good books of his teachers and had a lot of friends. “I think he set a big goal for himself after switching to a mass communication programme after school,” he told Newslaundry. “His death is a huge loss. There seems to be a hollowness inside which only time will fill.”

Riyaz, 29, a PhD student at the Indian Institute of Technology in Delhi, had never met or known Siddiqui. But the loss felt personal. “I had posted a picture of a mob assaulting a Muslim man during the Delhi carnage on my Facebook,” he said. “It went viral. I learnt only later that Danish clicked it and that’s how I came across his work – the way he would blend multiple perspectives in a photo while staying true to his subject.”

Riyaz, who lives in Jamia Nagar but hails from Kerala, would often come to the cemetery for a stroll. “It’s the first time I’m here for a funeral, and that too Danish’s,” he said. “Even in my seven years in Delhi, I have never seen a funeral this big. And almost all attendees are clicking pictures. Everyone has become a photographer today.”

Budding photojournalists Murtaza and Mohsin, both 21, had met Siddiqui separately over the last year. Murtaza chanced upon him at the farmer protest at Singhu border and Mohsin got a pep talk at the rehearsal parade before Republic Day in January.

“He told me that riots are more dangerous to cover than wars,” recalled Mohsin. “Because in wars, mediapersons enjoy better protection.”

He continued, “Once at a protest outside UP Bhavan, I saw him go to his car and return with protective gear on. He thought that the situation could get violent. Later he told me that no matter how big or small a protest, safety gear is a must. That’s a rule most Indian photojournalists do not follow.”

Murtaza, on the other hand, thinks that Siddiqui’s work reflected not just a great photojournalist, but also a good human being. “He did not treat me like a beginner when I had met him,” he said. “He was very warm and gave us helpful tips. Like how we should always start with local stories.”

Riyaz and his friend at the funeral in Jamia Millia Islamia.

Photojournalist Mohammad Meherbaan, 22, was mentored by Siddqui himself. “I was a zero before I met him,” Meherbaan told Newslaundry. “But today, my pictures have been published in publications all over the world. I owe it all to Danish.”

Last week, soon after Siddqui’s death, one of Meherbaan’s relatives also passed away. “I was consumed by my mentor’s loss. I did not go to my relative’s funeral because I did not feel the kind of attachment I felt to Danish.”

The young photojournalist, who would insist on carrying Siddiqui’s camera whenever they met, remembers him as a man who would simply chuckle when near and dear ones raised alarms about the dangerous nature of his work. “Even when he was in Afghanistan, I would watch the videos he posted and call him to ask him to take care. He would laugh it off and instead ask whether it rained in Delhi. That was his style. There was no one like him.” 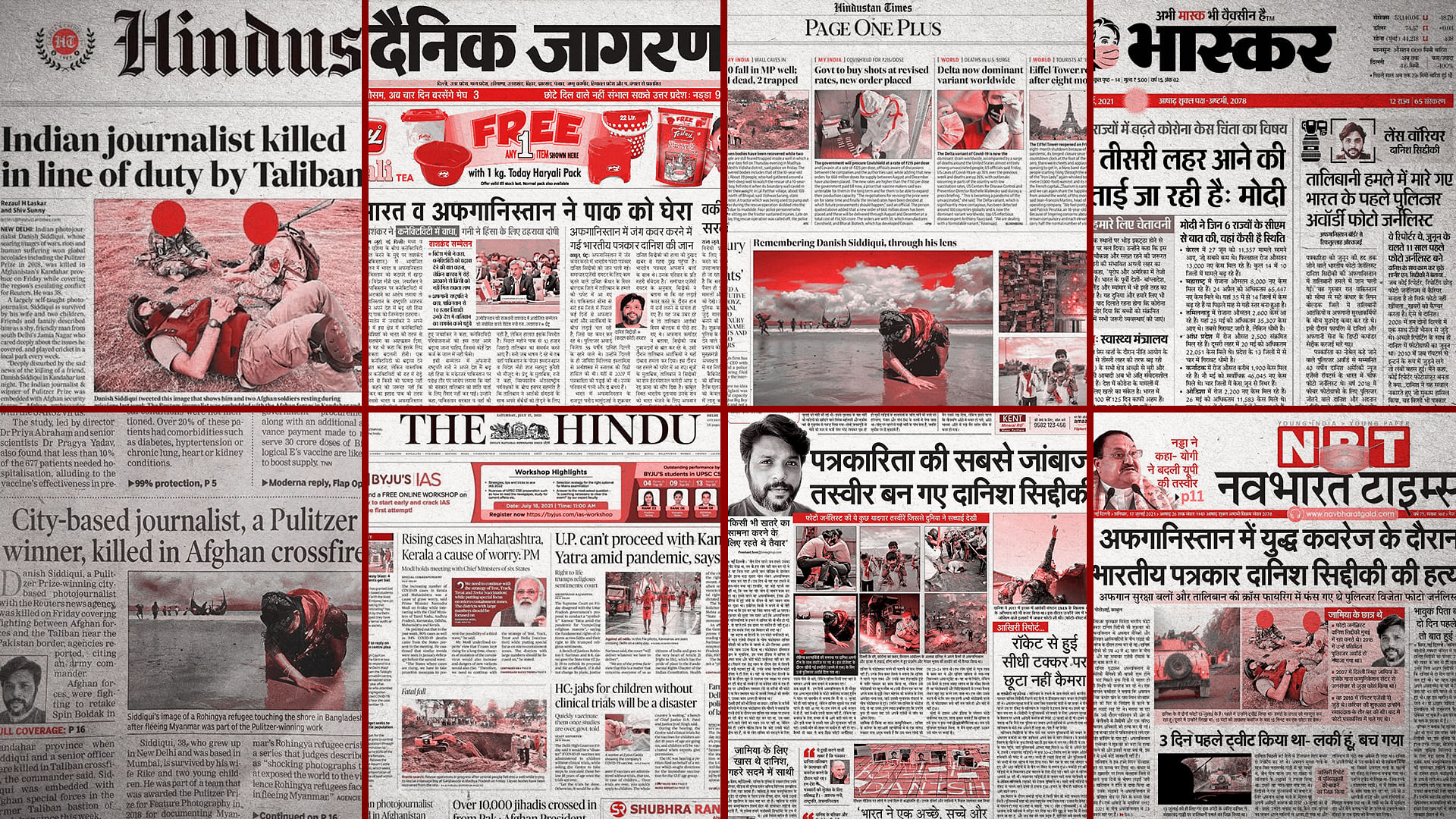