From denial to claims it ‘maligns’ India, the government’s response to Pegasus is predictable

But the global scale of revelations means the government cannot sweep it under the carpet. Though it’s trying its best.

The government wishes it would just disappear. It will probably try, as it has done in the past, to come up with a diversionary tactic. But Pegasus is here to stay. The unraveling story of the spyware sold by an Israeli company to "vetted governments" that could have infected as many as 50,000 mobile phones in several countries around the world cannot be pushed under the carpet. It is simply too big, and too important.

With daily exposures, some more sensational than others, how has the Indian media responded to this story? The independent digital platform the Wire was one of 17 international media partners, including Washington Post and the Guardian, in 10 countries that collaborated to bring together the Pegasus Project. It was based on material sourced by the Paris-based non-profit journalism organisation Forbidden Stories and assisted by Amnesty International's Security Lab. The vast trove of telephone numbers were suspected to belong to persons of interest to their respective governments, although proof that all these phones were hacked has not yet been established.

The story broke in India on the night before the Parliament reconvened on July 19 for the monsoon session. Typically, on day one, the Indian media's response was lukewarm. While Indian Express, for instance, gave it front page lead, given that amongst the 40 Indian journalists whose numbers were listed as possible targets of surveillance were three from the paper, the Hindu was more cautious, running it on an inside page without mentioning that one of its own correspondents had also figured on this list.

It was when the next tranche of names was released, which included Rahul Gandhi, former election commissioner Ashok Lavasa, and current IT and Railways minister Ashwini Vaishnaw amongst others, that the media woke up and took note.

Since then, the major national dailies have featured the daily revelations prominently. They also cannot ignore the story, as the Opposition has been vociferous in the Parliament demanding an independent inquiry or a joint parliamentary committee. However, Shashi Tharoor, the MP who heads the parliamentary standing committee on information technology, has said that they will take it up and that at the moment a JPC was not needed.

Several newspapers in editorials have also made demands for an independent inquiry. Amongst them is the Indian Express, which asked for an investigation and held that "trying to snoop unlawfully is what maligns Indian democracy". But then, it also asked for "the department of dirty tricks" to "come clean". That's a contradiction in terms as a "dirty tricks" department is precisely that, because it is not "clean".

The Hindu too emphasised the need for an inquiry and deplored the fact that "state agencies can trample upon the lives of citizens in such a manner while elected representatives plead ignorance is unsettling for a democracy. This is antithetical to the basic creed of democracy." And it asked the question that the government has still not answered: "Has any Indian agency bought Pegasus?"

What we have to constantly remind ourselves is that apart from the prominent individuals that featured in the list of 300 names from India whose mobile phones could have been compromised, phones belonging to the woman who accused the former Chief Justice of India Ranjan Gogoi of sexual harassment, and her relatives, were also on the list. If it is confirmed that a spyware designed to help governments deal with terrorism and crime has been used against ordinary citizens, then every citizen has reason to be concerned, not just journalists or politicians.

Also, amongst the 40 journalists whose phones were identified, although not all have been checked to ascertain whether the spyware was planted, are people like Rupesh Kumar Singh from Jharkhand, a journalist who spent six months in jail for exposing the attacks by state actors against adivasis. It would appear that you don't have to be a Delhi-based journalist working for a prominent media organisation to be targeted. If you simply do your job of exposing the wrongs in our society through your journalism, you are a potential target for surveillance.

The government's response to the Pegasus story has been predictable: outright denial, obfuscation and the usual trope of this being a "bid to malign India". It also continues with the well-worn strategy; attack is the best form of defence. So instead of answering a direct question about whether it has used the spyware, the government skirts around it and instead attacks those who ask the question. And, not surprisingly, pro-government television channels have followed the same line.

So, did this government buy the Pegasus software and for how long has it been in use? According to this story by Gaurav Vivek Bhatnagar in the Wire, WhatsApp had alerted the government in 2019 of attempts by Pegasus to break its encryption in as many as 121 accounts and that it had succeeded in hacking 20 accounts. Furthermore, in response to an RTI filed by Venkatesh Nayak of the Commonwealth Human Rights Initiative, the ministry of communication, electronics and information technology had acknowledged that WhatsApp had informed them about this attempt to break their encryption. Yet, in the Parliament, the newly appointed IT minister Ashwani Vaishnaw stated that there was no "factual basis" to reports about WhatsApp and the use of Pegasus.

As this column is being written, there are more revelations emerging. And apart from the Opposition, at least some in the media are asking the questions that need to be asked. They are demanding that the government explain whether and when it has bought Pegasus from NSO, the Israeli company, how much it paid for it, to what use has it been put, and what are the systems set up to govern how it will be used. The answers to these questions are crucial, irrespective of whether there can ever be conclusive proof that it was the Indian government that was behind the targeting of individuals with this spyware.

It is also important to remember that although most governments conduct surveillance at various levels, this particular spyware is deadly because it mines all the information people have on their phones, not just their voice calls or location. And it can do this in such a way that the uninitiated would never be able to detect its presence. Given that ordinary citizens are also on the list of potential targets, this is something that would concern more than just journalists, or people in public life.

Several Indian newspapers have done well to explain the process of how the spyware works with graphics. Readers also need to know the background of NSO, and how Pegasus has been used elsewhere. The Guardian provides useful background in its "Today in Focus" podcasts where it is focusing currently on the Pegasus Project.

The bottom line, as far as the media is concerned, is that this government really does not need sophisticated spyware to bully it to fall in line. The largest circulating Hindi newspaper, Dainik Bhaskar, has been consistently calling out the government's lies on the pandemic, especially the underestimates in the death count as well as the shortage of oxygen during the second wave. It has also prominently displayed the Pegasus story on its front page. As if on cue, on July 22, income tax raids were conducted on its offices in Bhopal and elsewhere.

This government's attitude towards individual journalists, or media houses, that attempt to do their jobs as guardians of free speech and expression, is an open secret. Hence, the fact that neither the prime minister nor anyone else from the government had the grace to issue a statement about the killing of the talented, award-winning Indian photojournalist from the Reuters news agency, Danish Siddiqui, in Afghanistan earlier this month comes as no surprise.

Danish's brilliant and evocative photographs will live on, calling out every lie uttered by this government, especially about the impact of the second wave of the pandemic, the mismanagement, the toll on ordinary people, and the deaths. These images cannot be erased. That is the power of an image, truly greater than thousands of words. And this is the uncomfortable truth that the Modi government simply cannot digest. 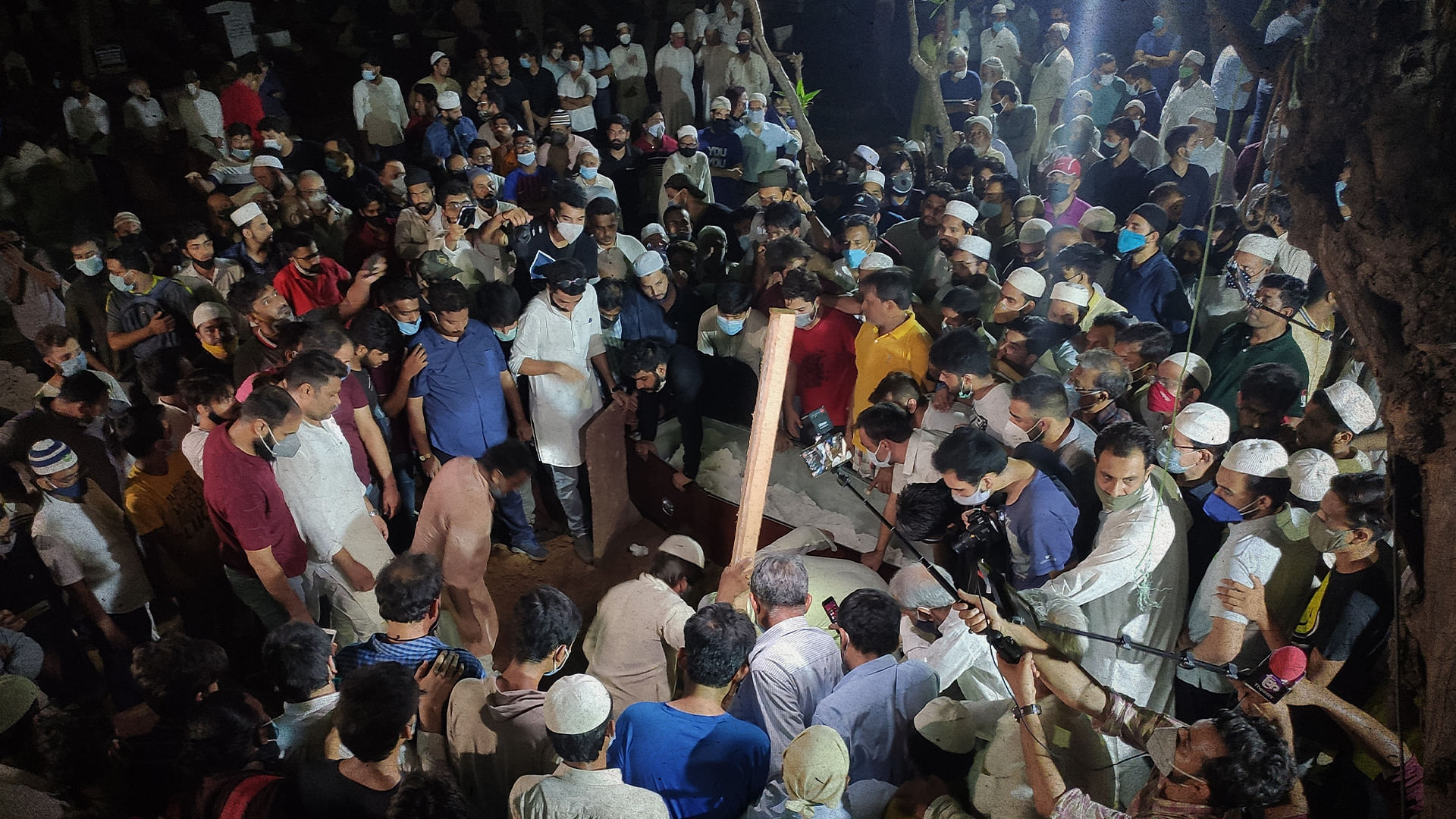 Amit Shah says ‘facts’ of Pegasus snooping are there for ‘entire nation to see’. What did we miss?