Later in the day, Gangle, a journalist who runs his own YouTube channel, Nation Today, went to the office of the Khargone District Mining Officer Sawan Singh Chouhan to follow up on his story with recorded footage of the stored sand.

The godown in question belongs to a Khargone-based company called Anant Constructions. It is owned by Dinesh Yadav who happens to be BJP Yuva Morcha President.

“We wanted a response from the official concerned and were told to come after lunch. When we reached Chouhan’s office, he told us to wait,” Gangle told Newslaundry. Gangle is also Khargone correspondent for the Hindi daily, Dainik Sach Express.

Meanwhile, Gangle was joined by other reporters, each waiting for a sound bite. When these six journalists kept reminding Chouhan of the potential law and order situation, he got visibly miffed.

In a video shot by Gangle, the reporters can be seen asking Chouhan how long they will have to wait. “It is 5 pm now and I have to wrap up some personal work,” Chouhan says as he turns away. Then he warned the reporters not to "interfere in his work as a public servant".

The journalists returned without an official bite but received a surprise the next day. All six of the reporters present outside Chouhan’s office were named in an FIR filed at the Khargone police station.

In the complaint filed by Chouhan, he alleged that the reporters “hurled caste specific slurs at him.” He belongs to the Scheduled Tribe community. The journalists were booked under sections 147 (punishment for rioting), 294 (punishment for obscene acts or words in public), 353 (obstruction in performance of duty by government officer) and 506 (punishment for criminal intimidation) of the Indian Penal Code along with section 3(2)(v)(a) of the SC/ST Prevention of Atrocities Act. Interestingly, Dinesh Yadav, BJP Yuva Morcha president and Amit Bhavsare, another BJP worker, both of whom are land mining contractors were listed as eyewitnesses in the FIR.

Fearing imminent arrest, Gangle and others approached local senior journalists for help. Days later, Sunil Sharma, president of the Khargone District Journalists’ Association, wrote a letter to the chief minister Shivraj Singh Chouhan. “I would like to remind you of certain points in order to ensure that the probe in this case is transparent. As per a letter issued by the state home department in 2010, in cases related to a journalist, the police have to make sure that it does not intend to harass the journalist in any manner,” Sharma wrote in his letter.

Sharma also requested that the CCTV footage from Chouhan’s office be scrutinised to verify the latter's allegations. A copy of the letter was sent to MP’s home minister Narottam Mishra, Bhopal Police Commissioner, and District Magistrate of Khargone.

Two months later, when Newslaundry asked Sharma for the latest update in the case, he said, “Thande baste me daal diya (matter has been put in cold storage).”

Speaking to Newslaundry, Sawan Singh Chouhan maintained that “the journalists misbehaved that day even as he requested them to give time to respond.” Chouhan also stood by his allegation that the journalists had used “abuses” and “caste-based slurs” when he told them that some work from the Bhopal office needed immediate attention.

Meanwhile, BJP Yuva Morcha President, Dinesh Yadav told Newslaundry, “The contract for sand mining in Khargone has been given to a company called RK Gupta constructions and we are only supervising their work in the capacity of caretaker.”

In May 2017, the Shivraj Singh Chouhan’s government had imposed a blanket ban on sand mining in Narmada river and mechanised sand mining at other rivers. However, in October 2017, the BJP-led government reversed its own decision allowing individuals to extract sand by paying a fixed royalty to the local panchayat. Yet there are restrictions in place to ensure that extensive sand mining in the rainy season doesn’t lead to landslides.

The National Green Tribunal (NGT) had issued an order on June 30, 2021, restricting any mining activity till October end. But reporters in Khargone had been hearing about instances of illegal mining even after the enforcement of NGT’s order. Khargone is among fifteen districts along Narmada where illegal sand mining continues.

The incident in July was not an isolated instance when journalists were intimidated for reporting on a story on sand mining.

In July 2019, Sunil Patel, a reporter with OK India news channel, had done a story on illegal sand mining in Khargone’s Raverkhedi village. “My cameraperson had called the police helpline number 100 so that they can take cognizance of the matter. But instead of taking action, my colleague was made an accused in the case,” Patel told Newslaundry.

He alleged that when they went to the police station to file a complaint in connection with the case, Patel’s press ID card was snatched and he was put behind bars. “Usually even the officials are in cahoots with the mining mafia, hence local reporters are often at the receiving end,” said Patel.

A few journalists who dared to report on illegal sand mining in the area had to pay a heavy cost for it. In 2015, Sandeep Kothari, a reporter based in Katangi tehsil of Balaghat district, was abducted. His burnt body was recovered later from Maharashtra’s Wardha district. Kothari had been filing stories on illegal sand mining for Hindi dailies Nai Duniya and Nav Bharat.

Police suspected that Kothari was targeted by the mining mafia after he refused to take back a case filed against them.

“He was often asked to settle the matter,” said Naveen Kothari, Sandeep Kothari’s younger brother. All three accused in the case were released on bail in 2017 even as the case continues to be heard at the sessions court.

Sandeep had started his journalistic career in 2007. “He used to be a thekedar (building contractor) but got disillusioned after seeing havoc wreaked by the Naxals in Balaghat,” said Naveen.

There were cases of rape and molestation filed against Sandeep leading to arrest in 2013. “Those were motivated cases with an intention to intimidate my brother,” said Naveen. Sandeep was out on bail in 2015 and had started following up stories again when he was kidnapped.

In 2018, Sandeep Sharma, an investigative journalist based in Bhind, was crushed to death by a truck. Days before his death, Sharma had written a letter to the superintendent of police asking for protection. Three years later, his wife Sunita Sharma is still waiting for justice. No arrests were made in the case.

“I tried to follow up the matter but the police were not sure about the culprits. Then my relatives suggested to pursue it as a case of accident instead of murder,” Sunita told Newslaundry. So she approached a lawyer in 2019 who filed a plea on her behalf at the Gwalior court seeking compensation for the road accident. “I don’t understand the legalities and have a house to run. We are mostly dependent on the pension of my father-in-law,” says Sunita, explaining why they couldn’t follow the case in Bhind.

The case of Harish Pathak

Just how lawless and rampant the problem of illegal mining is in the area can perhaps be understood through the case of a disillusioned BJP worker.

Pathak’s grandfather was associated with the Bhartiya Jan Sangh, a political outfit of the RSS in the 1950s. Pathak, too, used to visit the shakha as a child and worked as a Swayam Sewak. On the professional front, Pathak has worked with Indore Samachar newspaper and Azad Hindustan YouTube channel.

In the last week of March 2021, Pathak along with locals and reporters, intercepted two persons allegedly involved in illegal sand mining. “Illegal sand mining is quite rampant across villages in this area. That day, I first went to the nearest chowki, requesting the police to arrest people we had intercepted and then we informed the office of the Superintendent of Police as well,” Pathak told Newslaundry. He even tried calling Gajendra Patel, Member of Parliament from Khargone.

But the police didn’t file an FIR. Days later, around 100 locals gathered at Segaon bus stand and burnt an effigy of the local MP.
This prompted a police case against Pathak himself and three others. The police charged them under section 188 (punishment for disobedience to an order duly promulgated by a public servant) of the Indian Penal Code and section 51(a) of the Disaster Management Act 2005 for trying to obstruct a government official from discharging his duty. An istgasa (or complaint) was filed by district administration before a magistrate’s court stating that Section 144 had been flouted and that Pathak along with his accomplices should deposit a fine of Rs 5,000 in lieu of release.

Locals burning effigy of the MP in Segaon.

“If I talk about my district, every village witnesses illegal mining on a daily basis. Issuing threats from those involved in mining is very common here,” said Pathak.

In April, Pathak announced his resignation from the post of BJP Mandal Adhyaksh on Facebook. “A BJP worker was involved in an argument with local villagers when they tried to stop a machine from digging near the banks of river Narmada. When members of the ruling party are only involved in such acts, I didn’t want to be associated with them anymore,” said Pathak, adding that “the three black farm laws brought in by this government at the Centre” was another reason behind his resignation.

In May, Pathak filed two complaints on the CM’s helpline number, requesting the home department to take action against errant officials. There was no response. In August, he filed another complaint with the portal and is still awaiting a response.

(With inputs from Ashu Khan in Bhopal) 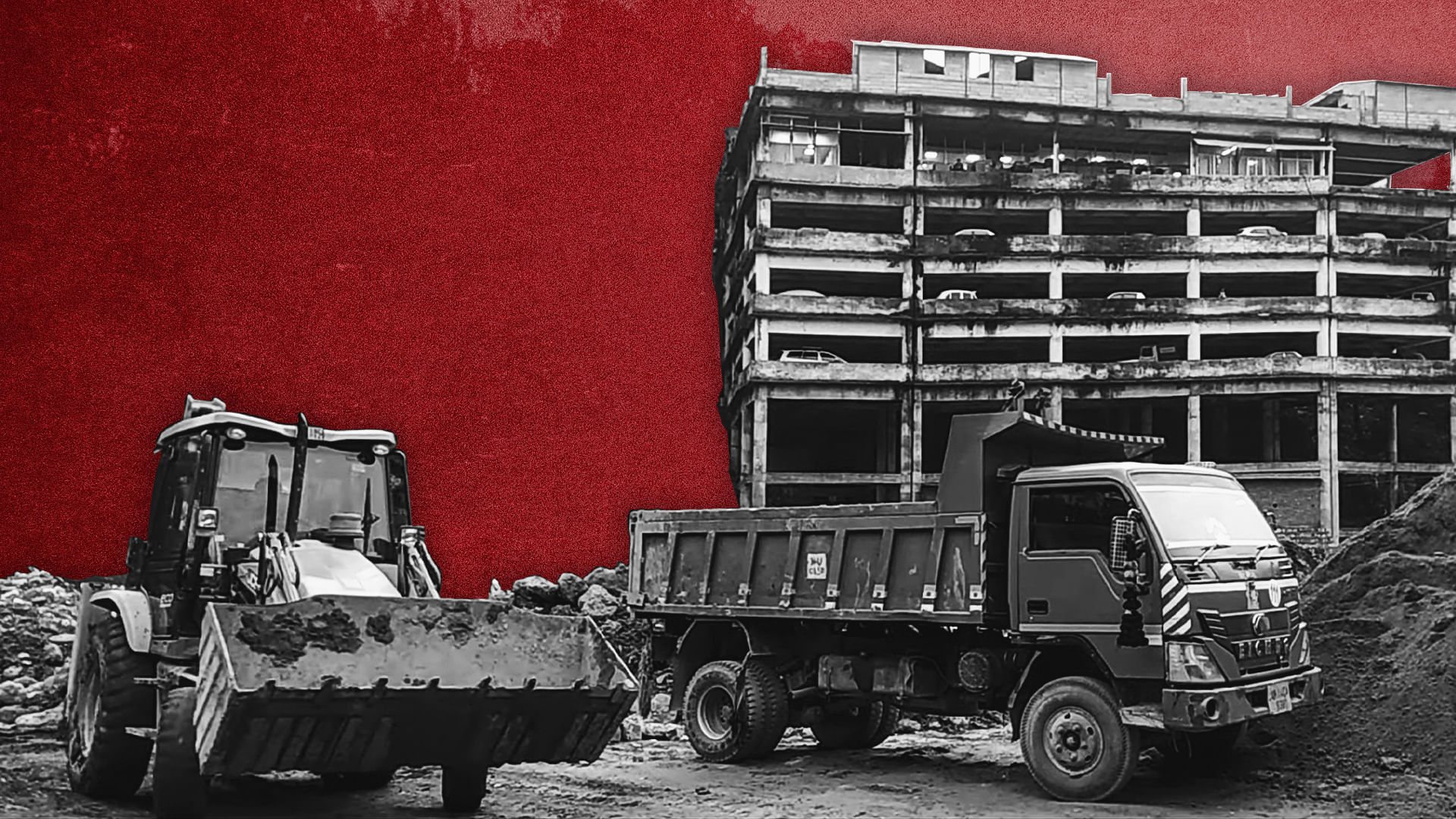