UP Police thinks so, but the only evidence are statements that may not be admissible in court. Also, if Kappan was on a secret PFI mission, why did he inform his editor of his trip to Hathras?

This is the fifth part of Newslaundry’s ongoing series on the case against journalist Siddique Kappan. You can read the previous parts here.

Based on an examination of the 5,000-page chargesheet by defence lawyer Madhuvan Dutt Chaturvedi, Newslaundry has learnt that UP Police’s special task force (STF) has claimed Kappan was sent to Hathras by the Popular Front of India, an organisation that UP Police had recommended be banned in 2020. In addition to WhatsApp chats that it considers proof of Kappan’s association with PFI, UP STF has included confessional statements by two PFI members who were arrested in February this year. Both statements were recorded under Section 161 of the Code of Criminal Procedure (CrPC) and have little evidentiary value since confessions recorded by a police officer are not admissible under the Indian Evidence Act.

PFI has denied the UP STF’s claims and alleged its two members have been illegally detained and tortured by UP Police.

Kappan has denied any association with PFI and has maintained he was going to Hathras to cover the aftermath of the brutal gangrape and murder of a Dalit girl.

According to a first information report (FIR) filed at Lucknow’s Gomti Nagar police station on February 16, 2021, PFI members and Kerala natives Ansad Badruddin and Firoze Khan were arrested by UP Police’s anti terrorist squad (ATS) on suspicion of plotting a bomb blast. However, according to PFI’s general secretary Anis Ahmed, the two PFI members were not in Lucknow. They were on a train, travelling to Mumbai after having visited West Bengal and Bihar for expansion work of the organization.

The ATS claimed that on February 11, it had received information from its network of informants that some “Hindutva organisations” would be the target of attacks on Basant Panchami, masterminded by PFI. “Since the last few days the STF has been getting inputs about a criminal conspiracy by PFI members that aims to disrupt the unity and integrity of the country. And with an aim to wage war against the government, they are trying to amass weapons and explosives to target some sensitive places in Uttar Pradesh, including persons who are heading certain Hindutva organizations”, reads the FIR.

The FIR does not specify which organisations were being targeted, but on the basis of the information received, Badruddin and Khan were reportedly arrested from Kukrail, a picnic spot in Lucknow. The two were identified by a police informer, according to the FIR. Nine explosive rods and an electronic detonator were allegedly found in Badruddin’s backpack while seven explosive rods and a bundle of red wire were allegedly recovered from Khan.

Defence lawyer Madhuvan Dutt Chaturvedi, who is representing Ansad Badruddin and Firoze Khan, told Newslaundry, “There is a recovery memo at the time of arrest regarding explosives that finds mention in the chargesheet. But the UP STF never took them to Kukrail picnic spot. Actually Ansad and Firoze were illegally arrested on February, 11, 2021 on a running train while they were travelling from Katihar to Mumbai.” Chaturvedi also alleged Ansad and Firoze were subjected to “inhuman torture” and coerced into signing the recovery memo.

Under section 161 of the CrPC, a police officer “may reduce into writing any statement made to him in the course of an examination”. However, such confessions have little evidentiary value. Section 24 of the Indian Evidence Act says if a confession appears to the court to have been “caused by inducement, threat or promise”, it will be considered “irrelevant”. Despite this, UP STF has included confessional statements by Badruddin and Khan in its chargesheet against Kappan.

Badruddin’s statement, recorded on March 10, 2021, says he has been a member of PFI since 2010 and that he is a part of the organisation’s “hit squad”, which is supposedly made up of “men who are physically fit and know how to use weapons”. Ansad and Badruddin’s lawyer Madhuvan Dutt Chaturvedi has denied the allegation that his clients are members of a “hit squad”.

According to Badruddin’s confession to UP STF, this hit squad is tasked with carrying out acts of arson during riots, but UP STF’s chargesheet does not provide concrete examples of any past activity. Badruddin has been quoted to have said, “Secret meetings were being organized in the name of the expansion of the hit squad.” One such secret workshop was allegedly organised by PFI member Kamal KP, in Malappuram in Kerala, in the first week of September 2020.

A ‘secret’ PFI workshop has been central to UP STF’s charges against Kappan. As reported by Newslaundry, Kappan allegedly sent a voice note to Kamal on September 1, 2020, which has been flagged as suspicious by the investigating agency. In it, Kappan asks Kamal about a workshop and tells him to delete the message afterwards. However, according to one of the transcripts of Kappan’s interrogation included in the chargesheet, Kappan has denied any knowledge of such workshops. He has also said he didn’t ask for any of his messages to Kamal to be deleted.

Q: How many meetings or workshops did you participate in which were organized by Kamal KP? Where were they conducted?

A: I can’t recall. I didn’t have any conversation with Kamal KP regarding such a workshop or meeting. I never said to delete. I can tell something only after hearing the voice recording.

Badruddin and Khan’s confessional statements are the only evidence that UP STF has found of PFI’s workshops. According to them, at a workshop held in September, there was discussion of how protests related to the Citizenship (Amendment) Act and Babri Masjid had lost momentum. It was decided that a new issue was required to continue PFI’s anti-government campaign. In his confession, Badruddin is quoted as saying, “Siddique Kappan who is an honourable member of the organization was instructed to search for such an opportunity and prepare the atmosphere accordingly.”

Days after this workshop, the gangrape in Hathras made news and according to Badruddin’s statement, Kamal instructed Kappan, who was in Delhi, to go to Hathras. “We were also told to be ready to go to Hathras and prepare ourselves with explosives”, Badruddin has said in his statement, referring to Khan and himself. However, before they could reach Hathras, Kappan was arrested.

Khan’s statement, also recorded on March 10, 2021, makes similar claims. He confirms he has been a member of PFI for six to seven years and is quoted as saying, “Siddique Kappan was entrusted with a special role and there was a discussion regarding money to be given to him at the workshop in September.”

PFI’s general secretary Anis Ahmed has said no such workshop was conducted by the organisation in September 2020. “When there was no such workshop, there is no question of Siddique Kappan attending any PFI workshop,” Ahmed told Newslaundry. He said the “hit squad” is “a creation of the UP ATS” and also said Kappan was not a member of PFI. Ahmed further alleged UP ATS had come up with the story of Badruddin and Khan’s involvement in a terror plot after their families held a press conference in Kerala and filed missing persons’ complaints.

On assignment for Azhimukham or PFI?

In terms of timing, the arrest of Badruddin and Khan came 10 days after Ashok KN, editor of the Malayalam news portal Azhimukham, was questioned about Kappan by UP STF. Azhimukham is owned by journalists Priya Solomon and Josy Joseph. Siddique Kappan, a freelance journalist, used to send stories to Azhimukham as a contributor. His monthly salary was Rs 25,000. On February 6, 2021, Ashok contacted by UP STF. He was informed that the “accused Siddique Kappan had posted inflammatory posts on azhimukham.com website” and consequently, Ashok was required to cooperate with UP Police’s investigation.

In March 2021, Ashok sent a reply by email to UP STF, in which he said, “Mr Siddique informed our office at 12:10am on October 5, 2020 through a WhatsApp message that he was going to Hathras early in the morning. It is normal for our staff and contributors to decide on their own and inform us about field trips. In fact, it is a global norm for reporters.” The chargesheet does not mention that Kappan had already written one article on the Hathras incident for Azimukham. Since he was in Delhi and within driving distance of Hathras, it wouldn’t be unusual for Kappan to follow up on the developing story.

A more detailed statement was recorded on April 2, 2021, at UP STF’s Noida office. Ashok said he was based in Kochi between July 2020 to November 2020 while working as editor of Azhimukham. The statement says Kappan informed Azhimukham’s executive editor, by WhatsApp message, that he would go to Hathras. “He didn’t specify who all were accompanying him. Since he was a freelancer, we didn’t have any control over him,” Ashok has been quoted as saying in his statement to UP Police. Ashok denied any knowledge of Kappan’s alleged links with PFI in the statement and told UP STF, “I can’t say whether his pieces were communal or not but yes they were pro-Muslim.”

UP STF does not offer any explanation for why Kappan informed his editor at Azimukham of his trip to Hathras if he was going there to carry out a secret, terror plot for PFI.

Kappan’s lawyer, Wills Mathews, told Newslaundry, “A journalist can go anywhere and move with any person of his/her choice for gathering news, unless it is proved that he has a conscious and definite role in some illegal activity or a beneficiary of some illegal actions which will come under the ambit and scope of offences alleged against Mr Kappan.”

Commenting on UP STF’s findings in the chargesheet, former Bombay High Court judge and chairperson of MURL (Movement Against UAPA And Other Repressive Laws) BG Kolse Patil said the submitted evidence needs to be corroborated. In the absence of corroboration, any contradiction is likely to work in favour of the accused. , “In cases related to draconian laws such as UAPA, sedition, etc. whenever an approver makes a statement, such evidence needs to be relied upon with caution. It will have to be corroborated,” said Justice Patil. 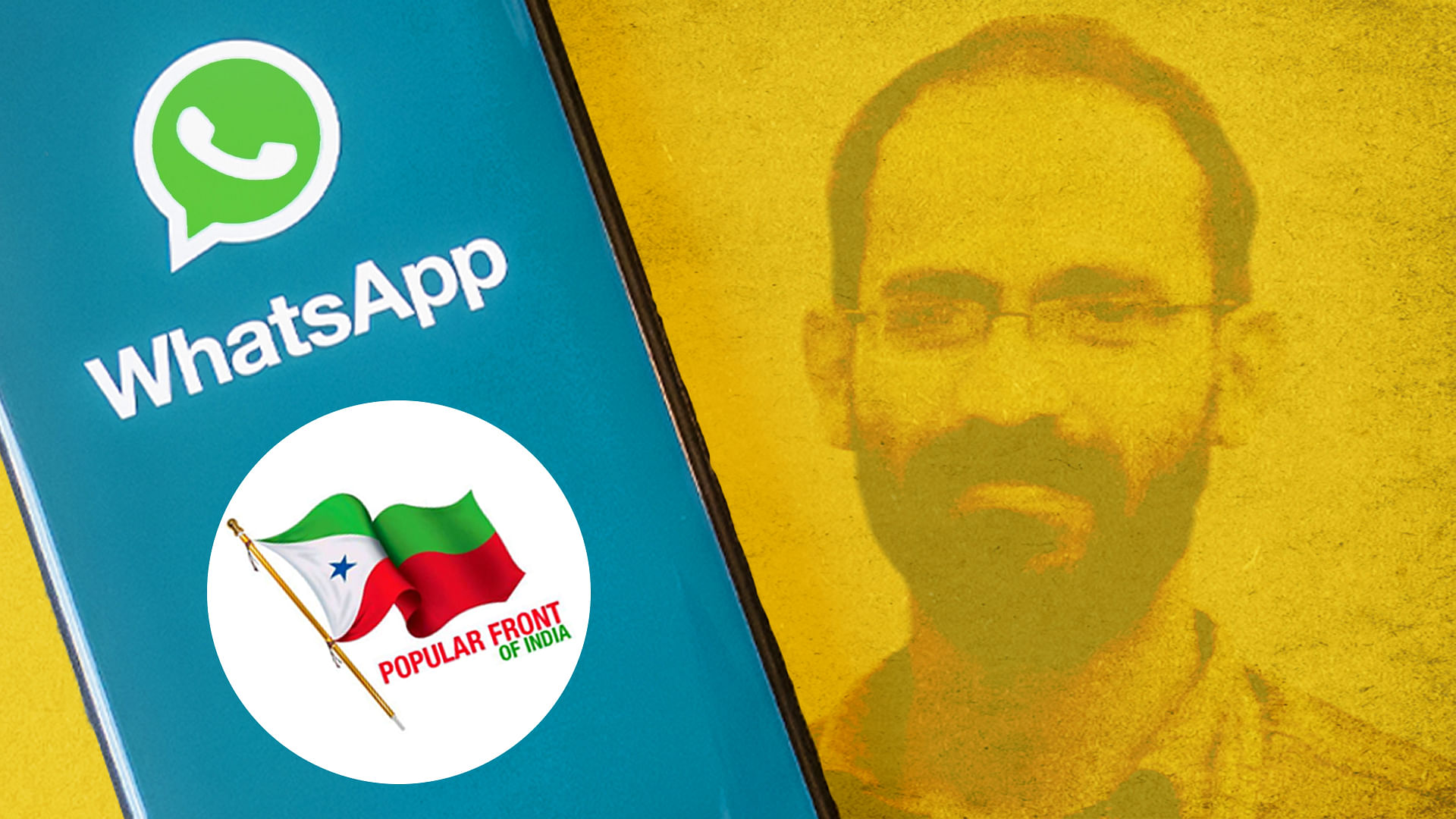