A mob of nearly 500 people had vandalised a school run by Sagar Diocese last week.

In the sleepy town of Ganj Basoda in MP’s Vidisha district, class 12 students of St Joseph School sat in neat rows, writing their mathematics exam on the afternoon of December 6, when a mob of around 500 people﹘allegedly affiliated to the Bajrang Dal and Vishwa Hindu Parishad﹘attacked and vandalised the institute, leaving students and teachers traumatised.

It all began with a misreading of the words ‘holy communion’ and a false alarm: about the conversion of eight Hindu children to Christianity at St Joseph Parish and evangelical activities through foreign funding at other institutes part of the Sagar Diocese. This was alleged in a complaint to the National Commission for the Protection of Child Rights by an organisation led by a former RSS pracharak on November 15.

The NCPCR chairman then wrote to the Vidisha Collector on November 24 seeking a probe against the Sagar Diocese that oversees the St Joseph Parish, school and other institutes for conversion-related activities. He sought a report within seven days and referred to the complaint received on October 31.

Using the complaint to the NCPCR and the subsequent letter to the district collector, a local YouTube channel named Aayudh then uploaded a video on December 3 about the “conversions”, saying that “Vidisha’s biggest school was under the grip of the conversion mafia”.

As the “news” spread on social media networks, local residents in Ganj Basoda wrote to Vidisha Collector two days before the attack, demanding a police complaint and strict action against the school within seven days, failing which the Hindu community will carry out a “violent protest”, the letter stated.

A letter to the Vidisha Collector by local residents threatened a violent protest.

Interestingly, the police termed all the allegations about conversions as false. “We have questioned the school and the church authorities and have found that parents of these children were also Christians. So it doesn’t seem to be a matter of conversion. We are investigating the attackers and have made arrests as well. Investigation is under process and will take necessary steps against the culprits,” said Vidisha SP Monica Shukla.

Vidisha SDPO Bharat Bhushan Sharma, who is investigating the matter, said, “In our preliminary investigation, we have found that these allegations of conversions are false...We are investigating further...We have arrested 14 attackers in all but they were released on bail...we will arrest other rioters as well.”

A case was filed under IPC Sections 147 (punishment for rioting ), 148 (rioting, armed with deadly weapon) and 427 ( mischief causing damage to the amount of 50 rupees). Of those arrested, four were from the Bajrang Dal and the rest affiliated to the VHP.

A day before the attack and ahead of the exam, the school had approached the police seeking protection and filing a complaint against the YouTube channel. “Local SHO assured us of adequate safety, but the next day only a handful of cops were there outside the school who were not able to control the large mob which went on a rampage,” said Father Joselee Cyrokave, Priest of St Joseph Parish.

Anthony Tynumkal, the school’s principal, said, “Children who were giving exams that day were traumatised...Some of them were crying when rioters were sloganeering and pelting stones at school buildings. The rioters have attacked the school just on the basis of rumours and false allegations spread by a YouTube channel. They have destroyed property of the school worth Rs 10-15 lakh. We have met the CM and he has assured us of appropriate action against the culprits.”

School authorities said the building, a four-wheeler and two-wheeler belonging to the institute were damaged.

The Sagar Catholic Diocese, which the St Joseph Parish is part of, blamed “two to three fringe elements” making “false complaints to NCPCR” and the commission issuing orders “without verifying the facts”.

The complainant and NCPCR

In a letter to the NCPCR on November 15, Ratnagiri-based former RSS pracharak Vinay Joshi, who runs the Legal Rights Observatory, demanded a probe, alleging that the Sagar Diocese is carrying out conversions of poor children in orphanages run by them. He named 16 institutes run by the diocese and referred to a ‘holy communion’ of eight children at the Ganj Basoda parish on October 31, as mentioned by Sagar Voice, the monthly newsletter of the diocese.

As per Christian texts, holy communion is one of the seven sacraments in which Catholics gather with bread and wine to remember the last meal Jesus Christ had with his disciples. “Once a child attains the age of 9-10 years, a holy communion ceremony is carried out. It’s not a conversion procedure. Only people who follow Christianity can participate in it,” said a nun.

Summi Desai, who was the station house officer of Ganj Basoda police station at the time of the incident, said, “I met the parents of those children and they were Christians. Those children were also Christians and that ceremony was a ritual of Christianity.” She was transferred after the incident. “We sent 15 police personnel to the school. We thought that they were only going to give a memorandum so 15 cops were enough but we had no idea that it would turn out as a mob attack.”

“We get requests from the parents of children after which we speak with the bishop and do the communion ceremony. It's like a thread ceremony for Hindus. Our diocese posted about the ceremony on the website and these people took those photos and termed them as conversion without verifying it,” said Father Joselee Cyrokave.

Asked about the same, Vinay Joshi said, “We have not verified it. We just wrote to NCPCR that the diocese has mentioned about the ritual on the website and it should be investigated as in Christian institutes, the majority of students are Hindu...we have not even made an allegation, we have just alerted. NCPCR has also not made any allegations, they just demanded to produce the children in front of the child welfare committee.We just wanted to verify...But when this news broke out chaos erupted.”

In 2016, LRO filed a complaint against four journalists and a media organisation in Assam over criticism of the contentious citizenship law; the Union ministry ordered action.

In April 2017, LRO threatened India Today Group with a police complaint for inviting DU professor Nandini Sundar for a debate on the Maoist insurgency. In June 2021, it filed a complaint against senior IPS officer Sunil Kumar P V of the Andhra Pradesh cadre for running an organisation by the name of Ambedkar’s India Mission and promoting “hate” against Hindu religion among the Scheduled Castes.

In October, it filed a complaint to the NCPCR against the NCERT for including a manual on “inclusion of transgender children in school education” recommending steps towards gender sensitivity in schools. The manual was then taken off the NCERT website.

NCPCR Chairman Priyank Kanoongo, who has taken immediate cognizance of the LRO’s complaints, has been a member of the commission since 2015 and was also closely associated with the RSS. He first became the NCPCR chairman in October 2018 for a tenure of three years but was granted another extension.

Kanoongo is no stranger to controversy. Amid the Shaheen Bagh sit-in, he wrote to district authorities in the capital over a complaint about children being misled about the law. Sedition cases were filed against two groups in Patna on the order of NCPCR, accusing them of teaching “anti-national” lessons about CAA-NRC to street children.

In March, Kanoongo sought a police complaint against an NGO called Persecution Relief for creating a “dreadful image” of India by stating that Christian institutions in the country are being harassed.

When Newslaundry asked Kanoongo if the information about the alleged conversion was confirmed as the police denied the same, instead of responding to the query, he demanded to know the names of the police officers who had denied any conversion. When informed that investigating SDPO has stated this, he told his office to bring Bharat Bhushan Sharma on a conference call. He then started questioning Newslaundry if there is any verification that the eight children were not converted.

After repeated attempts to ask whether he had verified information about the alleged conversions, Kanoongo said, “Kya main trikaal darshi hoon (am I omniscient)?... you should work within the limits of a reporter and should not investigate a criminal case.”

“Freedom of Religion Act came into practice in Madhya Pradesh in 1968. As per the Act, a record should be maintained by the collector of the conversions which took place after 1968...We have asked the collector to check...Till now he has not replied.”

A few minutes later, Newslaundry got a call from Vidisha SDPO Sharma. “As of now, you write that the whole matter is under inquiry and we have arrested the people who attacked the school. Taking into account the history we cannot say anything now.”

Asked whether he received any call from the NCPCR before calling Newslaundry, the SDPO replied in the affirmative.

On December 3, Aayudh channel broadcasted a nine-minute segment with the headline “Vidisha ka sabse bada school conversion mafia ki chapet mein hai (the biggest school in Vidisha is under the grip of conversion mafia).” It claimed that by “sprinkling a few drops of water on the children, their culture and identity were changed within two minutes”. The show cited letters by the NCPCR and Joshi to back the charge.

After the incident at the school, the channel ran two more shows with similar claims.

The channel is run by Ashutosh Bhargava, Ankit Sharma and Saurabh Kumar. As per their Facebook accounts, Sharma and Kumar have previously worked with the RSS-run Viswa Samwad Kendra while Bhargava was an RSS volunteer. Kumar also claimed to have worked with the media monitoring cell of the BJP in Madhya Pradesh.

“We constructed our story on the basis of the letter of complaint and the notice of NCPCR,” said Saurabh Kumar, denying any association with any political or social organisation.

Asked whether they verified the claims with families of the eight children or the parish, or if they knew the difference between holy communion and conversion, Kumar said, “No, we haven’t spoken to them, but we have not concluded anywhere in our story that conversion was happening. We mentioned that things will be revealed only after an investigation...we said a committee should have been set up and the collector has not taken any action...we condemn the attack on school and do not support any kind of violence.”

Nilesh Agrawal, the Bajrang Dal chief in Ganj Basoda who called for a gathering outside the school on the day of the incident, said, “Saint Joseph church has posted on its social media account that they have converted eight children...Then one NGO in Maharashtra which keeps an eye on the conversion activities of these people wrote to NCPCR about conversion of eight children who in turn issued the notice against the school...Then Aayudh YouTube channel broke the story...After the story came into public glare, we and residents of Ganj Basoda demanded the school to reveal the names of eight children...We also wanted to know about the parents of these children because definitely these people are not from Italy or Britain and may have adopted Christanity at some point of time here only.”

“Sometimes, when repeated requests fail, people resort to violence. But whatever it is, we don’t support the attack on the school...our people tried to stop the miscreants,” he claimed. 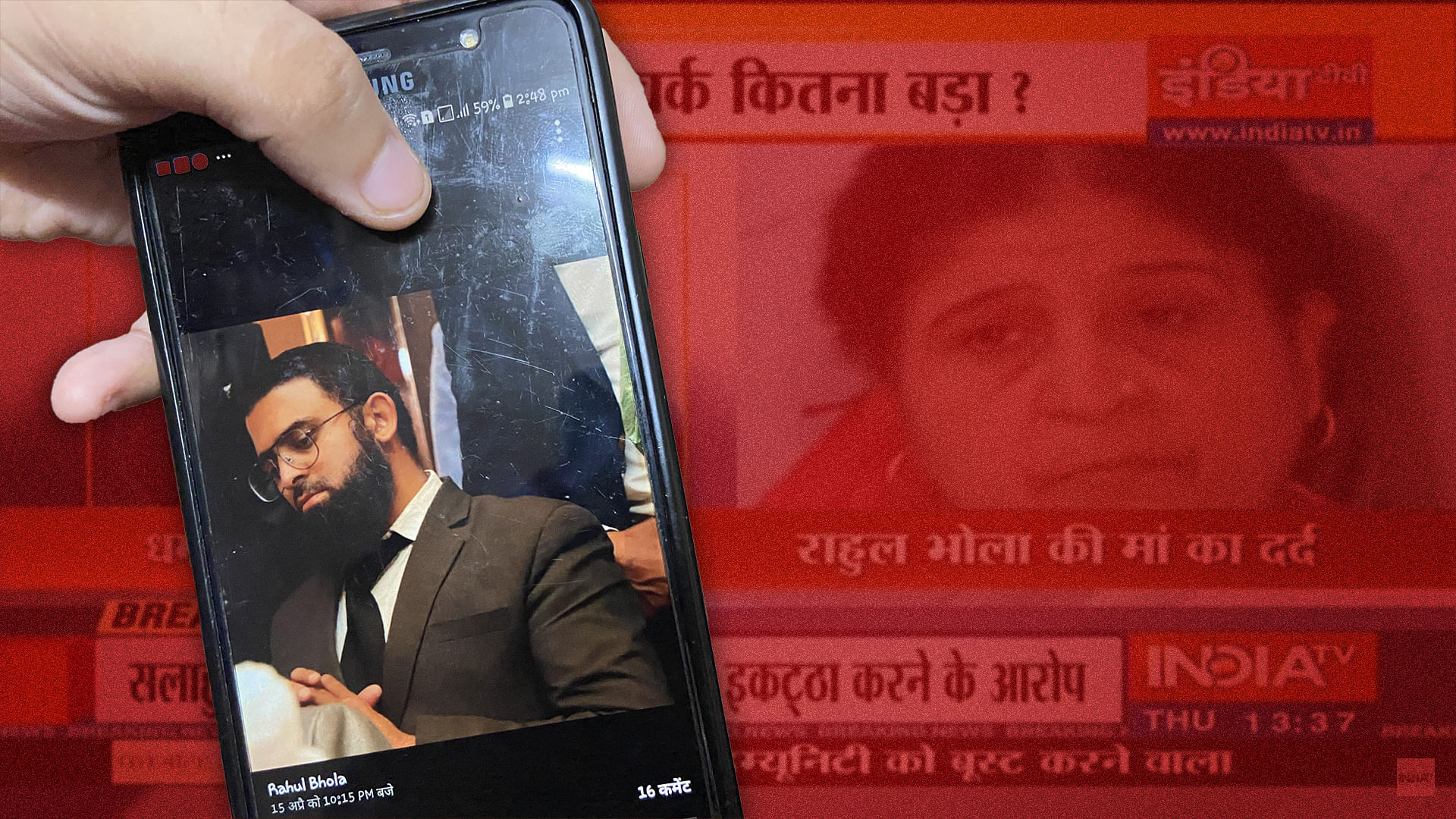