The largest strike by MSRTC workers has left 250 bus depots in Maharashtra paralysed for over 85 days now.

Vishnu Kamble, 33, has been a conductor with the Maharashtra State Road Transport Corporation (MSRTC) for 12 years. He has a 13-year-old son and a daughter who is 11 years old. “Look at him,” Kamble said, holding up a photo of his son. “Does he look like he’s old enough to be working? Every day, he walks 4 kilometres across hilly terrain to work in someone else’s farm so that he can earn Rs. 200.” Kamble’s daughter has also started working as an agricultural labourer.

“At a time when they should be studying, they have to work,” said Kamble, who is from Aurangabad.

Kamble says his children are in this predicament because the salary he gets from MSRTC﹘Rs 16,000 a month﹘is not enough to take care of the family and repay the bank loans against his name. That’s why Kamble joined thousands of fellow MSRTC staffers when they began what would be the largest and longest strike MSRTC has seen since its inception in 1950.

On October 28, 2021, more than 90,000 MSRTC workers went on strike and the state transport (ST) buses stopped plying their usual routes.

86 days later, the MSRTC workers’ strike has lost some of its momentum. Workers’ unions have distanced themselves from the protest. The courts have sided with MSRTC, describing the workers’ continued refusal to work as illegal. In January this year, more than 11,000 MSRTC staffers were suspended for participating in the strike.

However, Kamble is among the 100-odd MSRTC employees who﹘spurred by both desperate financial straits and the fear that the loss-making state transport corporation will be privatised﹘say they are determined to remain on strike until their demands are met. Topmost on that list is a merger with the state government that would ensure staffers are absorbed as government employees.

It’s a demand that’s not likely to be met, say MSRTC insiders, which leaves the workers and the transport corporation in a stalemate.

The largest strike in MSRTC history

The MSRTC﹘whose motto is jithe rastha, tithe ST (“where there’s a road, there’s an ST bus”)﹘has around 18,449 buses and 1,02,000 employees who serve roughly 67 lakh citizens daily. Set up in 1950 after a Road Transport Corporation Act was passed by the Centre, MSRTC runs low-cost ST buses that are a lifeline for people in rural Maharashtra in particular.

Until March 2020, the state transport corporation was making revenue of approximately Rs 20 crore each day. With the onset of the Covid-19 pandemic and subsequent lockdowns, MSRTC started incurring massive losses. When services resumed properly after the second wave in 2021, daily earnings dipped to approximately Rs 10 crore. Salaries were delayed for months, leaving many workers in desperate conditions.

“Every few months, a couple of workers die by suicide due to financial problems. Only then does the government and media pay attention to our problems. But why should we have to have to die for this,” asked Jagarnath Dhembre, 41, a bus driver with MSRTC who has came to Mumbai from Nanded on November 10, 2021 to participate in the strike. While MSRTC officials say they don’t have any official record of employee suicides, advocate Gunaratan Sadavarte told the High Court of Bombay in December 2021 that more than 54 MSRTC employees had died by suicide in the past year.

On October 27, 2021, a joint action committee of 27 MSRTC workers’ unions declared a hunger strike which was called off within 24 hours after the committee met with state transport minister Anil Parab. However, more than 90,000 MSRTC staffers from 250 bus depots in Maharashtra went on strike from October 28, 2021. The agitation intensified from November 9, 2021, and MSRTC workers from across Maharashtra gathered at Azad Maidan in Mumbai.

This is the biggest strike in MSRTC’s history and has left the state﹘particularly rural areas﹘paralysed. As lockdown restrictions are gradually lifted in Maharashtra, the absence of ST buses is a major impediment since in many rural areas, buses run by MSRTC are the only viable public transport available to locals.

However, those on strike argue that their backs are also against the wall.

“We are supposed to receive salaries by the 7th of every month. If we don’t get paid by then, we struggle to pay rent, to pay for milk, for everything,” said Ranga Raut, 34, who is from Solapur and has been a driver with MSRTC for seven years. “Electricity is cut in our homes sometimes because we haven’t been able to pay the bills. Our reputation in society is also ruined.”

The response to the strike

“Even after working day and night, we can’t feed our kids, educate them, take our parents to doctors for treatments….what’s the point of this then?” Raut told Newslaundry. “To educate our children, we have to always take loans from the state transport cooperative bank and when that option is exhausted, from private lenders. It’s not an option, it’s do or die.”

The workers’ union Kanishth Shreni ST Karmachari Sangh was initially involved in the strike, but called it off after 54 days, following a round of discussions with Parab. Some staffers returned to work in January following appeals from Nationalist Congress Party (NCP) chief Sharad Pawar and Parab, who is also the chairman of MSRTC.

In a hearing last month, the Bombay High Court held that there cannot be “indefinite mourning or strike” by MSRTC workers, as this means non-plying of buses, which affects a large number of people. A labour court in Mumbai said on Monday that the strike was “illegal.”

MSRTC officers have been instructed to visit the homes of the employees on strike and ‘counsel’ them and their family members so as to convince them to return to work.

Dhembre said he’s been told a show-cause notice has been issued against him, but he has not gone to the depot to collect it. “They have suspended and terminated so many of us, we have no hope from them. But if thousands of us give up today, no one else will fight in the future. The government and the media only look at us when someone commits suicide. But we want our people to stop dying,” he said.

There is widespread fear among workers that the loss-making MSRTC may be privatised. An officer from MSRTC rubbished these rumours when speaking to Newslaundry. However, denials from officials have not dispelled the fear of losing jobs because of privatisation. This is why those on strike are demanding MSRTC workers be absorbed as state government employees. This would increase salaries and grant workers benefits like a housing allowance, dearness allowance and medical services.

According to officials who spoke on condition of anonymity, the state government does not want to merge with MSRTC because doing so would set a precedent that would require employees of all loss-making corporations to be absorbed in similar fashion. The state can’t afford to do so, say officials.

The lack of union involvement and leadership hasn’t helped the workers’ cause.

An MSRTC officer also told Newslaundry that the demand of a merger with the state government was not communicated to them when the joint committee of unions met with Parab in October 2021.

“All the unions are linked to political parties. We gave our demands to the recognized unions who spoke to the government, but for their own greed, they put our main demands to the side and negotiated a deal with the state,” alleged Dhembre, who has been working as a driver for MSRTC for 12 years.

Of all the workers’ unions, only the ST Kamgar Sanghatana is recognised by the MSRTC to negotiate salary agreements and put forward any demands that the employees may have. Sandeep Shinde, president of ST Kamgar Sanghatana, told Newslaundry that the union was never affiliated with the strike.

Despite the lack of obvious leadership, some of the demands put forward by the workers have been met. These include an increase in salary and dearness amount as well as a court-appointed committee to look into grievances.

For those who remain on strike, this is not enough.

MSRTC officials say the lack of leadership among the workers on strike makes negotiating with them difficult. “Who do we talk to? They don’t have a union associated with them now, and there’s no leader,” said an official.

Since restrictions were placed on public movement during the third wave of Covid-19 in 2021, the workers who are on strike have developed a schedule.

Dhembre, for example, sits at the designated protest site in Azad Maidan all day till 5pm, when Covid protocol requires the protestors to vacate the area. Police personnel are stationed at Azad Maidan to make sure no protestors remain after 5pm. Dhembre then goes to platform number 18 at Chhatrapati Shivaji Maharaj Terminus, where he spends the night before returning to Azad Maidan the next morning. Some of the workers sleep on footpaths. A few find shelter for the night at friends’ homes.

“We won’t leave until our demands are met and we get justice,” said Dhembre. 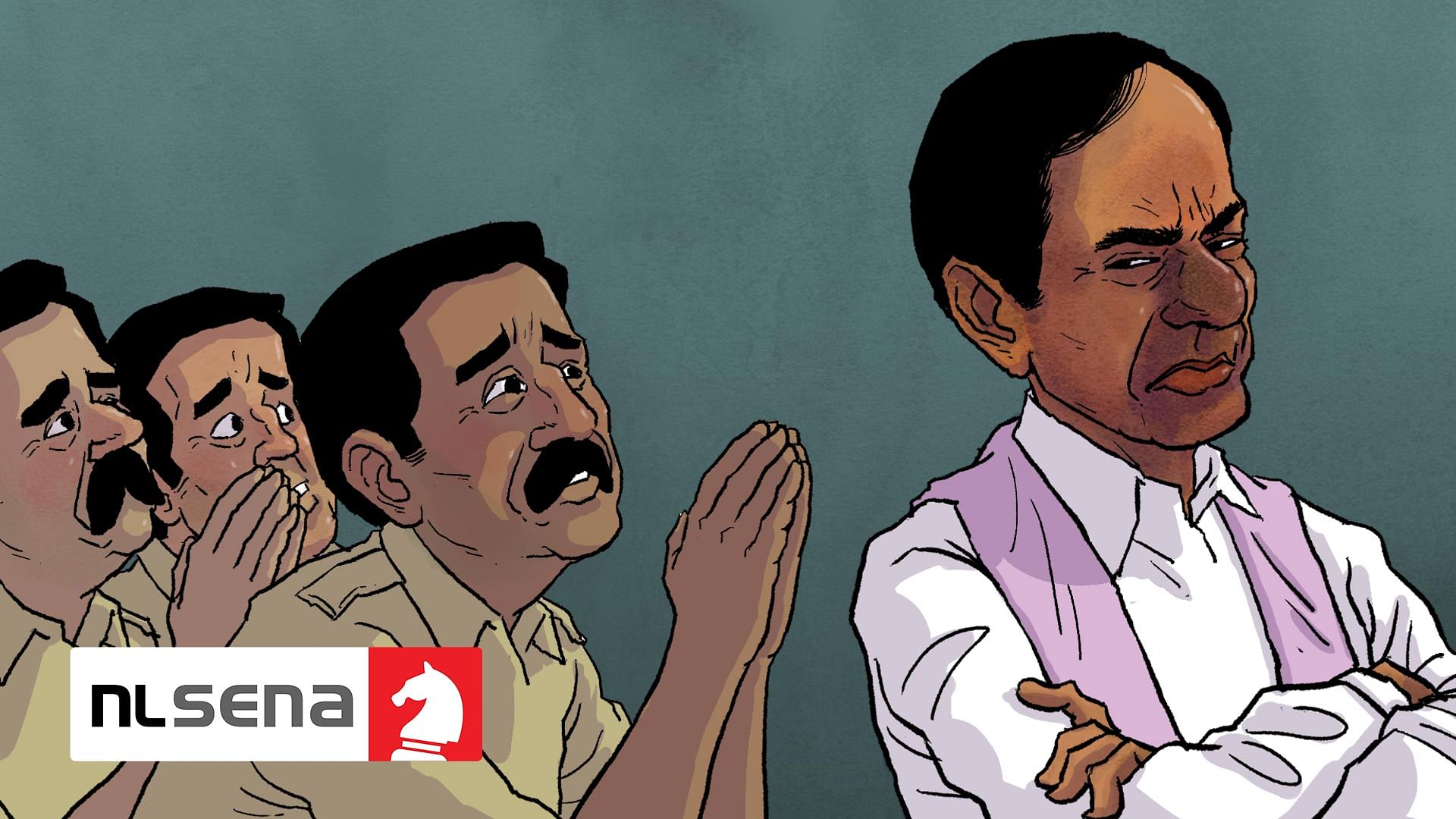