Of Facebook's 50 top spenders, 20 are pages run by political parties or their supporters

It’s no surprise that political parties have turned to online advertising since the pandemic, but there are also ‘fans’ spending big money on promoting certain parties and leaders – particularly on the eve of elections.

Political campaigns in India have come a long way. Once upon a time, door-to-door visits marked the onset of a political campaign. Now, in the age of the pandemic, lockdowns and social media, it’s screen to screen.

According to a report in the Indian Express, Facebook and Google’s combined revenue for the financial year of 2020-21 was Rs 23, 213 crore. Facebook India and Google India made up 80 percent of domestic, digital advertisement revenues.

When political campaigns were forced to shift their focus to online events, personal blogs and outreach programmes using the internet, the revenue of social media companies in India grew at a rapid pace. Another report by the Indian Express showed that in the financial year 2020-21, Meta-owned Facebook reported a 41 percent year-on-year increase in gross advertising revenue, while its net revenue grew by 22 percent.

A closer look at Facebook’s Ad Library report reveals that out of the top 50 spenders on the networking site, at least 20 were pages run either by political organisations or associated organisations and self-declared fans of politicians.

The data clearly points to political parties spending on advertising through social media as part of their outreach. Facebook’s advertising policy requires pages running political and social content to disclose their sponsors in the form of a disclaimer. However, some of the pages that have spent large sums of money on advertisements do not clearly mention the sponsors behind the posts. Some use messages urging voter participation and social change campaigns to promote specific political parties.

According to the report, the page “Banglar Gorbo Mamata” (Bengal’s pride is Mamata) is the highest spender in this time period, having spent Rs 58,662,438.

The page, created in July 2019, is managed by the Indian Political Action Committee, “the platform of choice for students and young professionals to participate in and make meaningful contributions to political affairs and governance of the country, without necessarily being part of a political party”.

“Banglar Gorbo Mamata” is listed as a political organisation in its bio. It posts and spends regularly to promote All India Trinamool Congress’s and its founder-leader, chief minister of West Bengal, Mamata Banerjee.

'Banglar Gorbo Mamata' is listed as a political organisation in its bio. It posts and spends regularly to promote TMC and its founder-leader Mamata Banerjee.

For all these pages, the relevant political party’s name is given and the necessary disclaimers are in place.

A close second in advertisement spending is the official, verified page of the BJP, having spent Rs 46,330,129.

The page, with 307,666 followers, has not posted anything since August 2019. In the past, the page regularly posted political content promoting prime minister Narendra Modi. At the time of writing this article, the page is dormant with its linked website domain name on sale and phone number not reachable.

At the time of writing this article, the page is dormant with its linked website domain name on sale and phone number not reachable.

The page “My First Vote for Modi” is another example of a page with political content, but without proper disclaimers. Created in January 2019, the page is “a platform to engage and mobilise the youth to contribute in PM Modi's vision for New India.”

At the time of writing this article, the only advertisements running on the page were those encouraging the youth to participate in a survey to share their experience of social work. However, previous advertisements on the page (see below) were taken down by Facebook because they violated Facebook’s advertisement policy.

The page 'My First Vote for Modi' is another example of a page with political content, but without proper disclaimers.

The page, which was sharing seven to nine posts a day, has been lying dormant since September 2021. The website sponsoring the advertisement on the page is no longer active.

The page, which was sharing seven to nine posts a day, has been lying dormant since September 2021.

Created in January 2019, the page is 'a platform to engage and mobilise the youth to contribute in PM Modi's vision for New India'.

Yet another page that was once actively sharing political content, but is now dormant, is “Phir Ek Baar Imaandar Sarkar” (Once again, a government with integrity).

The page was active between June 26, 2019 and October 22, 2019, during which time it spent Rs 2,595,975 on advertisements. This was also the time during which Assembly elections were held in Haryana.

Since October 2019, “Phir Ek Baar Imaandar Sarkar” has been dormant. The website that the page used to get verified by Facebook (for the purpose of running advertisements on social and political issues) no longer exists. When we tried reaching out to the page’s admin, we got an automated response asking us to share and follow the page.

The pattern that emerges from these once-active and now-dormant pages is that they seem to propagate certain political ideologies through advertised posts that were invariably uploaded around the time of elections. The advertisements were then taken down by Facebook because they violated Facebook’s advertising policy. After this, the pages became dormant.

Among the top 50 spenders on Facebook advertisements between 2019 and 2022 is a page titled 'Modi 11', which describes itself as a personal blog.

The posts on the page display a clear pro-BJP bias and the page is currently posting content related to the upcoming elections in Uttar Pradesh (UP). Having spent Rs 4, 909, 934 on Facebook ads since its inception, the page spent Rs 531,663 in the last seven days (between January 14 and January 20). While in the past, advertisements have been taken down for being in violation of Facebook’s advertising policy, the exact nature of the violation cannot be specified.

A Meta official told Newslaundry on condition of anonymity, “Where appropriate, we may restrict issue, electoral or political ads. We don’t allow ads that violate our ad policies and also disable ads flagged to us by the Election Commission of India which we find in violation of local election laws.”

Like “Modi 11”, the page “Phir Ek Baar Modi Sarkar - Uttar Pradesh” (Once more, a Modi government - Uttar Pradesh”) posts political advertisements. The information section of the page reveals that it is yet to complete its verification with Facebook.

Without proper verification advertisements, which are categorised under either “social” or “political”, technically cannot be published on a page. However, the verification process may be reflected as incomplete if certain features (like two-factor authentication) have not been enabled by the admin of a page.

The importance of online advertising through social media is evident from the way pages like “Modi 11” “ Phir Ek Baar Modi Sarkar - Uttar Pradesh” have doubled down on their recent ad spending. Will this page, its affiliated website and app (available on the Android app store) remain active after the UP election has concluded? It’s anyone's guess.

Former chief election commissioner of India, Dr SY Quraishi, told Newslaundry, “Political advertisements on social media should be treated the same as advertisements on traditional media platforms as such. They should be added to the expenditure of an individual candidate’s overall budget.”

However, some of the pages mentioned in this article are not part of any official campaign. They support their chosen political parties indirectly and as a result, their expenditure is not added to a candidate or political party’s overall spending.

Quraishi also pointed out that according to the ECI’s rules, “third parties promoting a political candidate or a party cannot spend more than Rs 10 for a campaign”. Again, as these pages may not be officially run or managed by people associated with a political party or candidate, their spending does not come under the ambit of the official campaign’s budget.

The pages discussed in the article are among the top 100 spenders on advertisements in the country, according to Facebook’s Ad Library report. There may be countless others that remain under the radar because their spending is lower.

With five states – UP, Uttarakhand, Punjab, Goa and Manipur – about to go to polls, it is worth scrutinising how the ideologies of political parties, like BJP, are being promoted through pages that camouflage their political content.

Update: The headline was changed on February 2; it previously read 'Is it fandom on Facebook or an ad for a political party?'.

What would social media look like if it served the public interest? 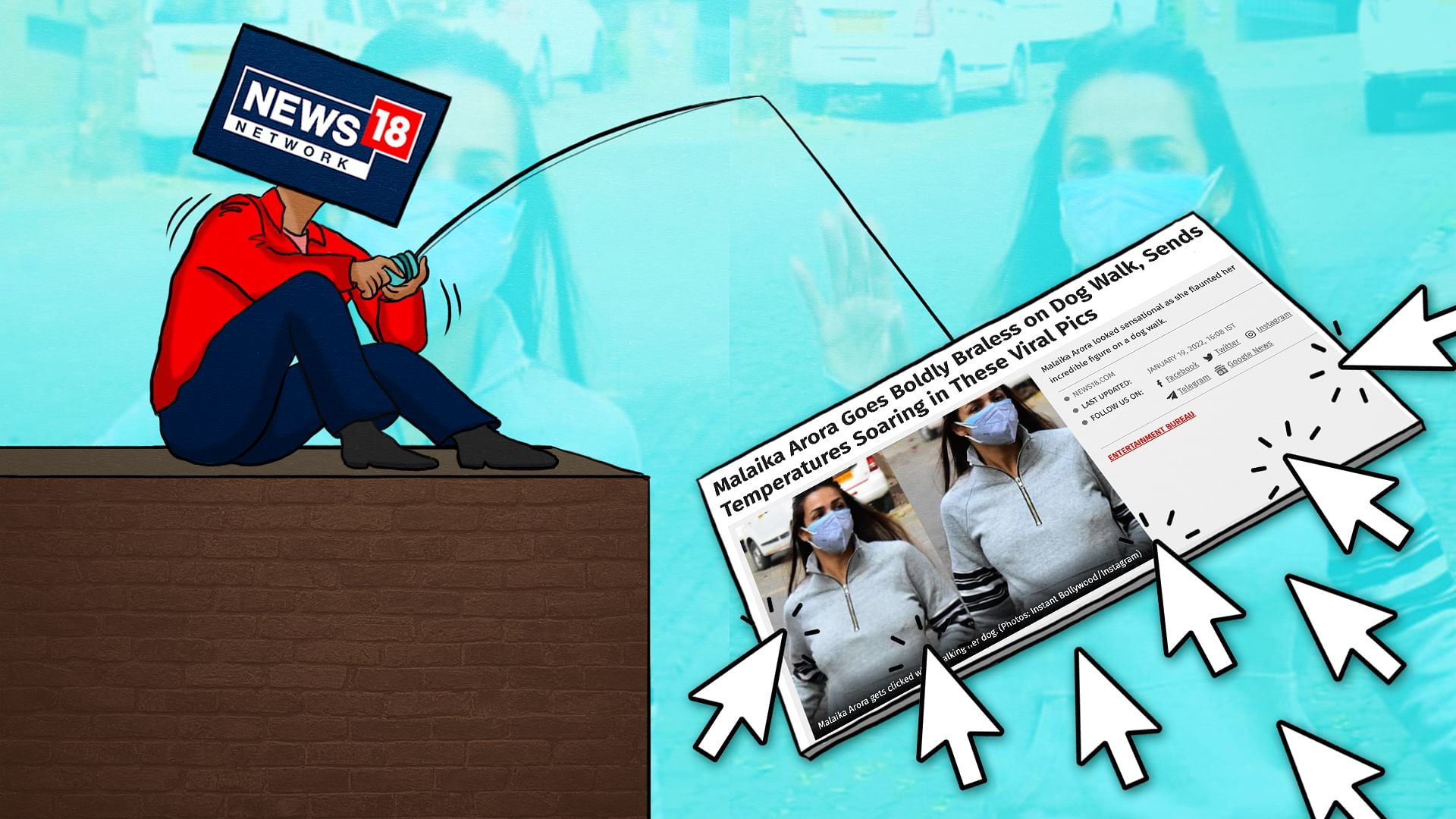 ‘A click is all that matters’: Lessons on ad revenue from News18’s ‘report’ on Malaika Arora