And how most media has spectacularly failed in presenting the details of what is happening.

March 15, 2022. By coincidence, not by design, three events took place that converge in different ways.

First, the United Nations adopted a resolution (opposed by India) to declare March 15 as International Day to Combat Islamophobia.

Second, the Karnataka High Court gave the much-awaited ruling on the ban of hijab, or head covering, in government schools and pre-university colleges in Karnataka.

And third, for the first time the prime minister of India went out of his way to endorse a Bollywood film.

The connection between the three events might appear nebulous. But the way events are playing out post the Karnataka High Court ruling, and the promotion of the film The Kashmir Files fit neatly into the growing atmosphere of Islamophobia in India. Hence, the significance of a UN designated day to fight this, for whatever such days are worth.

First, let's look at the 129-page hijab judgement, as it has come to be known. Only the concerned and the affected might plough through the text of the judgement. For the ordinary person, it is the media that explains what the ruling is all about, whether it has flaws, whether it is sound, etc.

Here, the popular media’s failure is spectacular. I have argued this before, and must reiterate, that even the best of television channels (and their numbers can be counted on the fingers of one hand) that at least make an attempt to address social and political issues seriously fall short because of the format they have adopted, and which they do not want to change.

In half an hour, three or four people are invited to give their views on a ruling that requires explanation, not opinion. As a result, you have people trying to say something and just when they get to the core of their argument, anchors plead that they have completely run out of time! Why, when you know the time allotted, do these channels not come up with a format that allows for a proper presentation of facts on such a subject? The mystery remains.

Print media, which is now on the decline as shrinking advertising revenue is being swallowed by television and digital, still provides hope. You get well argued articles by legal scholars that explain this kind of judgement. It cannot be abbreviated into a few paragraphs. You also get shorter editorial comments, like this in Indian Express and this in the Hindu, that provide perspective. The latter, especially, is worth reading because it reminds us that the judgement, which has focused on religion, has missed the point entirely. “Freedom of religion is important because freedoms are important, and not because religions are important,” the editorial concludes.

And you get explainers, like this in Scroll, that provide you with more details about the judgement.

Although this is a commendable effort, print and many independent digital platforms are struggling to survive. Often many of the best articles are behind a paywall. Thus, unless you get the physical edition of the newspapers, or subscribe to the digital edition, you miss out on these explanatory articles.

The biggest problem now is that many, especially of the younger generation, are not watching news on television or reading the newspapers. They get their news through social media sites, like Facebook or Instagram, or through WhatsApp forwards, or through news aggregators like InShorts that give you headline news.

This means they just get bullet points without the substance of any development. When it comes to something like the hijab judgement, all you know is that the court dismissed the plea by the students to wear the hijab inside the classroom. How did it come to this conclusion? A headline cannot capture that. In any case, journalists who have worked in print media know that headlines often fail to accurately reflect what is reported. They are designed to attract eyeballs.

Even more insidious are the posts on social media that twist the subject to suit the belief systems of the audience. Therefore, if the aim is to demonise Indian Muslims, it is easy to distort the entire hijab controversy by either blaming the students for being rigid and unreasonable, or, as is being done by some BJP leaders in Karnataka, alleging that they are part of a “terrorist group” and have been instigated to oppose the ban. It is this kind of “news” that gains currency on certain social media platforms and is lapped up and shared widely.

Incidentally, while on the subject of social media, one of the most important investigative stories to emerge in these last weeks is by the Reporters' Collective on surrogate political advertising on Facebook. The story on the Al Jazeera website stretches into several parts. Each one is long and detailed as it draws together the connection between a big business house, Reliance, a company owned by it that paid for the political advertisements, and Facebook.

The series is a must read because it explains the ecosystem that has evolved over these last years that privileges one perspective – that of the right-wing groups and parties, over others, and the crucial role played by social media.

And finally, you have the recently released Hindi film The Kashmir Files.

Irrespective of the merits of the film, which focuses on the exodus of Kashmiri Pandits from the state in the early 1990s at the height of militancy, the timing of its release, the endorsements it has received, and the response of the audience have to be noted within this larger context we are discussing.

In the last week, many senior BJP ministers, including the prime minister, have gone out of their way to urge people to watch the film. It has been given tax free status in the BJP-governed states and dozens of special screenings have been organised for elected representatives.

In this article in Newslaundry, writer Asim Ali gives his views on the contents of the film, what it got right and what it did not. But more interesting is his description of the audience response at the showing he attended in a theatre in Delhi. He posted videos of people jumping up and shouting religious slogans and openly communal, anti-Muslim ones. Social media, in fact, is full of videos of this kind of response from different parts of the country.

The Kashmir Files is not just another Bollywood film. Even though it is being projected as an effort to right a historical wrong, which is the lack of acknowledgment of the sufferings of the Kashmiri Pandits, it is more than that. It comes at a time that suits those invested in cleaving this country on religious lines. The audience response, and the hate-filled cries for vengeance after screenings, confirms this.

Alongside the fallout of the hijab verdict, which is primarily on the future of Muslim women students, to the heightened communal atmosphere stirred up by this film, resulting in police in Delhi, for instance, being asked to be alert in mixed neighbourhoods where the film is being screened, we are in for more difficult times. 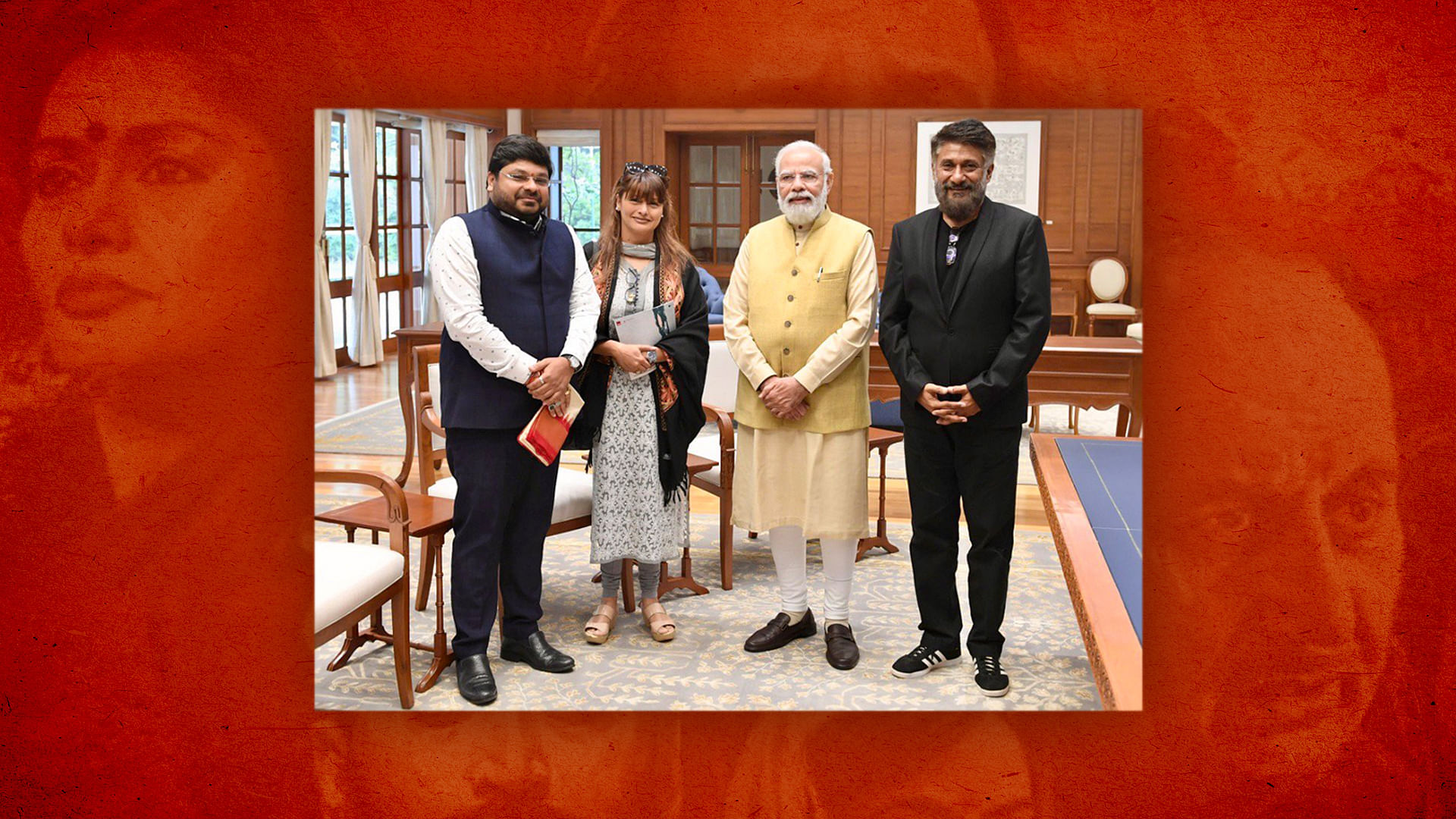