Vendors hoped their business would pick up after Covid restrictions were lifted, but the redevelopment project disrupted their plans.

Anita Sahni hunched in the shade of a barricade, attempting to shield herself from the scorching sun.

Anita is a vendor at Delhi’s India Gate, selling cold drinks, water, tobacco and alphabet keychains, and also applying henna. Originally from Bihar, she moved to Delhi 26 years ago. She did brisk business, mainly catering to tourists. Her husband works alongside her, while their two sons work as photographers at India Gate.

But things changed once the Covid pandemic began and the subsequent lockdown. The government’s redevelopment of Central Vista – a project conceived in 2019 that is expected to take six years to complete – compounded their problems.

“What we collectively earn is not sufficient at this time,” Anita said, “especially when inflation is touching the sky.” She also spends Rs 300 everyday to commute to India Gate from her home in Trilokpuri, as well as Rs 200 per week on “bribes”.

“This is a distressful place to work,” she said. “Touts collect weekly and monthly bribes from vendors and if you do not pay them, they say they will call the police, and the cops will throw you and your stuff out. Once, a cop threw my water and cold drink bottles on the road. I pleaded with him, saying, ‘I have spent my whole life here. Where will I go?’”

Other vendors at India Gate have similar stories to tell. “I got both my daughters married from the income I earned at India Gate,” said a vendor who sells cold water. “But now, I can’t think of it.”

Another vendor, Ramdas, has been selling bhel puri here for the last 32 years. Originally from Hathras in Uttar Pradesh, he told this reporter about the good old days, when high footfall of tourists and others meant good business for him. Ramdas used to earn between Rs 700 and Rs 800 a day, he said, but his earnings are now only Rs 200-300.

Tourists, vendors and photographers at the site.

Ramdas had gone back to his village to wait out the Covid-induced lockdown, but “suffocating debt” led him to return to the national capital. But due to the Central Vista redevelopment project, he said, “cops harass us and don’t allow us to sit near the India Gate canopy.”

When asked about how the project and the pandemic impacted vendors, Ramdas said, “Hundreds of vendors and hawkers were dependent on India Gate. People selling bhel puri, ladoo, gol gappa, ice cream and cold drinks are all badly affected. Many have left the business and many have returned to their respective villages. With no income in hand, how can we pay rent?”

Gol gappa vendors have always been a magnet for visitors to India Gate, according to Satish Kumar, who has been in the business for the last eight years. “We numbered 250-300 vendors, just for chaat,” he said. “But now, only two to three people are left.”

When asked about his daily earnings, he was dismissive. “Filhal toh time pass ho raha he.” Currently, I am just passing the time.

Satish said many of his fellow vendors have changed their line of work; some are now auto drivers, others are daily wagers in factories. But Satish still has hope that his fortunes will change. “Business is far better than a job,” he said. “I am here because I think the good old days will come back after the construction is over.”

At around 8.10 pm, when this reporter was at India Gate, a group of police personnel announced through a loudspeaker that the area needed to be vacated. Within minutes, the tourists, photographers and vendors packed up and left.

One of them was Sonu from Uttar Pradesh’s Badaun, who has lived in Delhi for the last five years. He started off selling candy at India Gate before switching to photography three years ago. His day starts at 9 am and ends at 8 pm, when the police chase them out.

Like the others, Sonu’s life has changed in the last couple of years. “Look at this mess,” he complained. “There is no space to stand. In these circumstances, how can we take good photographs of our customers?”

There is also stiff competition among photographers, with every visitor is surrounded by dozens of photographers like Sonu pitching competitive prices to lure customers.

Another top draw at India Gate has been ice cream vendors, with lines of colourful carts offering different flavours to beat the heat. After their displacement due to the reconstruction project, many vendors have departed, taking up new positions on Janpath and opposite Andhra Bhavan. Vendors told this reporter their numbers at India Gate have dwindled from 150-200 to 20-25 – the low margin of 15 percent and low footfall has made business unviable.

Mahesh Chand Gupta is in his fifties, and has been selling ice cream at India Gate since 1984. “That time was good. We were able to feed our family,” he said. “But now, after the pandemic and the beginning of construction, we have reached a point where we don’t know whether we will get anything to eat or not tomorrow.”

Gupta is also a “BJP worker”, he said, and hopes the prime minister will spare a thought for vendors like him. “I want to thank PM Modi for providing insurance for small businessmen and hawkers,” he said. “But currently our need is space, so that we can stand and do our work. I request the PM to find a solution for us.”

The letter he wrote to the station house officer of Tilak Marg police station.

Laxman dropped out of school after Class 4.

Gupta has also written to the station house officer of Tilak Marg police station, asking for permission for vendors and carts to operate near India Gate. “We don’t want to be an obstacle in the construction work but we should be given a place to stand and install our vends near India Gate as long as the construction goes on,” he said.

Cotton candy vendors spun similar stories. Laxman is only 14 years old but has sold cotton candy at India Gate since he was nine. It started off as a part-time job until the lockdown, after which it became a full-day task. Laxman studied uptil Class 4 at Nimal Primary School in Pandara road before dropping out because, like so many other children, his parents’ income fell drastically during the lockdown and could no longer afford to send him to school. So, he now sells the cotton candy that his parents make at home.

All photos by Anmol Nath Bali. 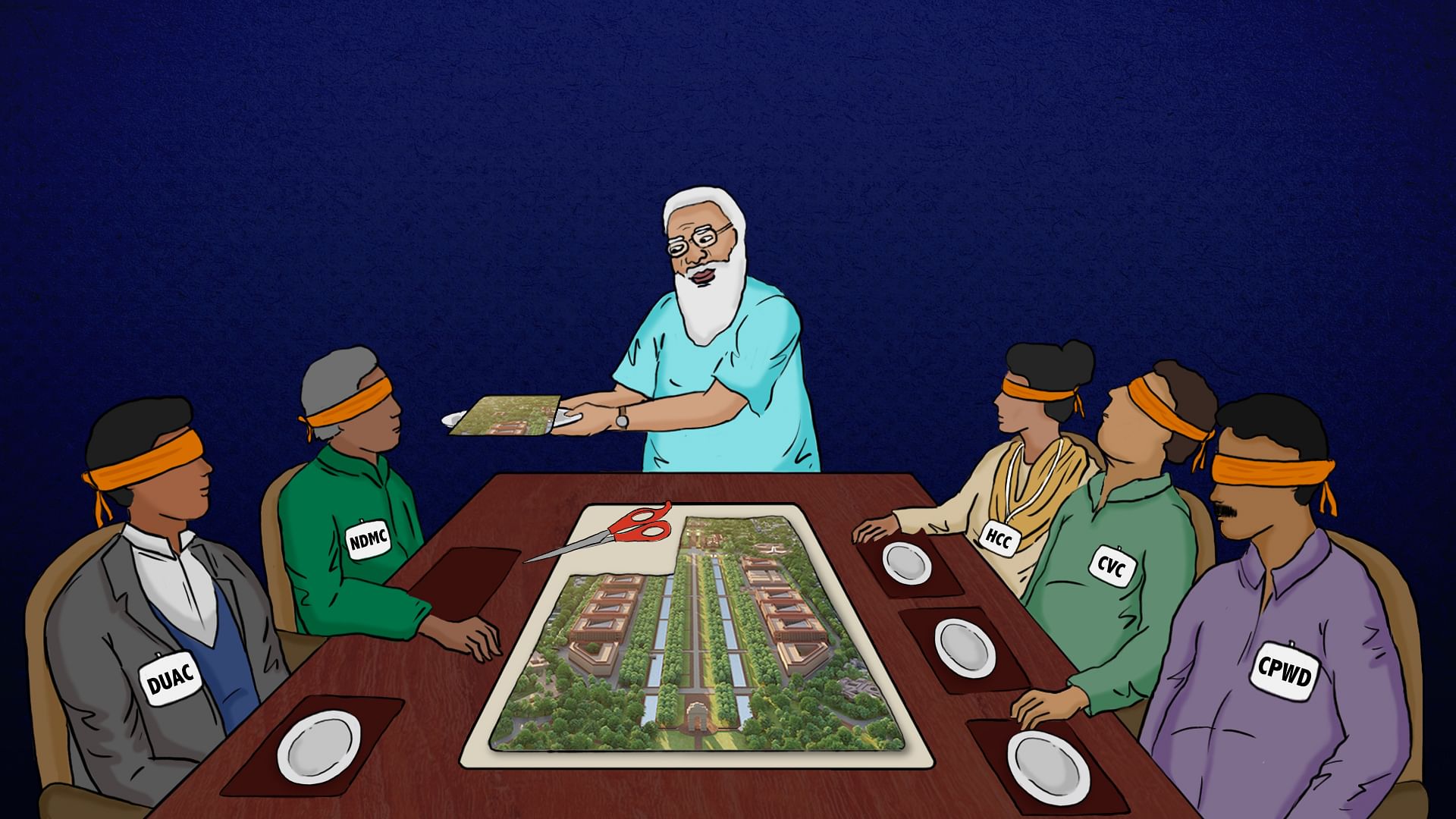