Some hits, some misses: How have Press Club of India’s outgoing officials fared?

They cite Covid and ‘financial constraints’ for the failure to fulfil some of their campaign promises.

It’s that time of year again.

Journalists gather on the lawns of the Press Club of India on Delhi’s Raisina Road, drinking and dissecting the news. Except this time, there’s another topic of discussion – the PCI election that will take place on May 21.

The politics of India is replaced by the politics of journalists. Groups that generally sit by themselves now join their tables as a display of strength, hatching election strategies over their evening whiskeys.

The election last year was fraught with drama. On the one hand was a panel – seen as a “left-liberal” clique – that had been in charge since 2010, on the other was a group of more familiar names seen as being aligned with the Bharatiya Janata Party and its ilk.

This year, the situation is no different.

Here are some of the candidates in the fray.

But in the leadup to the election, it’s worth revisiting the manifesto released last year by the panel that finally won. Titled Committed to the Protection of Press Freedom, it made multiple promises. Were these fulfilled?

Here are the manifesto’s promises from April 2021.

Outgoing president Lakhera told Newslaundry they had “fulfilled a large part” of their promises. The truth, though, is that they didn’t. Lakhera blamed a combination of issues for this – “financial reasons”, Covid “changing priorities”, and the club being closed during the second wave of the pandemic.

“During Covid, people were losing jobs but no employee was let go from the press club,” he said. “They were given financial help despite the club staying closed for many months. Had the club been running regularly, we’d have done the rest of the things too.”

Yet while Lakhera said no employee lost their job, he also said they were only paid “half the salaries due to financial reasons”. “When things got better, we paid them a month’s salary as a bonus this Diwali,” he said. “This is the only press club to do it.”

We went step by step through all the manifesto’s promises to ask Lakhera what was done.

The first promise was Covid vaccination camps for members and their families. The new governing body took charge in April, around the time the second wave – and subsequent lockdown – began.

“When the vaccine became available, it was expensive,” said Lakhera. “People were not able to get it despite standing in queues outside hospitals. We organised a vaccination camp in this situation. Our members brought their whole families and got them vaccinated; many people got their drivers and domestic help vaccinated.”

By June 2021, “570 people from the journalistic fraternity, and their dependents” had been vaccinated.

The second promise was “social security” for members journalists who don’t have accreditation from the Press Information Bureau.

Lakhera said his team held a “discussion about this” in July, when the press club reopened after being closed for three months.

“We started the discussion about insurance, and also spoke to two or three agencies,” he said. “But then December came and with it, the third wave. Then we decided we’ll take this up after the new financial year begins.” The club had been experiencing “financial trouble” at the time, he said, and it took “a lot of effort” to keep it running.

He added, “We are speaking to companies about collective insurance. Through this, we’ll provide insurance to working journalists and photographers.”

Will this include non-journalist employees of the club? “Yes, the press club employees would also be included,” he said. “It’s not like we don’t help our employees in the absence of insurance...Some time ago, two to three employees passed away. We gave financial help to their families from the club’s account.”

The third promise was “free legal consultancy to members for their professional needs”.

“This has been done,” Lakhera said. “We signed a memorandum of understanding with a law firm. Now, if any journalist wants any kind of legal advice, they can get it without fees.”

Lakhera said there were two lawyers on call – the first is Ashok Arora, he couldn’t remember the name of the second. But he told Newslaundry that if we know “any journalist who needs legal advice”, we should send them his way.

The fourth promise was to institute the “Press Club of India awards for excellence in journalism”, similar to the Mumbai Press Club’s RedInk awards.

“The club remained closed since we were elected. We only got the chance to work for a few months due to Covid,” said Lakhera. “When the award has to be given for excellence in journalism, we don’t want to do it hastily.”

He continued, “I’m repeating this. We had to shut down a lot of projects due to financial trouble. Money is required to give awards. We don’t take help from the government or private citizens. We gave the Kalyan Baruah Memorial award after some of our members sponsored it. We also started giving an award in the name of Maulvi Bakar, who was hanged by the British at Chandni Chowk in 1857, because we got a sponsor for it. The Press Club of India shall award excellence in journalism, we are working for it.”

The fifth promise was to “upgrade facilities” for photo and video journalists. Lakhera said a “new media centre” has been inaugurated in the Press Club of India.

“The computers here have all the necessary software,” he said. “Earlier, freelance photographers and others used to roam around looking for Photoshop. Now, they come here and do their work.”

He added, “If you go there and look anytime, you can see journalists filing reports.”

The sixth promise was to hold “regular interactions with domain experts”. Lakhera said Bangladesh information minister Mehmood Hasan had visited to inaugurate the new media centre but that, despite repeated invitations, information and broadcasting minister Anurag Thakur did not attend.

He said a few other programmes had been scheduled, including a visit from Kerala governor Arif Mohammad Khan and a meeting with some MPs for a seminar on media and parliament. The club also organised a discussion on the Pegasus spyware case.

The seventh promise was to “explore options” for online voting in press club polls. This hasn’t happened because, according to Lakhera, it requires a “long-term mechanism”.

“We invited quotations but they were quoting a lot of expenses,” he said. “For now, the regular voting method will continue. Online voting will be considered in the future.”

The eighth promise was to create a “special menu for children on Sundays and public holidays”. This ties in with the ninth promise to “curate more events to engage families and children”.

“We held such events whenever there was some relaxation in Covid rules,” said Lakhera. “We had programmes on January 1, then some artists performed on Lohri. We have been successful in making the press club a family club. Earlier, only eight to 10 people used to come here on Sundays but now, the whole club is full of people. We arranged an ice cream corner for kids which wasn’t there earlier. We arranged the ice cream at a low price.”

He also said, but did not provide details, that his team made the club “much safer for women” resulting in an “increase in the number of women here”.

The final promise was to maintain the club’s “civility, sobriety and dignity”. Does the club take the lead in speaking against attacks on the media?

He added that the club organised these protests regardless of which government was responsible. “Be it Congress, BJP or Left, wherever journalism appeared to be in peril, we stood up and spoke,” he said.

While this might sound like a fairly good score on their report card, not everyone is happy with the body’s work over the past year.

Pawan Kumar, who contested as vice-president in the 2021 election and lost, said, “They haven’t done anything. The lack of imagination is the reason behind it.”

Kumar alleged that “not even half the promises” were completed. For instance, he said the vaccination camp took place but it was due to the work of the government, not the club office bearers.

“Once upon a time, a lot of experts from all over the world were invited here. But this tradition has stopped in the past few years,” he said. “Sometime ago, Nobel laureate Abhijit Banerjee was in India. He was touring Delhi. The press club should have invited him but it didn’t.”

He had more examples: “Right now, the war between Ukraine and Russia is going on. They tried to invite the ambassadors of Ukraine and Russia separately but it didn’t happen. People like them create headlines but they aren’t even trying.”

But the present treasurer is Sudhi Ranjan Sen, who is from the “opposing” camp. What role did he play? “Do you think Sen would give an idea and those people would accept it?” Kumar asked. “It doesn’t happen like that. They don’t listen.”

During the course of this conversation, Kumar implied that the current panel is “linked” to “leftists” and “JNU”. He refused to explain further. Does he think the panel is left-leaning? Kumar chuckled and said no.

Update on May 22: A previous version of this story incorrectly referred to Sudhi Ranjan Sen as Sudhir Ranjan Sen. This has been corrected. The error is regretted. 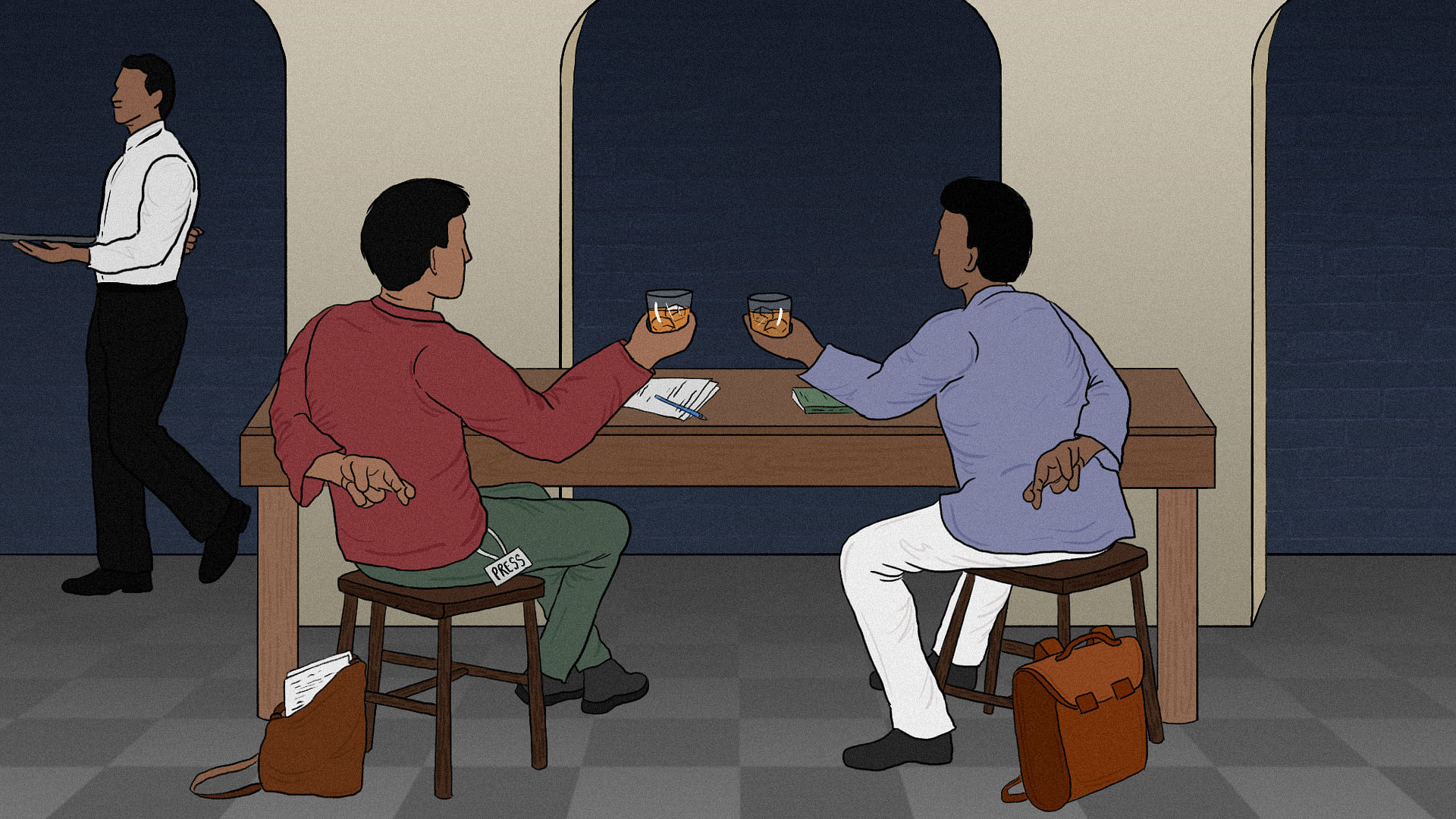