The party’s cadre expected BJP’s Devendra Fadnavis to get the job, not the rebel leader. They are mostly happy but confused.

In the morning on June 30, as the monsoon rains pounded Mumbai, journalists and TV vans swarmed outside Sagar Bungalow, the home of BJP leader Devendra Fadnavis in Malabar Hills. They were anticipating the arrival of Eknath Shinde, the rebel leader who split Shiv Sena and pulled down Uddhav Thackeray’s coalition Maharashtra Vikas Aghadi government. By around 11 am, top state BJP leaders began arriving at the bungalow – Praveen Darekar, Chandrakant Patil, Pankaja Munde, Ashish Shelar, Nitesh Rane – prompting the journalist to chase them with questions or provide live commentary on the hectic activity to their respective TV stations. The dominant theme was whether the newly allied Shinde and Fadnavis would stake a claim to form the next government and whether Fadnavis as the chief minister and Shinde as his deputy would take oath immediately. At around 2.40 pm, as Shinde’s car pulled up amid heavy security, the buzz crescendoed. Several of the TV reporters went on air to predict that Fadnavis would soon take over as the chief minister for the second time.

It didn’t take long for such predictions to be proved way off the mark. Addressing a press conference after meeting the governor later in the day, Fadnavis announced that Shinde would be the new chief minister.

Such is the unpredictability of Maharashtra’s politics.

The announcement caught not only journalists off guard but politicians and the public as well. So, what was the thinking behind it?

According to political analysts, Shinde’s elevation as the chief minister is meant to garner the support of Shiv Sena’s disgruntled cadre for his rebel faction and at the same time counter the anger towards the BJP for orchestrating the collapse of the Thackeray government. It was also intended to shut up critics who were denouncing Fadnavis and the BJP as being “power hungry”.

The rebel Shiv Sena MLAs in Shinde’s faction come from across the state, representing Khandesh, Marathwada, Konkan, Satara, Sangli, Kolhapur, Vidarbha, Thane, Palghar, and Mumbai. Save for Mumbai and Pune, most of these regions have seen the Shiv Sena cadre come out in support of Shinde’s faction after he was made the chief minister. In the previous weeks, however, support for Shinde and Thackeray had been mixed. Shinde’s coronation likely changed the equation.

Baba Bhagat, 58, a local leader of the Shiv Sena in Mulund, Mumbai, said, “It was the dream of Balasaheb Thackeray to make an ordinary Shiv Sainik the chief minister of Maharashtra. The elevation of Eknath Shinde has made his dream come true. We are proud and happy that a Shiv Sainik from among us is the chief minister. But all these conflicts between Uddhav saheb and Shinde saheb should be resolved. Uddhav saheb is a decent man. People like him are rare to find. Shinde saheb should go and talk to him. Our party should stick together.”

If that doesn’t work, Bhagat said Prime Minister Narendra Modi should “step in and talk to Uddhav to resolve the conflict. Ordinary Shiv Sainiks like us have to suffer because of such conflicts within the party”.

Sandeep Raut, 32, a Shiv Sena leader in Dahisar, Mumbai, said, “Shinde saheb is Balasaheb’s Shiv Sainik, so he will not leave the party. We are happy that he has become the chief minister. Conflicts will be resolved if both Uddhav saheb and Shinde saheb get together. It’s true that many Shiv Sainiks were unhappy with senior leadership for allying with the NCP and the Congress, or else 40 MLAs wouldn’t have left. But Uddhav saheb is the Sena chief and whatever decision he takes we are going to support him.”

Shiv Sainiks from outside Mumbai expressed similar sentiments. Nana Bhangire, a Shiv Sena corporator in Pune, said, “The fact is that Eknath Shinde has not left the Sena yet and he is the chief minister. It is good that an ordinary Shiv Sainik has become the chief minister. But we are also a little sad that Uddhav saheb had to lose his post. We don’t know what is going to happen in the future but until Shinde saheb is with the party it's fine.”

Mayur Ghodke, a Shiv Sena leader in Sangli, said, “Shiv Sena runs on the directions of the Sena chief. Shinde saheb has not left the Sena yet, and we Sainiks want him to talk to the Sena chief. They should resolve this conflict. We are happy that Shinde saheb is the chief minister but because of these internal conflicts we are confused about whether we have lost power or not. We don't know whether we should celebrate Diwali or not. Shinde is a Sainik after all and we’re happy for him. He does not have any problem with Uddhav saheb. But he is agitated with Sanjay Raut because he talks a lot.”

Sanjay Raut, an Uddhav loyalist, is a Sena spokesman and editor of the party’s mouthpiece Saamana.

Ghodke continued, “It’s true Shiv Sainiks were facing problems because of NCP leaders who were in the alliance, and Sena MLAs had to bear the brunt. It's good we have an alliance with the BJP. By giving the post of the chief minister to Shinde, the BJP has shown they are bighearted. But this tension within the party needs to be addressed or it will destroy the Shiv Sena.”

Sadanand Chavan, former Sena MLA from Chiplun, said, “Eknath Shinde is a mass leader and everyone in Sena loves him. We are unhappy that Uddhav saheb had to lose his post but we are happy that a Shiv Sainik like Eknath Shinde has become the chief minister. If so many MLAs are supporting him then he must have been facing some problem. But still, he should have discussed it with Uddhav saheb. It's true that there was a lack of communication between Uddhav saheb and the Sena cadre after he became the chief minister. It was not his fault but of the people around him. There is a coterie around him that doesn't allow anyone to reach out to him. The alliance with the NCP and the Congress was destroying our organisation at the ground level. There were thousands of Shiv Sainiks who were unhappy with it. But they remained silent as they didn’t want to be in conflict with the senior leadership.”

Harish Kerzarkar, a lawyer and political analyst, said, “The decision to make Shinde the chief minister has definitely confused the unhappy cadres of Shiv Sena who were against him. But if he stays the chief minister for at least a year then these disgruntled cadres will start supporting him. The cadres also have aspirations and like to be in power. Some of the cadres may have gone with Thackeray after his emotional exit speech, but now they are confused. It will be difficult, however, for Shinde to get hold of the functionaries of the party as the constitution of the Sena puts all power in the hands of the party chief.”

He continued, “There are 288 officials in Shiv Sena’s Pratinidhi Sabha and nine members in the National Executive. While Shinde will have the support of officials in the constituencies of the MLAs of his faction, the majority of the officials are from Mumbai and it won’t be easy to get hold of them. But Shinde has taken control of the legislature party and they are going to introduce a new whip. They have said if the Thackeray faction doesn’t consider their whip they might even suspend Aditya Thackrey.”

Political journalist Prasad Kathe said, “Cadres are perplexed and don’t know which side to choose. But presently Shinde is definitely a centre of gravity for the majority of Shiv Sainiks who believe in the ideology of Hindutva. This decision has also helped the BJP to soothe the anger of the Sena cadre who were irked with them. This has confused them.” 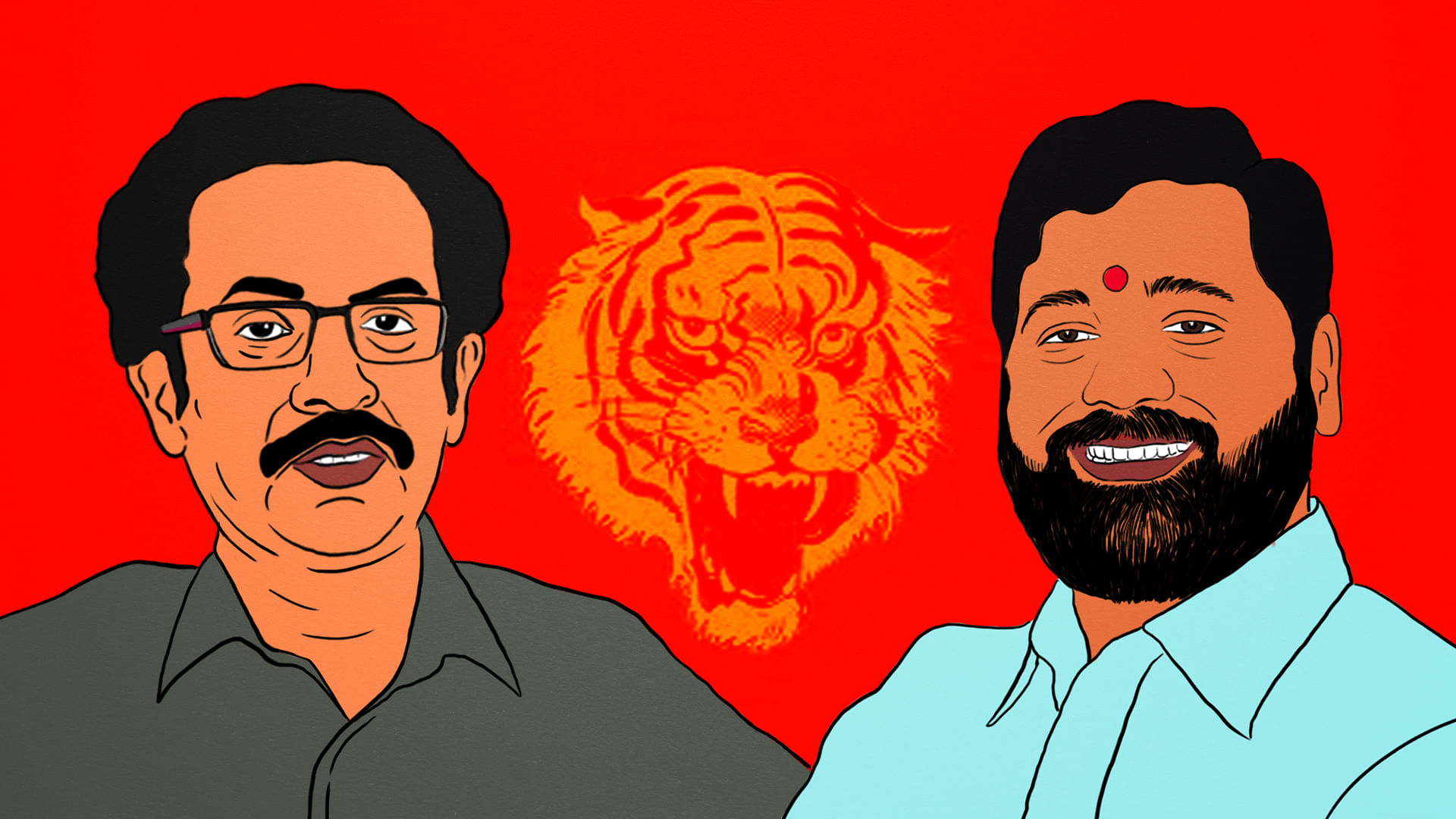