Most reports were low on details, focusing instead on Mamata Banerjee’s appeal for peace.

Hours after the assembly election result was declared in West Bengal, there were reports of nearly a dozen people being killed in incidents of post-poll violence. Three parties – the Trinamool Congress, the Bharatiya Janata Party, and the Indian Secular Front – alleged that their workers were among those killed.

The BJP alleged six casualties, claiming they were killed by “TMC goons”, and that multiple party offices and homes of its supporters were vandalised and set ablaze. It also alleged that its women workers and Nandigram poll winner Suvendu Adhikari’s vehicle were attacked. The saffron party plans to hold day-long dharnas in protest across the country on Wednesday, when Mamata Banerjee will take her oath as chief minister.

On its part, the TMC junked the BJP’s claims, with Banerjee saying it was “spreading lies using old pictures of riots that did not take place in Bengal”. The TMC said four of its party workers were killed. The Indian Secular Front, a Congress-Left ally, said one of its workers died in North 24 Parganas district.

Social media is awash with party workers, journalists and other users tweeting updates and purported videos of the violence, with the BJP and TMC trading charges.

Alarming situation in Nanoor (Birbhum district) with more than a thousand Hindu families out in the fields to escape marauding mobs seeking to take it out against BJP supporters. Reports of molestation or worse of women. @AmitShah please rush some security to the area.

BJP IT cell could have given trolls some time off after results. All cases on SM are BJP intra-party fights. Three+
factions in Bengal. They hate each other.

To @BJPâs fake troll army busy disseminating a nationwide fake news campaign on how WB is burning. It is not.

Stop the lies. It cost you Bengal. Will cost you India next.

Following the reports of violence, the ministry of home affairs said that it has sought a report from the state government about alleged incidents of “post-election violence against opposition political workers in the state”.

Newslaundry skimmed through the pages of state editions of some English newspapers today to see how they reported on the violence.

The Telegraph, having gained a reputation over the years of being a staunch critic of the Modi government, only managed to give a tiny box of space to the violence on its front page. The box item included Banerjee’s appeal for peace.

Detailed coverage was reserved for page 6, with the main headline reading “Didi calls for peace amid post-poll violence”.

The newspaper detailed the BJP’s claims: that five workers were killed by “Trinamool goons” and “suspected TMC activists”, how homes and properties of BJP and CPIM members were vandalised. It carried statements by state BJP chief Dilip Ghosh and CPIM leader Samik Lahiri. Telegraph also mentioned an incident that took place in the Nabagram village, where the mother of a BJP worker was “allegedly hacked to death allegedly by Trinamool-backed goons”.

It also reported about violent clashes that reportedly took place between the TMC and BJP and incidents of arson and ransacking yesterday in five districts of north Bengal.

The daily’s editorial, titled “Third chance”, did caution the TMC chief: “Ms Banerjee must desist from any kind of violent confrontation and intimidation. She must bear in mind that the BJP managed to get a toehold in the state on account of TMC’s willingness to embrace the culture of political intimidation.”

One of India’s oldest English newspapers, the Statesman did not report on the violence on its front page. Page 3 had a short report on BJP chief Dilip Ghosh’s appeal to stop the violence. The only details of alleged attacks on BJP workers were in the statements attributed to Ghosh.

The newspaper also carried a single-column report on four deaths, of which three were allegedly associated with the TMC, in Bengal’s East Burdwan district.

The Kolkata edition of the Indian Express reported on the violence on page 1. The report included the BJP’s allegations of its workers being murdered, the TMC’s response, and the home ministry seeking a report from the state government.

Express interviewed Biswajit Sarkar, the brother of a BJP worker allegedly killed in the violence. Sarkar confirmed his brother’s death. The paper also mentioned Mamata Banerjee’s appeal for peace and the charges traded by TMC and BJP leaders on Twitter.

The paper, in its editorial column, stated that “cracking down on violence against rivals” is the first task that Banerjee should take up as chief minister, adding that West Bengal could “ill-afford” a law and order crisis when the government’s energies should be focused on battling the pandemic. “Banerjee must use her reinforced political capital to lay down the red lines,” it read.

The paper’s Kolkata edition carried a brief story on its front page about the home ministry seeking a report on the violence, without details on what exactly had happened. The violence didn’t appear on page 2, which was devoted to other election updates. Page 3 had two reports on the allegations made by the TMC and the BJP.

The report on the BJP had statements from BJP leaders Dilip Ghosh and Kailash Vijayvargiya. Vijayvargiya claimed that the houses of 4,000 BJP workers were ransacked and 100 shops looted. The report mentioned in brief the details of the BJP workers who were allegedly killed.The report on the TMC’s claims was headlined “TMC says 4 of its workers have died; Didi wants peace, focus on pandemic”. The report glossed over the details of the violence, focusing instead on Banerjee’s appeal for peace. The editorial page of the Times of India steered clear of commenting on the clashes.

Eastern Chronicle, which is run by the Assam-based Sankha Group, did not mention the violence on the front page of its Kolkata edition. The top story was Banerjee being sworn in for her third term while the story next to it was about the TMC seeking a recounting of votes in Nandigram.

Stories on the violence appeared on page 3, with the main story headlined “BJP worker shot dead in Sitalkuchi, fear grips”.

“There have been reports of BJP activists being attacked in every assembly constituency in the district since Sunday night,” the report said. “...A number of houses were vandalised and a total of 37 of their supporters were injured.” The report mentioned that a journalist with a local media outlet was also allegedly attacked in Cooch Behar.

Page 3 also had stories on a BJP candidate’s house being “damaged” and how BJP leader Suvendu Adhikari’s car was “attacked by unknown miscreants”. 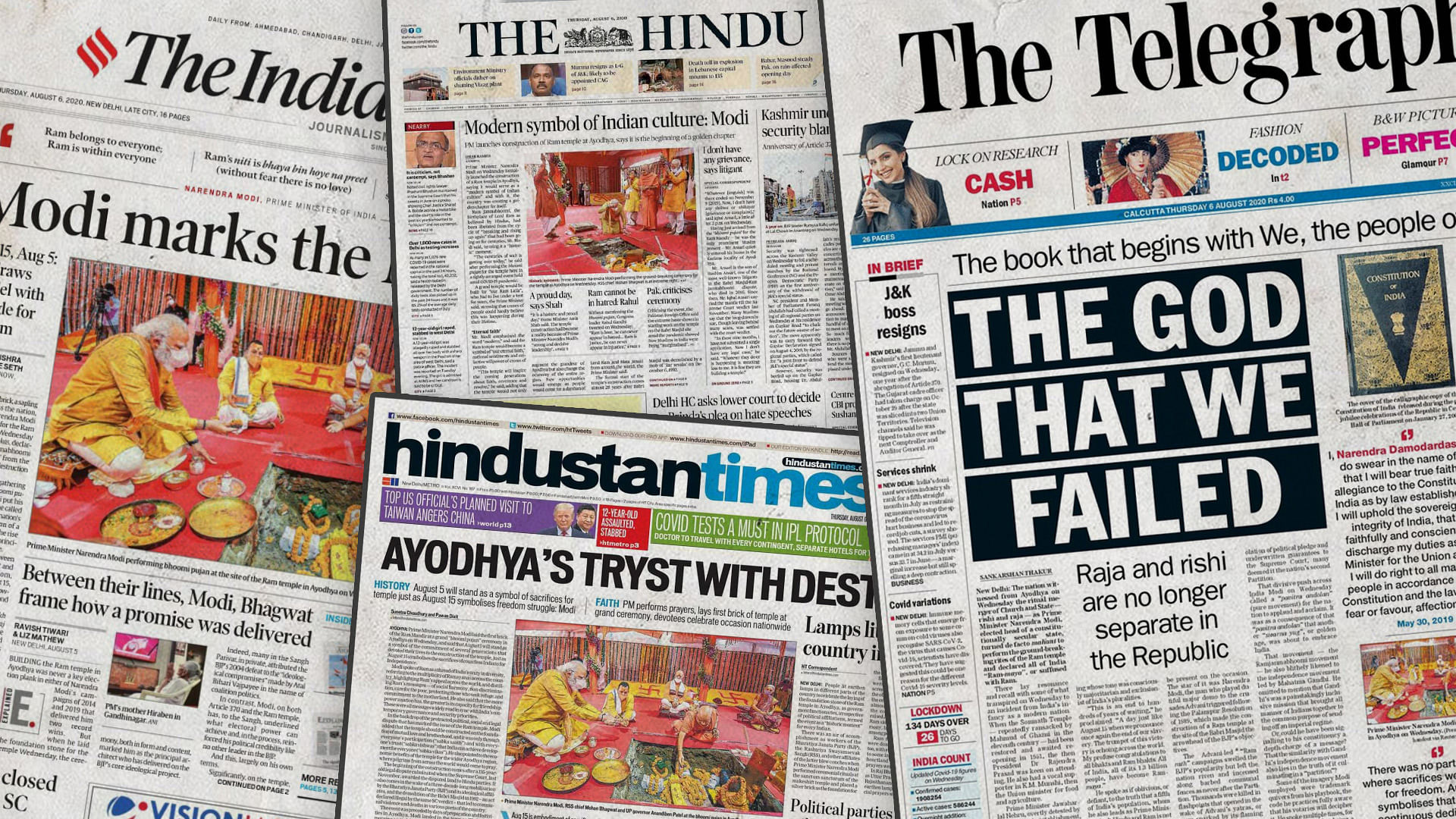 ‘Tryst with destiny’ to ‘the God we failed’: How major newspapers covered #RamMandirBhoomiPujan

‘Sir Ram’: A look at how some Hindi and English newspapers covered the #AyodhyaVerdict