It all began when a Muslim singer sang a Hindu song.

Darul Uloom Deoband, India’s largest Islamic seminary, is back in the headlines for another “fatwa”, reported first by news agency ANI and amplified by sections of the legacy media – ostensibly to manufacture a controversy where none existed.

It all began with a cleric, Asad Qasmi, objecting to a chartbuster Shiv bhajan by former Indian Idol contestant Farmaani Naaz. Farmaani posted her rendition of the song, titled Har Har Shambhu, on her YouTube channel last month.

Qasmi said a Muslim shouldn’t have performed the bhajan as singing and dancing are forbidden in Islam. ANI reported the remarks, calling Qasmi an “ulama of Deoband”.

Hours later, the TV tailspin began about a “dhaarmik sangraam”, or religious struggle, based on a claim that there was a diktat from Deoband, with no clarification that it had nothing to do with the seminary. This despite Farmaani telling several TV channels that there was no such fatwa against her from Deoband and she felt no resistance from her community or from Muslim clerics.

Yet the shows went on, one after the other, only scaling down their pitch after repeated clarifications by Farmaani.

Here’s another catch. While several TV channels aired visuals of Darul Uloom Deoband, neither has the seminary issued a fatwa on Farmaani nor is Qasmi associated with it. In fact, whenever it issues a fatwa or Islamic opinion, it is only in response to queries, and does so either through its website or press releases.

Qasmi runs a madarsa called the Jamia Shaikhul Hind in Deoband, according to his statements in interviews on the madarsa’s YouTube account. In 2019, he told Alt News that he is a former student of Darul Uloom Deoband. His madarsa’s YouTube channel has clips of TV broadcasts featuring him, including on India Today and Aaj Tak.

This is not the first time that his statements have been portrayed as views of the Muslim clergy or of Darul Uloom Deoband in dogwhistle campaigns. But more on that later.

First, let’s first take a look at how the media did not yield in its campaign despite Farmaani’s words.

On ABP News, Rubika Liyaquat, on her primetime show Hunkaar, declared that all those who love the Har Har Shambhu track are pitched against “those” attacking Farmaani Naaz. “Farmaani ki Shiv bhakti se kaun pareshan” was the headline of her show, which included a panel discussion.

The anchor asked the singer how she felt after learning that her song bothered clerics. Farmaani told Rubika there was no fatwa from Deoband and she had received support from “good clerics”. Liyaquat was quick to scale down the show’s pitch from the plural to the singular, telling Farmaani that “you heard” what this one “janaab-e-aali” had to say. Though the ticker continued to ask why clerics, in the plural, were offended.

The network’s other mutations waded into the controversy as well. ABP Ganga ran a show headlined “Fanatic attack on an artist’s musical discipline”.

On a News Nation “super exclusive”, the anchor asked if only the Har Har Shambhu track was enough for clerics to issue a fatwa, with a back shot of a skullcap-donning man in the background as an ample visual symbol for those who opposed the singer. The special segment featured a reporter – sitting with Farmaani and her singer brother Farmaan in their studio – asking about a “farmaan”, or diktat, from Darul Uloom Deoband.

Farmaani said she has no idea where this “false rumour” came from and that she felt completely at ease with her community in her village Mohammadpur in Uttar Pradesh’s Muzaffarnagar. “Poor ulama have nothing to do with this,” she said, adding that she faced no problem anywhere. The reporter then concluded Farmaani had the “blessings of Maa Saraswati” in the land of Ganga-Jamuni tehzeeb.

A similar script played out on Zee News, on a show headlined “Shambhu ka jaykaara, nafrat ka paara”. The anchor said “a few ulama and maulana were offended” by a song which was so catchy that “it shouldn’t be seen as religious”. As she asked Farmaani why there were objections to the track, the singer clarified there were none and her Muslim-dominated village supported her.

But the anchor asked the question again, pushing the fatwa angle and asking what the disagreement was about. Farmaani chose to respond by saying she was an artist catering to no single religion. The anchor later asked if Farmaani, as a Muslim, was aware of sentiments related to Hindu deities and if she caters to the same through her music, but the singer said her songs were liked by all, irrespective of creed.

Meanwhile, on Republic Bharat, Shazia Nizar, on her show 10 Me Hai Dum, described Qasmi as a Deoband cleric, with visuals from the Darul Uloom, and asked why “some ulama” were uneasy with the track. “Why have the fanatics opened a front?” she asked.

On India TV, anchor Jyotsana Paatni introduced viewers to the “big news” about the alleged fatwa by “fanatics”, without mentioning who issued it. The anchor went on to claim that Muslim clerics are petrified by the popularity of the song. News18 also failed to specify who all these “ulama” from Deoband were.

The news was amplified beyond TV. Amar Ujala reported that the song had left clerics fuming.

Many of these reports notably failed to attribute this “hatred” and “sangraam” to Qasmi, who is not a novel character for hate programming on television.

In July 2019, when Trinamool Congress MP Nusrat Jahan took oath wearing a sindoor and mangalsutra, Qasmi appeared on ABP to say a Muslim can marry only a Muslim and that “it’s pointless to talk about the matter” since Nusrat has married someone “from the Jain community”. But this was picked up by various channels and sections of the print media which sought reactions from Hindutva firebrands to manufacture a controversy about a “regressive” Deoband – with a fair share of dogwhistling.

It didn't stop there.

In October that year, when Nusrat celebrated Durga Puja with her then husband Nikhil Jain in Kolkata, news headlines raged about “Darul Uloom Deoband cleric” Qasmi targeting the MP for celebrating a Hindu festival. Alt News had reported that this was a syndicated PTI feed, amplified by a wide array of broadcast and print media outlets, with their own personal twist to the tale.

In 2018, Alt News had carried an investigation on how television media aired shows based on fake fatwas and false quotes. 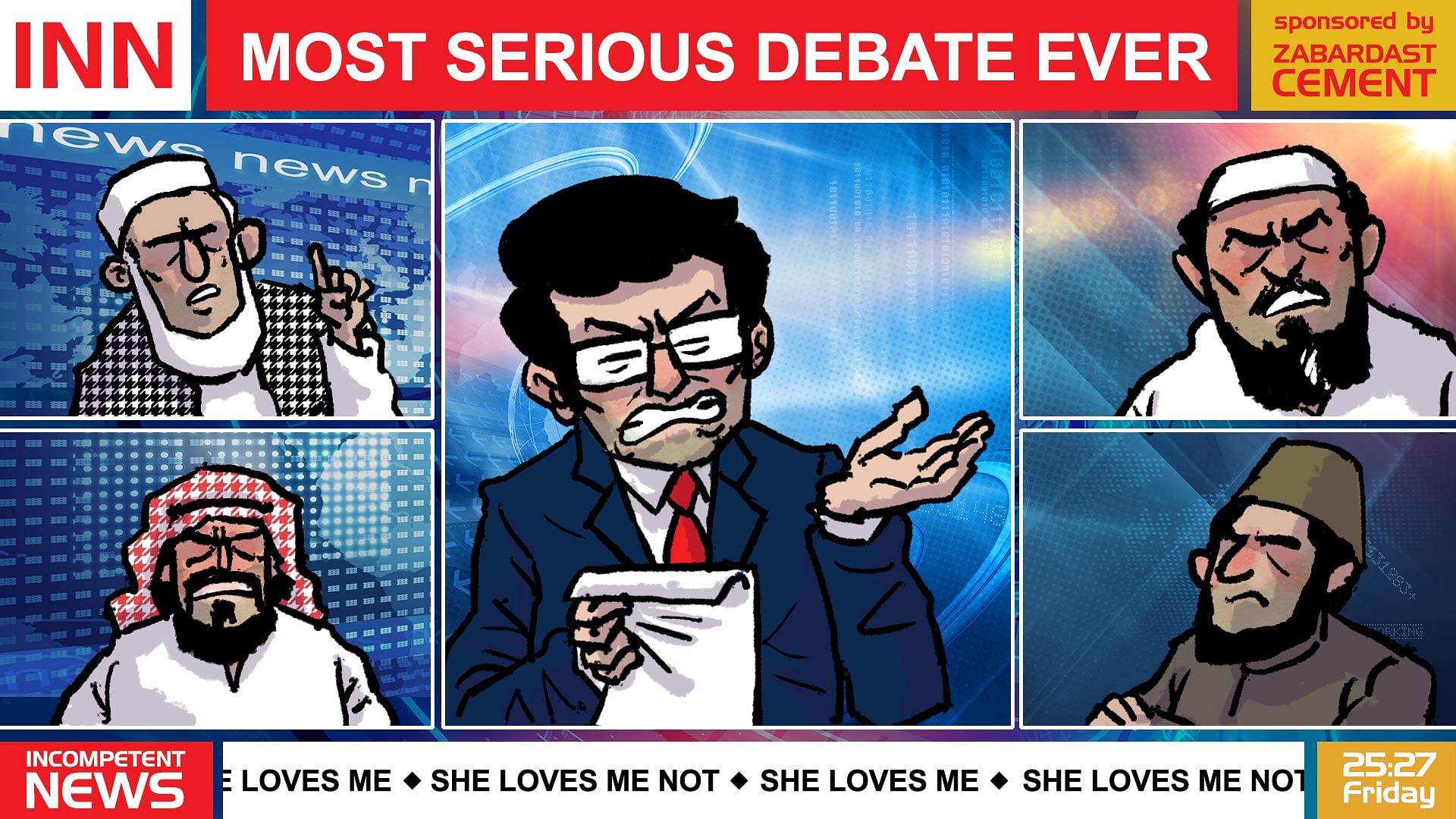 Who is that ‘Muslim voice’ on your TV? A charlatan likely