For Rs 8 lakh, you can be an ‘influential leader’ on India Today, Economic Times

Are you a clueless CEO with zero influence and no media cred? Worry not. News organisations are selling airtime to vanity awards. GST and disclaimers applicable.

The smallest font on the page says “confidential & proprietary information”; the largest says “influential leaders of India 2022”. This is the first page of a document drafted by a company called Team Marksmen. It was quietly tucked at the bottom of an email sent to Newslaundry boss Abhinandan Sekhri last week.

“It brings us immense pleasure to inform you that you have been chosen as one of the ‘Influential Leaders of India’,” begins the email. It seems Abhinandan has finally made it. “We would like to articulate your success story through the varied media vehicles like the TV episode on India Today and print coverage in The Economic Times pull-out (Pan India Edition)”.

So India Today and the Times group will give Abhinandan an award? So far they’ve only given him court hearings. Perhaps this is a truce, an olive branch, or, as our foreign minister puts it, a cessation of hostilities.

The email invites him to a “celebratory event” at the Sahara Star hotel in Mumbai on September 30, for the second edition of the event.

India Today is the media partner of the event. The first edition last year had the News18 group as the partner.

Team Marksmen is a Mumbai-based company whose website’s ‘About Us’ tells us practically nothing in 250 words. Its mission, it declares, is to help “organisations and leaders from across sectors create impactful change that matters”. It has “an array of bespoke and proprietary industry-centric knowledge platforms” and helps “senior industry decision makers navigate through issues of critical importance”. No details, of course. Good ol’ corporate jargon.

Back to more important matters, this year’s event will feature Katrina Kaif. An itinerary attached with the email also says the leaders will discuss carbon emissions and women at work. Katrina will be present as the co-founder of the brand Kay Beauty.

Sounds nice – an event that not only calls you an “influential leader” but also helps you create change. Feminism and environmentalism tick the right boxes, and, of course, there’s Katrina.

Too good to be true, perhaps? Yes. The catch is in the “private and confidential” document that Team Marksmen sent in their email: their awards are up for sale. If you pay between Rs 4 lakh and Rs 23 lakh, the email explains, one would be “honoured” as an “influential leader of India”.

A social media post by the company last month said the awards would “honour” those “who have constantly instilled a sense of purpose in their employees and led from the front”. Nope, they are for those who pay Team Marksmen.

The offer comes in four slabs. For Rs 4 lakh, you can have a “mention of the leader’s name in the press release on Business World, Fortune India, Business Standard, etc.”

Business World is jointly owned by media entrepreneur Anurag Batra and the Kapoor family which founded YES Bank. Fortune India is published in India by the RP-Sanjiv Goenka group.

If you shell out Rs 14 lakh – the costliest slab – you can deliver a “keynote address” or be part of a “fireside chat/panel discussion” at the event. You will also get an “exclusive 3 minutes interview” in the “post event India Today TV episode of ‘Influential Leaders of India 2022’”. What more could an influential leader desire?

In the Rs 8 lakh slab, the interview will only last a minute. It can go on for another minute, however, if you dish out Rs 11 lakh.

An executive at Team Marksmen told Newslaundry that the interview would be broadcast on India Today on a Saturday between 3 pm and 5 pm.

The slab also includes an “exclusive 400 sq cm feature interview” in “ET Special Feature Pull-out” along with an “800 words interview” in an “article” on BusinessWorld.com, the digital property of Business World.

And finally there’s an “optional, add-on television deliverable”. For another Rs 9 lakh, Team Marksmen offers an “exclusive storyboard” of 10 to 11 minutes on “India Today TV episode” that can be done at “client locations in selected cities”. Here, one can advertise their “new products, services, campaigns”; have the CMO or the CFO of the organisation interviewed – Mr Sekhri doesn’t even have one – or “turn the spotlight on inception, milestones, leadership, founders, etc”.

The Team Marksmen executive said that the company’s media partners – especially India Today and Economic Times – sold airtime and print space to them for the event’s coverage. The executive refused to reveal the exact amount charged by the news channel.

Not that India Today keeps this a secret. Last month, Team Marksmen arranged a similar event for India’s “most trusted brands” with India Today as media partner. The show was broadcast on India Today on August 27 and the TV channel carried a disclaimer: “The following program is sponsor funded and the views/opinions expressed therein are not necessarily those of TV TODAY Network Ltd.”

In 2021, when the first edition of the ‘influential leaders of India’ was broadcast on CNN-News18, the channel appears to have not carried any disclaimer like India Today. It’s not clear if the 2021 edition of the awards were vanity awards too. News18.com did publish a post on the event that ended with, “this is a partner post”.

We wanted to know if India Today knew that it was selling airtime to a company that sold false honour and prestige to India Inc. Perhaps the news channel did not notice the awards were bogus because of its “consistent focus on journalistic and editorial excellence”.

A Times group spokesperson told Newslaundry that the event’s coverage is being handled by the Economic Times’s advertorial vertical and not the newspaper. “This event, to the best of my knowledge, is being organised by an events company of the group, Times Strategic Solutions Ltd, also known as ET Edge,” the group said. “The coverage etc that’s being talked about is most likely part of Advertorial & Featured Products pull-outs and the main ET newspaper does not carry any paid coverage.”

After this story was published, Times Strategic Solutions Ltd wrote to Newslaundry: "This is to inform you that ET Edge is no where related to the event named 'Influential Leader' being referred in your article."

We wrote to India Today and Business World as well. This story will be updated if they respond.

Back to Team Marksmen. In their top-secret document, the money Mr Sekhri is expected to shell out is described as an “investment”. Naively, I asked their executive what exactly Mr Sekhri might be investing in. The executive clarified that “investment” simply meant the money one had to pay their company for the award: a 100 percent advance – excluding GST – followed by a contract between the two parties.

“You’re essentially paying for the visibility and not paying us,” the executive said. “You’re paying for appearing in the Economic Times or India Today or in the digital portals where the press release and the articles are going to be published.”

Team Marksmen had another subterfuge up its sleeve. The executive added that the contract would be designed in “a fashion that it doesn’t look like you’re paying for the recognition but for media visibility”.

From what we’ve heard, Mr Sekhri has no plans to sign up for the company’s “honour” and “recognition” this year. It is likely he can’t afford it. But for India Inc executives who need the huff and puff of vanity awards to decorate their egos and brands, Team Marksmen fills a crying need. It also fills the coffers of India Today. We can only hope that it makes up for the dwindling TV ratings.

The story has been updated with a comment from ET Edge. Unicorn in the room: What the Uber-Times Internet story tells us about the business of media 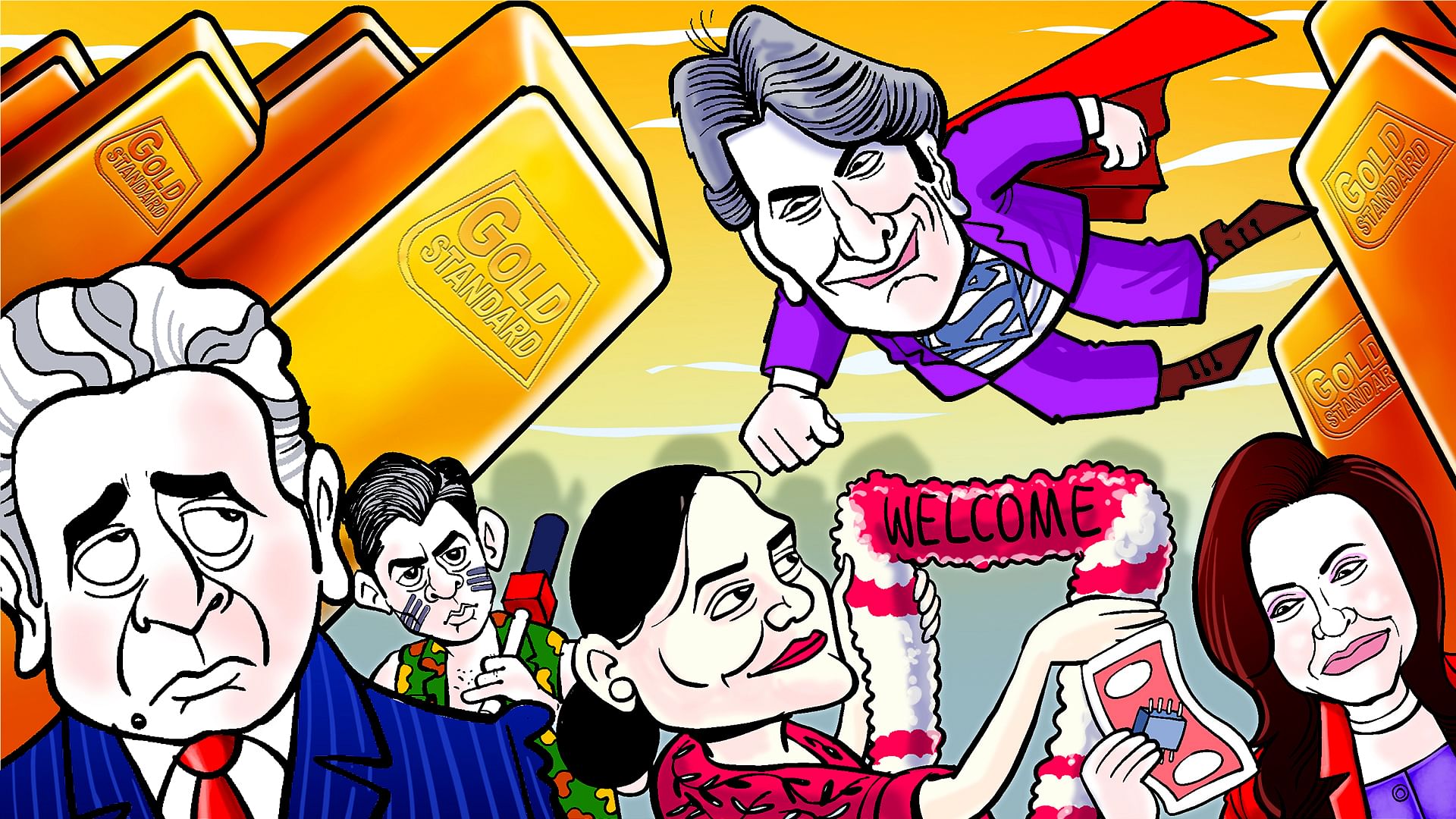