Who Owns Your Media: Jagran Group and the story of India’s most read daily

“Puran Chandraji was a freedom fighter, revolutionary, journalist and an entrepreneur...He chose the path of journalism to serve the people of India.”

This is what Dr Manmohan Singh said in 2012 while releasing a postage stamp honouring Puran Chandra Gupta, founder of the Jagran group – best known for Dainik Jagran. Gupta had also served as chairman of the Press Trust of India for two years.

As per Singh’s speech, Gupta was inspired to start a “nationalist newspaper after Mahatma Gandhi’s civil disobedience movement” and “strongly believed that the countrymen’s aspirations and emotions can be best expressed only through newspapers in Indian languages”. Singh also added that “through [his] life, he encouraged free and fearless journalism.”

If you’re wondering why the founder of a group that’s been accused of leaning right was commemorated in the tenure of the Congress, Sevanti Ninan’s book, Headlines From the Heartland: Reinventing the Hindi Public Sphere, gives us some clues.

In an interview with Ninan, Gupta’s son Yogendra Mohan said that in 1926, when his father would have been 14 years old, he started a group called Hindi Sampraday with his friends. The group initially supported revolutionaries and later Gandhi – Gupta even joined the Congress to work for the independence movement.

In 1937, he started a printing press in Kanpur with his brother. Apart from printing leaflets for the movement, they also took on print jobs to earn a living and later to publish news about the movement they started a weekly called Swatantra in 1939 with Sampraday member Jagdish Chandra Kulsia, who was working with Pratap. A year later, after catching the unfavourable attention of the British, they moved their press to Jhansi. By then, Gupta was regularly travelling to Bombay, Delhi and Madras for the movement’s work and also to secure advertising. He was confident of starting a daily newspaper.

The group has since expanded its footprint to cover most of the northern Hindi-speaking belt, as well as some places in the east, spanning 39 editions. Dainik Jagran is presently India’s most-read daily with a total readership of close to seven crore, as per the results of the Indian Readership Survey Q42019.

In 2002, after the government overturned its 1955 resolution to now permit 26 percent foreign direct investment in print media, the Jagran group was one of the first to get foreign funding. In 2004, Irish businessman Tony O’Reilly’s Independent News & Media acquired a 26 percent stake in Jagran Prakashan Ltd, or JPL – incorporated by Puran Chandra and his sons in 1975 – for around Rs 150 crore. At the time, Pearson Overseas had already acquired 14 percent shareholding in Business Standard.

In 2005, the Jagran group forayed into the television space with the launch of Channel 7, a Hindi news channel that was rechristened IBN7 after Network18 took over. The Jagran group has exited the venture and Network18 has renamed the channel News18 India.

The group then started its marketing and outdoor advertising and media services divisions, Jagran Solutions and Jagran Engage.

In its prospectus, JPL disclosed the history of its business acquisitions within the group over the years, including patent and copyright transfers:

First, in 1975, it acquired publication rights of Dainik Jagran Kanpur and Gorakhpur, Daily Action (Kanpur) as well as a monthly magazine Kanchan Prabha (Kanpur) along with the plant and machinery from partnership firm M/s Jagran Publications.

Then in 1997, JPL acquired the self-generated patent and copyright of the contents from M/s. Jagran Publications. Next in 1984, JPL entered an agreement with partnership firm Daily Jagran (Jhansi) regarding sharing of advertisement revenues from Dainik Jagran’s Jhansi edition that Daily Jagran printed and published; JPL had exclusive rights to sell the advertisement space in national markets. JPL also entered into a similar ad-revenue agreement, in 2000, with Jagran Publications Pvt. Ltd. for the Rewa and Bhopal editions that the latter published. But Jagran Publications would hold exclusive rights to the title ‘Dainik Jagran’ w.r.t. new editions in Madhya Pradesh and Chhattisgarh; any expansion of ‘Dainik Jagran’ in those states would be undertaken on mutually agreed terms between JPL and JPPL. Subsequently, JPL also acquired equity shares in JPPL such that Jagran’s M.P. Group Jagran (lineal descendants of Guru Dev Gupta) and U.P. Group (lineal descendants of Puran Chandra Gupta) would hold shares in the ratio 60:40 with the U.P. group holding 50% voting rights. The agreement was to be in force for at least 25 years.

In 2000, JPL acquired the entire undertaking of Dainik Jagran’s publication from Jagran Limited, which printed and published the Meerut and Dehradun editions. A few years on, JPL entered a deed whereby Jagran Limited was disallowed publishing any newspaper with the same or similar name neither could it publish any Hindi newspaper from Uttar Pradesh, Uttaranchal, Haryana, Bihar, Jharkhand and Punjab.

In 2005, for Rs.1.53 million, JPL acquired its partnership firm Jagran Research Centre, in which it already had 89% shareholding and the same year Jagran Prakashan (MPC) Private Limited was incorporated to focus on Dainik Jagran's MP and Chhattisgarh editions; the M.P. Group and U.P. Group would hold share capital in a 50:50 ratio.

But in 2007, only a year after JPL got listed, Madan Mohan Gupta, belonging to the MP group, filed a civil suit with a few others against Jagran Prakashan in the Delhi High Court, stating that the trademark Dainik Jagran was owned by the lineal descendents of JC Arya, PC Gupta and GD Gupta and not by Jagran Prakashan alone, based on the Provisional Partition (Family Settlement) dated June 12, 1951 and an additional agreement dated January 10, 1976. They even applied for an injunction seeking an ad-interim restraint order against Jagran Prakashan from unauthorisedly using the Dainik Jagran trade name/trademark.

In fact, Sanjiv Mohan Gupta, who belongs to the GD Gupta family and is director of Jagran Publications Private Ltd, reportedly wrote to the Foreign Investment Promotion Board to reject Jagran Media Network Investment Pvt. Ltd’s proposal to transfer shareholding to Blackstone. JMNIPL is Jagran Prakashan’s holding company. After Independent News & Media sold its stake in JPL in 2010, the PC Gupta family had transferred its entire shareholding to JMNIPL and Blackstone GPV Capital Partners invested Rs 255 crore in it.

While the case is still in court, JPL set out to expand with mergers and acquisitions.

The coronavirus pandemic and the economic slowdown have pushed India’s news industry into a crisis. Journalists, more than ever, need your support. You can support independent media by paying to keep news free.

JPL first acquired Mid-Day Infomedia Ltd, the print business of Mid-Day Multimedia Ltd – known for its Mumbai-based afternoon daily Mid-Day and owned by the Ansaris, in 2010. In this cashless deal, for every seven shares of Mid-Day Infomedia Ltd, its shareholders received two shares of JPL. The idea was to enter the English media space; at the time, Mid-Day had editions in Mumbai, Pune, Bengaluru and Delhi.

Finally, in 2015, the group forayed into radio when it acquired Music Broadcast Private Ltd that operated Radio City. MBPL at the time had a revenue base of Rs 209.4 crore and growth of close to 30 percent.

Then there’s I Next, a bilingual morning compact newspaper targeting the 18-35 age group from SEC A, B1 and spanning 13 editions in mini-metros of north India. City Plus is JPL’s weekly English tabloid which has editions in three cities. There are publications it acquired from Mid-Day Infomedia – namely Mid-Day, Sunday Mid-Day, Mid-Day (Gujarati), the Urdu newspaper Inquilab that has editions in seven cities, and Nai Dunia that circulates in four cities.

In the years since the group took over Radio City, the radio channel has expanded from 20 FM stations in seven states to a presence in 39 cities.

Its digital division, Jagran New Media, largely comprises the online extensions of its existing properties, apart from herzindagi.com, vishvasnews.com and onlymyhealth.com. It also has apps for podcasts, current affairs and some of its properties. Jagran International markets JPL’s products outside India.

As we’ve seen, the bulk of the group’s media business today lies with Jagran Prakashan Limited.

The company has been led by Puran Chandra and then his six sons. After his demise, Puran Chandra’s eldest son Narendra Mohan, who actively campaigned for FDI in print media, took over. He was followed by Yogendra Mohan, known for his significant contributions to the development of arts and culture. Yogendra Mohan was also the driving force behind Kanpur’s Lakshmi Devi Lalit Kala Academy.

At present, Mahendra Mohan is the chairman and managing director of the group. PC Gupta’s other sons – Devendra Mohan, Dhirendra Mohan and Shailendra Mohan – are all whole-time directors of JPL.

The next generation of the family has also joined the group. Narendra Mohan’s eldest son, Sanjay is currently CEO, whole-time director and editor-in-chief. Narendra Mohan’s younger son, as well as the children of the other five brothers, are directors.

JPL’s holding company, Jagran Media Network Investment Private Ltd, owns 68.56 percent of its shares. VRSM Enterprises LLP, started by Mahendra Mohan and his son, is also part of the promoter group and owns 0.19 percent. Along with individual shares of the family members, the promoters and promoter group have a 69.41 percent stake in total.

The remaining 30.59 percent is held by the public. Among the public shareholders HDFC Trustee Company Ltd stands out with a stake of 9.62 percent. There’s also significant shareholding spread across NRIs and corporations.

The family has also held, and still holds, important positions in several industry bodies. Both Mahendra Mohan Gupta (1989-1990) and Sailesh Gupta (2019-2020) have been presidents of the Indian Newspaper Society. Mahendra Mohan is presently chairman of INS’s newspaper committee and on the board of the Press Trust of India. Sailesh is on the board of the Audit Bureau of Circulations, India.

Among its directors, prominent names include Anuj Puri, former chairman and country head of Jones Lang LaSalle; Dilip Cherian, founder of PR agency Perfect Relations; Jayant Davar, a member of the governing council of IIM Amritsar; Ravi Sardana, former executive vice-president of ICICI Securities Ltd; Shailendra Swarup, who is a director at GFL, Inox Infrastructure and several other industries; and Shashidhar Sinha, CEO of IPG Mediabrands India and director at Audit Bureau of Circulations, among others.

The family’s association with politics has continued as well. Although Puran Chandra left the Congress after independence, the family never stepped away from politics. His younger brother GD Gupta served two terms as a Rajya Sabha MP from the Congress.

Narendra Mohan was a BJP Rajya Sabha MP from Uttarakhand; when he passed away in 2002, LK Advani had lamented the death of a “personal friend”. The government also issued a stamp to commemorate him in 2003, nine years before a stamp was issued for Puran Chandra.

Mahendra Mohan was also a Rajya Sabha MP, elected from Uttar Pradesh for the Samajwadi Party in 2006.

The other operating income is likely to include revenue from its marketing services, as JPL’s financial statements state that the other activities of the company comprise outdoor advertising business, event management, activation business, and digital businesses. The other operating income also took a hit due to Covid, going from Rs 120 crore in 2020 to Rs 56.65 crore in 2021. But it saw a good recovery with revenues bouncing back to Rs 98 crore in 2022. Moreover, from a loss of Rs 10 crore in FY 2021, it’s shown a profit of Rs 2.5 crore in FY 2022.

At the time of publishing, the market cap of Jagran Prakashan Limited was Rs 1,724 crore. 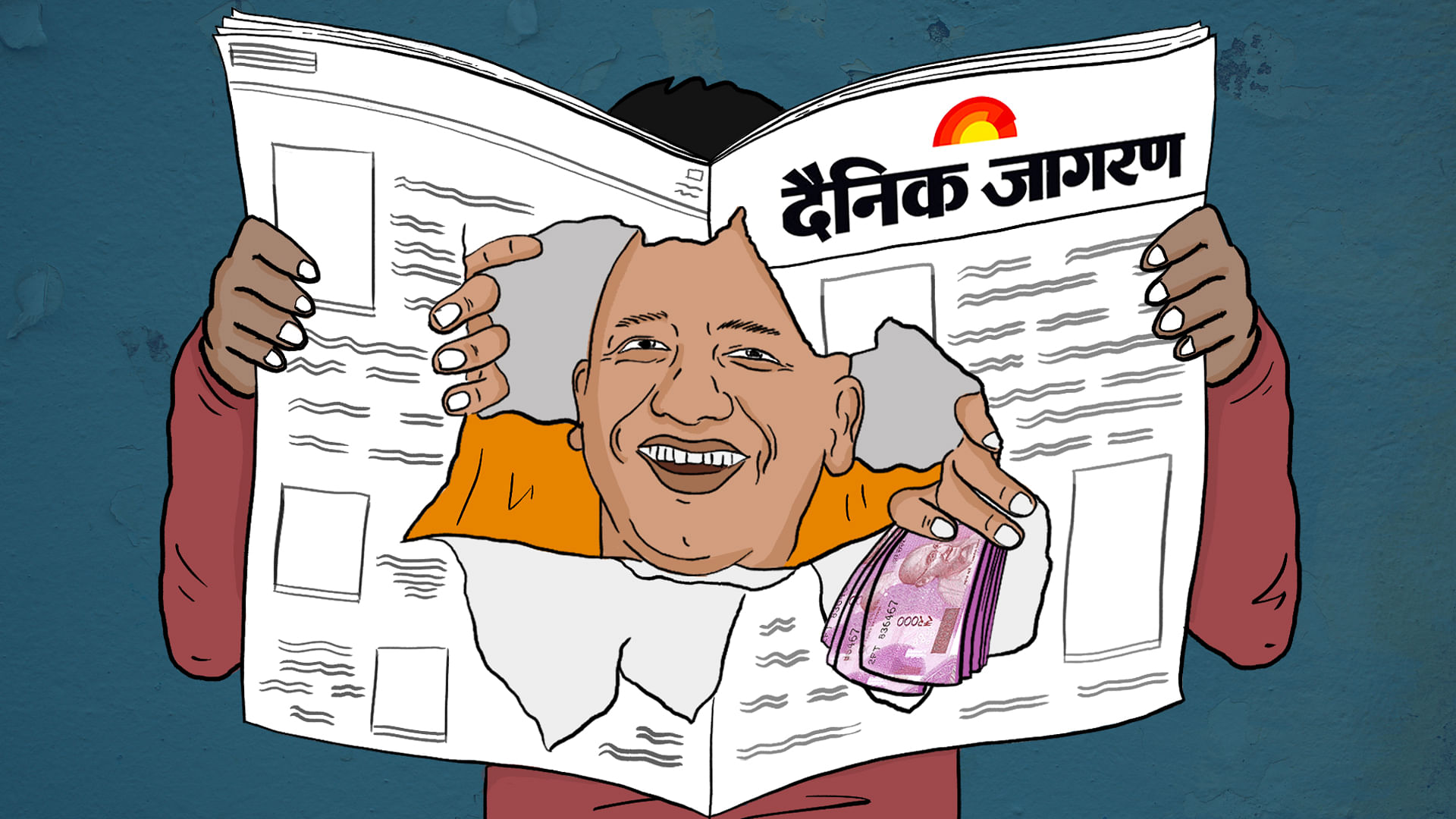