Why are they so aggressive, even abusive, on TV?

As endless loops of verbal conflicts play out on TV screens, you might have noticed a few essential ingredients of a TRP-grabbing formula: a communal frame, a bigoted anchor, a Hindutva proponent, an irritable maulana, plenty of snide remarks and whataboutery.

Increasingly relying on tailspin debates for revenue, India’s TV news channels continue to project obscure maulanas as Muslim intellectuals, representatives and religious leaders. But who are they, how do they make their living, why do they go on TV? Newslaundry met a few of them.

He dons several hats. Sarwar was a Muslim cleric on hand when ABP debated the Gyanvapi row, but he is a Muslim scholar on News Nation’s Kya Kehta Hai Islam, and the All India United Muslim Front’s national spokesperson on Aaj Tak’s Halla Bol.

On a recent episode of News Nation, as an ex-Muslim repeatedly referred to him as a maulana, Sarwar said, “I am no maulana. Main TV waala maulana hoon.” I’m a TV maulana.

Sarwar tells Newslaundry that he is neither a “certified maulana” nor has he ever “described myself as a maulana or a Muslim religious leader” as he has only pursued a maulvi course from the Bihar madrasa education board. He is a founding member of the AIUMF and claims to have objected several times to any attempt to term him a Muslim religious leader or maulana on television.

He claims to be a social activist, hailing from Begusarai in Bihar and now living in Delhi’s Batla House with his family, their accommodation provided by a “well wisher”. He also runs a small unit manufacturing wallets and belts in Kirari, and operates a YouTube channel called Desh Ki Sachchai.

He tells Newslaundry that he once saw an anchor signal another “maulana” to play furious on screen, and the latter abided. However, he refuses to name the anchor, channel and the alleged maulana. “My relations are getting spoiled because of my outspokenness,” he said. “If I name people, this will get worse.”

Sarwar contested the 2005 assembly election in Periya Bariyarpur, Begusarai, but lost. He was the Bihar chief of former MP Udit Raj's Indian Justice Party, but he joined the BSP in 2009 as he did not get the respect he “deserved” in his previous party. He then went on to become the BSP’s Delhi general secretary before quitting the party in 2014 – working “as a painter” to make ends meet.

"Some panellists are handed out envelopes by channels with around Rs 2,000, but I have never taken this amount,” he said. “I go to debates on my Splendor bike. Sometimes, the channels send a vehicle.”

Amid the Nizamuddin Markaz Covid saga, Sarwar was accused of sheltering 15 Tablighi Jamaat members, and Sudhir Chaudhary, then of Zee News, declared him an enemy of society.

The 33-year-old has been appearing on TV debates since 2018, but despite having previously been a member of two political parties, TV channels have mostly projected him as a Muslim thinker or scholar.

From Jharkhand’s Giridih, he now lives in Delhi’s Jamia Nagar and operates real estate and food businesses in the area. He is a biotechnology graduate from Bangalore University and is now pursuing a postdoctoral degree from Jamia Millia Islamia, where he has also done a one-year diploma in Islamic studies.

But he is no scholar of Islamic theology and doesn’t claim to be one. He is, however, ostensibly favoured by TV channels for his abusive remarks and anti-Modi position.

“My father was associated with Tablighi Jamaat, so I also joined it. During my PhD from Jamia, I formed India's Muslim Foundation in 2016,” he said. “And I became the Delhi state president of Rashtriya Janata Dal in 2017.”

Jamai says he delivered a speech during an event at the India Islamic Center in Delhi when he was part of the RJD. “After my speech, people from the Muslim community came up to me and advised me to go for TV debates,” he claimed. “People who go there are not able to represent Muslims properly because of which the community gets a bad name.”

However, he didn’t appear on television debates on behalf of RJD but the IMF, starting out on Aaj Tak in 2018. “Within the first three or four months, I was invited to primetime shows of all the mainstream channels."

Ahead of the Bihar election in 2020, Jamai met Pappu Yadav and subsequently left the RJD to join his Jan Adhikar Party Loktantrik, where he was told to look after the Seemanchal region. He resigned a few months ago.

“When the survey team reaches a madrasa, it should be welcomed with shoes and slippers,” he recently said about the Adityanath government’s decision to audit Muslim seminaries in Uttar Pradesh, triggering a TV row, a hint why he remains popular with news channels even after 10 years on the debate circut.

Founder of the All India Imam Association and one of the most controversial Muslim clerics on Indian TV, Rashidi runs a Haj tour business and resides in a room above a mosque in Delhi’s Paharganj where he leads the daily prayers.

“Earlier TV channels used to pay money to participate in debates but now they don’t because the competition in the market has increased. TV channels didn’t have much of a choice earlier so we were called and paid, but now they have created many maulanas. People called to these studios with beards and skullcaps don’t even understand questions. They only shake their heads. Even when they speak, they only talk rubbish. Only DD News pays now, private channels don’t.”

Talking about television’s verbal duels, Rashidi says, “A code word is used to signal others to get aggressive during debates. Once, during a debate, an anchor signalled a maulana sitting next to me. And as soon as he got the hint, maulana sahab lost it. So much so that he stood up, started shouting, and as soon as there was a break, the maulana asked the anchor, ‘Was it fine?’”

Rashidi alleges audiences are given their questions in advance on paper by channels and told who these questions should be addressed to. “Sometimes provocative questions are asked on purpose. If someone starts giving an appropriate reply, the audience starts hooting.”

Hailing from UP’s Saharanpur, Rashidi came to Delhi in 1993 after finishing theological training at a seminary in Gango area in the district. He tried to publish two papers – Almi Inquilab and Imamat – which shut down after a short run, and he subsequently formed the imam association in 1994.

Maulana Suhaib Qasmi aka the nationalist

The nameplate outside his flat in Delhi describes him as a “senior leader” of the BJP, and Qasmi is a national convener of the RSS Muslim Rashtriya Manch. However, TV channels only present him as a Muslim scholar and president of Jamaat-e-Ulema Hind – an organisation he formed in 2005. Perhaps, to paint his support to the government’s policies and opposition to “Islamist” and “orthodox” Muslims as an educated, unbiased Muslim position.

“We are bal swayamsevaks. My father was in the Jana Sangh. My father and I have been founding members of the Muslim Rashtriya Manch. I have played an important role in the BJP organisation in Kerala, Kashmir, Assam and Uttar Pradesh.”

Qasmi says the Jamaat-e-Ulema Hind, whose office is in Delhi’s Daryaganj, is an organisation of “nationalist Muslims” and each member is “also part of the BJP and RSS”. “There are more than five lakh members in the organisation.”

Qasmi amplifies content promoting the BJP on social media and thinks Muslims who oppose Prime Minister Narendra Modi are misguided. He keeps cursing the Muslim community on issues close to the Hindutva movement such as love “jihad”, hijab, Gyanvapi masjid, and CAA-NRC. The nationalist Muslim also thinks that incidents such as lynchings are minor episodes and “such incidents keep happening in such a big country”.

This story was originally published on Newslaundry Hindi. 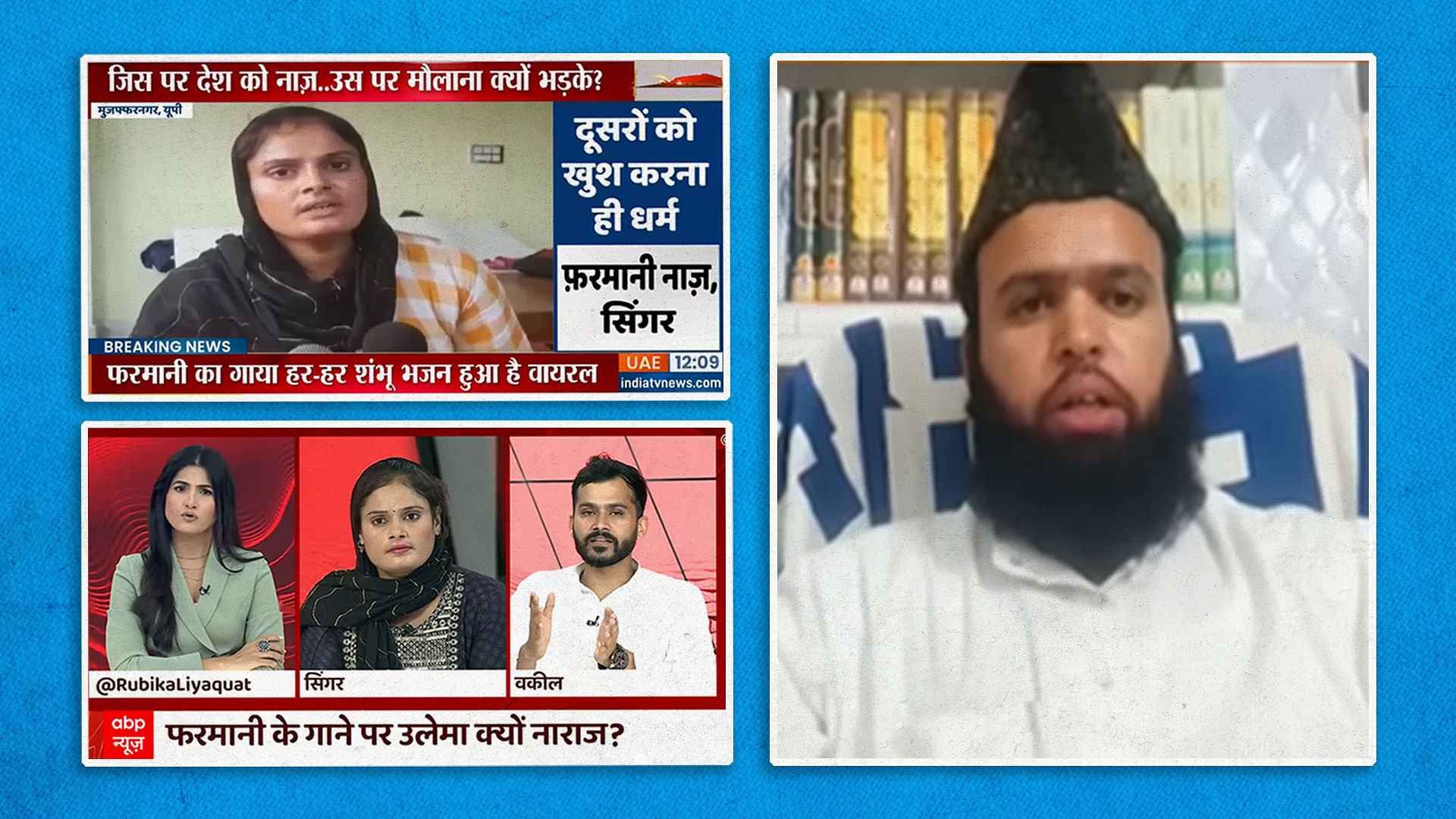