The journalist as a criminal: Meet Pune’s extortionist newsmen

The list is lengthening of journalists in the city booked for blackmail and extortion.

At around 8.30 pm on August 23, Dr Ashok Bhondwe, a veterinarian, was busy treating stray pets at his clinic in Shivaji Nagar in Pune when a woman barged in and started screaming that the doctor had killed her dog. She was accompanied by a middle-aged man, wearing a formal black blazer and what looked like a press card on a lanyard, who identified himself as a journalist and started filming the argument with a cellphone.

The journalist compelled Bhondwe to admit on camera that the dog had died because of his treatment and, once the doctor had done so, threatened to release the video online if they weren’t paid Rs 5 lakh.

Bhondwe wouldn’t be extorted and, after about two months of harassment and blackmail by the journalist and his accomplice, filed a police complaint.

The police identified the journalist as Sandip Shingote, 38, who runs a YouTube channel, News 24 Hours, and his accomplice as Nutan Parkhe, 47, a self-proclaimed activist. The police set a trap and caught them red-handed taking the money from Bhondwe, but let them go because they were apprehended under bailable sections.

Shingote is the latest journalist accused of criminal conduct in Pune. In the past two years, the police have booked or arrested at least 10 journalists for blackmail and extortion. Several more are still operating freely, seasoned journalists in the city and police officials told Newslaundry, all on the condition of anonymity. These journalists mostly run small YouTube or Facebook pages – those arrested soon abandoned their “journalism” pages – or work as stringers for prominent media outlets earning Rs 5,000-10,000 a month.

Yet, some of them wield influence in the administration and with the police and allegedly even get “monthly perks” from police stations.

And they are generally brazen in how they operate. Like Shingote.

“They were shouting at the top of their voices when they barged into my clinic,” Bhondwe recalled, referring to the journalist and his accomplice Parkhe. “They were saying that I had injections to the dog that killed it. I tried reasoning with them, but they would not listen and created a scene. The journalist was filming me and forced me to say the dog had died because of my mistake. I later found out that dog had not even been treated at our clinic. After making the video, they demanded Rs 5 lakh. They would make the video public and file a case if I didn’t pay, they said. I was terrified and offered to pay them Rs 50,000, but they said they would take no less than Rs 5 lakh.”

A few days later, Bhondwe alleged, the journalist called and offered to settle for Rs 4 lakh. “He told me if I didn’t submit to his demands my life would be destroyed. I was frustrated and scared and finally went to the police. They laid a trap and caught them red-handed in the act of extortion. But it is unfortunate the police released them the same day.”

It was a similar story when the police arrested Devendra Jain for his alleged involvement in a “land grab and extortion racket”. He was booked under the Maharashtra Control of Organised Crime Act, as were his suspected accomplices, an RTI activist and two suspended policemen. Prior to his arrest, Jain was a regular face at Pune’s police commissionerate. He regularly visited senior officials and was considered to be close to a few of them.

“He would sit in the front at press conferences and ask random and unnecessary questions to make himself familiar with police officials,” a reporter who covers crime for a national daily said of Jain. “He was often seen with a special inspector general of police rank officer. I am not sure if the officer was aware of what Devendra Jain was up to.”

Jain felt so influential that he allegedly even harassed a police official. “We were interrogating a person in a case of weapons possession. Devendra Jain called me and asked not to question that suspect. I told him off and then a senior officer called me and gave me an earful while he was still with me,” the police official recalled. “That wasn’t the only incident. He used to intervene in police work whenever the person involved was close or known to him.”

Jain worked with the Marathi newspaper Pudhari for a short duration between 2019 to early 2020, when he left to set up news portals Pune Crime Patrol and Pune Defence News, both of which are now defunct. He claimed to have worked with India Today, Doordarshan and UNI previously, but that wasn’t true.

“He was totally faking it but not many people realised it,” said a crime reporter with a national daily, who was with Jain in journalist and police WhatsApp groups.

“I have a fertiliser factory. We were running during the Covid lockdown under the Essential Commodities Act and we were following all the guidelines,” said Chandan Shah, a businessman who helped bring Jagtap down. “One day this journalist appeared and said our workers weren’t wearing masks or using sanitiser. I said we are following all the guidelines but, yes, it was possible a few of them had made mistakes in following them. I assured him that I would deal with them strictly. He told me I had to pay him Rs 4-5 lakh or a monthly retainership of Rs 15,000-20,000 or else he would publish bad news about the factory.”

Shah refused to pay, and complained to the Saswad police. “We registered a complaint of blackmailing and extortion against the journalist,” recalled Dagdu Hake, then head of the Saswad police station. Nilesh Jagtap was arrested in 2020 and booked for extortion. He’s currently out on bail.

“These so-called journalists are simply blackmailers. They launch a YouTube channel, get a mike and, instead of reporting on issues of public concern or exposing corruption, they target people for extortion. This is alarmingly common in Pune. The authorities should really think about tackling such blackmailer journalists.”

Nilesh Jagtap wasn’t the only “blackmailer journalist” that Hake had to deal with in Saswad. “Pradeep Jagtap. He ran a YouTube page by the name of Purandar News. He blackmailed a hotel owner and real estate agent called Prashant Vandhekar. We had filed a case against Vandhekar over irregularities in a land deal. Jagtap got to know about the case and tried to blackmail Vandhekar, saying that he would publish a report against him unless he was paid Rs 5 lakh.”

Vandhekar went to the police and they arrested the journalist, who is now out on bail.

In August 2021, the Pune police arrested three journalists for attempting to extort money from a gas agency owned by BJP leader and former journalist Amar Sable. Maruti Bansode, Wasim Shaikh and Moin Chaudhary had demanded Rs 2 lakh lump sum and a monthly payment of Rs 5,000 from the agency’s manager Yogesh Shinde after filming his customers carrying cylinders in their private vehicles and claiming that it was against the rules. Bansode edited a digital news platform Samiksha Times where Shaikh and Chaudhary were reporters.

Another journalist, Arjun Shirsath, was arrested in September 2021 for threatening and seeking to extort a tobacco trader in Hadapsar. Shirsath was unemployed at the time, having left the Marathi daily Punya Nagri.

“The trader had been paying Arjun Shirsath regularly after he had threatened to publish negative news about his tobacco deals. But he wanted more money. The trader refused, so Arjun Shirsath stopped his goods vehicle and called him demanding Rs 5 lakh,” said a journalist with a Marathi daily who has known Shirsath for years.

Several journalists Newslaundry spoke with pointed out that their “shady” colleagues thrived because they were protected by police officials.

“Cops at almost every police station in the city pay them a monthly hafta to do positive stories about them,” alleged a seasoned journalist with a national daily who has covered the police for over 15 years. “If the cops solve a case, they tell their journalist friends to do a story with their names and photos. The cops also help them get advertisements through their contacts. Many a time when they learn that the police have registered a case against someone with money, they try to blackmail them. They don’t spare policemen even, especially targeting traffic cops. If a traffic cop makes a mistake on duty, they take videos or photos and extort them.”

The hafta, or “paakit” as it’s locally called, is Rs 2,000-3,000 per month, said another crime reporter with a local media house on the condition of anonymity.

A public relations official for the Pune police acknowledged that such journalists had become a “nuisance” and that some of them work in cahoots with police.

“On and off we get calls from police stations to verify the credentials of such journalists,” the official said, speaking anonymously because he wasn’t authorised to speak to the media. “Police in Hadapsar, Kondhwa and Bharti Vidyapeeth especially are facing this problem. But yes, some cops do pay them monthly to avoid any negative news against them. Traffic cops are the softest targets. If a few traffic cops are standing and talking, these journalists will take their photos and then blackmail them saying they will write that they were neglecting their duties. At times, they take pictures of traffic cops taking bribes and then blackmail them.

However, Ramnath Pokle, additional commissioner of the Pune police who also handles the force’s public relations department, promised strict action against “anyone doing extortion in the guise of journalism”.

“These fraudsters are easily accessing the police department and using their influence to do blackmail and extortion,” he said. “And genuine journalists are discredited because of them. We are going to start a verification process to deal with these fraud journalists. It’s a problem that needs to be resolved in a timely fashion.”

“Editors and alert citizens can discern one-sided reporting and, sooner or later, such journalists and police officers are exposed,” said Borwankar. “Honest, transparent policing and citizens taking an interest in law enforcement on a sustained basis will ensure factual reporting. So, we must pursue both police reforms and ethical reporting.”

Geeta Seshu, a veteran journalist in the city, was emphatic in demanding action against “blackmailers posing as journalists”. “Aside from action under provisions of the Indian Penal Code, journalist bodies need to be more alert and call out fake journalism more vigorously, whether it’s practised by prominent TV figures or by small fly-by-night operators who go after local victims.” 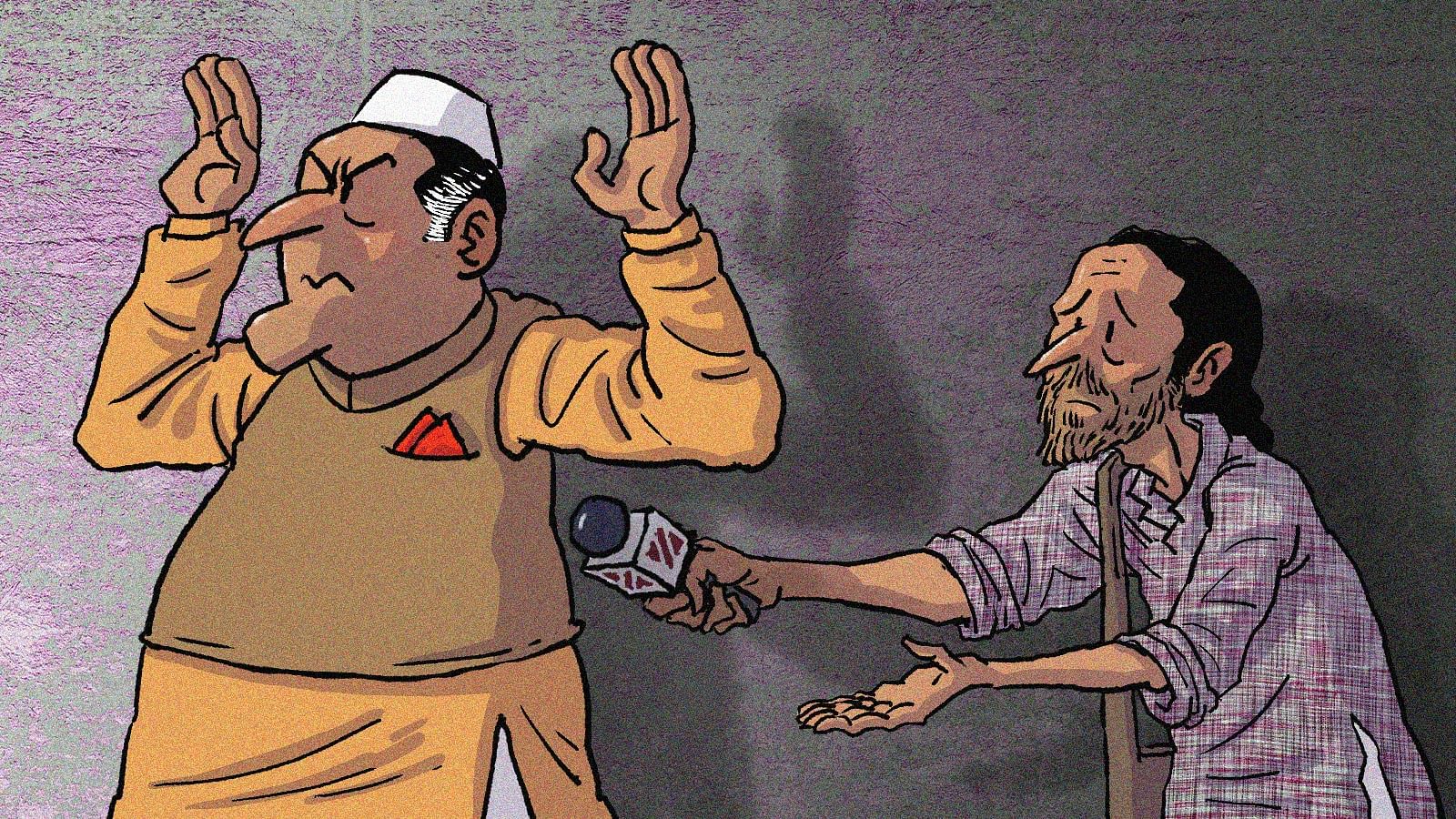