Diary of a Congressman: Walking with Kanhaiya Kumar in Bharat Jodo Yatra

What does the former communist leader make of his new party’s ongoing attempt to connect with the grassroots?

The writer is a Congress leader participating in the Bharat Jodo Yatra. He is a member of the national executive committee of the party’s social media department.

The man has his selfie with one of the more recognisable activists and young leaders in Indian politics. Kumar gets to keep walking. He knows that if he stops for every request, every conversation he’s not going to get far. Later, a kilometre or so into our walk, he’s asked eight times (I’m counting) for a selfie. Each time he navigates the request barely pausing to stop.

Right now it’s a warm morning, likely to turn hot and humid as the day goes on. The midday destination, Pattambi town, is 13 km away.

The cardinal rule for political leaders of a certain “weight” is never, ever to be caught alone in public. Then why is Kumar walking ahead and alone, away from the action and the media focus? A few hundred metres behind us, thousands of Congress cadres, local residents, news crews, and assorted security teams have converged in the town centre along with Congress leader Rahul Gandhi and a number of political heavyweights to kickstart this day of the Bharat Jodo Yatra. It’s a celebratory, festive environment, with drums beating, slogans ringing and music blaring.

As we get into our stride on the tree-lined state road, Kumar explains why he’s walking alone: “The main objective of this yatra is to connect with people. I find it hard to do that if I’m tied down inside a security cordon. The world is a textbook and you need to read it.”

And it’s difficult to read the world from inside a security cordon.

Having kept moving despite multiple requests to stop, just half a kilometre in, we come across what looks like a marriage hall, and he does make a stop. A man asks him to inaugurate a chess tournament. He pauses, appears reluctant to stop, but then gives in with good grace. The man making the request is Chandy Oommen, son of the two-time Congress chief minister of Kerala Oommen Chandy. Even so, Kumar wraps up the proceedings in less than two minutes, and keeps moving.

For Kanhaiya Kumar, much of his life is lived subject to the random, mercurial factors of time, chance, necessity, and compromise. And having the will and judgement to know when to walk on, or walk away.

Walk on or walk away, it’s clear within just a few days into the Bharat Jodo Yatra that Kumar is, to quote Rudyard Kipling, the cat that walks by himself. On the very first day, he almost doesn’t get into a line with the fellow yatris to start the march because he does not like getting into martial formations and doesn’t like wearing uniforms.

We have walked a couple of kilometres at a decent pace. The day is getting hotter and it’s not even 7.30 am. While the large crowds have somewhat dissipated, there are still clumps of people lined outside their doorways, groups of flag-carrying cadres waiting for the main body of the yatris to walk by.

Two boys dart out of the street side and ask Kumar to stop for a selfie, and once again he complies while on the move. But then a third man almost body checks him (this too happens often), grabs his hand and wants to take him “for a meeting with friends and tea”. That man proves harder to shake off, but Kumar patiently disentangles himself.

You get the sense that underneath that amiable exterior is a man who knows exactly what he is doing. He made himself the most well-read person in his village because it was much better than the alternative. “Reading was the easy thing to do. Working in the fields, now that was hard,” he says. By his early teens he had read a Hindi translation of Lolita. He even raided those barber shops where waiting customers could flick through salacious magazines that carried hot and fevered romances. Or “sasta sahitya” as he puts it.

He’s just as clear about electoral politics. “Most student leaders don’t succeed in state or national politics,” he says. “Because student politics is raw idealism whereas the politics outside is interest-based.” The lessons learned in fighting, and losing, a Lok Sabha election in 2019 have sunk deep.

A few kilometres in we are joined by a group of Bharat Jodo Yatris. Quick greetings are exchanged, notes compared, and suddenly out of nowhere the atmosphere becomes more celebratory, pacier. Kumar is leading a round of sloganeering.

Most of the time political slogans tend to be repetitive and monotonous, with simple messages. For example, “Jeetega hhai jeetega” or “Desh ka neta kaisa ho”. Kumar, I realise, is turning the experience into a show, almost a sound and music programme, with its own beat and rhythm. The context of the sloganeering is: why are the yatris marching? For a full 15 minutes he weaves history (Gandhi, freedom struggle), culture and language (Kerala), religion, social change into the simple two-paced lyrics that the yatris are belting out.

And he’s making most of it up as he goes along.

It’s a memorable experience, says Vaibhav Walia, a yatri from Uttarakhand who’s with us at this time. “He’s a teacher deep down,” Walia contends. “His experiences have converted him into a master of words, with incredible command over language.”

We move on past hamlets and the straight road leads into Ongallur town, where the thousand-plus waiting crowd absolutely mobs him. This man has that rarest of qualities – charisma- and it is showing in the crowd’s response. He has history here. Ongallur is part of the Pattambi assembly constituency and Muhsin Mohammed, the CPI legislator, was Kumar’s JNU roommate. “I campaigned twice for Muhsin,” he grins, “and now they know me well enough to lobby for repairs to the local roads.”

Once past the town the roads are emptier, and you can see that he’s hobbling a bit. We are all under the strain of 20-30 km daily marches. Kumar is also carrying a fever. Why doesn’t he take a break for a day or two? “The body needs to learn a lesson,” he says. “That it can’t simply stop for a fever or some aches and pains”. An abiding memory from Bihar is that of labourer women working at the bhatta into their ninth month of pregnancy.

Kumar knows when to accept necessity. It drove him to administer polio drops for a daily wage of Rs 50 daily while in class 8, work as a medical representative in Delhi, train to repair air conditioners and refrigerators to “get a good job abroad”. Even prepare for four years for the UPSC examination, which he incidentally never took. “It’s the feudal mindset,” he says of himself, “that propels one to value government jobs.”

But he’s moved past that. We are in the home stretch of the morning walk, and the roads are becoming broader, the crowds growing again.

He’s reflecting on how his life has turned. “I never was a firebrand activist,” he says. “But then Rajnath Singh [then union home minister] had me arrested for sedition in 2016, and it became a national issue.” The man who never had “so much as a case registered against him” was charged with sedition and became a cause célèbre. But for the mercurial combination of time and chance, he says, “I should have been an assistant lecturer at some university by now.”

He slips off to the roadside to strike up a conversation with a mother and child (at times he simply walks up to people and introduces himself). I take the opportunity to ask him why, after so many years with communist parties, did he decide to join the Congress last year?

It’s a question that Kumar says he has also been asked these past few days, by people he met on the road. “My answer is, ‘I haven’t given up the fight, I’ve changed the tools.’”

“Communists believe that it’s not enough to have their ideology, you need to be in the party too,” he says. “That isn’t true. Also, Gandhi is more relevant in the Indian context than Lenin.”

He continues, “Communists are totally against capital. I am in favour of small scale and medium scale capitalists, but against crony capitalism”.

Kumar has earned his opinions the hard way. This is a man who used his scholarship money at JNU to fund a toilet for his mother, who was for so long used to going outside.

We are almost on the cusp of entering Pattambi town, 13 kilometres done, when we encounter the immaculately clad Seva Dal Jhanda Tukdi in their dazzling white uniforms. Carefully chosen from the frontal grassroots Congress organisations, these are the flagbearers of the Bharat Jodo Yatra, positioned at the head of the procession. Kumar walks across and volunteers to be the one carrying the flag, a position of some honour. “I try to do this once a day,” he says. “It’s a reminder of why we’re walking in this yatra”.

For the next few minutes we walk in silence. Seemingly out of nowhere he says, “I’ve never gone back to JNU.” Why is that? “I want to preserve the memory I have, I don’t want new impressions to replace the remembrance of what it used to be. I want to keep that nostalgia.”

We are in Pattambi town, and Kumar lets go of the flag. Once again he is surrounded. As he moves up, a distinctly male voice shouts from somewhere up on a side balcony, “I looooove you Kanhaiya Kumar!”

There’s laughter, he waves without looking back. 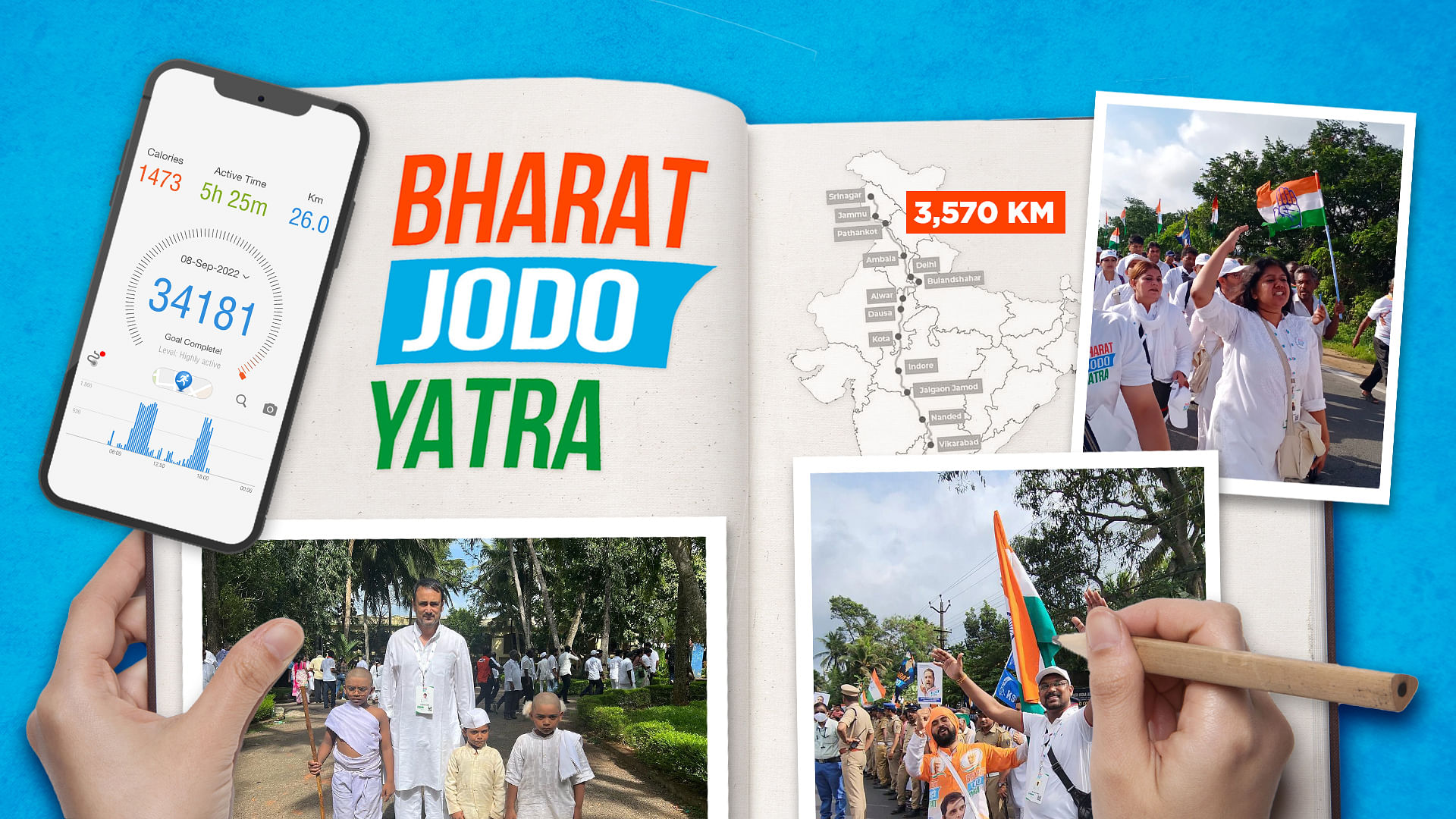