Supporters of the Citizenship Amendment Act are ‘proud’ for unleashing violence on the largely Muslim protesters against the law. And they boast about the Delhi police being ‘on their side’.

For two days now, violence and lawlessness have reigned in North East Delhi. Amid a near-riot situation Monday, supporters of the Citizenship Amendment Act resorted to arson and stone-pelting. And they were “proud” of it.

“Yeh toh Hindu jagaran han,” proclaimed Manoj Kumar. “This is Hindu awakening.” Manoj was among dozens of CAA supporters who had been stationed at Maujpur Chowk since Sunday evening. “The Muslims can protest at other places but without blocking the road. We have tolerated enough.”

Manoj’s anger was directed at two sit-in demonstrations against the citizenship law at Jaffrabad and Chand Bagh near Maujpur Chowk. The protesters had occupied roads since Saturday evening, nearly two months after a similar protest began in South Delhi’s Shaheen Bagh. While the Jaffrabad protest blocked the Maujpur Road, Kardampuri’s protesters sat by a bridge running parallel to the road. Both areas have large Muslim populations.

After the citizenship law was passed in December last year, around a dozen sit-in demonstrations erupted across the city, some blocking roads. In North East Delhi, CAA supporters started attacking the protesters on Sunday, sparking widespread violence. A three-km stretch along Delhi Metro’s Red Line between Jaffrabad and Kardampuri saw stone-pelting and arson.

The violence began when a group of CAA supporters clashed with the protesters near the Maujpur-Babarpur Metro Station, which is equidistant from the two sites of protest. The attack occurred shortly after Bharatiya Janata Party leader Kapil Mishra warned of chaos if the police failed to clear the road of protesters within three days.

Following the first round of unrest, the Maujpur Road turned into a communally charged battle zone, with four pockets divided between the law’s supporters and opponents. While Kardampuri and Jaffrabad on either side protested against the law, Maujpur Chowk and Maujpur Tiraha in the middle were occupied by its supporters.

Vikas Tyagi, who works at a Mother Dairy booth, is a CAA supporter. He was among those demonstrating at Maujpur Chowk. Vikas told Newslaundry he had blocked the left side of the road with 50-60 other men at midnight on Sunday. “Today, for the first time, Hindu sons have come out,” he told Newslaundry on Monday evening. “We are trapped by Muslims from both sides. We will not leave the spot until they vacate the road.”

Sunday night along Maujpur Road was calm but restive. But violence broke out again on Monday, spilling over into nearby neighbourhoods.

In Bhajanpura, a petrol pump was set afire. In the evening, a market in Gokulpuri was set on fire as well. Throughout the day, there was stone-pelting, and shops and homes were vandalised and torched in Maujpur and Jaffrabad. There were also reports of violence from the adjoining Karawal Nagar and Chand Bagh.

A little past noon on Monday, a man wearing a red T-shirt brandished a countrymade pistol during the clashes unfolding on the road connecting Maujpur with Jaffrabad. A policeman tried to stop him but the man pushed him aside and fired several rounds. There were no casualties. The man then slipped into the crowd and fled. By Monday night, some news reports the gunman had been identified as one Shahrukh.

According to the Delhi police, three civilians and one police head constable succumbed to injuries sustained during the violence. Amit Sharma, deputy commissioner of police, Shahdara, was among those injured.

By evening, the police announced that Section 144 of the Criminal Procedure Code, which prohibits the assembly of four or more people at a time, had been imposed in the affected areas of the North East Delhi.

Delhi Police is making every effort to restore normalcy. Sec. 144 has been imposed in the affected areas of North East district and strict action will be taken against miscreants and anti social elements.

As the near-riot situation unfolded, allegations flew thick and fast between supporters of the law and its opponents.

Sajid, 28, is a tailor who was at the protest site in Kardampuri Monday morning. At about 11 am, he said, a mob of 500-odd people came and began hurling stones at the protesters.

“Many of them continuously chanted ‘Jai Shri Ram’ and wore saffron kurtas,” Sajid said. “Caught unprepared, those of us standing at the site started running into the lanes.”

Sajid said Muslim boys in the locality began to “retaliate” out of “self-protection”. “Stone-pelting continued for a little more than an hour on both sides,” he added. “Police and paramilitary personnel lobbed teargas shells to bring the situation under control.”

Mohammad Nouman, a vegetable vendor from Jaffrabad, also blamed the violence on those supporting the law.

“At around 3 pm, about 200 CAA supporters came running from Maujpur Chowk towards the Jaffrabad protest site,” he said. “They vandalised shops and homes along the way, before pelting stones from near the Baghwali Masjid.”

Nouman continued: “Provoked, many from the Jaffrabad side immediately did the same. It continued for half an hour.” He claimed that the stone-pelters were waving saffron flags and chanting “Jai Shri Ram”.

However, at Maujpur Chowk, supporters of the law such as Manoj and Vikas refuted these allegations. In their version, the provocation came from the “Muslim side”. As they spoke with Newslaundry, many of them wielded batons and iron rods. Someone was even standing atop a temple, holding a microphone, urging supporters to hold the area, and not “back down”. The crowd responded with chants of “Jai Shri Ram”, “Bharat Mata ki Jai”, and “Delhi police zindabad”.

“They [the Muslim protestors] are lying. This morning, they first came from the Kardampuri side and began raining stones at us,” said Sachin Gautam, a student. “There were not many of us back then. We could not overpower them despite throwing stones. The police came and saved us.”

After the “morning attack”, Gautam said, supporters were summoned from areas like Akshardham, Janakpuri, Rithala and others. Their numbers swelled and they became “prepared”.

“This way, the gathering became about 1,000-people strong,” he said. “They came on bikes and we provided them with sticks and rods from our homes.”

Gautam’s friend, Manish Kumar, said this helped the supporters counter the “Muslim protesters from Jaffrabad” when the second round of violence began in the afternoon. “When they came to pelt stones, we chased them away this time,” Manish said.

It was like a match of communal violence. Yet the Delhi police, ostensibly the referee, appeared to favour one side. Gautam and Manish repeatedly said the police were “on our side”.

“When we went chasing after the CAA protesters towards the Jaffrabad side, several policemen went with us,” Gautam said. “They lobbed teargas shells as we continued to pelt stones at them.”

Vikas, who was sitting with Gautam and Manish, agreed. “We have full faith in the police. They have protected us today.”

Did the police stop them from wielding rods and sticks? Vikas shot back, “Why would they? Galat thodi kya hain hum ne. We have barely done anything wrong.”

At 6.30 pm on Monday, after a few hours of calm, about 20 baton-wielding goons started running from Maujpur Chowk towards Jaffrabad. They stopped after 100 metres and began pelting stones at shops and houses lining the road. Many of them slammed the buildings’ shutters and doors with sticks and rods.This continued for about 10 minutes until a few policemen dispersed them.

As darkness fell, a group of men near Maujpur Chowk began stopping autorickshaws and two-wheelers passing through the crossroads, seemingly at random. One of them told Newslaundry they were “checking if the passersby were in support of the CAA or not”. A couple of them put tilaks on the foreheads of some of the motorists after conducting their “check”.

The Delhi police continued to stand guard. Newslaundry asked one of the policemen about the CAA supporters wielding batons and stopping motorists. The policeman replied indifferently, “Aise kaise roke? How can we stop them just like that? We can only act if the situation deteriorates.”

This raises several questions on the role of the police in controlling the violence. Earlier in the day, videos and photos on social media showed policemen hurling stones alongside the crowds.

This is Khajuri Khas, Wazirabad main road. A shop is burning. Heavy stone pelting. Notice what the cops are doing though? @TOIDelhi pic.twitter.com/NNy4m2oUgs

The protesters at Jaffrabad and Kardampuri too accused the police of being “biased”. Sadiq, who lives near Tentwala School at Jaffrabad, claimed some policemen pelted stones along with CAA supporters on Monday afternoon.

“A boy was badly injured and a car’s windshield was broken as a result. Only later, they fired teargas shells and tried to control the violence,” Sadiq said.

Another protester at Kardampuri told Newslaundry the police were “guarding” stone-pelters on Monday morning. “They [policemen] did not stop the stone-pelters from the other side. Instead, they fired teargas towards us,” he said.

The protester, who did not want to be named, alleged the violence since Sunday was “pre-planned” and had “high-level backing”. “Think about it: the protest has continued here for almost two months now. Why did violence break out only on the day when BJP’s Kapil Mishra made the speech?” he asked.

As of Tuesday morning, the area was tense. Curfew has been imposed and a number of metro stations are closed. 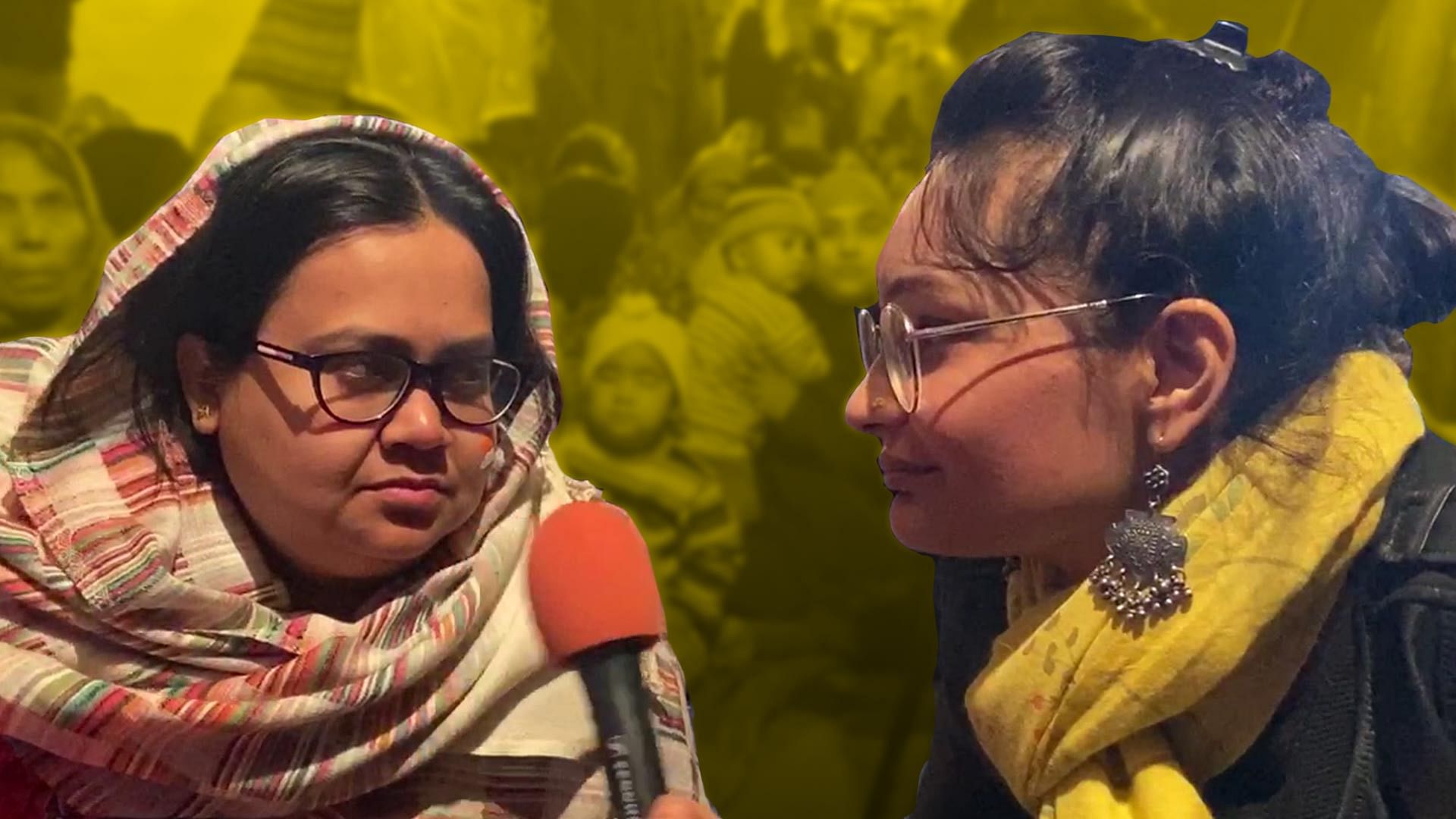