‘I’ve been forced to resign’: A tight-lipped HT Media lays off over 100 employees

Employees across departments at HT and Mint were laid off, but with no official announcements or transparency.

It’s been a gloomy week at the Delhi offices of HT Media, the company that publishes Hindustan Times and Mint. Starting Monday, employees at the two papers were asked to come to the office for a meeting.

A human resources representative and a senior member from the editorial management would sit in every conference room throughout the day. One by one, employees were called in for brief meetings where they were told their stints at HT Media had ended. They were being laid off.

Unlike the video calls at the Times Group, employees at HT Media learned the news face-to-face. Over 100 employees reportedly went through this process, including reporters, desk editors, photojournalists, designers and those in the marketing, sales and circulation department.

Throughout this week, those who still have their jobs at the newspapers have seen their colleagues walk into the newsroom, pack their stuff, and leave — swallowed by one of the worst crises in the media industry in India in recent memory.

Those affected were offered a choice: either resign with the offered terms, or be terminated without them. The terms were CTC (“cost to company”) payments for June and July, medical insurance coverage until December 2020, and an assurance of outplacement, or assistance to find a new job. Those eligible for gratuity will receive it.

A Hindustan Times employee, when given the option to write his own resignation, put two crisp sentences on a blank sheet of paper: “I am not resigning by my own will. I have been forced to resign.”

This grim scenario is not limited to Delhi alone. The Chandigarh bureau of the Hindustan Times has also been hit, leaving staffers despondent.

Affected employees told Newslaundry that over 100 people were laid off.

In the paper’s Pune edition, two employees have been asked to go. Newslaundry learnt that since all the Pune staffers have been working from home, Hindustan Times will no longer rent an office space in Pune.

Newslaundry could not independently verify these numbers, since our repeated attempts to reach out to editors, HR officials and spokespersons at HT Media were snubbed.

It is ironic that the print media, which otherwise demands transparency and accountability from the rest of the observable universe, would act so opaque and tight-lipped about its own internal rumblings. This is true for the Times of India, as well as the radicals at the Telegraph: both publications have laid off employees this month, and both shied away from putting out information about the affair in the public domain. Journalism might be a public service, but the business of journalism remains a very private practice.

HT Media is no different.

Additionally, HR officials at Hindustan Times in Delhi and Chandigarh declined to reveal any information about the layoffs to Newslaundry. Monika Aggarwal, the vice-president of HR at HT Media, also did not respond to an emailed questionnaire.

“The lack of transparency is incredibly frustrating, not just for an outside reporter but for people within the organisation,” an employee at Hindustan Times told Newslaundry. “Everyone knows that there are more than 100 people yet to be laid off at HT Media, but they don’t know if they are next. Officially, there has been not one word about the paper going through a tough time.”

The employee said the company has only officially acknowledged the departure of two employees — both of whom are national editors at Hindustan Times. “But these two were not thrown under the bus,” the employee said. “They were supposed to leave anyway, so the management told them that they should put in their papers now, so that they have two less people to fire.”

The two national editors in question are Padma Rao and Poonam Saxena. While Rao put out a statement on social media about her departure, Saxena told Newslaundry that she chose to retire from the profession and did not renew her contract at Hindustan Times, which expires on May 31, 2020. The contract of a photo editor in Mumbai also ends on the same day. Newslaundry learnt that he and the paper “mutually” decided to not renew it.

Books editor, Manjula Narayan, rumoured to have been laid off, told Newslaundry that she still has her job.

But the company’s reticence has hit employees hard. “I feel like I have been conned,” a staffer at Mint told Newslaundry. “I went out of my way to work during this coronavirus lockdown. I rendered my services to the publication over the protests of my family. But what do I get for all this? A layoff!”

‘There is no dignity in this’

The impact of the layoffs at HT Media has been felt across departments. Well-known photojournalists and illustrators were shown the door. An employee associated with Hindustan Times Chandigarh for more than three decades was not exempted.

This is contrary to what Praveen Someshwar, the chief executive officer at HT Media, had told employees at a town hall in April. At the time, Someshwar said that pay cuts were on the cards, but no one will lose their job in 2020. From April 1, the company had initiated a “salary restructuring plan” that effectively left employees with less money on a monthly basis.

Employees at Mint and Hindustan Times claimed that the criterion for selecting employees for the layoffs was, like all other communication, hazy. Newslaundry spoke to more than a dozen of them, and almost everyone claimed that the selection was not based on merit, and that editorial heads took into account nothing more than their own inclinations towards their colleagues before firing them.

Affected employees at the company believe that besides cutting down on budget and headcount, a plan to editorially merge Mint and Hindustan Times is underway. “Say if both papers have a political reporter each, now they’re getting rid of one of them,” a staffer at Mint told Newslaundry.

One staffer at Hindustan Times in Delhi the layoffs did not surprise him. “After the salary cuts, many of us knew that things would not stop there. I had other offers and something might work out. Only that we thought the layoffs would come after the lockdown. I’m only surprised by the timing.”

A staffer at Hindustan Times’ Chandigarh bureau told Newslaundry that the last meeting with the resident editor and an HR official was “very embarrassing”.

“We were asked to sign our resignation then and there. I have worked here for almost a decade and this is the way I was treated, like I was just a head count and had no value at all,” said the employee, who now faces an uncertain financial future. “I have a car loan and a home loan, and we don’t have much to show for savings in my family. Life had turned around all of a sudden.”

“It was shocking and bizarre,” added another employee in Chandigarh. “The editor and the HR head first talked about my hometown and the beautiful weather there. Next, they tell me that Hindustan Times cannot afford me anymore. I couldn’t process it. Young people today are lured by the bling of journalism. But I hope they see this side of it too. I’ve been in the profession for two decades. But when the going got tough, I was simply tossed away.”

Employees in Delhi told Newslaundry that when the dreaded niceties of the layoff meetings at Mint were finished, HR officials and senior editors told them that HT Media was “restructuring” its publications and that “in the new scheme of things, we do not see a place for you”.

One staffer added: “Even after my meeting, when a few of us were waiting for other friends to finish their meeting with the boss, HR people told us that we shouldn’t wait for them inside the office. We are asked to go out. There is no dignity in this.”

HT Media offered employees a familiar reason for this “downsizing”. “We were told that HT Media is not making money since the lockdown was imposed. It can no longer sustain everyday operations, which stands at Rs 3 crore a day,” said an employee at Hindustan Times in Delhi.

“The lack of business due to the lockdown, the impact on business due to Covid-19 and the continued payment of salaries and wages could potentially drive the private establishments into insolvency, unless suitable economic policies and financial measures are brought in by the government to safeguard the industry and economy,” stated the affidavit.

After a week of ruthless layoffs, it is not entirely clear what a leaner and meaner HT Media will look like. Many, however, warn that the layoffs this week were only round one of a long, despiriting process.

Regardless, the lockdown-induced economic distress has not only revealed the financial frailty of India’s biggest media companies, but their incredible appetite for opacity. This is perhaps due to the hypocritical and grandfatherly belief that journalists produce stories, but are never the story themselves.

Both the Times Group and HT Media duly reported on layoffs at Zomato and Uber this month. Their reports even quoted official statements by these companies on the layoffs. In the US, many media companies have journalist unions that negotiate layoffs with their management and put out details in an official statement. But the Indian print media, by media standards abroad and corporate practices at home, remains archaic, ossified and brittle. If it now seems to be on a path to painful combustion, let’s hope that at least a better institution arises from its ashes.

Update: After this report was published, Padma Rao tweeted to stress once again that she resigned from her job at Hindustan Times voluntarily.

@madhutrehan Dear Ms. Trehan, @newslaundry must check facts.This article damagingly says I was "asked to resign". I resigned myself in mid April, for a new offer elsewhere, whose start date got delayed to June 1 due 2 lockdown. 1/2 https://t.co/hhbftVeKfl

@madhutrehan 2/3 I got my new start date on May 22, I resigned on May 23. HT's E-i-C put out an internal mail about my VOLUNTARY departure.The 'employee' your article quotes wld have recd it. HT is a fabulous daily, I am SAD 2 leave, but look fwd 2 my new job.@newslaundry 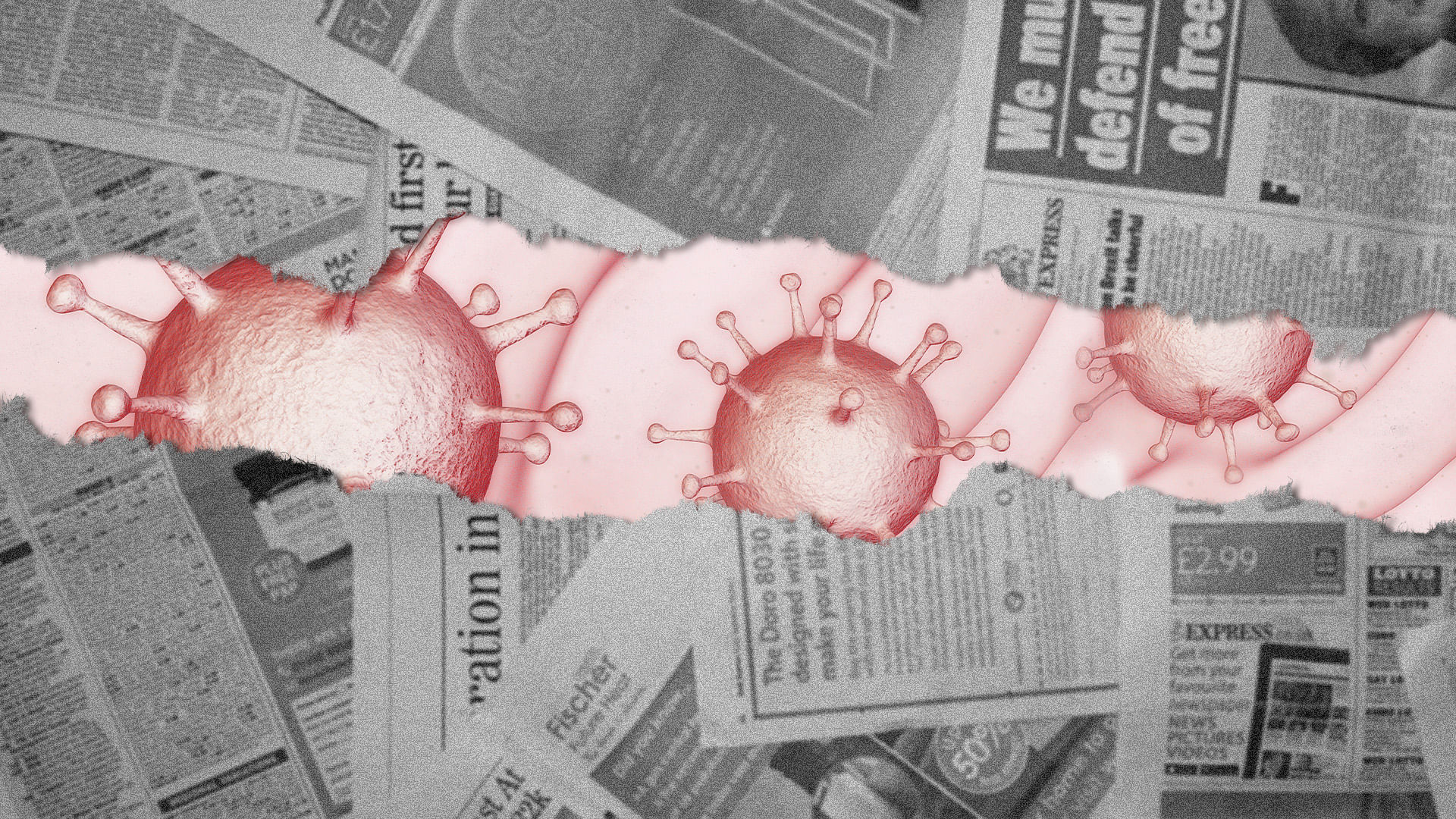