The railway line is expected to endanger the ecologically sensitive area in multiple ways.

The lead author of a study that was cited to allay environmental concerns surrounding a controversial railway project in the Western Ghats has told Newslaundry that bureaucrats had coerced unwilling scientists into producing it.

The study was prepared in 2011 by the Indian Institute of Science at the Karnataka government’s behest. Dr TV Ramachandra, the lead author, categorically told this correspondent that the scientists knew the project would cause irreparable harm but they were pressured into producing the report.

Making matters worse, the Karnataka government cleared the project on March 20 even after it had been rejected by a statutory body, whose decision was reversed 11 days later at the insistence of three political heavyweights. The meeting where the project was approved itself was held in violation of the Karnataka State Board for Wildlife Rules.

The project and its clearance

The project in question is a railway line that seeks to connect Ankola on the coast with Hubballi in northwest Karnataka. First announced in 1998, it has met with stiff opposition ever since, given the ecologically sensitive nature of the Western Ghats, which it will pass through.

Laying the broad gauge line, as currently planned, will require the felling of nearly 2.2 lakh trees in the biodiversity hotspot, which is also a Unesco World Heritage Site. The rail route cuts through an area between two tiger reserves, endangers multiple wildlife species endemic to the Ghats, and is likely to trigger landslides, floods and droughts in adjoining regions. Also, a railway line already exists from Hubbali to Madgaon, from where Ankola is around 90 minutes away by road. The total journey time is just an hour and a half more than the proposed railway route.

In Karnataka, development projects in and around protected forest areas cannot materialise without clearance from the Karnataka State Wildlife Board. The board of 21 members — environmentalists, forest department officials, a controversial mining baron, and the chief minister as the head — met on March 9 and recommended that the project be scrapped.

TM Vijay Bhaskar, the state’s chief secretary, attended the meeting as a special invitee, and was the lone voice in favour of the project. However, chief minister BS Yediyurappa decided to shelve it.

On March 11, state ministers Jagadish Shettar and Shivaram Hebbar addressed a press conference where they declared they would get the decision reversed. Shettar is Karnataka’s industries minister and Hebbar the labour minister.

They sat down with the wildlife board’s members at an urgent meeting on March 20, along with senior Congress leader and MLA RV Deshpande. Here, Shettar and Deshpande argued heavily in favour of the project, dismissing concerns raised by other members and making light of its environmental impact.

They got their way. Yediyurappa agreed and, on March 20, the board’s previous decision was reversed, citing the project’s “importance” for the development of northern Karnataka. Importantly, Shettar and Deshpande’s rationale — that the project will not affect the fragile ecology of the Western Ghats — stems from a report prepared at the government’s behest by the Indian Institute of Science, Bengaluru, in 2011.

Though the report suggests remedies to mitigate the damage from the proposed railway line, its lead author, Dr TV Ramachandra, told Newslaundry the project will cause irreparable harm. Ramachandra, a professor at the IISc’s Centre for Ecological Studies, co-authored a 2019 report stating that human interference in the Ghats is responsible for floods and droughts in Kerala and Karnataka, and warning that further deforestation will increase the intensity of the disasters.

According to Ramachandra, the report on the railway line was commissioned by Karnataka’s infrastructure department in February 2011. It is titled “Biological Diversity, Ecology and Environment Impact Assessment with Mitigation Measure: Hubli-Ankola New Broad Gauge Railway Line”.

Previously, the state government had scrapped two other projects on the IISc’s recommendations — a road-widening project and a railway line between Honnavar and Talaguppa that would have passed through the habitat of the lion-tailed macaque and endemic taxa. The shelving of these projects, on the ground that they would harm the flora and fauna of the Ghats, was used by bureaucrats as leverage, Ramachandra claimed, who requested a study on the Hubbali-Ankola railway line “in return of this”.

“The government requested us and told us to do the study,” he added. “In fact, the in-charge of the infrastructure department came and told the IISc director that they would go on hunger strike if we didn’t take up the project.”

Ramachandra said his team still didn’t want to do the study “because we know that in an ecologically sensitive region, we cannot allow any kind of damage, whether it is one or ten percent. We did not want to take the risk but the government was so much interested that we did that study”.

But the mitigation measures — cited by Shettar and Deshpande while pushing for the project’s approval on March 20 — are just one part of the report. The rest of the findings establish how sensitive the project is for the environment and the wildlife.

But this isn’t the only problem.

In the March 20 meeting, three board members highlighted that the National Green Tribunal had asked the South Western Railway to submit a fresh application for the Ankola-Hubballi railway line. This renders invalid any feasibility report that has already been prepared, including the IISc report.

Sanjay Mohan is Karnataka’s principal chief conservator of forests, managing director of the Karnataka State Forest Development Corporation, and a member of the KSWB. In the March 20 meeting, Mohan said the IISc report was prepared without consulting the chief wildlife warden, a statutory authority under the Wildlife Protection Act. Mohan added that the National Board for Wildlife mandated that the respective state’s wildlife board be involved in any such study.

Praveen Bhargav, who has served in the National Board for Wildlife, and is now a trustee of Wildlife First, a conservation advocacy organisation, told Newslaundry that the IISc does not hold any legal authority to suggest mitigation measures for a project like this. Bhargav also said the report’s terms of reference were not framed by the chief wildlife warden or any other statutory authority.

According to Bhargav, the IISc is not an accredited Environment Impact Assessment consultant organisation under the National Accreditation Board of Education and Training. Only organisations approved by NABET are authorised to study the EIA of a project.

Punati Sridhar, a KSWB member and head of Karnataka’s forest force, told Newslaundry that it was “apparent” that the government asked the IISC to recommend mitigation measures so that the government could use their report to counter objections from environmentalists.

The March 20 meeting was held in violation of the Karnataka State Board for Wildlife Rules 2006. As per these rules, a notice for a meeting of the KSWB should be served to its members at least 15 days in advance. For the March 20 meeting, a notice was issued only three days before, on March 17. As a result, five members could not attend it.

Sanjay Mohan confirmed to Newslaundry that the three politicians — Shettar, Deshpande and Hebbar — pressured the chief minister to approve the project. Importantly, the board does not vote; the decision is made by the chief minister.

Three other board members told Newslaundry, on the condition of anonymity for fear of reprisal, that the trio “dominated” the meeting and influenced the board’s decision — even though they were only attending it as special invitees.

Shettar, 64, a former chief minister, is the minister for large and medium industries. Deshpande, 73, a Congress veteran, has served as the industries minister twice, including when the railway project was first proposed in 1998. Hebbar, 63, is the state minister for labour and sugar.

KSWB member G Malleshappa, president of the Swamy Vivekananda Sewa Trust in Chamarajanagar, said when such tall political leaders push hard for their demands in a meeting, board members are automatically pressured to keep mum.

After the meeting, Sowmya Reddy, a Congress MLA, resigned from the board. Reddy told Newslaundry that Shettar, Hebbar and Deshpande had “bulldozed” members.

“No matter how much the members objected, they were not willing to listen. I resigned from the post as I don’t want the blood of so many trees and wildlife on my hands,” Reddy said. “The issues like climate change, natural calamities like floods and droughts, the locust attack, and even the Covid-19 pandemic take place as the environment is being destroyed because of useless development. The point of boards such as the KSWB is defeated when non-members come and push their agenda, and don’t listen to experts. They [Shettar, Deshpande and Hebbar] don’t care about the environment, just about their agenda.”

Punati Sridhar said Yediyurappa heeded only Shettar and co even as other board members opposed the project. He said this showed the meeting had taken place only to approve the project.

Newslaundry could not contact Yediyurappa despite repeated attempts. Shettar refused to discuss the issue and hung up the phone.

Deshpande said while saving the environment was important, the development of Uttara Kannada — the region he has been representing in the Legislative Assembly for decades — was also important. “While saving the environment is necessary, the project is important to the development of north Karnataka,” he said. “We have already carried out numerous afforestation drives in the region to help mitigate the harm from developmental projects.”

When told that the study’s lead author differed, Deshpande brushed it aside. “It’s his personal opinion,” he said.

Anand Singh, the state’s environment minister and a board member who missed the March 20 meeting but who opposed the project in the March 9 meeting, told Newslaundry that there was “no controversy” about the project and “everything is clear”.

Singh also pointed out that a project’s approval by the state board isn’t final; it’s now up to the National Board for Wildlife to take a call.

Kapil Kajal is a freelance writer based in Bengaluru and a member of 101Reporters.com, a pan-India network of grassroots reporters.

Journalists are on the frontlines, reporting on the stories that need to be told. Support independent media and subscribe to Newslaundry today. 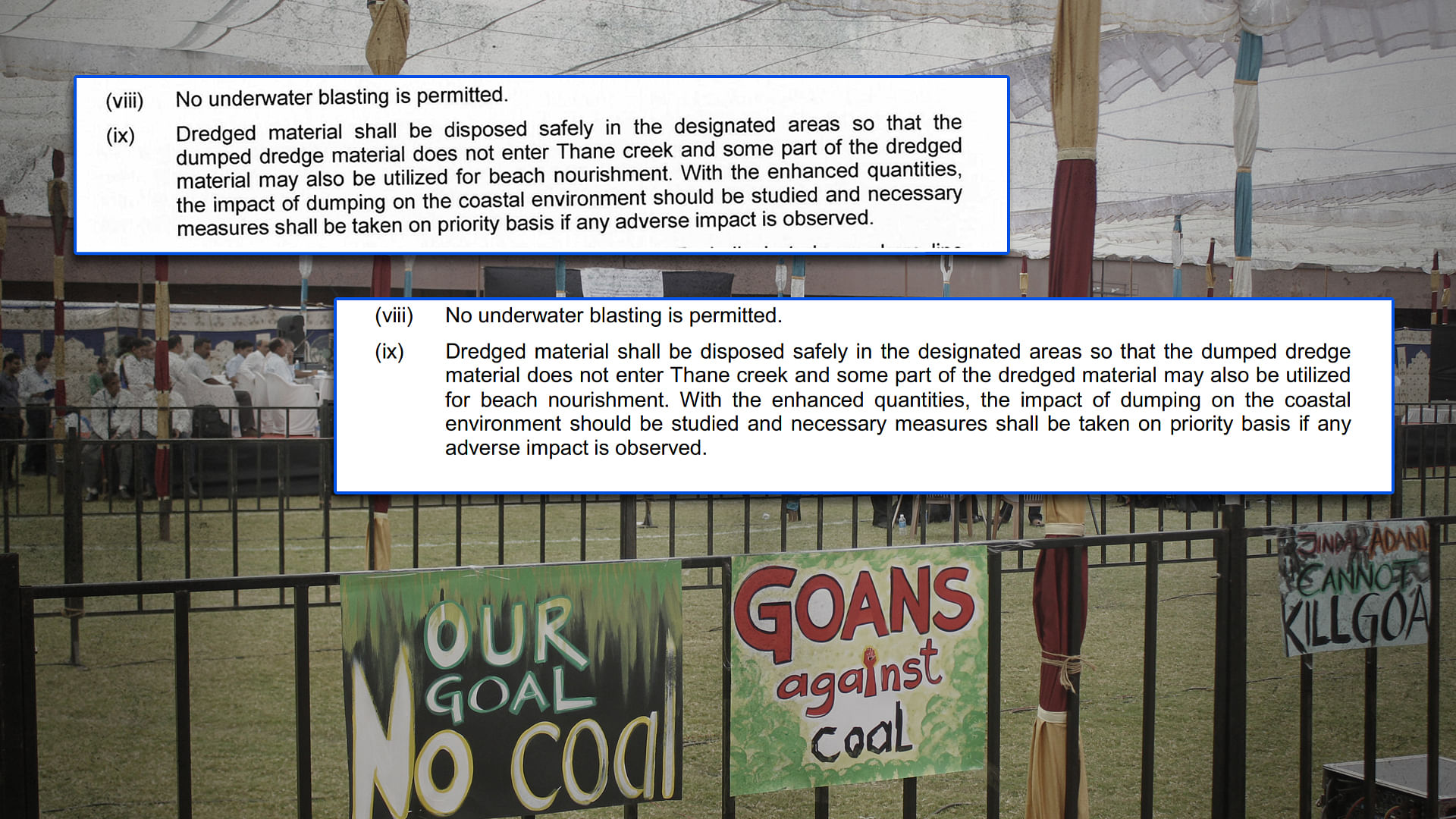