‘Tryst with destiny’ to ‘the God we failed’: How major newspapers covered #RamMandirBhoomiPujan

Pomp and grandeur marked the ground-breaking ceremony of the Ram Temple held yesterday in Ayodhya. A pet project of the Hindu Right, dreams became reality as prime minister Narendra Modi, donning dhoti and kurta, performed the bhoomi pujan ceremony a little past noon.

The foundation was laid with a 40-kg silver brick, a sapling and soil from across the nation. Ram Janmabhoomi, the birthplace of Lord Ram, had been “liberated” from the “centuries-old cycle of destruction and resurrection”, the prime minister said while addressing a select gathering later.

The temple town in Uttar Pradesh was in a festive mood, feeding the day-long coverage of scores of news channels that had been stationed since a day before. As it turned out, the coverage was as much about celebrating the prime minister as about celebrating the Hindu deity. And when they were not singing his praises, the channels were busy giving virtual tours of the upcoming temple, airing bhajans or talking to seers.

Expectedly, the event, “a defining moment” in the nation’s history, as the prime minister termed it, headed the front pages of leading English newspapers in the country this morning.

“Modi marks the Mandir” was the lead headline on the front page of the Indian Express. In the blurb, the daily pointed out the prime minister’s comparison of the temple foundation to that of the country’s struggle for independence. A picture of Modi performing the ceremony grabbed the centre of the front-page coverage.

The lead story was a reconstruction of Modi’s speech. “The entire country is emotionally charged today, the wait of centuries is ending today,” the prime minister was quoted as saying.

Modi made the comparison between August 15 and August 5 by highlighting the “sacrifices of several generations” behind both the occasions, the newspaper reported. He emphasised the influence of Ram and the Ramayana not only in India but in the whole of South and Southeast Asia. Speaking on Ram as the “link for unity in diversity in India”, Modi listed several Indian languages in which the Ramayana had been written.

The prime minister concluded by underlining the significance of Ram’s path of maryada (values) to urge people to maintain two yards of safe distance and wear a mask due to the pandemic.

Another report on the front page described how the Muslims in Ayodhya marked the day in silence, compelled by “a sense of quiet resignation and acceptance after the Supreme Court ruling nine months ago”. The report was titled: “For us, it’s a closed chapter after SC ruling, let us move on”.

In another report, the Indian Express highlighted how several leaders in the Opposition carefully crafted their responses to the bhoomi pujan ceremony by avoiding references to the BJP. A fourth report pointed out how yesterday’s ceremony was a fulfilment of a key ideological promise of the Hindu Right. Among the men who delivered it by working together for decades, it added, were prime minister Modi and Rashtriya Swayamsevak Sangh chief Mohan Bhagwat.

The lead story in the Hindu, as in the Indian Express, focused on prime minister Modi’s speech at the ceremony yesterday. Headlined “Modern symbol of Indian culture: Modi”, the report said: Mr Modi emphasised the word ‘modern’ and said the Ram temple would become a symbol of our ‘eternal faith’, national sentiments and collective willpower of crores of people.”

The report also noted Modi as saying that apart from adding grandeur to Ayodhya, the temple would also change the economy of the entire region with new opportunities emerging from the visits of devotees from around the world.

But the Hindu did remind its readers of the dark history behind the temple site. “The formal start of the temple’s construction comes almost 28 years after Babri Masjid was demolished by a mob of ‘kar sevaks’ on December 6, 1992.”

The prime minister had started his speech with the chants of “Jai Siyaram” and “Siyavar Ram Chandra ki jai”, which the report noted was “in sync with the local tradition and departure from the ‘Jai Shri Ram’ slogans popularised by the advocates of the Ram temple movement, including the Vishwa Hindu Parishad since the 1990s”.

“Ayodhya’s tryst with destiny”, read the headline in caps on the front page of the newspaper. The story focused on Modi’s comparison of the event to the country’s independence struggle and his emphasis on Ram as a thread of India’s unity in diversity. The prime minister said the temple should be constructed on the foundation of mutual love and brotherhood, it added.

However, the long and troubled history behind the temple was also encapsulated in the report. The beginning of the temple construction comes after a 135-year long legal dispute came to a conclusion in the Supreme Court in November last year, it noted. “It also comes in the wake of a three-decade-long mobilisation by the Bharatiya Janata Party (BJP) and its ideological affiliates, and the demolition of the Babri Masjid in 1992 — an act declared illegal by the same SC verdict — that led to communal violence and deaths in various parts of the country.”

Hindustan Times included reactions from politicians in the Opposition, including Congress spokesman Pawan Khera, Samajwadi Party leader Akhilesh Yadav, and Bahujan Samaj Party leader Mayawati. The report ended with a quote from Zafaryab Jilani, secretary of the All India Muslim Personal Law Board secretary: “We are quiet because we had said that we would respect the law of the land and go by the court’s verdict.”

The front page of India’s highest circulated English daily carried a picture of Narendra Modi prostrating in obeisance to the idol of Ram Lalla. In a box next to the picture, a comparison was made between this and his kneeling and touching his forehead on the steps of the Parliament in May 2014. “The temporal and the spiritual” was the caption.

The newspaper’s lead story was a package of the key highlights from the prime minister’s speech. “PM lays foundation stone for Ram temple, likens Ayodhya campaign to freedom fight” read the headline. An extract from the speech was cut out and put alongside the centre picture.

In other reports on the front page, the newspaper wrote about the festive mood in Ayodhya, RSS chief Mohan Bhagwat’s regret over LK Advani’s absence in the ceremony, the prime minister’s use of “Jai Siya Ram” instead of the “Jai Shri Ram” chant popularised by the temple movement, and also about the Congress party’s calculated reaction to the event.

Sticking to its characteristic tough line against the current government, the Calcutta-based national daily came down hard on yesterday’s ceremony. “The God that we failed” was the headline carried in big, white letters against a black backdrop. The strap read: “Raja and rishi are no longer separate in the Republic”.

The newspaper’s wrath stemmed from the fact that yesterday’s ceremony was performed by none other than the prime minister.

“The nation witnessed from Ayodhya on Wednesday the ritual merger of Church and State — rishi and raja — as Prime Minister Narendra Modi, elected head of a constitutionally secular state, turned de facto mahant to perform the ground-breaking rites of the Ram temple and declared all of India ‘Ram-maya’, or suffused with Ram.”

Telegraph reminded its readers of the similarities between the bhumi pujan and the inauguration ceremony of the rebuilt Somnath temple in 1951, attended by then president Dr Rajendra Prasad much to the dislike of prime minister Jawaharlal Nehru. The report said that yesterday’s event has “finally embossed India as a Hindu country and him [Modi] as its poster boy”, adding that the television coverage made that point sufficiently clear.

Modi was “oblivious, or defiant” that he was also the prime minister of one-fifth of the country’s population who do not follow Hinduism, Telegraph stated. Tracing the trajectory of the Ram Janmabhoomi movement since LK Advani’s Rath Yatra in the early 1990s, the daily explained how it led to a communally charged atmosphere and inaugurated a “seminal moment in a secular nations’ lives and times”, leading to bloodshed and bitterness between communities.

On Modi’s comparison of the Ayodhya movement to the country’s independence movement, the newspaper hit back: “He [Modi] omitted to mention that Gandhi’s was a painstakingly inclusive mission that brought all manners of Indian together to the common purpose of sending off an imperial regime.” 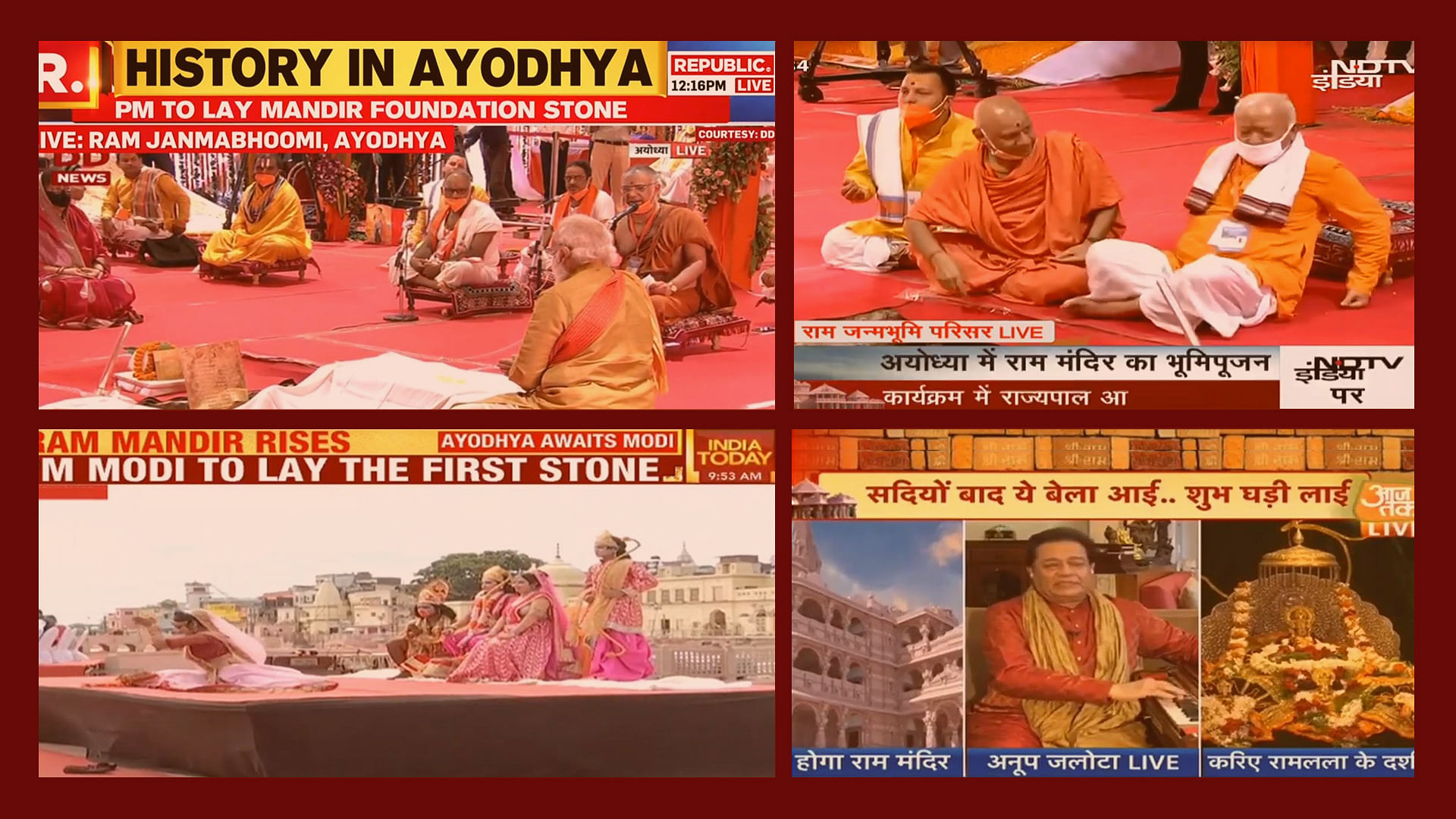