Lack of sanitisation, technical glitches, and long distances: How DU aspirants struggled through the entrance exams

The students had been protesting virtually against the exams, but the university went ahead with them anyway.

Delhi University held its entrance exams for various master’s, MPhil and PhD courses from September 6 to 11, amid protests from students. The exam was conducted by the National Testing Agency across 24 testing centers.

Students had been unsuccessfully protesting against the exams through campaigns on social media, citing a combination of Covid and the subsequent lockdown. The university paid no heed to their pleas and, as a result, many students either had to miss the exams or struggled to be able to sit for them.

One of them was Keerti Shukla, a resident of Shahdol district in Madhya Pradesh. Intending to take a the entrance test for a master’s in political science, she was allotted an exam center in Delhi. Shahdol doesn’t have its own railway station, Keerti and her family travelled 200 km by taxi to another train junction.

“It was expensive, but what else could we do?” she said.

The train was running late, so Keerti and her family had to wait at the overcrowded station for four hours — in the middle of a pandemic. “Going through the exam was a physically, mentally, and financially exhausting experience,” she said. “My brother and I had Covid symptoms days after. We are a family of nine and this makes me scared.”

Similarly, Jagriti Jain from Rajasthan’s Jodhpur took a 14-hour train journey and then a bus to appear for the exam in Delhi.

“The university should have reconsidered holding the entrance exams at such a short notice,” Jagriti said. “I don’t think taking exams in the middle of a pandemic is acceptable at all. The travel and the possibility of catching the virus made me really anxious.”

Students also complained about inadequate sanitisation arrangements at the exam centers and technical glitches in the computer systems.

“There was just one sanitiser at the entrance of the center which everybody had clearly touched. Everyone was asked to maintain social distance but they ended up crowding anyway,” said Ayushi Aishwarya, who appeared for the MA Sociology entrance exam.

“No computer systems or desks were sanitised. Everything had layers of dust on it,” said Priya Chauhan, who appeared for the LLB exam. “Several students faced issues with their computer systems. Multiple power cuts added to the problem.”

Anish Singh had to sit for two entrance exams on the same day. One of his exams was at 6 am, and was 20 km away from his other exam center. Like the others, he claimed the sanitiser dispensers weren’t working at his centers, and he had to “switch computers at least five times” thanks to technical issues. He also pointed out that the computers and keyboards were dirty, and had clearly not been sanitised.

Computer issues was a recurring theme for students sitting for the exams. “My computer lost connection multiple times during the exam and the invigilators didn’t know how to deal with it,” said Saurya Mishra, who was sitting for the entrance exam for a master’s in political science. “I had to login several times and start the test all over again. Towards the end of the test, I was unable to submit the answer script. This whole ordeal went on for an entire hour.” Compounding his woes was the fact that his exam center was 46 km away from his home in Delhi.

Delhi University’s guidelines for conducting the exams stated that each student would be provided with a new mask, and their personal masks were to be discarded on reaching the center.

“The problem here was that these masks were just lying around with no protective packaging and were being handed out by a person who wasn’t wearing his mask properly,” said Moksh Kalra, who appeared for the history exam.

Students also raised concerns over overcrowding in the examination halls. Shaifali Sharma told Newslaundry that she sat for the MA History exam at a center in Delhi’s Rohini. “I travelled 50 km just to sit in a small space which was overcrowded,” she said. “I wasn’t worried about my exam not going well, I was worried about contracting the virus.”

Pradipta Singh, who also took the history exam at a Dwarka center, pointed out that the small lanes and small spaces made for overcrowding.

“My exam was to be conducted in the evening, and the reporting time clashed with the ending of the undergraduate entrance exam, which caused a lot of overcrowding,” said Pradipta. “There were no sanitisers at the center and the invigilators were flouting safety precautions themselves.”

And yet, while these students managed to make it to their exam centers, others had to skip the exams altogether.

“My mother has asthma and my grandmother, who has many health issues, lives with us. Our home isn’t big enough to have a separate room in case anything happens,” said Rushnae Kabir, who had planned to sit for the MPhil exam. “I was worried that I would catch the virus and my mother or my grandmother could contract it through me. With that in mind, I decided to not give the exam.”

She added, “I don’t know about other entrances just yet. The authorities should’ve thought before conducting the exams on such a short notice during a pandemic which has also affected the economic lives of many. I had to literally pick between the possibility of dying and risking my career.”

Abrar Wani from Srinagar had planned to appear for the MA History exam. He was unable to fill his application form online due to the slow 2G internet in Kashmir, he said, and asked a friend to fill the form on his behalf. When the admit cards were released, Abrar was shocked to see he had been allotted a center in Delhi.

“Due to family problems and the threat of Covid, I decided not to go,” he said. “I can't travel more than 1,000 km at this time, just to give an entrance test."

Unlike Abrar, Rashid Lone travelled from Srinagar to Delhi to sit for the MSc Physics entrance exam. “I picked Delhi as my center since I was hoping the number of cases would come down or the National Testing Agency would give us the option to change our center to Srinagar,” he said. “But that didn't happen, so I had no choice but to travel from Srinagar to Delhi."

The university’s decision to go ahead with the exams forced students to make difficult decisions. Arundhati Chowdhary lives in Guwahati. Days before her MA Geography entrance test, her parents tested positive for Covid. Luckily for her, her test came back negative and she subsequently sat for her exam.

“I disclosed in the form that I had been in close contact with a Covid patient but luckily they didn’t say anything at all,” she said. “However, at my center, there were no masks or sanitisers.”

Newslaundry reached out to Vinay Gupta, the dean of examinations for Delhi University, but did not receive a response. This article will be updated if a response is received. 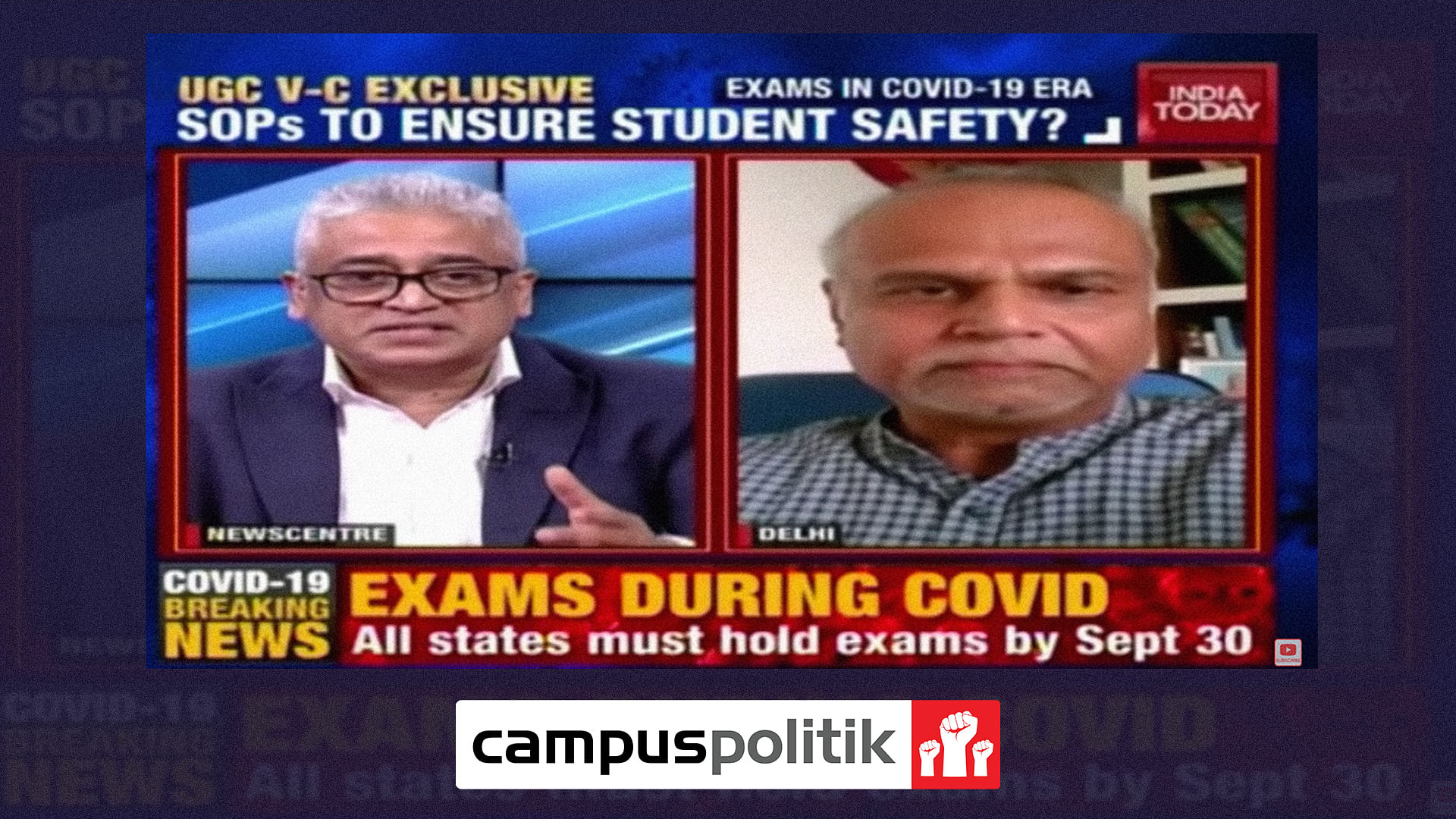