Everyone wants to make hay while Sudarshan News shines

How a cast of characters are using the hate speech petition against Sudarshan News to control, compete and confuse.

The Supreme Court has heard petitions on the notorious “UPSC Jihad” for more than a week now. Sudarshan News and its chief editor Suresh Chavhanke have been chided by the court for the show’s inflammatory content in quotable terms: “divisive propaganda”, “insidious”, and “rabid” are some of them.

The 10-episode series wants to show how Indian Muslims have conspired to infiltrate the civil services. This purportedly involves a series of mythical systemic advantages and funds from “terror-linked organisations”. For all his claims of “investigative journalism”, many of Chavhanke’s claims — especially his allegations against the Zakat Foundation — have been borrowed from an article that appeared in Firstpost in late August, authored by one Sam Westrop from the not-so-reliable Middle East Forum.

The top court has not been persuaded by the free speech arguments of the Hindu nationalist channel. On September 18, it asked Sudarshan News to file an affidavit on how it would blunt the show’s egregious edges and “assuage” the court. The temporary injunction on “UPSC Jihad” remains and more hearings are to follow.

However, the case has also become a turf for a cast of characters to push their own interests. Two of these are respondents in the main petition: the Centre and the News Broadcasters Association, or the NBA, a private body that represents news broadcasters. The third character is the BJP-patronised blog OpIndia.

While the Centre is rallying to control digital media, the NBA is using the case to bring the entire TV media under its fold. OpIndia, unsurprisingly, is cawing to confuse the invocations of hate speech and make a quick buck out of it.

In an affidavit filed with the Supreme Court in the Sudarshan News matter, the Centre pushed for regulating the digital media, “a parallel media which is going on with wider reach and impact.”

This manoeuvre is a red herring. On September 18, the top court had asked the Centre to file an affidavit on how it would ensure a “vibrant” mechanism of self-regulation in the media. Since the context was a “rabid” show on a news channel, it is safe to assume that the court meant self-regulation in the TV media, not print or digital.

The Solicitor General had expressed hesitation about this direction. He told the court that it should not make a foray into self-regulation territory since the matter was already pending before another bench. He was referring to a petition on the “communalisation” and “demonisation” of the Tablighi Jamaat gathering in Delhi in April by “certain sections of print and electronic media”.

The top court, however, did not budge.

And yet, in its affidavit filed this week, the Ministry of Information and Broadcasting gunned for digital media. It made questionable claims about self-regulation in the world of TV news to arrive at the larger point: that digital media is an unregulated wilderness that needs to be tamed.

In its affidavit, the Centre told the court that the self-regulatory mechanism at NBA and its rival the News Broadcasters Federation — both non-statutory, voluntary bodies — is “by and large, effective and ensures impartiality”. This is patently false, but more on that later.

The Centre has no interest in installing a self-regulatory mechanism on TV news media. The Centre already regulates this media and the consequences are before us — the bullshit is relentless and everywhere.

Digital media, while no sanctuary of sanity, still contains independent media outlets that report critically on the Modi government. One suspects that regulating digital media is an attempt to regulate anti-establishment journalism. When the Centre’s affidavit says that the digital media is “spreading venomous hatred” and instigating not only “violence but even terrorism,” it is not talking about OpIndia, but outlets like the Wire, Caravan, Scroll or the Print, which are targeted regularly on social media by apparatchiks at PIB Fact Check.

The Centre is facing loaded curveballs for its mishandling of the Covid-19 crisis, the tumbling economy, and the botched-up probe into the Delhi riots. As Shekhar Gupta remarked a couple of years ago, the need to regulate the media only comes up when the governing party is in trouble, not when it is winning elections.

In its affidavit to the top court, the NBA asked that its code of ethics be included into the “programme code” of the Cable Television Networks Rules, 1994, to make it “binding on all news broadcasters, irrespective of membership of NBA”.

This is a strange request for a private body. The TV news media in India does not follow the “programme code”, nor do NBA members live by their own code of ethics. Its members are known to yelp “screw you” and walk out, rather than pay fines and apologise.

In its affidavit, the NBA added that the News Broadcasting Standards Authority — or NBSA, the regulatory body under the NBA — may be granted recognition by the court so that complaints against all news channels are binding and enforceable.

Why would the court grant recognition to such a body? The NBA’s declared objective is to “promote, help, encourage, develop and secure interests of news broadcasters in the Indian television industry”. Its real anxieties are about its collective interests and not the content. Sometimes it gets personal. Recently, NBA chief Rajat Sharma went after news channel TV9 alleging “corrupt practices” because of its rising ratings. He is also the editor and chairman of India TV which had been upstaged by TV9, a close competitor, in the BARC ratings just days before.

The NBA with its messy house is effectively asking the court to allow it to take over the entire neighbourhood — about 280-300 news broadcasters in India that lie outside its fold. The NBF — basically the NBA with a superior Hindu nationalist script — is no good either, but at least it has better representation of regional channels.

Fortunately, the Supreme Court too is sceptical about the body. During the September 18 hearing, it called the NBA “toothless”. “We're not toothless. We make channels apologise,” its counsel intervened. Justice Chandrachud shot back: “Do you watch TV or not? Why haven't you controlled what's going on on TV news?”

OpIndia on the nature of reporting

On September 21, misinformation blog OpIndia and two others filed an intervention application in the top court in the Sudarshan News case. One of the two other parties is the Upword Foundation, whose cofounder, Ashish Dhar, was seen wondering why Hindus did not beat up Muslim protesters at Shaheen Bagh days before the Delhi riots.

The “news website”, as OpIndia calls itself, argued that the Supreme Court’s limited jurisdiction did not allow it to put a stay on a news broadcaster. Additionally, it argued that “UPSC Jihad” did not deviate from the “contemporary standard of religious reporting” — that news channels have been misrepresenting “Indic communities” (read: Hindus) all along — and that Sudarshan News only conformed to those standards and applied it to Muslims.

In short: If targeting religious groups is okay for other channels, it should be okay for Sudarshan News.

The implication here is that the Supreme Court turned a blind eye while the mainstream media was bedeviling “Indic” people and their faith for years. But when it came to Muslims, it imposed an injunction. To prove this, OpIndia — which has a record of 25 instances of false news and 14 instances of misreporting in the past two years — also attached a 50-page document titled A Study on Contemporary Standards in Religious Reporting by Mass Media.

None of this is surprising for a fake news portal that has the BJP managing its monetisation. But its intervention is meant to muddy the waters and obfuscate a petition that can stop a roguish channel and with it, a poison that has pervaded the news airwaves in India, with which OpIndia is more than familiar. Given the website’s relentless coverage of its own application in the Supreme Court, it's attempted intervention is also a dance of self-promotion.

The next hearing in the matter is scheduled for September 23. 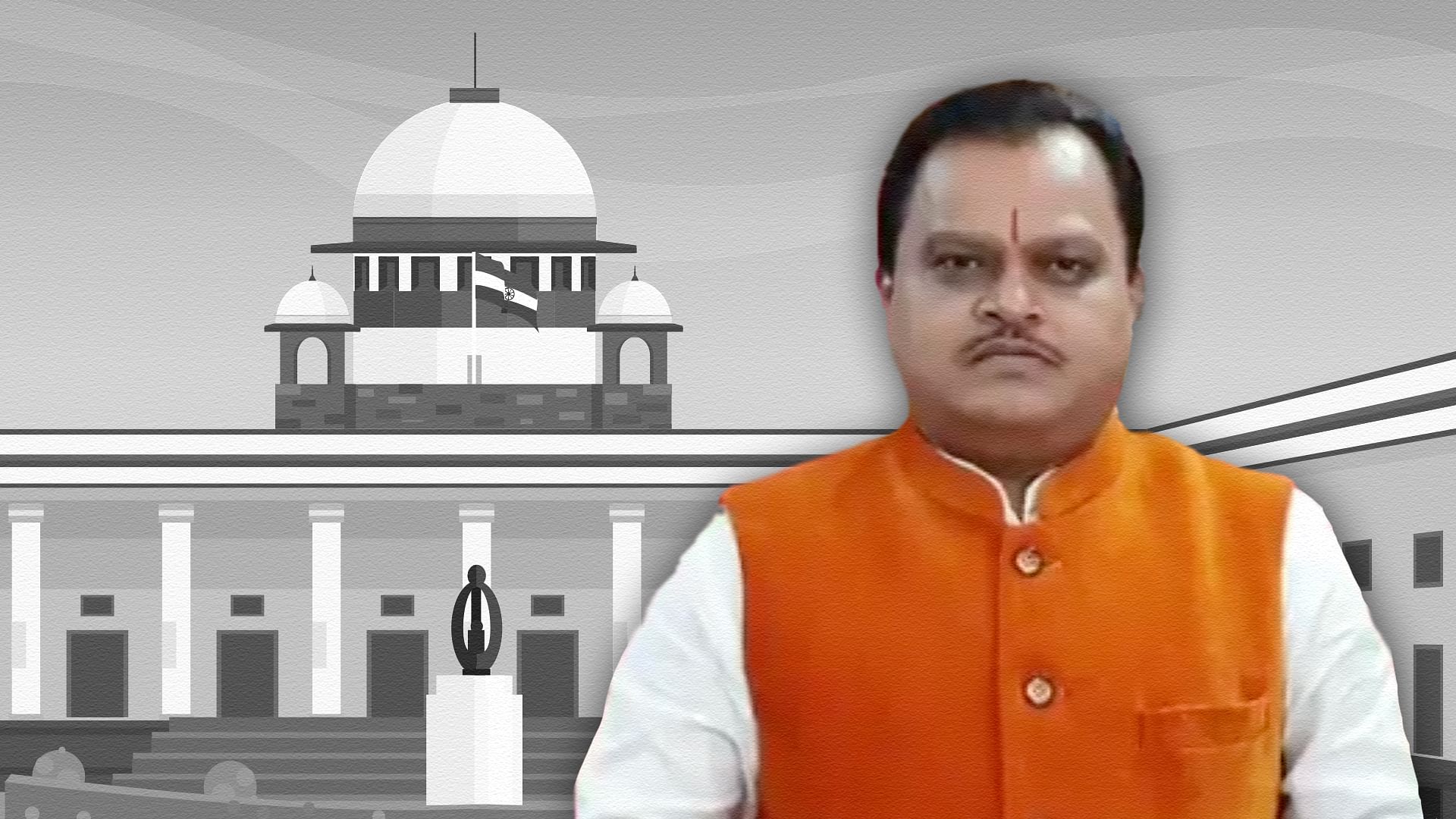 ‘Fact-based journalism, but we could be wrong’: Sudarshan TV’s strange day in court