‘Modi and Shah were kids when we fought for India’: At Singhu protest, ex-soldiers denounce Naxal jibes

BJP leaders, and their admirers in the media, have alleged that the farmer protests are backed by ‘Maoist and anti-national elements’.

Joginder Singh describes the ongoing farmer protests as the third war of his life. The 75-year-old former subedar of the Indian army fought two wars as a young soldier. He was injured in Kashmir’s Uri sector in 1965, and was stationed in Port Blair when the Americans sent the nuclear-powered seventh fleet into the Bay of Bengal in December 1971, when the Indian military was fighting Pakistani forces in what would become Bangladesh. Today, he is stationed at the Singhu border.

“The Indian government has been handing over resources to the corporate sector since the 1990s,” said Joginder, who served in the Army for 28 years until 1991. “Now they want to hand over farmers’ land to the private sector. I’ll only go home after winning this war too.”

Joginder and his fellow protesters sit and sleep on mattresses spread out under a yellow tent on the Grand Trunk road. The old man, who hails from Amritsar, sports a black turban and a ready smile, a red hammer and sickle badge of the All India Kisan Sabha, the peasant front of the CPIM, pinned to his chest. The badge is tucked above the shirt pocket from which he furnishes an old photo. It shows former president R Venkataraman shaking hands with the subedar moments after decorating him.

“It is from 1988. I was posted at the Red Fort then and used to train railway employees,” Singh recalled. “After I retired in 1991, we continued residing in West Delhi because of the militancy in Punjab. When I returned home a few years later, I took to farming.”

Last week, union minister Piyush Goyal alleged, without evidence, that the ongoing protests against the new farm laws had been infiltrated by “Naxal and Maoist elements”. This was lapped up by the pro-government media, such as Zee News, which claimed the protests had been “hijacked by anti-national forces” and “foreign powers”. On December 14, Madhya Pradesh agriculture minister Kamal Patel called the protesting farmers “sellouts” and their unions “anti-national”.

We asked subedar ji, as Joginder is affectionately called by those who know him, what he thought about the “anti-national” and “Naxalite” labels.

“Narendra Modi and Amit Shah were children when we fought wars for this country,” he replied. “So if they call patriots like me Naxali, then why should we even answer them? It is like mocking a priest about his mantra. Or lecturing a farmer about agriculture, as they’re doing. They should be ashamed of themselves.”

He continued: “Having fought for my countrymen, such jibes make me feel the countrymen are now mocking me. It is absurd. We are here to fight for what is ours, and we will only return after these bills are cancelled.”

Protesters at the Singhu border on Monday.

The army veteran argued that the Modi government's rhetoric came from a state of confusion: how can farmers wear good clothes, eat good food, and stand up for their rights?

“They lack the brains,” Singh remarked, referring to the government. “If there were Naxalites in this protest, why would have I joined it?”

Protesters at the Singhu border on December 14.

Iqbal Singh, 50, retired from the army only last year. He served for exactly 30 years. Since November 26, Singh has been living inside a truck at the Singhu border in the good humoured company of four other farmers. Putting up in tents in his army days, he said, has made it easier to adjust to this makeshift highway home.

Hailing from rural Amritsar, Iqbal retired as a subedar, having served not only in all four corners of India but even in Sudan as part of a UN peacekeeping mission in 2010. During the Kargil conflict in 1999, he was in the reserves.

“If we were Khalistanis, why did you make us serve for 30 long years in the army?” Singh asked. “Our sons are in the army now, what will you tell them? Put them behind bars? We will ask our sons to quit and go to jail if they are Khalistanis.”

For Iqbal, the Modi government has done only one good thing in its entire tenure: it has united farmers who were divided by politics, particularly the farmers of Punjab and Haryana. “Have you ever seen a movement this big? This protest is spread over 40 km,” he added.

Iqbal admitted that he felt bad when the government called him and his fellow protesters “anti-nationals”. “We served the country and diligently fulfilled our duties as army officers, whatever the circumstances,” he said, adding that such comments by senior leaders such as Goyal were ominous, not least because they had been placed in power by farmers like him.

The army veteran didn’t have a good opinion of the prime minister, and it was formed early on. “What he did in his own state was wrong,” Iqbal said, referring to the anti-Muslim pogrom in Gujarat in 2002. “In the army cantonment, we sat and talked about these things. There were very intelligent officers there. We knew about his proximity to big corporations. If he came to power, we thought, he would sell the country.”

A makeshift kitchen set up by the protesting farmers at Singhu.

Not too far from Iqbal’s truck, Gursev Singh, 60, soaked under the warm December sun. An armyman from 1979 to 1997, he served in Nagaland, Guwahati, Uri, Meerut, among other places, in his 18 years in the armed forces.

Gursev, unlike the two subedars, does not have many words to express his contempt for Goyal’s “Naxali jibe”. When we asked him about it, he merely quipped, “Yahan aake bolega toh lapdi khayega.” If he comes here and says it, he’ll get a slap.

“What he said does not matter,” he added, referring to the minister. “A dog’s tail is always crooked.” 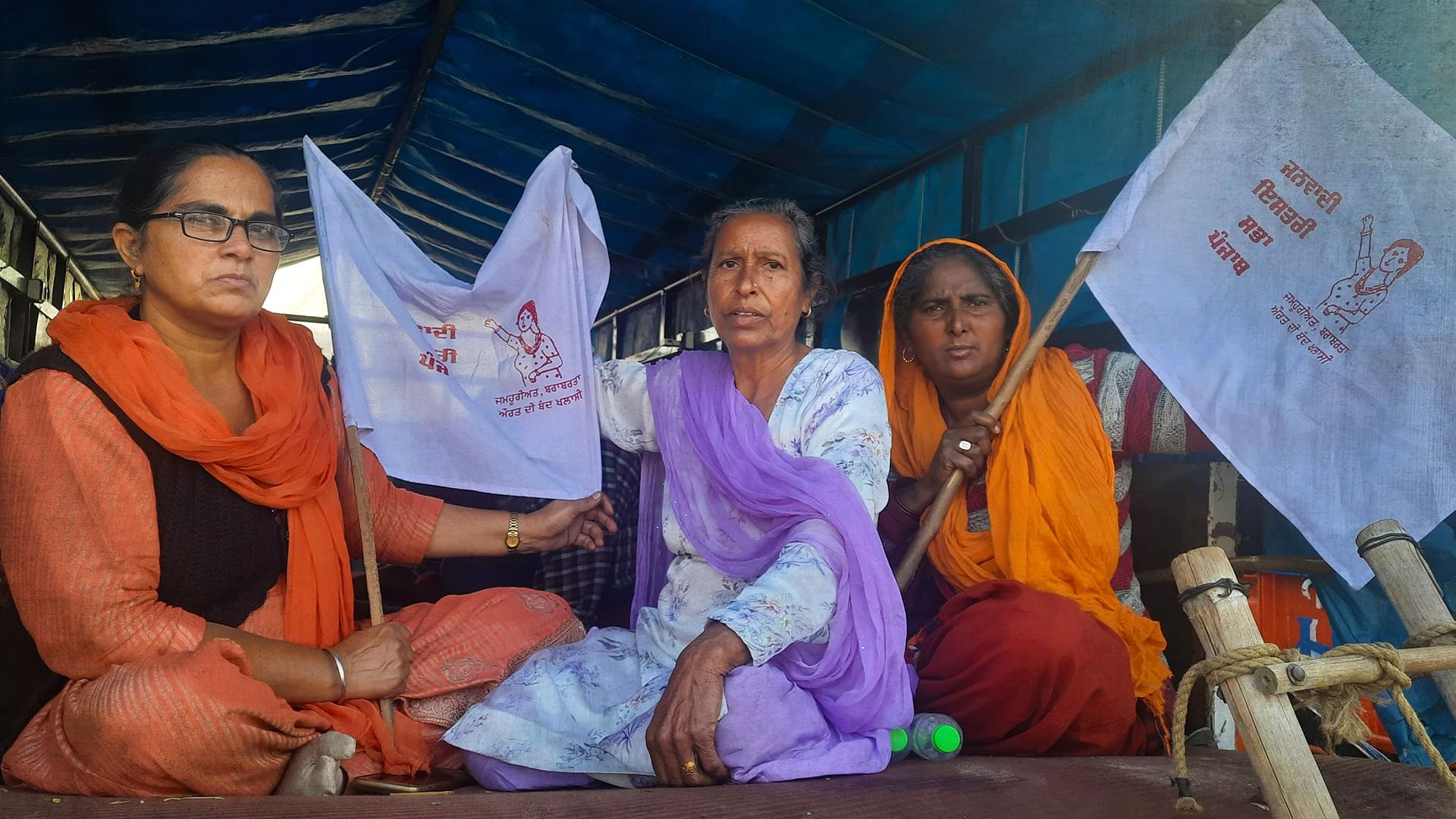 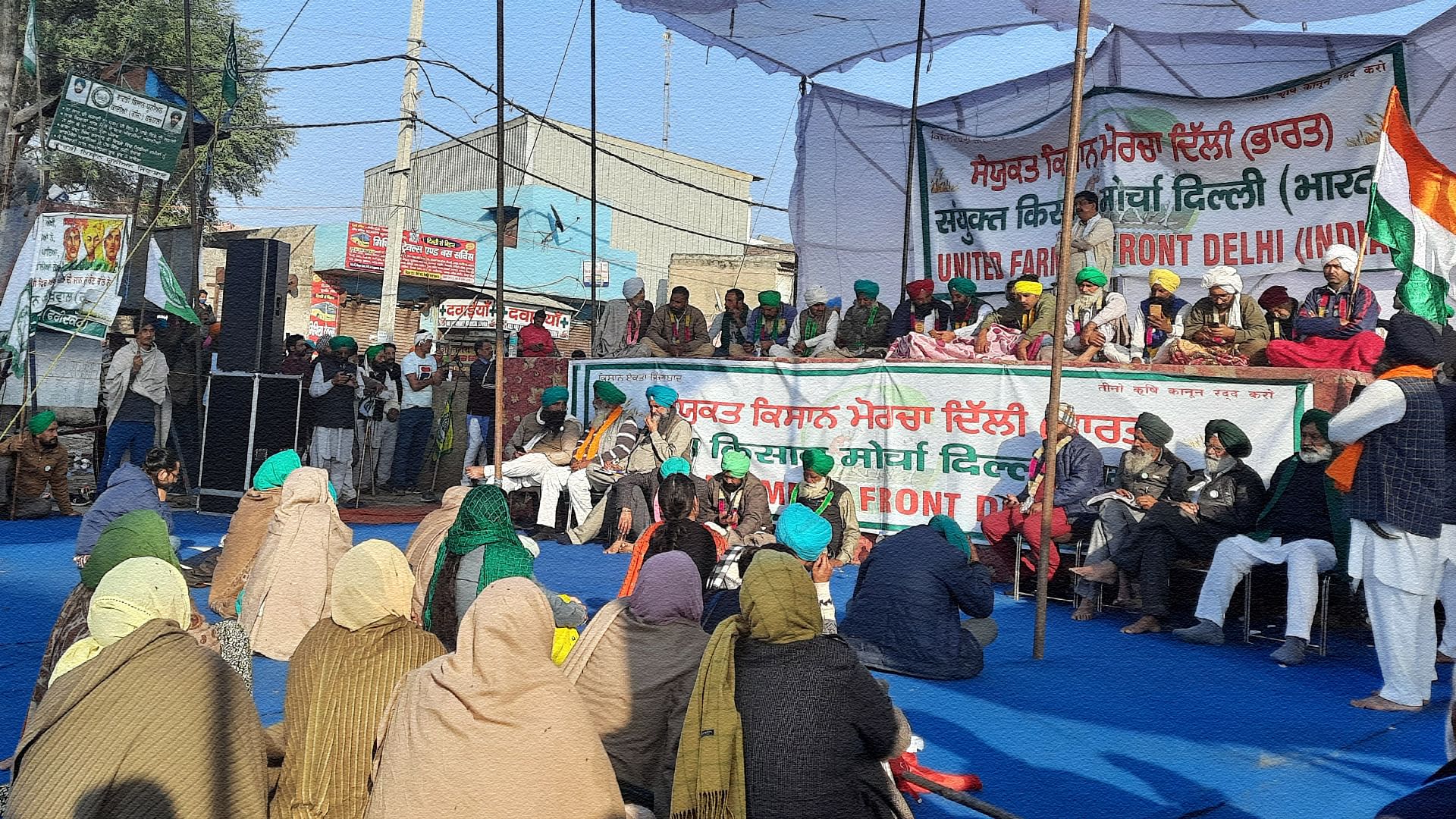