Pakistan’s ISPR made up a story of Khalistani hand in farmer protests. Indian media lapped it up

Sections of the media and the BJP have peddled this conspiracy theory for two months now without offering a shred of concrete evidence.

On January 12, attorney general KK Venugopal told the Supreme Court that “Khalistanis” had “infiltrated” the farmer protests along Delhi’s border. An affidavit would be filed in this regard, Venugopal said, based on inputs from the intelligence bureau.

While the court did ask Venugopal to prove his allegation, that the “Khalistan” story, which began as a baseless claim pushed by sections of the mainstream media, has found its way to the highest court of India in the first place is astounding. The theory claims that groups campaigning for the secession of Punjab – and the formation of a Sikh homeland, Khalistan – are orchestrating the farmer protests.

Three days ago, the National Investigation Agency summoned and slapped notices on several prominent people involved in the protest.

But this theory didn’t come out of nowhere. Incredibly, it seems to have originated in Pakistan. And sections of the Indian media, Hindutva groups, and even the Bharatiya Janata Party picked it up unquestioningly.

The seeds of this conspiracy theory were sown back in August, according to the Disinfo Lab, which investigates “fake news and propaganda”. According to their investigation, the Khalistan narrative of the farmer protests was born mainly in Pakistan, pushed by social media groups sponsored by the Inter-Services Public Relations, the media and PR wing of Pakistan’s armed forces.

It was then peddled by Pakistani “influencers” such as actor Veena Malik.

On August 15, Malik posted a photo of a farmer holding a poster that read “We want Khalistan”. She wrote that Indian citizens must “demand a separate homeland” for its Sikh farmers.

Unemployment, drugs, and water-related issues have forced Sikh farmers to commit suicide. Every Indian citizen must stand up for their brothers. They must demand a separate homeland through peaceful referendum. #Khalistan pic.twitter.com/90vONrGllQ

Fact-checkers pointed out that the photo was fake: it was taken in 2013 on the 29th anniversary of Operation Bluestar. However, Malik’s tweet was retweeted nearly 500 times, including by accounts that support Pakistan’s governing party, the Pakistan Tehreek-e-Insaf.

According to Disinfo Lab, despite this theory originating from India’s “mortal enemy”, Hindu nationalists in India – referred to as “useful idiots” in the report – still fell for it. And once the narrative found an audience in India, it took on a life of its own.

As retired Supreme Court judge Madan Lokur told Newslaundry, in the context of Venugopal’s comments to the Supreme court, “It’s difficult to say whether we are witnessing a tragedy or a farce.”

Here’s a chronology of how the “Khalistan” angle, which began in Pakistan, gained momentum in India .

On November 26, farmers protesting against the Narendra Modi government’s three new farm laws marched on Delhi. They were met with force by police along the way, and barred from entering the capital. So they camped along Delhi’s border and have been there ever since.

On November 27, a video from the protests went viral on social media. In it, a farmer is heard saying, “Indra tok di” or “Indira was knocked off”, referring to the 1984 assasination of Indira Gandhi by her Sikh bodyguards.

Zee News wasted no time in running a segment on the video, playing it on loop. The channel’s anchor, in conversation with Shiromani Akali Dal leader and former central minister Harsimrat Kaur Badal, tried to establish the farmer protests had been “taken over” by violent infiltrators.

That evening, Zee News editor-in-chief Sudhir Chaudhary ran the same story on his primetime show. Using the hashtag #AndolanMeinKhalistan, Chaudhary played the clip on loop alongside a video from Punjab’s Barnala showing farmers purportedly raising pro-Khalistan slogans. Chaudhary suggested the presence of a “Khalistani hand” behind the protests.

Not to be left behind, Amit Malviya, who heads the BJP’s IT cell, tweeted the same clip and accused the Congress of aligning with “radical elements”. He got nearly 2,000 retweets and multiple responses demanding that the person in the video be arrested.

Some of the commentators claimed the man was not a Sikh farmer from Punjab but a “Muslim” – a claim that was swiftly debunked by Alt News. The fact-checking platform noted that this theory – of a Muslim man “disguised” as a Sikh farmer at the protests – was first shared by a Twitter user called Kunwar Ajay Pratap Singh, who is followed by Narendra Modi and Amit Shah.

But the damage was done. Other Twitter users started claiming the protest was not for farmers but a movement for Khalistan. BJP leaders such as Tajinder Bagga swiftly seized this theory; his tweet had over 8,000 retweets at the time of writing this story.

And that’s how the conspiracy theory of a “Khalistan” hand behind the protests took root.

The next day, on November 28, another video went viral.

It showed Deep Singh Sidhu, an actor who was at the protests at Singhu, eloquently explaining to security forces that the farmers’ movement was a revolution to reckon with. “If they are not going to understand the seriousness of this matter,” he said, referring to the government, “then, trust me, it’ll define the next political structure of the entire geopolitics of this country.” The Hindutva blog OpIndia promptly labelled Sidhu a “Khalistani sympathiser”.

But it wasn’t just scattered Hindu nationalist opinions. Barkha Dutt, a prominent mainstream journalist, interviewed Sidhu on Mojo. Starting off with the farmer protests, the conversation took a turn for the worse and became a heated debate on Jarnail Singh Bhindranwale, the Khalistani militant leader who is called a terrorist by the Indian state, although many in Punjab, Sidhu included, regard him as a political hero. Sidhu refused to call Bhindranwale a “terrorist”, despite Dutt urging him to do so. Dutt later tweeted that Sidhu’s words had “hurt” the cause.

Unsurprisingly, the interview went viral, buttressing claims that the farmer protests had been infiltrated by “pro-Khalistan” elements. Twitter users like Priti Gandhi, who handles social media for the BJP Mahila Morcha, tweeted excerpts of the interview, saying the fact that Sidhu, whom she described as the “face” of the farmer protests, supported the Khalistan movement was “very dangerous”.

Meanwhile, sections of the media continued with their “Khalistan” stories. After three days of relentlessly calling the protests a “Khalistan movement”, Chaudhary complained that his channel was being trolled for calling out the “Khalistani elements”. Over the next few weeks, though, his channel changed tactics, shifting to suggestions that the “innocent farmers” needed to be “saved” from these “Khalistani infiltrators”. Between November 26 and January 15, Zee News hosted over 20 debates on the “Khalistan infiltration”. It was not alone, joined in peddling the Khalistan theory by Aaj Tak, Republic Bharat, and Times Now.

As sections of the media diligently kept pushing this conspiracy theory, BJP leaders laid the groundwork for them.

On November 28, Haryana chief minister Manohar Lal Khattar claimed that his government had “inputs” on the presence of Khalistani elements at the farmer protests. Till date, these “inputs” have not been made public.

On November 29, the party’s Uttarakhand chief, Dushyant Kumar Gautam, said in a press conference that the protests had been “hijacked by pro-Khalistan and pro-Pakistan elements”. He also claimed these “separatists” would be arrested soon.

The same day, Malviya accused Delhi chief minister Arvind Kejriwal of wanting to “burn down Delhi” now that “Khalistanis and Maoists have stepped in”. The next day, senior BJP leader Ram Madhav tweeted an article headlined “Is Khalistan the reason for farmers’ march to Delhi?”

Not one of them offered any evidence. Contradicting their allegations, home minister Amit Shah cryptically said during a speech in Hyderabad that he had “never called the protest...political” and that he was “not saying that now either”.

Shah’s statement though didn’t stop his party’s leaders from continuing to push the conspiracy theory. Some of them merely omitted the word “Khalistan” while making the same allegation.

On December 3, for instance, Sushil Kumar Modi declared that the protests had been “hijacked” and now resembled the “Shaheen Bagh model”. Union agriculture minister Narendra Singh Tomar said the movement had been infiltrated by “Leftist and Maoist elements”, as did railways minister Piyush Goyal; law minister Ravi Shankar Prasad blamed the “tukde tukde gang” for this “infiltration”.

By mid-December, farmer leaders were asking the government to “stop maligning” their movement.

Meanwhile, the special cell of the Delhi police claimed to have arrested five suspected terrorists in Delhi, two of whom had links to Khalistani groups and the rest to Islamist organisations.

By the end of December, however, a rift had appeared in the BJP. Chaudhary Birender Singh, a senior leader of the party from Haryana, extended his support to the farmers. “Those who are saying such things need to prove the allegations,” he said, meaning the Khalistan allegations. “Else they should apologise to the farmers and take back their words.”

Rajnath Singh, the defence minister, also shoved his oar in, saying “kisan kisan hai” – a farmer is a farmer – and that terms like “Naxals” and “Khalistanis” should not be used against them.

It was in this backdrop that Venugopal told the Supreme Court that Khalistani elements had infiltrated the protests. He based his allegation on the fact that the pro-Khalistan group Sikhs For Justice, or SFJ, had offered to fund the protests.

On January 16, the National Investigation Agency summoned around 40 people to be examined as “witnesses” in a case filed against the SFJ. According to the NIA, the SFJ – an “unlawful association” that is banned under the Unlawful Activities Prevention Act – has been collecting “huge funds” abroad for “on ground campaign and propaganda” that is being “spearheaded by terrorists”.

Yet, in the 50 days since the protest made its way to Delhi’s border, no concrete evidence has been provided to link it with “Khalistani elements”.

Lokur summed it up when he told Newslaundry, “The tragedy is that such a serious allegation has been made and for more than a month our national security agencies have done nothing about it except float balloons. Isn’t it a shame? Now, unfortunately, an affidavit will be filed with documents in a sealed cover but the so-called rogue elements will not be disturbed and the vilification campaign will continue. Why are our national security agencies not doing anything, if what they believe is true?” 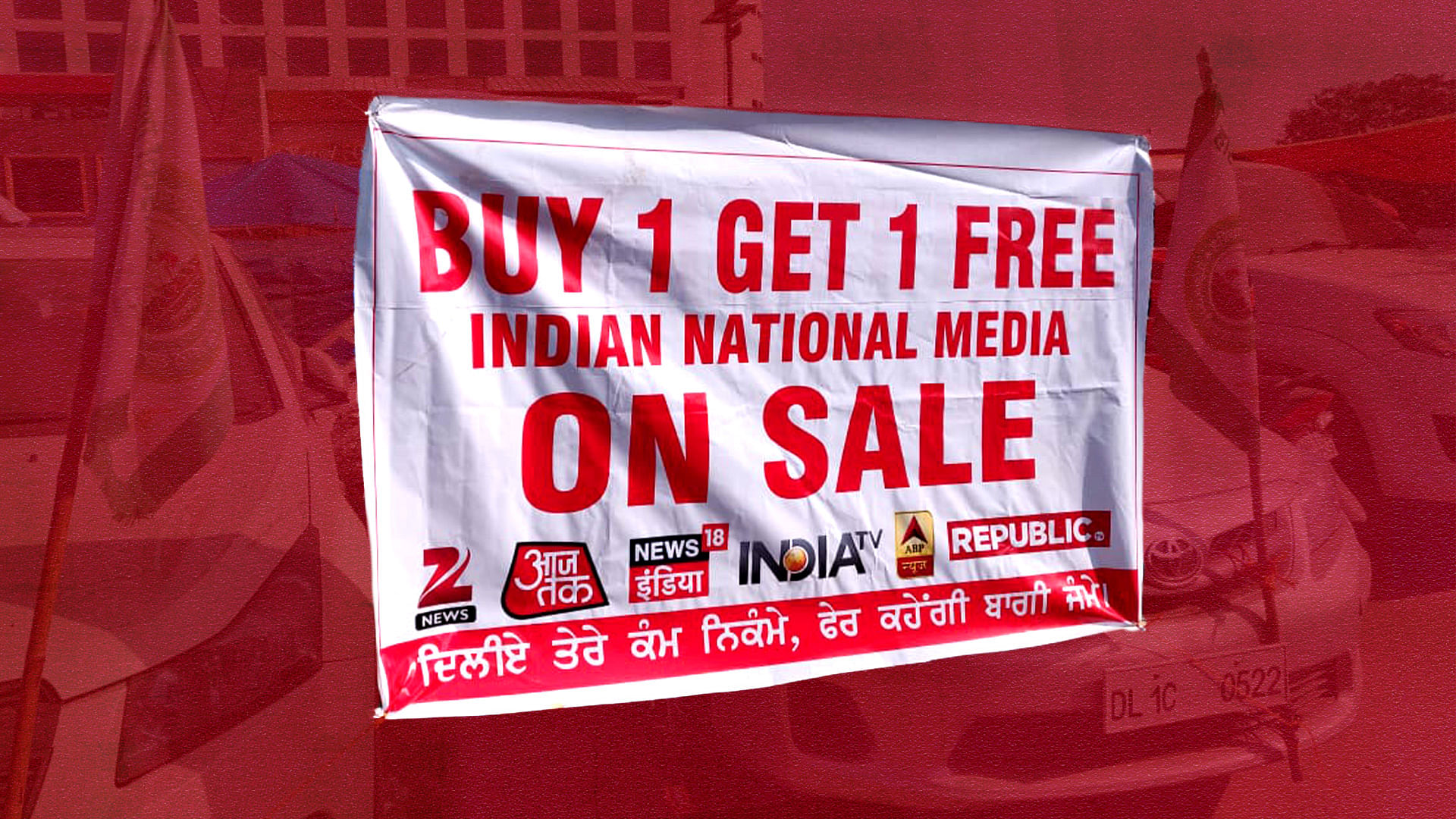 Reclaiming the narrative: What farmer protests and Trolley Times tell us about the media’s systemic failure