‘I fought 3 wars for this country and they call me a terrorist’: Why Gurmukh Singh won’t forget his humiliating arrest

The 80-year-old army veteran was beaten, humiliated, and jailed for 15 days for protesting against the farm laws.

Five hours from Delhi, in a village called Fatehgarh Sahib in Punjab, Gurmukh Singh, 80, with the help of a few youngsters, logged onto Zoom. As soon as his face appeared on the screen, he burst into a smile and said, “How are you my child? How is the protest going in Delhi? I am so happy you want to talk to me. Nobody is listening to us.”

The internet connection in his village is weak and we resume our conversation on the phone instead.

In late November when farmers arrived along Delhi’s borders to press for the repeal of the new agriculture laws, the Narendra Modi government proposed that they move their protest to the Nirankari Ground in Burari instead of blocking the highways around the capital. Farmer leaders rejected the offer, but a few of the protesters did set up tents on the ground. It was there that Gurmukh Singh was arrested on January 28.

He was released on bail on February 13. Gurmukh, who served in the Indian army for 22 years, is now back in his village.

“I will never forget this humiliation,” he said, starting his story.

On January 25, Gurmukh, along with 25 men from his village, set out for Delhi. Farmer leaders had announced that on January 26, Republic Day, the farmers protesting around Delhi would organise a tractor march. The Delhi police had granted them permission and charted out a route along the periphery of the capital. Nevertheless, on Republic Day, when a section of farmers made their way to Red Fort and hoisted the Nishan Sahib flag, violent clashes broke out between them and the police.

By February 1, according to news reports, the Police had arrested 122 farmers in connection with the violence.

Gurmukh had travelled to Delhi for the tractor march but didn’t take part in it. “The journey from our village wore me out. So, I was resting in our tent in the Nirankari Ground. I did not go for the tractor rally or to the Red Fort,” he said.

So why was he arrested?

For three days after the Republic Day rally, Gurmukh said, the police deployed at the Nirankari Ground had been intimidatingly telling the farmers to wind up their protest. In the evening on January 28, Gurmukh had just returned to the tent after helping out in the community kitchen when he saw a few policemen walk around the back of the tent and sit down. “We felt uncomfortable but we let it go,” he recalled.

At around 11 pm, as the farmers prepared to retire for the night, the electricity was suddenly switched off. Gurmukh came out of his tent, which he shared with several fellow farmers, when three-four policemen “caught him”.

“They pushed me to the ground, and whenever I got up they kept pushing me back down. They started hitting and dragging me away from my tent. I had all my belongings, my clothes and money in the tent. I caught hold of the leg of a police barricade so that they wouldn’t drag me and I told them that I wouldn’t leave the ground.”

At this, he said, the policemen started violently poking him with their lathis. They eventually managed to push him into a Delhi police bus where he was once again hit by two-three policemen.

“A few times I managed to get out of the bus. I didn’t want to leave without my belongings. Then a policeman got very angry and twisted my elbow. I’m old but not a very weak man. I used to wrestle a lot, so I managed to unhook my elbow from his grasp. While I was doing so I touched the policeman’s uniform. I wanted to keep him away so he wouldn’t hit me. But as soon as I touched his uniform, he started screaming for help and shouted that I was assaulting him and trying to tear off his uniform.”

Soon, more policemen arrived and pinned Gurmukh down. “I sat on the ground and yelled the police were misusing their powers, they couldn’t assault me like this.”

The policemen weren’t moved, he claimed. “Beat him up, arrest him,” they told each other.

He was eventually put back on the bus and driven to the Crime Branch’s office, and then to the Tihar Jail, where he spent the next 15 days.

The police filed an FIR against Gurmukh at the Mukherjee Nagar station and booked him under legal provisions related to assaulting a public official and violation of the Covid protocol.

The FIR records a statement by assistant sub inspector Harbans Lal. At 7.30 pm on January 28, the police officer claims, he was on duty at the Nirankari Ground when a group of nine protesters approached the main entry. He stopped them and asked why they were leaving the ground. The protesters replied that they wanted to go protest at the Red Fort. When he told them they couldn’t go to the Red Fort, they started arguing with him. “When I tried to stop them, they physically attacked me and tore my uniform. After shouting for help, my fellow policemen came to my rescue and took the 9 protesters in control,” the officer alleges.

His statement is backed up by another “duty officer”. “Upon hearing Harbans Lal’s shouts for help, I reached the source of the sound and saw that protesters were physically assaulting Harbans Lal, due to which his uniform got torn,” he is quoted as saying in the FIR. “With the help of fellow policemen, I got the protesters in my control.”

Of the nine protesters arrested that night, three were elderly men from Punjab.

Amarveer Bhullar is fighting Gurmukh’s case. He is part of a collective of lawyers under the banner of Samyukth Kisan Morcha Lawyers Collective that works with the Delhi Sikh Gurdwara Management Committee. On January 27, Amarveer, who is from Bathinda, Punjab, but practises in Delhi, listed his phone number on social media saying he would be available to farmers for legal aid.

“On January 28, my phone was ringing off the hook. Family members at the protest sites and back in villages were asking me to help find their relatives who had gone missing. I started compiling a list of the missing people. I went to jails and hospitals to see if I could find them there. That’s how I found out about Gurmukh Singh and the eight others arrested with him,” Amarveer said.

In 2016, to safeguard the rights of accused, the Supreme Court had directed that an FIR must be uploaded on police or government websites within 24 hours of registration. Section 207 of the CrPC mandates that whenever a police case is registered, the copies of all the documents, including the FIR, must be handed over to the magistrate, who without delay must furnish the copies to the accused.

Yet, it took Gurmukh’s lawyer two days to get the FIR. “None of the FIRs in such cases were uploaded on any website and the magistrate hadn’t received them either,” said Amarveer. “We kept running from jail to jail trying to locate which station the FIR had been lodged in and where the person was being held. Finally we managed to get our hands on the FIR through our own sources within the police.”

On February 9, Gurmukh’s bail plea was rejected on grounds that the police’s investigation was still on. Three days later, however, he was granted bail by a Rohini court on the grounds that he was an aged man with no prior cases against him and that the investigation “recovered nothing”.

Gurmukh is back in his village now. “The police called me a terrorist. I served in the army for 22 years,” he recounted. “This is what I have to hear before I die?”

Gurmukh was recruited into the army during the 1962 Indo-China War. After his training, he was stationed at the Nathu La pass in Sikkim until the two nations announced a ceasefire in November 1962. He fought in the India-Pakistan war in 1965 and the Bangladesh Liberation War six years later.

“I am not able to sleep at night these days,” he said. Recalling his 15 days in jail he said the toilets overflowed with feces. Whenever he asked for them to be cleaned, he said, he would hear the guards say, “He should be kept here itself. Teach him a lesson.”

“I wrestle, I know boxing and I am a strong kabaddi player. I was given a lot of love and respect in the army. I fought three wars for this country. I have been awarded 10 medals and now they are calling me a terrorist. I cannot swallow this humiliation.” 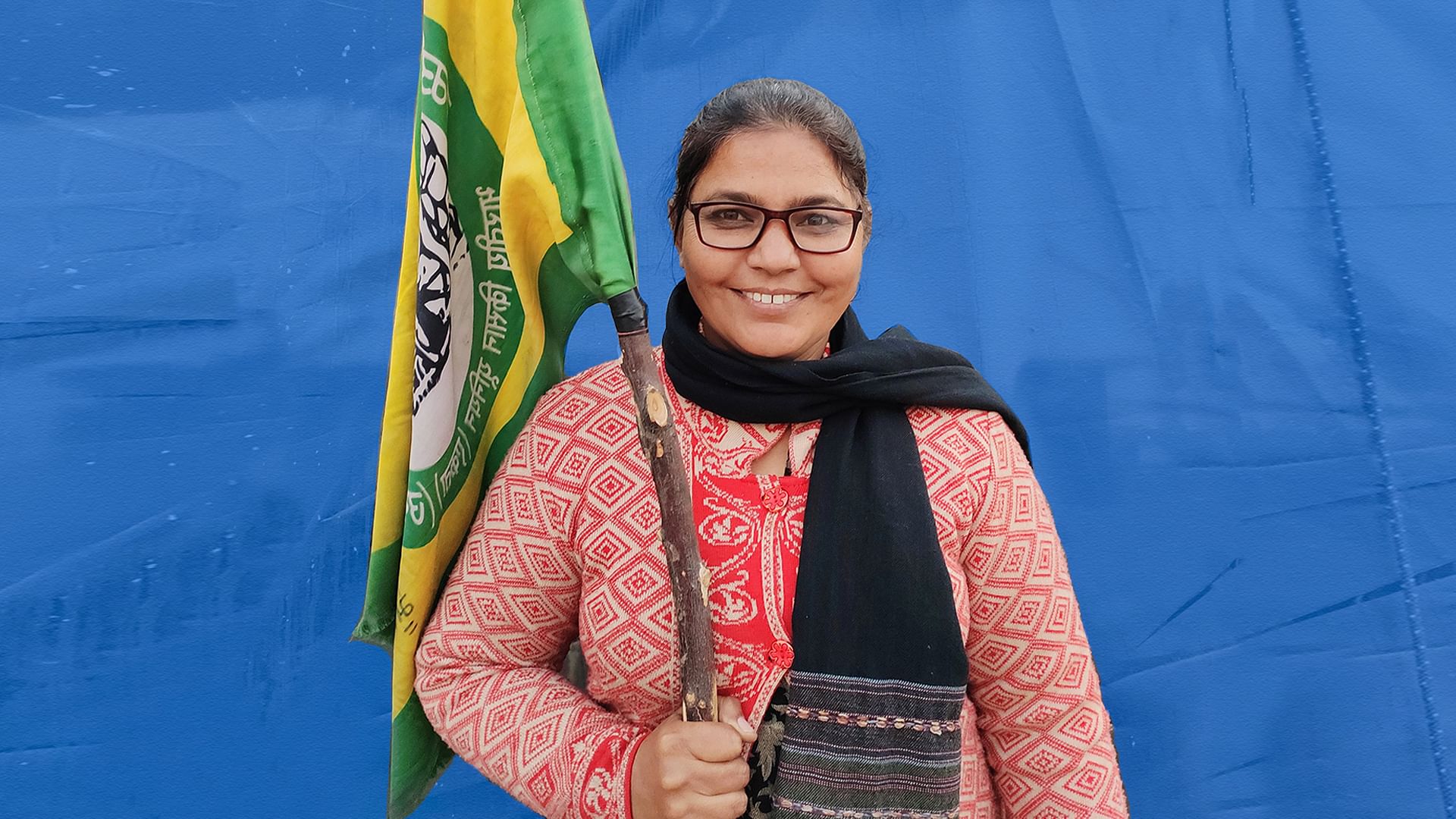 Protest on wheels: Meet the farmer who cycles around Singhu to lift spirits