The violence, which claimed 20 lives, is horrific enough without giving it a Hindu-Muslim spin.

On Sunday night, within hours of Trinamool Congress chief Mamata Banerjee’s spectacular return to power, a group of alleged TMC supporters attacked the resident of Kamal Mandal. Mandal is the president of the Bharatiya Janata Party unit for booth 171 in Jagatdal constituency of North 24 Parganas district; the TMC won the Jagatdal seat on Sunday.

Mandal and his wife were beaten with bamboo sticks. His 80-year-old mother, Shobharani, tried to intervene but was hit too. All three were later hospitalised and Shobharani succumbed to her injuries.

At Hooghly’s Khanakul, whose assembly seat the BJP won, alleged BJP supporters attacked the residence of a TMC worker, Debu Pramanik, in Nasibpur on Sunday night. They beat him and returned the next day to thrash him again. Pramanik was taken to a hospital where he died.

There are just two of the 20 deaths reported in Bengal due to alleged political violence after the election results were declared. The TMC returned to power for a third term with the highest mandate it ever achieved, while the BJP bagged 77 seats and established itself as the principal, perhaps only, formidable opposition.

Citing the violence inflicted on their supporters and party workers, the BJP carried out an extensive campaign on social media. Prominent BJP leaders and personalities demanded everything from the imposition of President’s rule in the state to the deployment of central paramilitary forces.

Some leaders also alleged that during the violence, Hindus were being attacked by Muslims.

On the ground in Bengal, the violence claimed victims across political parties. Out of the 20 deaths, the families of nine claimed they were BJP supporters, while the families of eight others said they were TMC supporters. Of the remaining three victims, one was a member of the Indian Secular Front, one a CPIM member, and the other had no political affiliations.

At Samaspur area in Raina assembly seat in Purba Bardhaman district, a TMC supporter, Ganesh Malik, was attacked with sharp-edged weapons. He later died in a hospital. Malik’s son alleged that BJP supporters attacked him without provocation.

In Nabagram in the same district, home to Jamalpur constituency, a clash broke out between TMC and BJP workers. Two TMC supporters, Bibhas Bag and Shah Jahan Shah, and a woman, Kakali Kshetrapal, died. The BJP claimed Kshetrapal was the mother of their local organiser, while the CPIM claimed she was a leader of their women’s party wing and worked as polling agent. In Ketugram in the same district, Shrinibas Ghosh, a TMC member of a gram panchayat, was allegedly lynched by BJP supporters.

The TMC won in both Raina and Jamalpur constituencies.

In Kolkata’s Beleghata, a BJP worker named Abhijit Sarkar was allegedly lynched by TMC supporters. At Chakdah assembly constituency in Nadia district, BJP worker Uttam Ghosh died of his injuries after being beaten by sticks. At Bolpur in Birbhum district, BJP worker Gourab Sarkar died in an attack by alleged TMC workers on Tuesday.

In Cooch Behar’s Dinhata, BJP worker Haradhan Roy was allegedly killed by TMC supporters. The BJP won Dinhata by a margin of 69 votes. Another BJP worker from the same area, Chandan Roy, who had suffered injuries on Monday, died on Tuesday night. In the same district, BJP worker Mintu Barman who was attacked with sharp-edged weapons on Monday, succumbed to his injuries on Tuesday.

At Sonarpur in South 24-Parganas district, BJP supporter Haran Adhikary died after sustaining injuries during a clash with TMC supporters. The clash started after local TMC workers allegedly tore some BJP flags, according to local residents of Pratapnagar Metiyari area who spoke to this reporter on the condition of anonymity.

While the BJP has also claimed that Sitalkuchi resident Manik Moitra, who died on Monday of a bullet injury, was their supporter, his family members have denied any political affiliation.

On the other hand, Gopal Patra, a resident of Choutara area within Tarakeswar constituency in Hooghly district was shot from close range. He died at the district hospital in Chinsurah on Tuesday night, Shukhchand Patra, who was accompanying him, was still at the hospital in critical condition on Wednesday evening. At Tufanganj in Cooch Behar district of north Bengal, TMC worker Shahinur Rahman died on Tuesday night of wounds from sharp-edged weapons. His body was found with his hands and feet tied. In Alipurduar, also in north Bengal, TMC’s booth unit president of Mathura area, Dipak Roy, was killed with daggers on Tuesday night.

At Duttapukur area, Hasanur Jaman, an Indian Secular Front worker, was killed when alleged TMC workers hurled bombs at him on Monday.

Simultaneously, another battle was being waged on social media, with the BJP pushing a communal angle to the violence. Muslims were attacking Hindus, they said.

The BJP’s Swapan Dasgupta, who contested and lost from Tarakeshwar, tweeted about “more than a thousand Hindu families” hiding from “marauding mobs”. He also said there were “reports of molestation or worse of women”.

Alarming situation in Nanoor (Birbhum district) with more than a thousand Hindu families out in the fields to escape marauding mobs seeking to take it out against BJP supporters. Reports of molestation or worse of women. @AmitShah please rush some security to the area.

“Since yesterday evening, it is being spread on Facebook and Twitter and some people with a particular political affiliation are forwarding and retweeting it,” he told the media. “They are saying women have been raped and many others moleste in Nanoor area. We have verified the claims and also spoke to local BJP leaders. This news is baseless. Even local BJP leaders said they were unaware of any such happening.”

Notably, Tripathi was appointed to his post by the Election Commission and had earned a great deal of praise on social media for speaking up to Mamata Banerjee during the election in Nandigram.

Later, a woman polling agent of the BJP told the media that “misinformation” was being spread on social media that she had been gangraped. She said the news was baseless.

However, an officer at Nandigram police station told this reporter that the video was not of a political clash but a personal dispute.

Priti Gandhi, the national head of the BJP Mahila Morcha’s social media wing, shared a video that was doctored. It showed a group of men wielding swords while dancing to the TMC’s electoral song, Khela Hobe. A 2020 YouTube upload shows the same video with different music.

Gandhi did not take down her video, which was also shared by BJP state unit member Abhijit Das. Das later deleted his post.

Others pushed this narrative too, suggesting that the violence was similar to the communal violence seen in Bengal ahead of Partition in 1947. BJP national president JP Nadda said it was “reminiscent of Partition days” while VHP Bengal spokesperson Sourish Mukherjee compared the atmosphere in Bengal to Direct Action Day, the Muslim League’s call in 1946 for a separate country of Pakistan.

Writer Abhijit Majumder shared the VHP’s press statement on Twitter, quoting a single line from it: “The Hindu society also has the full right to self-defence, which it will use.” “Yes it should,” Majumder wrote. Majumder also compared the violence to “jihadis celebrating Holi with blood”. He has over 547,000 followers on Twitter.

Incidentally, four of the five TMC supporters allegedly killed by the BJP were Hindus.

In West Midnapore district, a girl was found dead. Even before the police began their inquiry, social media users claimed she had been raped and killed by “peaceful masons from Murshidabad”. This reference is clear: Muslims comprise two-thirds of the population of Murshidabad district and many of them work as masons.

The district’s police officials told this reporter that the allegations were baseless.

“Even the postmortem report has not arrived and they got to know the religion of the rapists!” said a senior officer on the condition of anonymity. “We will take action against those spreading such news.”

Another Facebook user who claimed to live near the residence of the girl said in a Facebook post that there were attempts to use the girl’s death to create communal tension.

CPI-ML member Kavita Krishnan succinctly pointed out the issues in this narrative in a tweet.

1. Post poll violence in W Bengal is condemnable
2. Onus is on the newly elected, to take measures to stop it
3. Victims of violence include members of BJP, CPIM, also TMC
4. BJP is giving a communal spin to the WB verdict, & the violence
5. BJP spreading fake, provocative images

Actor Joyraj Bhattacharjee, a CPIM supporter, said, “There is no doubt that political violence is taking place and workers of the Left, the ISF and the BJP have all suffered in the hands of the TMC. But the BJP is playing an even dirtier game by trying to give this violence a communal twist. These incidents of political violence, which has remained part of Bengal’s political culture for many many years...There is not an iota of truth in the BJP’s campaign on communal lines.”

As things stand now, the onus of stopping this circle of violence squarely rests with the newly-elected government under Mamata Banerjee. Meanwhile, the state could do with a responsible opposition in the BJP that must refrain from running unsubstantiated social media campaigns and adding fuel to fire.

Update on May 6: This piece has been updated with new information on the total number of deaths, including those of people who died on Tuesday night after this piece was published. 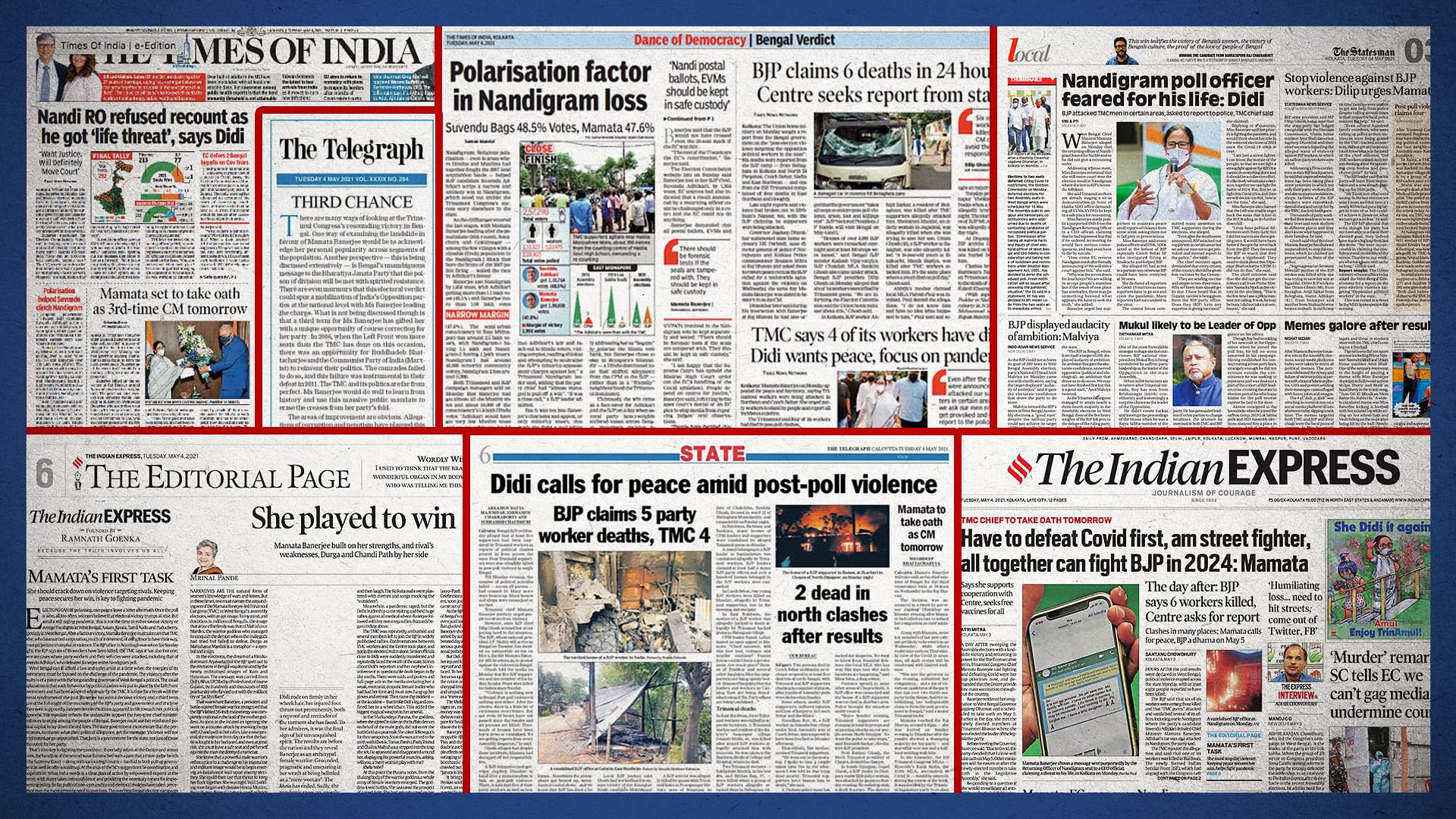