Single-digit votes in hundreds of booths: How the BJP performed in Bengal’s Muslim-dominated areas

Booth-wise results show how badly the party’s strategy backfired, with Muslim votes consolidating in favour of the TMC.

From zero votes to nine votes in over 40 percent of polling booths. That, in short, is the performance of the nine Muslim candidates of the Bharatiya Janata Party in the West Bengal assembly election.

Fielded in three state’s three Muslim-majority districts – Murshidabad, Malda and Uttar Dinajpur – these nine seats had 3,167 polling stations. In 1,289 of them, the BJP scored single-digit votes, even zero votes, as the booth-wise results of the election reveal.

But it wasn’t only Muslim candidates suffering this fate.

While we know that Muslims voted overwhelmingly in favour of the victorious Trinamool Congress in their bid to defeat the BJP, an analysis of booth-level polling data throws up some insight into the intensity of the Muslims’ voting pattern against the saffron party.

Muslims make up 27 percent of Bengal’s population, according to the 2011 census. The population is concentrated mostly in the districts of Murshidabad, Malda, Uttar Dinajpur, South 24-Parganas, Birbhum and North 24-Parganas. The districts together have 118 of the state's 294 assembly seats. Overall, political parties estimate Muslims can influence the result in about 80-90 seats in the state.

At Sujapur in Malda district, the BJP’s candidate, Sk. Ziauddin, got single-digit votes in 244 of the total 366 booths. In addition, he got zero votes in 19 booths.

Sujapur constituency mainly comprises the Kaliachak I community development block where Muslims make up 82.29 percent of the population, according to the 2011 census. The TMC recorded its highest margin of victory in Sujapur, securing a whopping 73.44 percent of the vote share and recording a winning margin of 1.3 lakh votes.

Yet the scene wasn’t much better for the BJP in seats outside these three districts, or where the party had fielded Hindu candidates in Muslim-majority seats.

Bhangar assembly seat in South 24-Parganas district is largely congruent with Bhangar II community development block where Muslims comprise 70.49 percent of the population, according to the 2011 census. The TMC lost this seat to Muslim cleric Abbas Siddiqui’s party, the Indian Secular Front. The BJP’s candidate Soumi Hati got single-digit votes in 151 of 373 booths, and zero votes in 17 booths.

Interestingly, though the BJP came second in most such seats, even the Left-Congress-ISF’s Samyukta Morcha did not tally up as many single-digit votes.

Minakhan assembly constituency is largely congruent with Minakhan community development block where Muslims made up 51.6 percent of the population, the Scheduled Caste groups 30.4 percent, and Scheduled Tribe groups 9.3 percent of the total population, according to the 2011 census. The seat is reserved for members from the SC community.

Amdanga in the same district is mostly congruent with Amdanga community development block where Muslims make up 58.48 percent of the population, according to the census of 2011, and the SC and ST population share stands at 18.2 percent and 1.5 percent, respectively. The TMC won the seat comfortably, securing 42 percent of the polled votes and a margin of 25,480 votes over the BJP.

At Metiabruz in Kolkata, which the TMC won by a massive margin of 1.19 lakh votes by bagging 76.85 percent of the vote share, the BJP got 16 percent of the polled votes and the ISF only 3.76 percent. However, when it came to single-digit figures, the BJP got them in 102 of the 330 booths and zero votes in two. The ISF got single-digit figures in 79 booths and zero votes in four.

The Congress has been winning the Sujapur seat since 1962 and pulled 58.46 percent of the polled votes even in 2016. But the sitting MLA lost his deposit, bagging only 10.73 percent of the vote share, as the TMC’s vote share rose from 30.18 percent in 2016 to 73.44 percent this time. Sujapur, political observers said, stood as a perfect example of the BJP’s “blunder”.

The BJP’s over-aggressive campaign targeting Muslims prompted a complete consolidation of Muslim votes in the TMC’s favour, resulting in the TMC’s victory in many seats where the BJP was a strong contender, said Biswanath Chakraborty, a professor of political science at Rabindra Bharati University in Kolkata.

“It was essential for the BJP’s win that Muslim votes remained split, more so because an overwhelming polarisation of majority votes hardly ever happens, whereas minority votes do tend to polarise when they feel threatened,” Chakraborty said. “The BJP’s steadily intensifying tone of anti-Muslim propaganda ensured minority consolidation behind the TMC, while the majority of liberal-minded Hindus also got scared of the BJP and stood behind the TMC.”

Ahead of the elections, the BJP promised a law against “love jihad”, implementation of the Citizenship Amendment Act and driving out “infiltrators”, and repeatedly referred to Muslims as “jihadis” and even ”Pakistan supporters”.

As Chakraborty pointed out, after four Muslims died in firing by central forces during the fifth phase of polling, BJP’s state unit president Dilip Ghosh and former national secretary Rahul Sinha even said that there should be more similar incidents and that the forces should have killed eight instead of four.

Baishnabnagar, neighbouring Sujapur, is another example of such polarisation ruining the BJP’s prospects. Here, Hindus and Muslims made up an equal share of the population, according to the 2011 census. The BJP’s Swadhin Sarkar won this seat in 2016 as the party’s one of only three seats across the state. Sarkar marginally increased his vote share from 38.2 percent in 2016 to 38.6 percent this time but ended up losing by 2,471 votes.

The same is the case with Manikchak in Malda district, where 56 percent of the population is Hindu. Here, the BJP had a lead of 30,000 votes, going by the Lok Sabha election trends, and was considered the favourite. The BJP had got 81,809 votes, while the Congress got 51,920 votes and the TMC got 47,785.

This time, thanks to Muslim consolidation behind the TMC, Mamata Banerjee’s party won the seat by a margin of 33,878 votes. While the BJP’s votes slightly reduced, coming down to 76,356, it was on account of the shift of the Congress’ votes to the TMC that effected this result. The TMC secured 110,234 votes, while the Congress was routed, getting only 11,555 votes.

The BJP’s candidates from Muslim-dominated areas had different replies when asked to comment on this voting pattern.

“We failed to convince the Muslims about Modiji’s slogan of ‘Sabka Sath, Sabka Vikash aur Sabka Vishwas’. Muslims did not trust us,” said Mafuza Khatun, a former CPIM MLA who joined the BJP in 2015 and is presently the vice-president of the BJP’s Bengal unit. She contested from Sagardighi in Murshidabad.

Mehebub Alam, another BJP veteran who contested from Bagabangola in Murshidabad district in 2011, 2016 and 2021, believes the TMC manipulated the counting.

“There was some kind of manipulation in the EVMs in the strong room,” he claimed. “My votes have increased from 2016 but I never got so many single-digit figures. Besides, without manipulation, how could the TMC also lead over us in several Hindu-dominated booths?”

Another candidate, who did not want to be identified, blamed the result on the panic over a proposed citizenship screening exercise in the style of the National Register of Citizens in Assam and the Citizenship Amendment Act.

The BJP’s Raghunathganj candidate, Gholam Modaswer, had no hesitation in saying that the party’s strategy backfired.

“In West Bengal, you can’t win by completely ruling out Muslim votes,” he said. “We not only tried to do that but our campaign also forced the entire Muslim votes into one bucket, whereas we failed to consolidate Hindu votes. What was the need for making such a hullabaloo over CAA and NRC if they were not going to be implemented before this election?”

Swadhin Sarkar, however, felt there was nothing wrong with the party’s strategy.

“It’s true that we did not get Muslim votes at all. I have never recorded so many single-digit figures like this time,” said Sarkar, the candidate from Baishnabnagar. “But you should keep in mind that the BJP is a party that keeps national interest above electoral ones. India needed strong medicines like the CAA and NRC. We failed because the Hindus did not realise the importance of unity. We hope they will understand it sooner or later.”

Interestingly, since the results were announced, a number of BJP workers and supporters demanded on social media (see this, this and this) that the party disbands its minority cell in the state, just like the party’s Assam unit did after the election results. 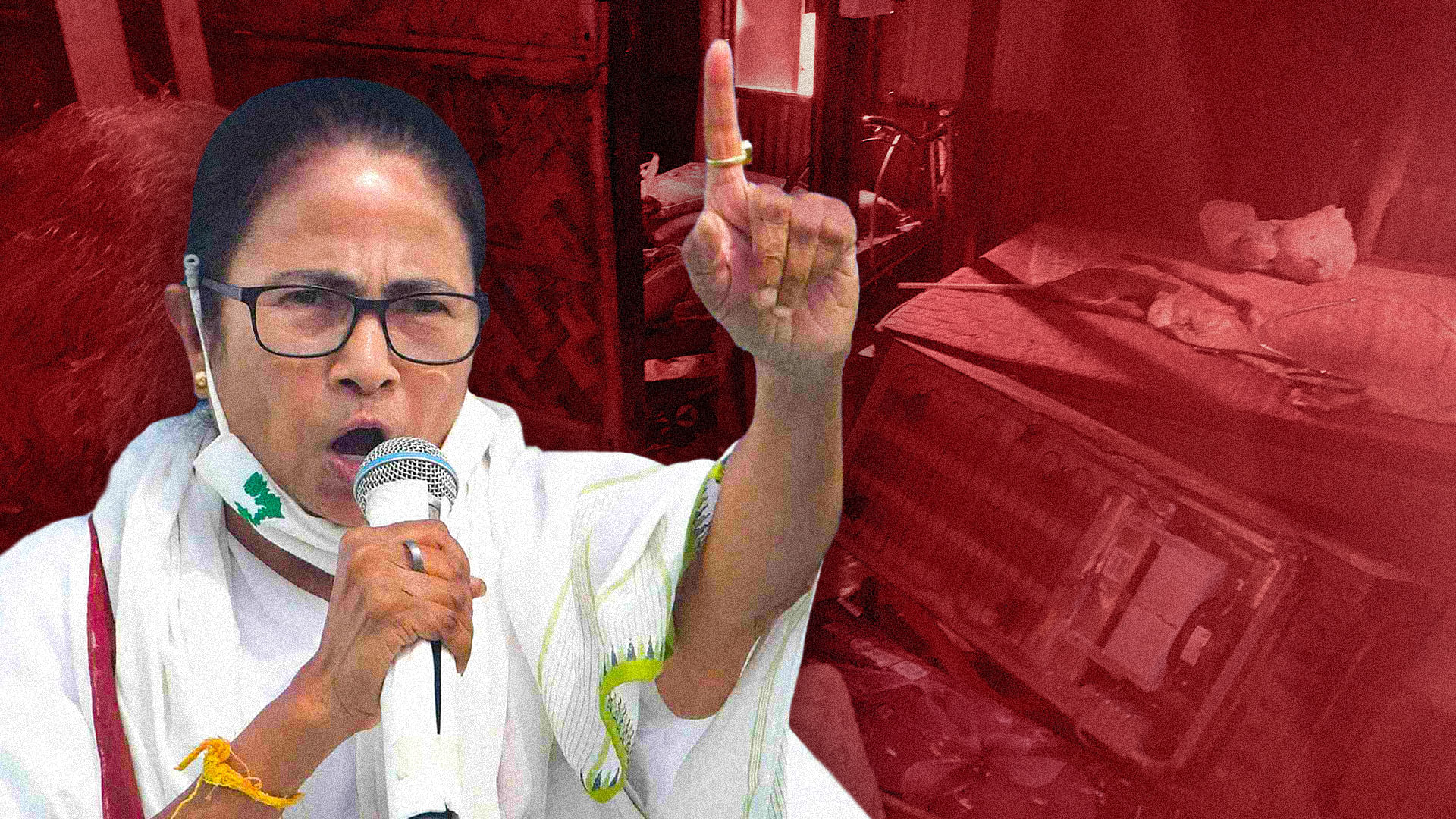